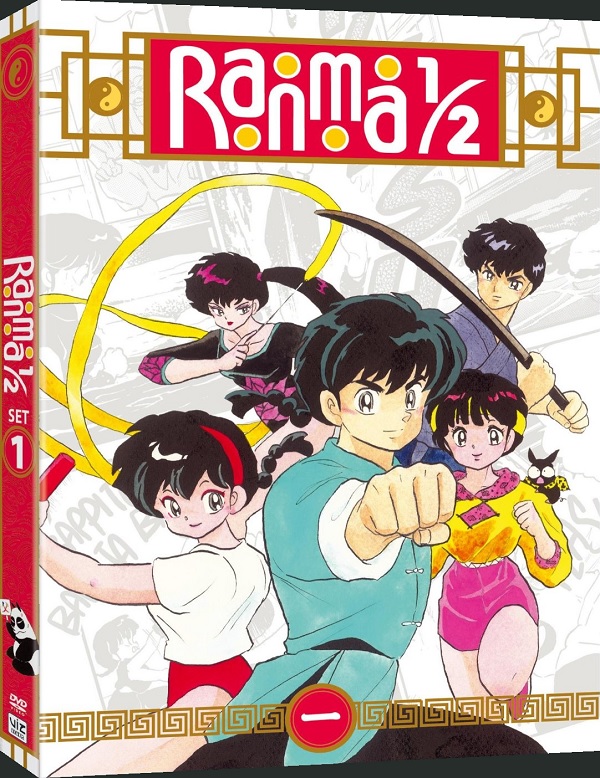 Overview
Anyone who has been watching anime for even a year and has explored beyond the standard shōnen type anime, has probably seen a work from Rumiko Takahashi. Whether it is the older Urusei Yatsura or the newer InuYasha, her works have had a large influence on anime as a whole and one of these works happens to be Ranma ½. Viz Media originally released Ranma ½ in the States many years ago, and they have just begun releasing the series again this time remastered for DVD and Blu-ray release. The question is, has Ranma ½ held up with age and does this DVD release warrant picking up the series again?

Story
The world of martial arts is a difficult one and in Ranma ½ it is also an incredibly strange one. With many schools of martial arts, the Anything Goes style of martial arts is certainly appealing and Soun Tendo has been keeping the fighting style alive while living in a household with his three daughters. He is hopeful however as his old friend and fellow fighter Genma has already agreed to give his son, Ranma Saotome, to the family and marry one of his daughters. 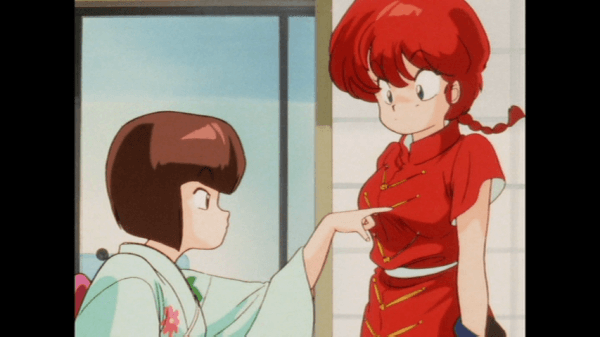 The only problem is, when Genma and Ranma arrive, Genma is a panda and Ranma is a girl. This causes a lot of confusion and frustration in the household before it is revealed that while these two were traveling through China and training, they came across a dangerous training ground called Jusenkyo. This training ground is full of springs but while this wouldn’t normally be an issue, each of these springs has a different curse and those who fall into the water are afflicted with this curse.

With Ranma falling into the spring of drowned girl and Genma landing in the spring of drowned panda, whenever they are doused in cool water they transform into their cursed form and the only way to bring them back to normal is to soak them with warm water. While this is already a problem in and of itself, Ranma and his fiancée Akane begin fighting with one another and arguing within a few hours of meeting one another with Akane always attacking Ranma due to his comments on her appearance or situation. 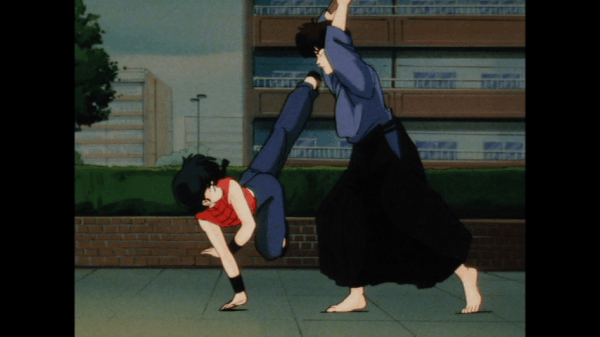 What may seem like an already strange romantic comedy keeps getting stranger as more characters are added into the mix. With Akane already being a popular girl at school, Ranma’s arrival on the scene brings the ire of many guys, including a kendo master who wishes to defeat Ranma any chance he gets, the only problem is he also falls in love with the female version of Ranma, making him want to kill one and kiss the other.

Add in gymnastically skilled sister with the exact opposite feelings, a rival from Ranma’s past with a curse of his own, and a powerful amazon chasing after Ranma for his head and then his heart, building up a harem of both women and men who are unaware of his curse. This is only the beginning of the strange and wondrous world that Takahashi has created and built upon in the first 23 episodes of Ranma ½. 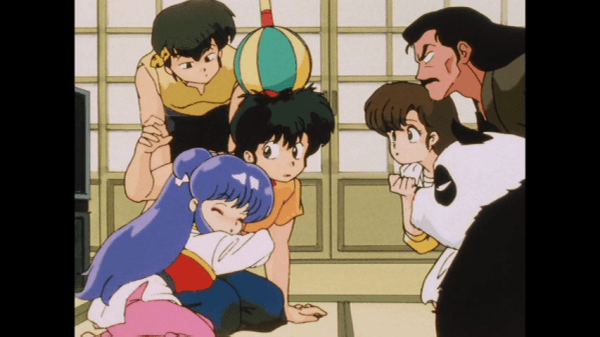 Ranma ½ is built upon how silly everything can be in this anime. The whole idea of the cursed springs is a giant running joke throughout the start of the series since water is literally everywhere in this anime. Characters dump water out of windows, water their lawns, splash puddles, carry buckets around that are perfect for accidents and there always seems to be a pot of hot water somewhere just when the situation calls for it. This results in numerous unlucky transformations for Ranma and the other cursed characters as they are often forced to hide or deal with hilarious situations because of their new forms.

This is one of many running gags that never gets old throughout this set and will likely continue to be strong in future releases. The same can be said for a world where martial arts are everywhere. This being a martial arts romantic comedy and all, everything has fighting techniques built into it. There are rhythmic gymnastic fights with modified tools, ramen delivery battles, Cat-Fu that involves acting and fighting like a cat and this is only the beginning. 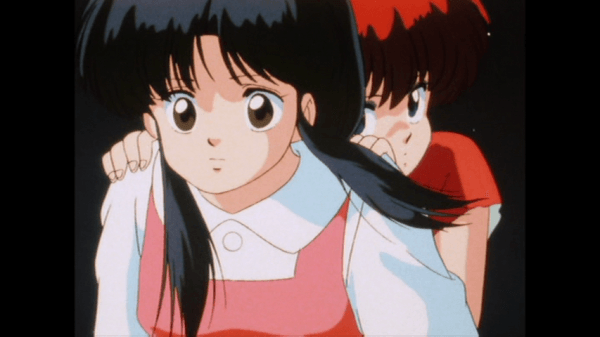 The best part of Ranma ½ is how light hearted and comedic everything throughout this first release is. There are a few mellow moments, and one unfortunate episode that is almost entirely recapping, but viewers will rarely find themselves not enjoying a single episode on this release. With the personalities of the characters working so well together and the numerous running gags set up throughout this release, Ranma ½ Set 1 does a great job introducing viewers to the world that has been built up and leaves them wanting more once it has finished.

Visuals
As you can see in the screenshots in this review, Viz Media is releasing Ranma ½ with the original 4:3 aspect ratio that the original series featured which means that there are no cropped scenes and nothing is stretched to look strange. Despite this only being the DVD release there is an impressive jump in quality of the overall look of the show with great looking colors and detail. 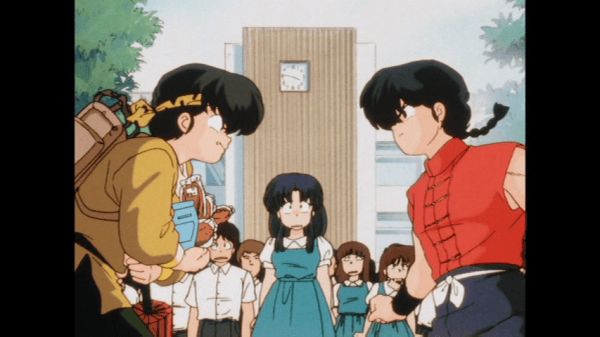 The art style of the series is obviously old but that does nothing to diminish how great this series still looks to this day, though a few scenes do look a bit rough at times. It is worth noting that there is some mild nudity here and there with girl-type Ranma’s breasts being exposed a few times, but it is nothing explicit and is generally played for laughs.

Audio
This release of Ranma ½ Set 1 does not feature any redubbed voice work which means that those who have seen the series in the past should know what to expect. This also means that the voice of the female form of Ranma changes a few episodes into the release. While such a change would normally be concerning, it is actually for the better as the original voice actress for female Ranma was rough and atrocious sounding and her replacement is better suited for the task , setting up the rest of the release with a solid English dub. Of course for those that prefer it, the Japanese voice track is also included in this release. 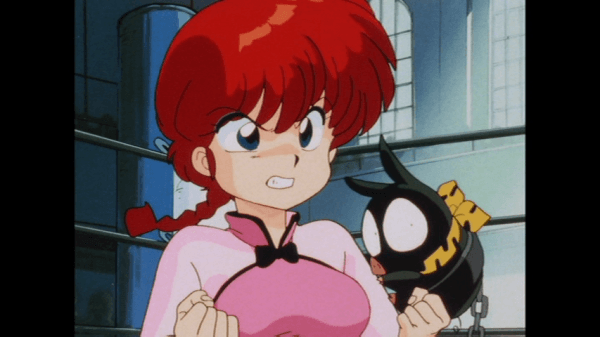 Now the background music in Ranma ½ Set 1 is used sparingly but to great effect since it is almost always used for comedic scenes or whenever Shampoo appears. As for the opening theme, this release actually shifts around a bit with the iconic opening sequence used for most of the episodes, though the last two episodes on the release feature only a narrated opening and a few in the middle of the release feature a different song. The ending themes are also changed around a few times in this set, but none of them are noteworthy in any way.

Extra
It is worth noting that this is the basic DVD release of Ranma ½ Set 1. This means that the release is very basic as far as on-disc bonus features are concerned, though it does come with a nice looking slipcover. The aforementioned on-disc extras are a three minute clip of NYCC highlights and trailers for the InuYasha movie collection and InuYasha: The Final Act.

Overall
Rumiko Takahashi’s work has proven that despite nearly twenty five years passing since the first episode was released, her work still can thrive in today’s market and Viz has done a wonderful job with this release of Ranma ½ Set 1. While this DVD release may be a bit thin on extras and not the best upgrade compared to the Blu-ray version, it is still an impressive jump in visual quality and one of the best ways to start, or revisit, a classic series with an incredible start that will not disappoint.