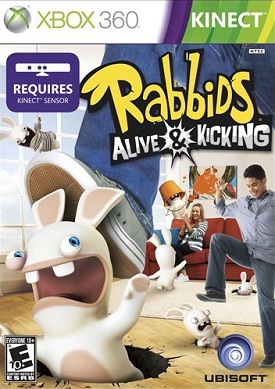 Overview:
The Rabbids series is undoubtedly Ubisoft’s best known franchise for party games. And why wouldn’t it be? Previous titles have made very interesting and creative uses of motion control and touch pad technologies available on the Wii and handheld systems. A series quite successful in its own right that Rayman himself must regret letting these mischievous little buggers take his spotlight in the gaming world. The appeal of past games have often been attributed to the unique and downright wacky sense of humour, and relatively easy-to-grasp gameplay that have entertained hardcore and casual gamers alike in party situations or social gatherings.

Now the Rabbids have been given another opportunity to entertain players in an entirely different way. Replacing that old and increasingly dusty Wii remote with the motion sensor technology of the Xbox 360 Kinect. Now, it’s no secret that the Kinect has had more than its fair share of poor quality titles due to the inconsistent nature of control schemes and adaptation from game to game. Ultimately it lends itself better to the party game genre. So as a result of putting two and two together, Ubisoft’s latest outing of the Rabbids series: Alive & Kicking, makes its Xbox 360 debut on the Kinect. The question is, will the game deliver a new kind of interactive and humorous gaming experience, or will it sink into the Kinect’s exponentially growing pit of “meh”.

Story:
So once again, the Rabbids have gotten up to some new form of no-good again. The story is loosely based around the usually structured random mishaps of messing with cloning technology after being trapped underground. The plot is an extremely loose mess of animated cut scenes that is centralised around the idea that the Rabbids have begun invading the human world through use of the Kinect. And that’s really all there is to it. No big villain, no climatic themes or situations. Though it is interesting to internally debate the role of the Rabbids as good or evil (given their origins as Rayman’s enemies), the story is negligible and hardly worth the attention of the player. 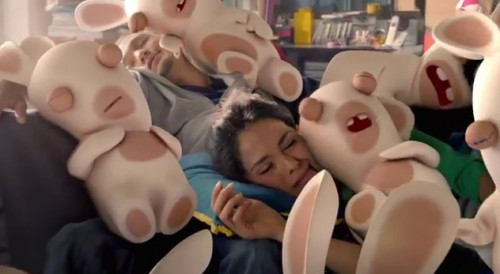 Party games have never been about delivering strong story. Take a look at Mario Party, Kinect Sports and the Mario and Sonic Olympics series. This point has proved in the past that story is not essential to success in a party game genre. Adding a story only serves to provide transitions from one aspect of gameplay to the next. Sometimes people just want to sit down and play simple little mini-games (or ah… stand up… as it were in this case…)

Gameplay:
The ever so important facet of party games: the gameplay. The formula of success tells us that a game will sell and play well based on a few different features that are added to the gameplay mix. Inclusion of iconic characters; the level of innovation in the games; the relative ease of use; and functional multiplayer.

The first facet is already handled well. For a game series that has its roots deeply cemented in party game territory, the transition from one motion control scheme to the next is essentially a no brainer. And the Rabbids do lend themselves quite well to the idea of Kinect interaction. Being able to squish, push and wack these little pests in augmented reality does project a strong degree of appeal.

The level of innovation of some of the games is quite clever, while others lacking and downright repetitive. The mini games themselves are actually divided into 2 different sorts of mini-games. There are the short, cut-away lab test style mini games, which make the players perform ridiculous animated actions such as licking a cake off a Rabbids face, or imitating a cheerleading dance routine for others to copy. The second form of games is found in the player inclusive augmented reality mini games, where the player is actually interacting with the Rabbids in their own room. Whack A Rabbid is one example of these, a humorous take on the classic whack-a-mole game where players must step, kick and swipe at Rabbids as they clutter the players floor and screen. Overall, the design of most of the games is enjoyable, but not for sustained periods of time. There are games in the mix that have been tried before, and have failed in their respective games. The game Silou-Wet is a strong reminder of the failure of ‘Hole in the Wall’ where the player or players have to imitate a shape in loose and awkward positioning of limbs, akin to that of playing Twister. Only time there’s photo evidence. The notions behind games like these are just plain awkward at points. Plus I would like to think that most players would also find the idea of the licking mini-game more than a little creepy. 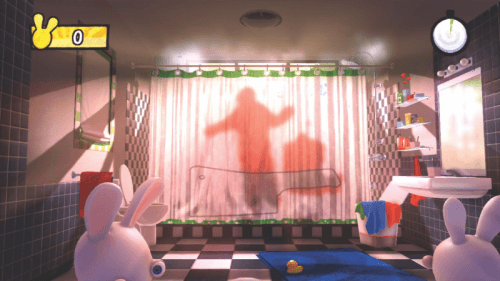 One of my favourite parts of the game’s innovation is similar to one that was included in Rabbids Go Home, a previous Wii title. The Wii game featured a small humorous interactive mode where the player sees a Rabbid trapped inside a Wii remote. Upon tilting the remote or pressing random buttons, the player soon discovers the Rabbid housed within is getting tossed around like a rag doll in a cement mixer. The idea of smacking around one of these little buggers appeals to everyone’s inner sadist. In that spirit, the game also includes a mode called My Raving Rabbid, which drops a Rabbid into your living room. Player can then interact with a variety of props bought from the in-game points store as well as, naturally, smack around the little critter to their hearts’ content. This mode provides for a fun distraction in both solo and multiplayer outings.

However, the game’s biggest downfall is easily the control scheme. Yes once again, and to nobody’s great surprise, the awkwardness and inconsistent quality of game control associated with the Kinect plagues what would be an otherwise relatively enjoyable title. This is not to say that the game is broken by any means. However, players will find many mini games an absolute pain to play at points. Two games that were the absolute bane of my play time were Hacked Off and Guitar Zero. Once again, a Kinect title falters in that the control system consistantly fails to recognise the actions or intentions of the player. In Hacked Off, which is a take on the old ‘sawed in half’ magic stage trick, the Kinect often outright refuses to acknowledge the movements of the players. It is not so much the lack of recognition that annoys me about the controls of the game, but rather the inconsistency. Some games, such as the afore mentioned Silou Wet, and Whack a Rabbid are highly responsive and relatively easy to complete, but it is the fall down of other mini games that makes the experience all the more frustrating. Gamers like their experiences in party games to be easy to pick up and easy to play. The game essentially sabotages its own longevity by providing mini games with such frustrating controls that even people in social gathering would not want to touch. 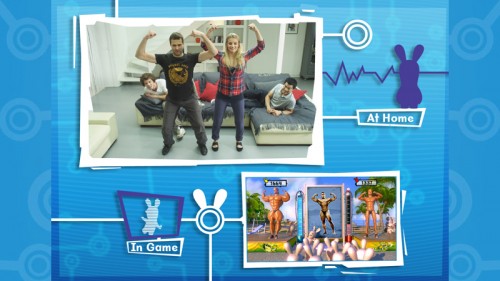 The final aspect that should be observed is the multiplayer. Unlike many past Kinect titles, Rabbids Alive and Kicking is the first to introduce complete 4 player party game play. In fact, the game even offers a team tournament style party mode which is able to register up to 16 players at once. Bear in mind that all 16 people won’t be playing at once. The game’s structure is turn based where players must perform certain actions co-operatively to complete the mini-games task for the most points.

As a party game, the multiplayer feels solid. In fact, it feels more solid than the single player. The ideal party game is one which promotes multiplayer play rather than single player outings. While obviously single player is possible, multiplayer is encouraged. Again however, the downfall is the self sabotaged longevity. As a game that is directed to be played in social gathering situations, Rabbids is far less likely to see as many gameplay hours as the newest FPS or RPG releases of 2011. It’s not a bad game, but it once again highlights the frustrating nature of an increasingly frustrating motion control system.

Audio & Visual:
The visual aspect of the game is about what one would expect from a Rabbids game. The cartoonish charm of the little critters themselves still evokes both feelings of like and intense hatred of the Rabbids. Their cute and wacky stunts on screen make them all the more appealing, but the degree to which the mock and ridicule the player for their failures makes them an all too juicy target for a potential squishing. What the game does suffer from however is the same thing that many would find with the Kinect technology. The player screen is just far too busy much of the time. For players, attempting to co-ordinate their own movements to match those required of them on the screen with a real time playback visual also in effect, the rapid influx of this much visual information will make it hard for players to focus on . Simplifying the HUD down would take much of the visual stress away. One other notable digital downfall is the Kinect’s lack of ability to detect inanimate objects in the room, and often players will find the Rabbids onscreen breaking the notion of reality by moving in and out of furniture in the player’s living room. As small issue, and at this point, to be expected with the Kinect, but still something that deviates from the central entertainment value. 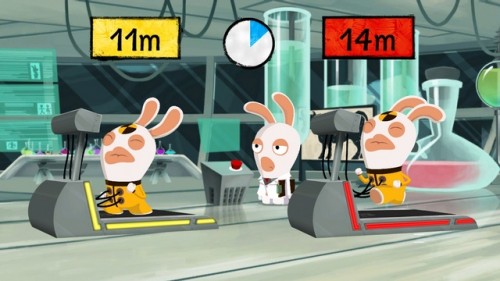 The sound affects and music add to the cartoonish charm, featuring the Rabbids trademarked crazy scream “BWAAAAHHHHHH!!!!”, as well as a cacophony of funny splat, wack and crashing sound effects to compliment the child-friendly nature of the game. Mind you, many of the sound effects are direct ports from previous games, but the sense of consistency is still there. Ultimately as a party game, players won’t expect the game to provide anything that is visually or audibly ground breaking, but for players of previous Rabbids titles, expect more of the same.

Overall:
Rabbids Alive and Kicking is not a game to be played on one’s own. As a party game on the Kinect, I do have to say that it is one of the stronger entries in an otherwise bland and frustrating market for motion controlled 360 games. At its best, this newest Rabbids game will bring people together to laugh at the Rabbids’ wackiness and laugh at each other for pulling such stupid poses. The gameplay is appropriate for the genre and not too difficult to learn, just difficult to master at some points. At its worst Rabbids AaK will frustrate the players, but with other people around, it will naturally seem like a silly thing to get worked up over. Some refinement might be necessary with the controls before another outing, but as it stands, Alive and Kicking is still a good way to entertain groups of people who are looking for small, stupidly silly bursts of fun.