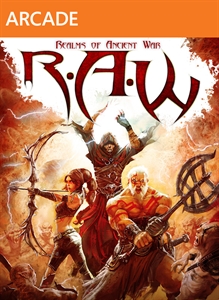 Overview
Identifying a strong hack-n-slash title involves several characteristics. For myself I believe that the title should include a cooperative multiplayer found in games such as Gauntlet or Champions of Norrath. These titles exemplify the embodiment of aggressive competition as well as purpose to reach a common goal. Character growth also is a main selling point, as a player should notice an increase in abilities (passive or active) throughout their journey. Without advancement or competition/goals players are unable to take part in a rewarding hack-n-slash game. Let’s find out how well R.A.W. fits in the mix…

Story
Realms of Ancient War has a strong outlining concept for its story, but the execution with gameplay can leave players bewildered or perhaps slightly angered. In summary, the overarching theme concerns four separate realms – cardinal directions – that have once been warring factions but sought peace. During a meeting of the four kings, a great evil appeared causing the Northern king to vanish and the three remaining kings totally messed up (amnesia mixed with Tower of Babel disease). The player is guided to the last place the Northern king was seen and meets his spirit. Imparting the gift of incarnation, the player carries the spirit of the Northern king in effort to restore his body by first activating the portals of each realm.

Time to mess the story beyond FUBAR. While being charged to enter each realm to activate the portal, you actually have to kill the denizens of each realm. While I can see how the dwarves and elves might be reluctant to let anyone in their borders, I fail to see how you would need to slaughter human mobs in the Southern realm as you hold residency there. Albeit, the game does throw the word “bandits” around in order to make you feel a bit less sinful in your slaughtering. Eventually, you are tasked to set off through the realms an additional time only to have to reach the king of each realm. However, this time you are killing off the good folks defending their king which left an even sourer taste in my mouth. Surrender yourself for diplomacy? No one is safe from rigorous hacking and slashing.

While the story has its defining moments of deception and glory, gameplay interferes with its effectiveness and nulls morality as you become essentially an assassin only to redeem yourself at end-game. Nonetheless, not everyone plays a hack-n-slash title for the storyline.

Gameplay
An important aspect of gameplay to note is that players may switch between two different skill sets in a moment’s notice during battle. Each set has four sections open for any of the character’s available (active) abilities. Some active abilities can be upgraded into focus abilities which require the player to hold a button instead of a quick tap. An example of this is a character’s ability to use “fast healing” by quickly tapping the appropriate skill or if upgraded to “renewal” to gain poison recovery as well as healing by holding the skill. It is well worth to note that it is possible to use the upgraded skill first and then immediately perform its preceding ability. Thus, “renewal” could be cast then immediately follow with “fast healing”. Using “fast healing” first will cause a cooldown for the the upgraded skill. 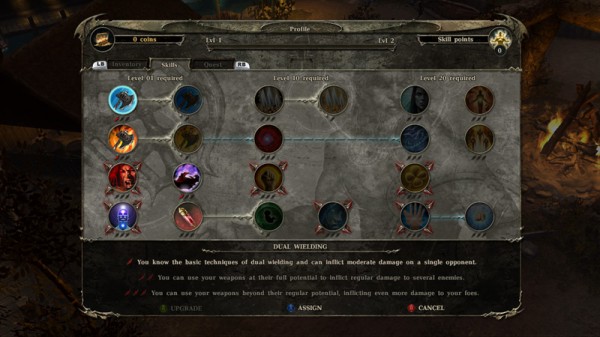 To build both of your skill sets, a tree hierarchy is available to upgrade upon gaining skill points from leveling up. One skill point is given per increased level and can only be used in available tree tiers. The first section of the tree hierarchy allows a player to begin training abilities like “fast healing” and class driven skills – basic melee or range attack. The next tier unlocks at level 10 and allows for a character to learn more advanced skills and become more powerful. Spreading out skills can provide a well rounded character but focusing points on attack skills will enhance damage and effectiveness. Advancing a rogue’s poisonous trap skill will provide a greater range of effect as well as the amount of damage it dishes out.

Statistics junky? If you have become overly sensitive when attributing character stats like strength and dexterity, you will be constantly comparing weapons and armor. First you will have to decide what stats are most important for your character build. Wizards do not need bonuses yielding from strength, so acquiring an amulet that boosts strength would be a great option to sell at the next merchant. On the bottom left portion of the inventory screen you can view statistics for your current armor/weaponry and actively see how new items affect your build by highlighting that item. Green areas will show what stats have improved, and red will highlight those that have been reduced. Any grey areas are stats that are unaltered for the highlighted item. 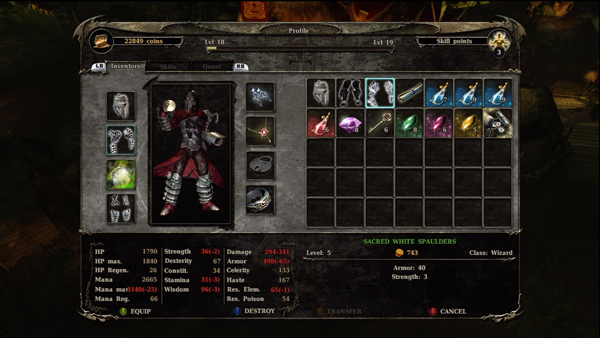 Realms of Ancient War is infested with a small variety of enemies, yet an overwhelming population is spiders and demons. No matter what realm you travel to you will certainly cross paths with a spider. Normally these tiny creatures swarm out of egg sacks lying around in caves or forests even if the sacks are destroyed prior to their spawning. Providing little experience, spiders act more as fodder than damage dealers. a similar notion can be said regarding demons. At specific intervals these other worldly denizens are spawned at your current location. If not dealt with swiftly, they can easily overwhelm you. Combine melee attacks or close spells with AoE (area of effect) abilities to thin their numbers.

Remember the mention of incarnation in the story’s plot? Allowing the Northern kings spirit to flow with you enables you to perform an incarnation with a large foe. Incarnation places you in control of the targeted creature and allows you to perform its basic attacks against your enemies. Once you notice that a creature has a shiny aura beneath it with (LB) above it, you will be able to incarnate. Take over a troll to swing powerful fists into the earth or a stone statue to cleave opponents with a large sword. Keep in mind that if you transform into one such creature, do not expect to gather loot from it as it mindlessly falls to the ground. Way the options of getting potentially rare loot or enjoying the hard bashing fun of a large creature. 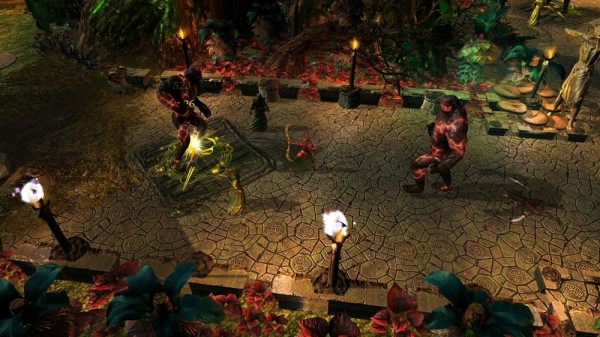 Single player is limited to a choice among a human fighter, wizard, and rogue. Considering there are elves and dwarves through into the mix, I would have thought that perhaps these races would have been available. However, you are only able to be a human starting from the Southern realm. Having the race limited to only humans reduces the game’s replay value as it could provide more achievements and new starting missions.

During single player gameplay, players rely on soulstones to revive themselves when die. This will respawn them to their previous checkpoint. Keep in mind that a total of 9 soulstones can be carried, and that once all soulstones are depleted the level restarts. However, two player campaign allows a five second interval when one companion dies. As long as one player is alive during the five seconds the other player is able to resurrect.

There are a few objects that appear to hold importance through the game but are relatively useless. One such object is the Kilthi shrines located across the realms. These shrines refill health and mana but are rendered useless due to easy potion access and regeneration rates. The only purpose these serve is to provide another achievement for collecting five of them. Gems and keys from each realm at first look like they could hold importance but merely only carry their weight in gold. While keys normally unlock chests, these keys apparently have more value with the vendor than being a gateway for treasures.

Audio/Visuals
Concerning audio deriving from individual characters, the vast majority was delivered by sound effects rather than voice acting. During the in-game cut scenes character portraits are used alongside written dialogue. Given the circumstances of this fast paced genre, written dialogue would be preferred rather than encapsulating lengthy voice-overs to ensure unhindered battle raging. Ergo, the lack of audio during cut-scenes actually provides an enhancing characteristic. Players can either read the dialogue or jump into the fray with no regard.

For a low cost title the models and textures appear well done as far as graphics are concerned. Whether the acting player is facing a troll, beholder, werewolves, or giant spider the textures fit very well with given environment. Though it may seem commonplace in today’s world, having armor altered from inventory to active battle makes any title more appealing and customizes a player’s overall experience. 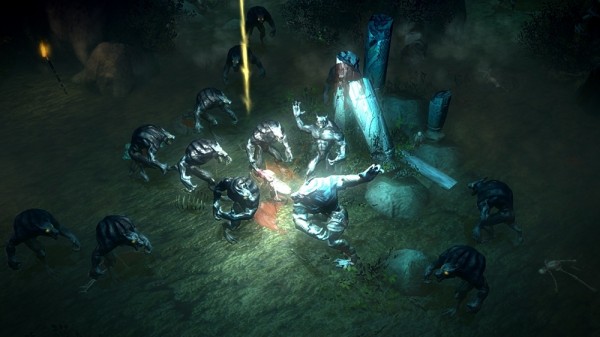 As amazing as the visuals appear, at times exploring can become frustrating due to environmental effects in junction with the user interface. For instance, when you begin the game as a rogue, you will find yourself in a darkened forest scene where enemies are not clearly visible. Tinkering with the brightness under game options will cure this problem. Yet even with the altered brightness, hack-n-slash titles are well known for visual dyslexia (believing a character to be where they are not). A simple addition that could be instilled to help with this problem could be colored character rings.

Overall
Holding the title back is the poor execution in storyline and saved content for two player co-op. The overarching themes with deception and perseverance provide a good foundation, but further inspection shows that common reasoning is not offered here. Obviously a king would not see an intruder that kills his personal guard! Those that are seeking to play offline co-op campaigns should understand that the second player identity does not save. An easy work around would be to transfer gear to the first player and at least save the gear while not saving the character.

Realms of Ancient War undoubtedly delivers a hack-n-slash experience that players are able to play through at a fast pace. With quick switching skill sets, the title is a bit more flexible when considering ability combinations and combat readiness. Furthermore, R.A.W. is available at a relatively low cost that can be considered a steal for many action RPGs.