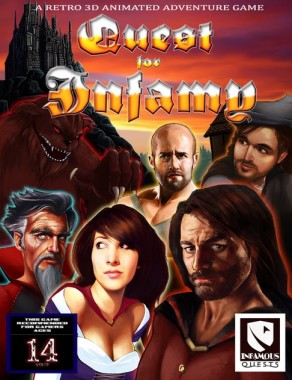 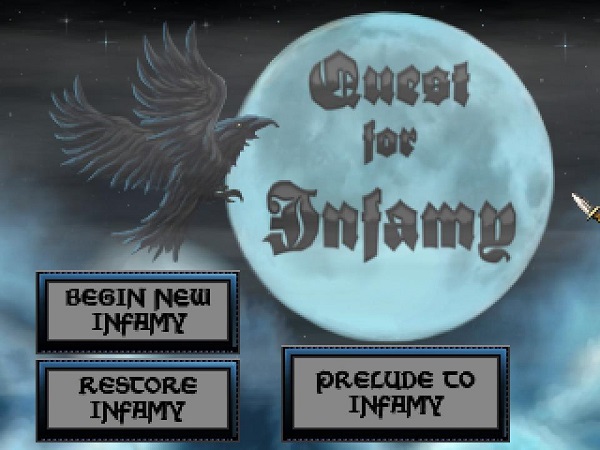 Quest For Infamy is a comedic, turn-based RPG that provides players an entertaining twist to the RPG genre with its snarky comments, intriguing voice-acting, and overall entertaining content. Developed by Infamous Quests and published by Phoenix Online Publishing, the company who brought to life Moebius: Empire Rising. The game plays similarly to the old-school RPGs of the past, and if you enjoyed that type of gameplay, you will definitely enjoy Quest For Infamy. The point-and-click RPG embraces the darker, badder side of morality, and the game pushes you to slowly seek out your cunning, wily nature and create mayhem and havoc. Gaining infamy is the name of the game, and making stupid jokes and snide remarks will lead you down the road to success in Quest For Infamy. 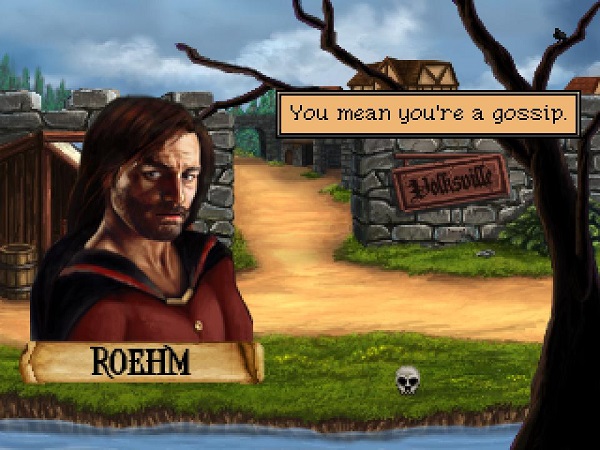 The game is similar to the old-school style RPGs. With a variety of options to utilize, you can control Roehm, the professional “raconteur”, to converse, observe, and attack certain objects and NPCs. Everything in this title is controlled through your mouse, so you can put your keyboard hand to rest. Lots of options allows a player to fully become immersed in each scene, allowing you to completely envelop the dialogue and commentary that is being chucked your way. Players can choose to walk, jog, or run as they progress through the graphically simple levels. You also have the option to converse with the NPCs scattered throughout Quest For Infamy. This is done by selecting the chat bubble icon when you scroll near the top of the screen. Alternatively, you can right-click your mouse until you  reach the chat bubble icon. Another option is to interact with certain things, whether they be doors, corpses, or anything else you can think of. This icon is depicted by a hand pointing at something. Observing certain things is also an option by clicking the Eyeball icon, which will provide you with a detailed, if slightly humorous explanation of what your character is looking at. Lastly, you have the option to attack thins, which is seen as a sword for your mouse icon. You can also choose a class after the first few minutes or so of the game, completing quests to earn your certain class, whether it be a brigand, rogue, or sorceror.

Gameplay is pretty basic. You control Roehm and manipulate him into gaining infamy in all the realm. Interacting with NPCs, completing adventures and slaying monstrous foes will slowly increase your infamy. In the beginning of the game, Roehm steps off a wagon and chats a little with the kind heart that drove him all the way to the town of Volksville. It was there that I realized that Roehm has a Scottish accent, and is quite witty himself. The  conversations held between the two characters is interesting and sets the story up nicely. One of the main things that I enjoyed about playing Quest Of Infamy was its choice of voice-acting. While I would usually put this under the Graphics & Audio section, I felt that the voice-acting really lent itself to the gameplay overall, even with its flaws. I’m not much of a fan for voice-acting, and generally I tend to avoid listening  to the voice-actors as they try to convince themselves and their audience that they’ve been mortally wounded. That was not the case with Quest Of Infamy. If anything, the audio is needed to complement the gameplay. The voices used and the dialogue that they have creates a lighthearted atmosphere that makes the experience all the more enjoyable. 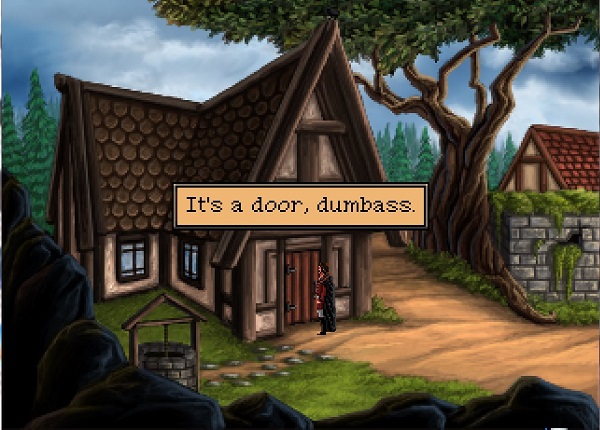 It was a little difficult for me to adjust at first, as I personally like to rush through gameplay. I found it unbearably boring, so I changed my tactic and decided to really read and listen to the dialogue and play through the game slowly. It opened up a completely different side to the game and I easily spent a few hours on the game without even realizing it. The game’s text is hilarious, and sometimes you’re caught off-guard by the witty remarks the developers throw at you when you accidentally press on something. I remember during gameplay when I wanted to walk through a door, I accidentally had the Observe icon activated, so instead, I received a message that said “It’s a door, dumbass” in a sarcastic tone. It was hilarious and I couldn’t help but smirk, even while I was sitting on an airplane filled with people. If you’re looking for comedic relief in an RPG title that also gives you a slight challenge, look no further. 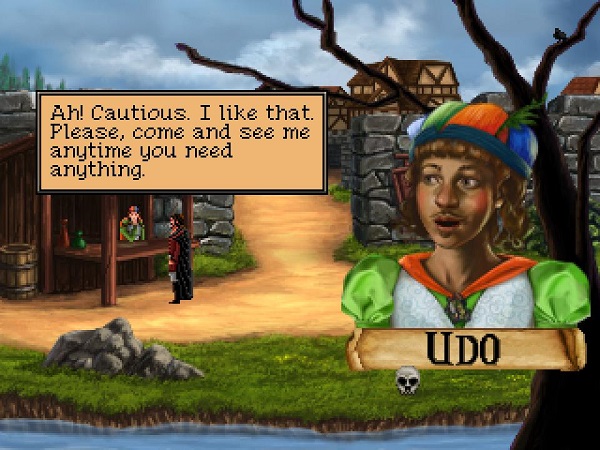 Visually speaking, Quest For Infamy does exactly what it intends to do. It doesn’t aim to be the most graphically advanced title, but it does provide the right amount of spunk needed to entertain players completely. The artwork is a little bit blocky, but it runs smooth enough and is actually kind of pleasing to look at, though I can’t imagine players with larger screens enjoying how pixelated the game looks. The music in the game is nothing extravagant, but it captures the lighthearted mood that the title is supposed to bring. The voice acting was also pretty entertaining, even though there were some slight issues with the voice acting that turned me off a bit. Other than that, I thought the voice acting was pretty necessary in creating a full experience for players as they make their way through the game. 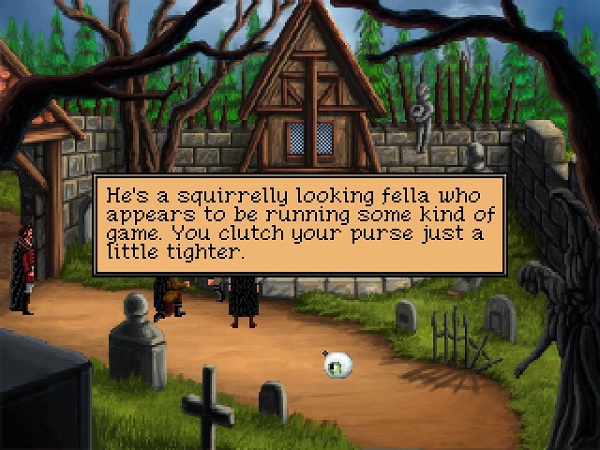 All in all, Quest For Infamy was an amazingly well done title that kept me hooked for a good amount of time. Quest For Infamy is almost an ode to old school games that certainly does not take itself to seriously, which makes it all the more entertaining to play. The hilarious commentary and interesting gameplay makes it a definite pleaser for old school RPG enthusiasts. While there were some small issues with the game, none of them were horrible enough that I couldn’t overlook them in the general scheme of things. I enjoyed the game immensely and I’d urge anyone interested to get the game and get ready to spend some time laughing and racking up your brain figuring out a solution to the adventures that will be thrown at your face.