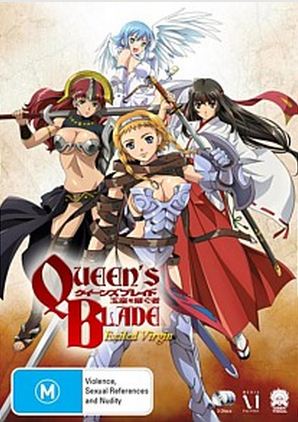 Queen’s Blade: Exiled Virgin is an Anime based on a visual novel that has had many iterations and actually a couple story sequels too. It mixes adventure, fantasy and eroticism that definitely targets a certain type of Anime fan. The story follows royal daughter Leina in her quest to be victorious in the battle of the Queen’s Blade but you’ll read more about that soon. As stated in the rating, Queen’s Blade: Exiled Virgin is full of violence, sexual references and nudity and is really not for the younger audience. This is the first of the series’ many Anime titles and, essentially, it works as the kicking off point for the rest of the story, if there’s anywhere to start on this Anime it’s right here. 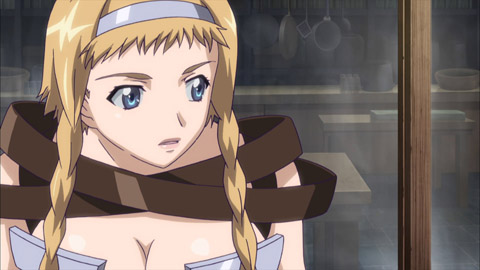 Queen’s Blade: Exiled Virgin follows the adventure of Leina who is part of the royal family that has a fairly wide rule in the land that the series is set in, she’s in constant need to escape from the family and actually does so many times before we’re actually introduced to her. She eventually does escape with a thief who captured her when she escaped previously in the hopes that the royal family will reward her. Leina travels with Risty the thief and finally gets a glimpse of what life is like outside of the walls of the royal castle, she sees that the world around her is full of poverty, disease and downtrodden people.

She hears of a tournament called the “Queen’s Blade” where the lands best female fighters come together to do battle, the woman who wins gains ultimate control, power, wealth and basically whatever else you can imagine. As you can probably already tell; Leina plans to enter the tournament, win and finally have the power to change the land for the better. The story is actually very interesting and, to a degree, very in-depth but had it been done differently it would have been so much better. Had a storyline of this calibre been placed within an Anime series that wasn’t made with the intentions of getting an audience, let’s say, “excited” I could imagine it being something incredible. 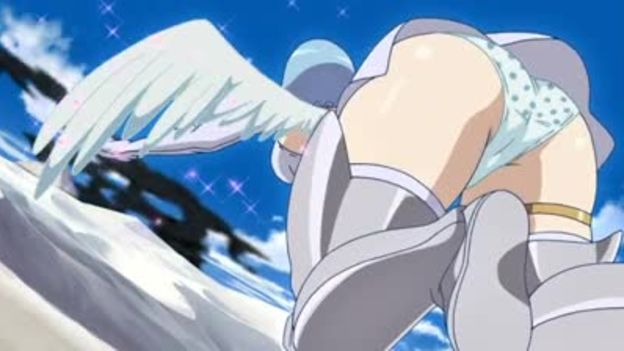 The story is almost pure adventure and what I enjoyed about it was that adventure. Leina travelled through a few different lands which were all based on different areas of the globe, she came from a section of the world that closely resembled Europe, she met fellow female fighters that came from an area based on ancient Japan and she even fought an enemy in what seemed to be a very authentic-looking pyramid reminiscent of those in Egypt, so I wouldn’t consider the landscape of this series to be a boring one but, once again, if it wasn’t filled entirely with fan service it may have gone down much differently.

All the characters were two dimensional, they had these one-track minds and they were all hyper sexual, none really showed any qualms about being mostly naked. Leina did show embarrassment at first but she soon came to, essentially, not give much of a damn at all. There were a lot of scenes that were unnecessarily sexual and other which, had a male been thrown into the mix, would be considered extremely distasteful and out of line. There was basically only one male character and he only ever popped up in maybe three or four scenes, all other side characters were simply bumbling idiots or, once again, very perverted. 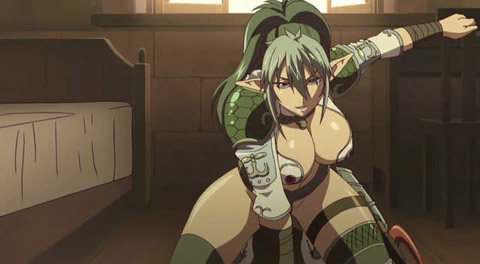 Without getting too much into the details of the story, it did leave on a cliffhanger that was extremely cool, possibly the best scene of the show was the ending scene, the way they executed that was actually really well done I just feel like they should have done that the whole way through. There was so much they could’ve done with the backstory and the stories of the individual characters but instead they chose to focus on the sexual tension between them all.

There was some backstory for certain characters, it turns out they were the characters that actually kept their clothes on the whole time, but it was minuscule and when compared to the rest of the series was highly insignificant.I’ll look at it from a different perspective: For those out there who enjoy this type of thing, there was just enough story to justify what happened throughout the series. All the fights that began with the reveal of one or both breasts of the female fighters all, in a way, made sense according to the story. I’m trying my best to see this from every angle but it has already gotten difficult. 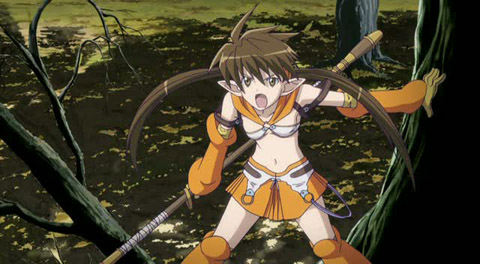 Queen’s Blade: Exiled Virgin is an older series so I never really expected as big an animation level as titles released in 2013 so I went in with a, let’s say, opened mind about how it would come across aesthetically. It’s animation is good at best and, while it seems to get better during certain combat scenes, it stays mostly average the whole way through. Unfortunately the next point I want to make is more of a backhanded complement than anything else: The costume design is actually very impressive on some of the characters, the backhanded part is that most of these characters wear barely anything.

Certain costume themes are fantastic but it is taken away to a certain degree when armour is basically just a small chest plate and a tight G-String. It varies from character to character, Leina’s design would have to be my favourite because, while still skimpy, it does actually resemble real armour whereas the others are just designed to simply “excite” the audience. It is clear that all of these costumes were designed to show as much of these ladies’ bodies as possible despite the fact that they are in a constant flow of danger and battle, it is fan service to the extreme and I’m sure people that enjoy that kind of thing will absolutely love the ways these characters and their costumes are designed, I just found that it was far too overboard. 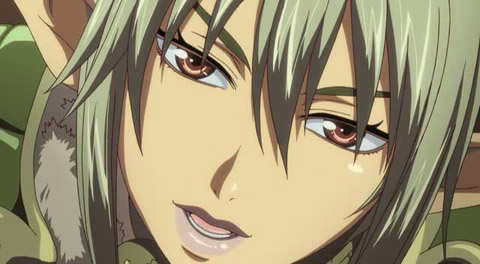 It’s unfortunate to say but a great deal of the audio in this release was all too forgettable. The music fit fairly well but it felt as if I had heard it all before, almost like it was a general set of tracks that had been used in other releases similar to this. I’m sure that wasn’t the case but it just didn’t feel like the most amount of effort could have been put into it, in saying that though I will give the series points for having a score that fits well despite the different styles and themes that continue to shift and change throughout the series. The voice acting throughout the 13-episode series was, once again, fairly good.

Much like a lot of other similar titles it seems as though only a few voice actors made their mark while a great deal of the others were just unlucky enough to land bland or infinitely annoying roles. Thankfully the best voice acting in the series came from the main character, Leina, so we’re lucky enough as an audience to have to sit through her dialogue a lot more than the others. I dont really think these actresses got a chance to do the best they can considering most of the characters were laughably serious, sarcastically cute, overly sexual or just straight out moaning. I can’t imagine these being the best roles to make s voice acting impact. 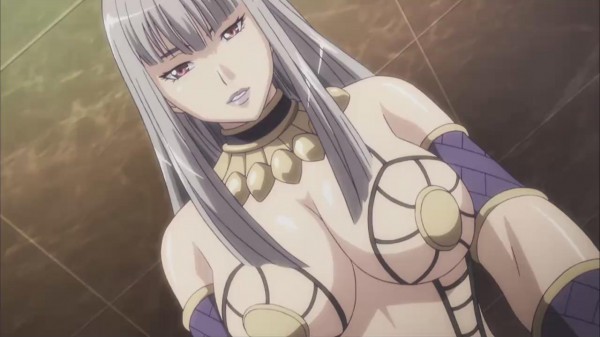 I will give credit to the fact that this release came with a great deal of sweet extras that I can imagine fans of the series will really get into. It comes with the usual stuff like Anime trailers, TV Spots, clean opening and closing sequences, but it also comes with the series’ four OVA episodes alongside Voice Actor Interviews and footage from the Tokyo Anime Fair. I actually enjoyed watching the extras moreso than I enjoyed watching the actual series and that was strictly on in industry basis, I enjoyed seeing the behind-the-scenes stuff like the Voice Actor Interviews and what not. I feel as though, had the series been executed a bit better, I would have enjoy the extras a great deal more but that’s just obvious. There’s no physical extras but I can’t take points away for that because it is simply a standard release. 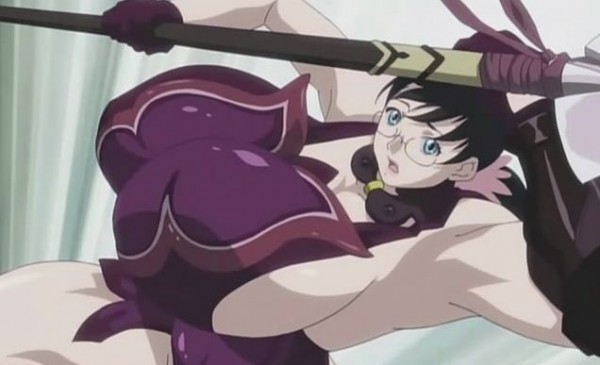 Queen’s Blade: Exiled Virgin is what it is, that’s the most simple way it can be put. It has traces of action, a great deal of adventure and enough eroticism to make a pornographic film jealous and while it didn’t quite work for me it may work for many others and, I guess, I can see how. I’ll say it right now; don’t bother getting into this Anime if you’re looking for a well fleshed-out story because that’s not what it is, it’s story could’ve used work and with a bit more effort put in it could have been something a lot better.

The series is for those who are fans of fan service, simple as that, it gives us characters and reasons for them to be together or even near each other and what that leads onto is exactly what you may be looking for, the fact is that the series doesn’t hide this, it knows what it is, it doesn’t come at you like a adventure/fantasy and then surprise you. It’s good for what it is but it is definitely for a suited audience so don’t just jump into it without a thought.