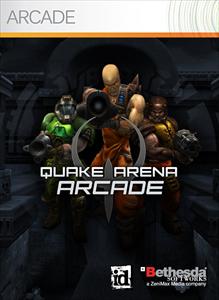 Although I was too young to ever play the original Quake series, it is hard to be a part of the video game industry without eventually hearing how it was a start in the right direction for the first person shooter genre.  And now, after much outcry from the fan base, Quake has been recreated on the Xbox Live Marketplace.  How does it fare in today’s market?  Does it live up to the  standards it set back in the day?

Evil overlords like to watch fighting matches.  And you just happen to be a gladiator.  And what is this?  Those terrible rulers also have resurrection powers so that I can die as much as I want? Sweet! Sign me up!

Yup, that is about it.  Go in an arena and fight different characters. Repeat.  As far as story goes, this is not an emotional, character driven story.  The back stories of each character are interesting, but not very deep.  Even the motivations of the overlords could be greatly expanded.  Really, though, all I am saying is that it might have been nice to learn more about the people I was playing with, but hey, this is a shooter.  What is more, this is Quake.  Do I really need a gripping reason to shoot exotic gladiators with a variety of powerful weapons? No. 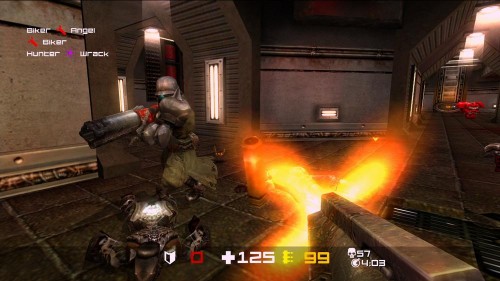 The biggest complaint to be had with the gameplay is the controls.  The analog sticks are simply not accurate enough to keep up.  Having never experienced this game, I was shocked at how fast everything moved.  I was able to get used to it, but wow was it mind blowing.  After doing some research, I found that a free, ad supported verison of Quake is available to play online, and I have a feeling that the more accurate mouse/keypad controls make the game much better.  But if you only have an Xbox or you enjoy your Xbox Live multiplayer experience more, then you will probably want to buy some Microsoft Points, as this game is very fun once you get over the controls.

If you are a history junkie, then you will love to see how much Quake inspired the shooters of today.  As soon as I started it up, I was reminded of Halo.  However, it is also very different.  Some people may get angry over the antiquated design.  For example, there is no regenerating health and and there is no kind of sticky reticule.  It all depends on luck and reflexes. And of course, many people will absolutely love that.  For old school activists and reflex purists, this game is pure heaven.  For newer players though, the constant deaths, super fast action and emphasis on luck of the draw will soon get frustrating and tedious.  Not to mention the fact that many of the arenas  start to look similar and boring.

For most, the multiplayer modes in the game will be their bread and butter.  Something about playing with actual people and predicting their random moves is just great.  The single player in the game is much more like a training game for the multiplayer part.  If you are looking for a first person multiplayer thrill on the cheap, then this is the way to go.  That is, if you can find any people playing online.  Other than finding it difficult to find players, the worst part of the online is that it got old for me really fast.  There is none of that super addictive feeling that I have with games such as Halo Reach.  It feels as though it was much more exciting 10 years ago, which it probably was.  But most people will probably really enjoy it and keep playing it anyway.  Just beware that you should not expect a game with all the bells and whistles of today’s FPS market. 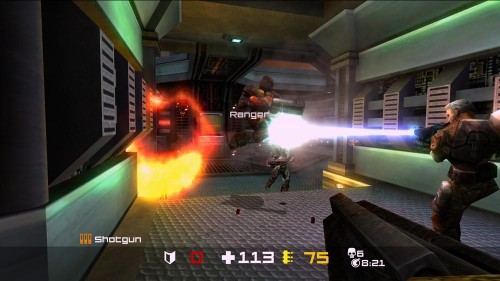 Graphics have been rendered in high definition and overall, this is a great looking game.  I was especially impressed by the texture work done in the game.  The bad part about the graphics is that explosions are a little boring and I hate having the view so close to the floor.  Those are pretty minor complaints though.

Audio, in a nutshell, is just there.  If you could create a  mixture of unoriginal sound effects and terrifically overused audio, then you would get the general idea. 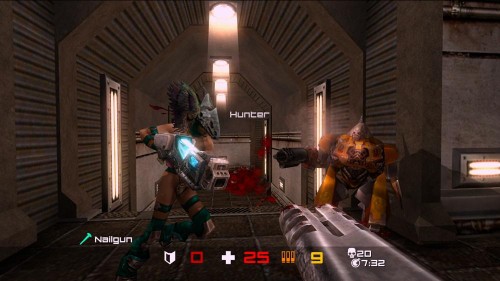 As I mentioned, a variation of this game is available online for free.  So, a fifteen dollar price tag is a little steep, especially considering that the multi-player is the main reason to get it.  However, considering that you are getting an arcade game with multi-player and single-player for a 1/4 of the price of most first person shooters, then this is a good game.  Just be sure you have people on your friend list that also have the game and that you don’t mind super twitchy gameplay.

I give Quake Arena Arcade: