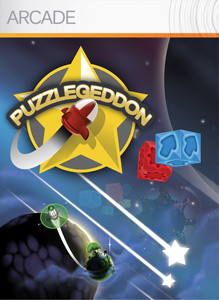 “Set in an array of galaxies, Puzzlegeddon™ features a clever mix of puzzle, action, and strategy in a fast-paced and exciting game! Compete for the top spot on the planet by creating multiple combos for the quickest way to gather enough resources to blast your enemies out of this world. Or, if you find yourself on the perilous poisonous planet, solve brainteasers to survive for as long as possible and rack up a high score. Battle up to five players on Xbox LIVE® in a variety of galaxies in this stylish and quirky puzzle brawler.” [Via Xbox.com]

You are on a planet, trying to collect resources to destroy the other people that are also on the planet. That is pretty much the entire story. Like all puzzle games, there isn’t much need for a story. 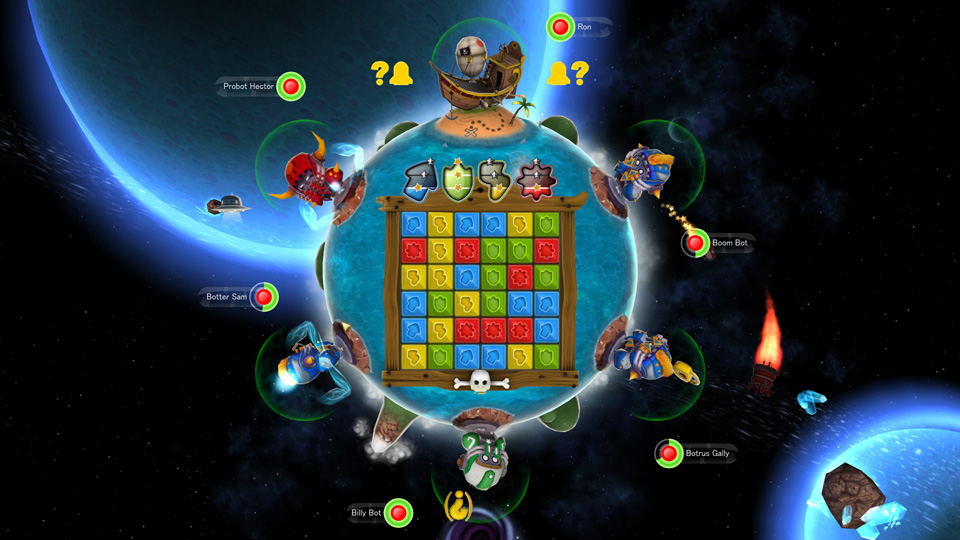 Gameplay
Puzzle games must use unique gameplay to stand out, because what is fun about buying a game that you could already have played?

Puzzlegeddon almost succeeds in being unique. It feels more like a weird combination of resource collecting, block elimination, and strategy. The gameplay mechanics have been around forever, but Puzzlegeddon succeeds in combining the three for a fun experience.

You must combine 5 or more of the same colored blocks in order to gain some resources for a certain ability. Although there are symbols on the blocks to tell them apart as well, these symbols are very hard to see on smaller TVs. Because of this, this game isn’t very good for colorblind people.

You can move blocks vertically or horizontally to match them up. You can then make those blocks into resources. The beauty of this game is that it doesn’t make the resources until you want it to. You could make huge combo set up and then take the resources whenever you are ready, for a massive resource boost.

Each color resource represents 1 of 4 different abilities to unlock. As you collect resources, the resource gauge will fill up and when you get enough of a specific resource you will be able to use a defensive or offensive attack depending on the type of resource you have collected. Each gauge also has three levels, the higher in the gauge the stronger the ability is. The goal is to kill everyone else and to stay alive at the same time.

Dying isn’t entirely bad though. If you die, you can play a minigame while waiting for the other players to die. This minigame can improve your chances in the next game, or even repsawn you back into the current game. 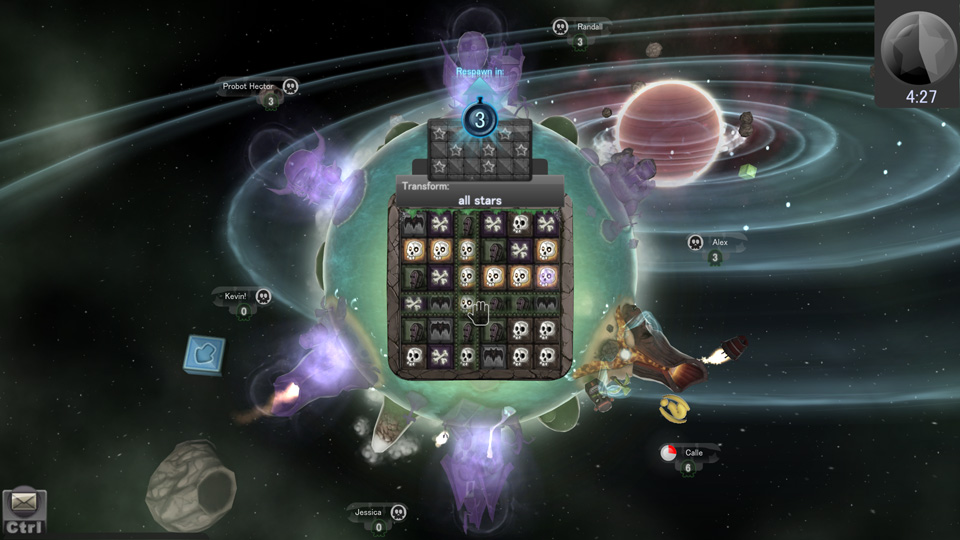 The audio in the game is valued the exact same amount as audio in Tetris. It is there just so it isn’t quiet while you are playing. There are a few sound cues to listen out for though. A sound effect will go off when an enemy is using an ability, this is the time to stop and check who is attacking who and take the necessary precautions against the attack if it is coming for you.

The achievement list is extremely difficult; also “Duelist” and “Brawny” are impossible since the online community is dead. Luckily the game is addicting enough to let you want to play enough that the other achievements should unlock by just playing a lot. The only one that is based on luck is “Geddowned!” since in order to do it, you have to use it right when the enemy uses an attack, and you don’t have enough time to see which attack he is using first. You just have to hope that he is using the monster attack.

Overview
Although the online community is already dead, you can still play against bots and have fun by yourself. Puzzlegeddon combines two pretty simple gameplay mechanics and combines them into a flurry of fun. I give Puzzlegeddon 7 capsules out of 10.