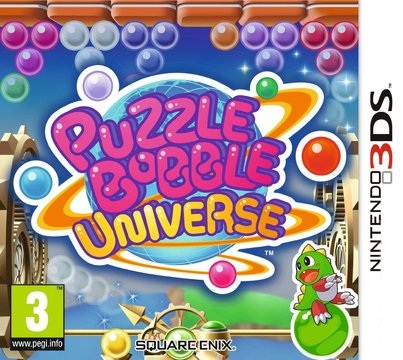 Puzzle Bobble (Or Bust-a-Move in some regions) is a ball-popping puzzle adventure that has been around since the early-mid 90s. The game features cute dinosaur creatures that take control of a kind of ball-launcher used in an effort to rescue their friends and defeat boss monsters. The game features a whole lot of challenging single player levels as well as even extra fun challenges. 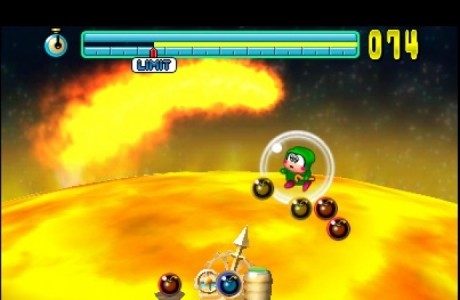 Bosses, when will they learn?

The gameplay of Puzzle Bobble Universe is quite simple; players control a cannon-like device that allows them to fire a coloured ball towards other coloured balls in an attempt to shatter them all and claim points. The main priority in the game is to match these coloured balls 3 or more times so that you score points and advance in the game. Points are primarily used for gaining high-scores to try and defeat as a personal challenge to constantly get better. 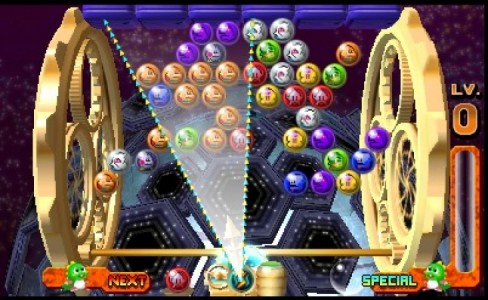 And the Lasers were fired that day.

The main puzzle mode takes you on a set path of levels set on various worlds. Each level is known by a certain name, such as “Moonbase”, and each level has a set number of 10 rounds for players to complete, including one extra boss level where they must defeat a boss monster by shooting it with these bubbles. Each level also has an additional challenge of recuing your dinosaur friend via collapsing a key bubble by matching a set of bubbles surrounding the key bubble. The challenge in this is that if you collapse the bubbles a stack behind it and cause the next few rows to collapse, you’ll lose the key because you haven’t popped that bubble.

The way the game works is that you match coloured bubbles to each other to make them pop/shatter. Any bubbles that are connected but are not of the same colour and are not connected by bubbles of another colour will fall under the gravity (I guess?). So say I have a row of green bubbles and just under them are a purple and red bubble, if I pop the green bubbles, I will lose the red and purple bubbles, but not get points for them. Though, utilising this feature in a strategy you could possibly beat a level a lot quicker by sacrificing your score. 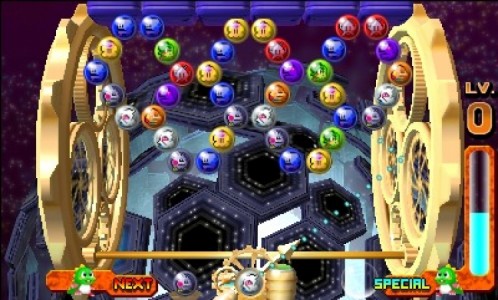 Connect the colours to make them burst!

And in a game like this, speed is also a key element in beating a level. As time progresses, the level begins to collapse, possibly because the bubbles aren’t there to hold it up anymore. If any bubbles touch the bottom of the playing field it is game over and you must start the entire puzzle again from the beginning. So players are constantly weighing up their options, whether they should take the extra points; or whether they should sacrifice some in order to not lost the entire level. But a smart player will utilise all of their options in a level if they need to.

For a puzzle game, there are a fair few power-ups and abilities that players can utilise. The first is a kind of bullet-time like thing, where the game world slows to a halt and you can fire an assortment of bubbles onto the field to try and make some combos. The more combos you make, the more points you get. If you fail and just spam balls over the place though, don’t fret, as the balls fired in this mode pop instantly; as soon as the event finishes. Players can also use a wide range of abilities, which build as you fill a combo-meter on the side. One such ability changes all bubbles to a specific colour in a given radius, another is a laser that clears the field of all bubbles in a radius.

In some challenges players can utilise special bubbles that are on the field to do some pretty amazing stuff in their assistance. These are known as gimmick bubbles and have some pretty serious effects. These bubbles only appear in the challenge mode though. 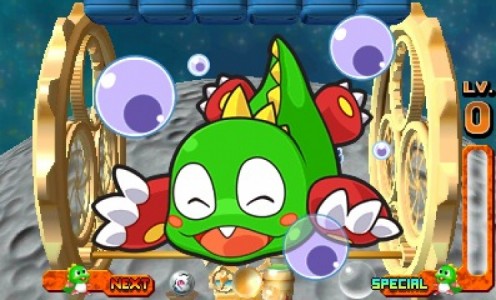 Puzzle Bobble Universe has an inherent strategy and puzzle element, which depending on the user, may make the game incredibly challenging or just simply challenging. This is not for gamers that lack problem solving skills.

Puzzle Bobble Universe has a very basic design, but is also graphically quite pretty. Each of the dinosaur characters are beautifully drawn and coloured, the cogs to the side of the cannon device rotate in and out of the screen when the 3D is turned on and each bubble has its own colour and symbol. In fact, this game probably has the 3D since launch. 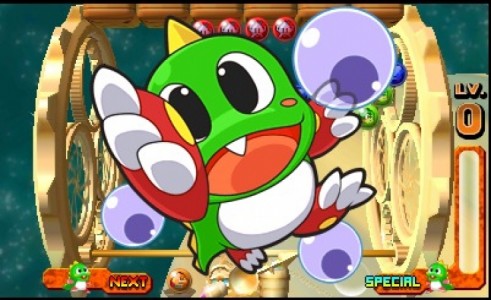 This looks amazing when it’s popping out at you!

The 3D in this game is incredibly well done, with the 3D not appearing just in the screen, but also outside it. It’s amazing seeing one of the cute dinosaur creatures floating a few centimeters above the screen when you complete a combo or when you get a score screen after a round and it just hovers above the action. It’s so great.

Puzzle Bobble Universe features a really simple soundtrack, but this does not mean that is ugly or of low quality. It just means that the tunes themselves are slow and simple.

The simplistic nature of the background tunes creates a peaceful kind of feel to the game, despite it being based around destruction. Popping bubbles is destroying them, no? Anyways, the music seems to act in a way to calm your mind in order to have players to be bale to think out the problem and work on a solution without too many distractions. The music does not become insanity-inducing, but I dopn’t think every kind of gamer is going to enjoy the same tune being repeated ad nauseam throughout a level either. 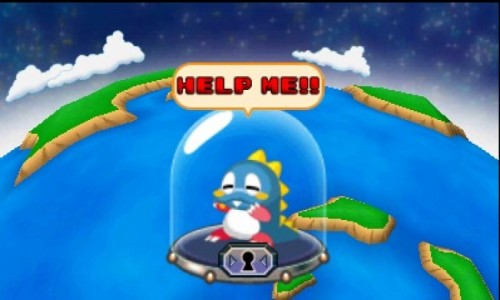 Saving these guys is a challenge on each level.

Every time a player pops a bubble it plays a simple, yet, rewarding effect that keeps them going even more. While a game of this type has a high potential to become boring and repetitive quickly, these sound effects help to keep an addictive element within the game.

Ultimately, Puzzle Bobble features simple audio that is also elegant, but also has the potential to annoy some users, especially if they suck at some levels.

Puzzle Bobble Universe is a puzzle game that involves players popping bubbles to save their fellow dinosaur friends and defeat boss monsters. It has possibly the best 3D on the 3DS device so far, as well as some really puzzling level design as well as excellent audio. While I feel that asking full-price for this game might be stretching it a little, anybody who does buy this game will find that it is both entertaining and difficult. It also provides great amounts of nostalgia to anyone who grew up gaming in the 90s.