Puzzle Bobble, or as many other people may know it as, Bust-a-Move! makes a come back with that memorable little dinosaur. Puzzle Bobble Live is a unique puzzle game with not only local competitive play but online play as well.

There isn’t anything advanced about these graphics, because its Puzzle Bobble! There doesn’t need to be anything fancy when it comes to this game. There are plenty of various background images that cycle through as you advance through arcade mode, or when going against another player.

The background images are extremely great at what they do. They are there for a nice backdrop, but they don’t take away from the gameplay. If anything they accentuate the play because it gives you a calming feeling when your staring into the stars or into atlantis.

Each of the bubbles is uniquely colored and quite distinguishable, and nearly every bubble also has a small moving creature inside of it. And your method of firing these bubbles is the diminutive green dinosaur Bub. 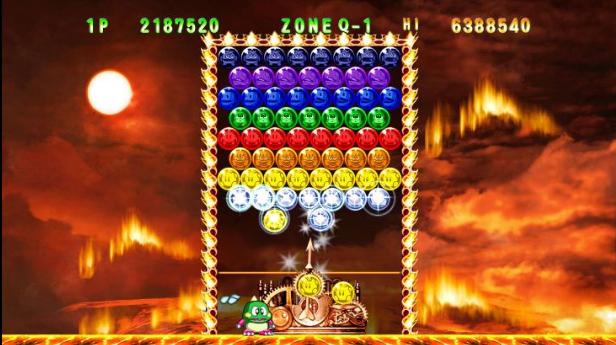 Don’t let his size fool you, he is colorfully designed with many various emotions that are animated when certain things happen during gameplay. This also goes for the CPU battles when you face other creatures from Bust-a-Move! past in a head to head bubble popping bonanza.

The game supports Avatars from Xbox Live accounts, and your avatar is the exact same in appearance as supplied by Microsoft, with additional character animations to react to what is going on during the game.

Gameplay is simple enough, though you will be hard pressed to stop and put this game down. You will want to keep playing for a few hours at a time. Or simply play through once, and put it down for a day or two, then come back again. One thing I can guarantee is that you will come back to play this game.

The mechanics of the game are simple to understand. There are colored bubbles that are being suspended from the top of the area, and you must use your cannon wheel to launch your bubbles into them, matching 3 or more of the same color together to cause them to fall and disappear. If the bubbles reach below the breaking line, the game is over.

The bubbles are always launched in a straight line, though they can be rebounded off of walls to make troubling shots. Plus the game provides a guiding line for your first area, to help acquaint the game controls and aiming to the player. This however disappears after the first area.

Though these mechanics are simple, they do throw a few curve balls your way. There are 3 special obstacles that can get in your way, a rainbow bubble that will turn whatever color the bubbles nearest are popped. A block that is impassable nor un-reboundable. And finally a dropping ceiling that will cause every bubble touching to stick to it regardless of where it touches the wall.

Not only are there obstacle bubbles, but there are also two special bubbles that will assist you greatly. A fire bubble will destroy any bubbles that it touches, while a sparkling bubble will pop any bubbles of the same color it hits. This leads to some interesting finishes where it may be possible to finish an area with only one shot. 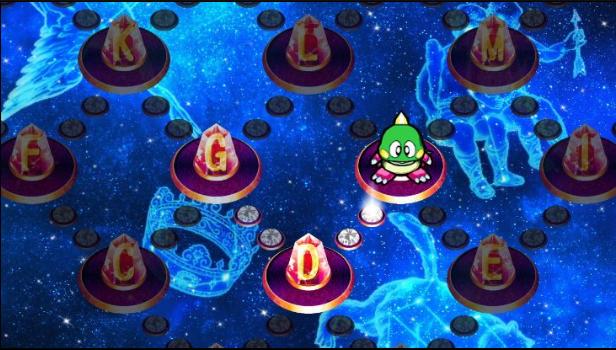 Gameplay is broken down into four different modes; 1P puzzle, Infinite Mode, CPU battle, and Multiplayer. The 1P puzzle is basically the story mode, though there is no story for this game. You will move Bub through space to crystals with various alphabetical letters, and playing five rounds in each area until the end. It is possible to continue if you fail, however your score will be reset to 0 if this is the case.

Infinite mode is much like it sounds, you will be consistently bombarded with new levels of bubbles, leading to what can be played for hours on end. There is even an achievement for playing a straight Infinite game for an hour. Methods are the same as 1P puzzle, but the game continues until the bubbles reach the breaking line, finishing the game.

CPU battle will have you facing enemies from Bubble Bobble, in an infinite mode style game. The first one two have their breaking line reached twice, loses. Though there is a curve ball here, as getting big combinations of bubbles popped, will result in more bubbles being added to their side. Though this is also the same for you. 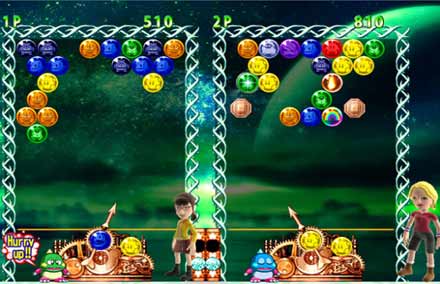 Multiplayer is the exact same as CPU battle, except against your friends or opponents from around the world. Both Avatars will be displayed on screen, and you may talk to your opponent if both of you have microphones. Multiplayer is broken down into Ranked and Player matches which is the standard.

This game may seem like it would only be something to be played for a small moment. But this is a perfect game to pick up and play any time you want to. It’s simplicity is it’s beauty. For only 800 MS points this game is extremely enjoyable and hard to pass up for anyone who enjoys puzzle games, and especially those who love Bust-a-Move!!

I give Puzzle Bobble Live! a bubble popping

Let us know what you think of Puzzle Bobble Live !! Comment here