If there’s one thing that iOS games do well, it’s puzzles. They were the first big genre for apps, and for good reason. They’re portable, quick, and give you a great sense of accomplishment every two to ten minutes, which suits the short attention span of some iOS players (I’m looking at you, 7 year olds whose parents have bought them iTouches). I appreciate a good puzzle game, it’s a great way to get the brain juices flowing and feel like you’re doing something semi-intellectual while still having fun. Puzzle 26 gives you that, the game is all about the puzzles and it delivers some doozies.

Its described as Minesweeper with a twist and that is pretty much the best description for it. There are four differently coloured puzzle pieces and you have to place them on the board in the correct blank tiles. These are found according to a few numbered tiles on the board that tell you how many of those coloured tiles the numbered tile is touching, so using this you can figure out what goes where. 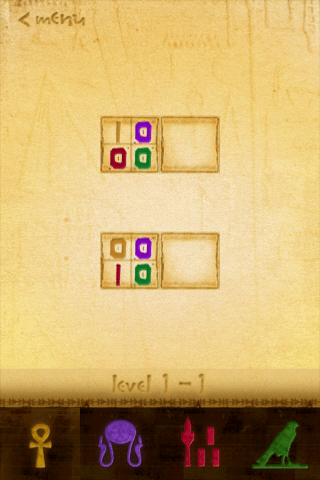 The puzzles start off fairly easy and get harder as you go on. There are 50 levels in each ‘day’, and four days in total so the learning curve is fairly evenly graded as it goes on. The first day is pretty easy to breeze through, but once you start nearing the end of the days it becomes a big headache. At first you can depend on the answers coming easily, but it starts to be more based on guessing and a frustrating trial and error which means clearing the board a few times and trying not to hit the same puzzle roadblock again and again. It takes patience and a good memory to come up with different solutions or see a solution that might be sitting right in front of you.

The controls are easy to grasp, although there is a tutorial that you have to go through before playing the game to make sure you understand what’s going on. While the controls may have been able to be picked up quite easily, the rules are somewhat more difficult (particularly if the person playing hasn’t spent as much time on MSN Minesweeper as I did in high school), so it was a good idea to put that in an easy to find place. In terms of controls it’s a simple select colour, click blank spot, have the game flash at you warningly and make a bad noise if that tile can’t go there. 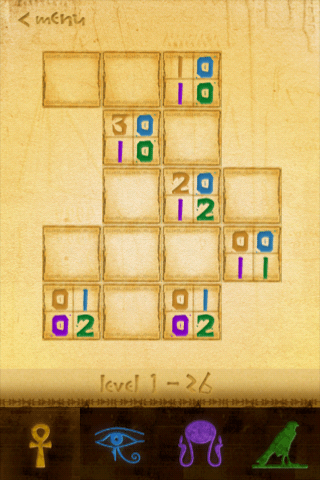 One issue of the game, which a lot of puzzle games have, is that if you get stuck on one level you’re screwed in terms of progressing. This is unbelievably annoying, given that as you get to the later stages some of these puzzles get ridiculous. There is a ‘unblock all levels’ button but it doesn’t really seem to do anything. 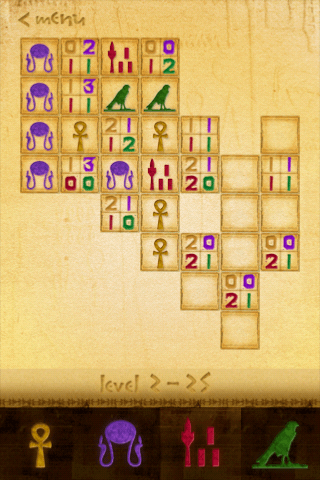 Every level you finish gives you a piece of a missing tile slide puzzle, which you can have a go at completing when you finish the day. I’m not a huge fan of the slide puzzle, but it was cool that there was an added feature to the game. Plus, it was cool to have something other than the congratulations to show for finishing a day. 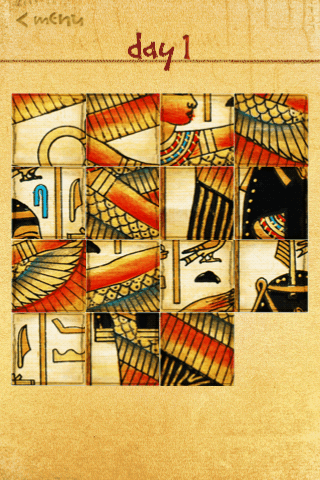 Apart from that there really isn’t anything else to the game. Don’t get me wrong, I don’t think that’s a negative. I prefer a game with a simple concept that they’ve done well over one with a completely crazy concept that they haven’t managed to pull off. And the developer has certainly delivered his concept well.

The soundtrack is the sort of music you’d expect to find blaring in a stereotypical Arabian bazaar. The in-game music is a bit more chilled, twanging guitars and percussion instruments. Its kind of funky but you’ll probably go a bit crazy if you listen to it for too long. The sound effects are crashing cymbals and maybe not the best to have on if you’re planning on playing it for an extended period of time. In terms of graphics, they’re pretty simple and standard. The graphics are simple and pretty standard. They insert a few Egyptian symbols here and there to make it feel all authentic.

Overall, it’s a good puzzle game with a fair learning curve – the developer had his fingers on the pulse in making it accessible and easy for people to adjust to. There are aspects that could be improved in terms of gameplay but for an indie game it’s a good creation. With 200 puzzles plus the awards, it’s sure to keep you entertained for a while.