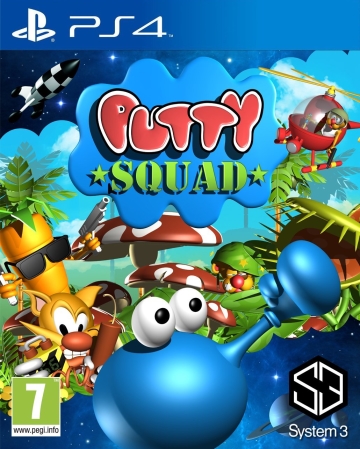 Overview
It’s been widely touted that both the PlayStation 4 and Xbox One would be working to bring indie game developers into the fold, with Sony showing a bit more drive to treat with small studios. System 3 Software, a UK-based indie game developer and publisher, were quick to take Sony up on the opportunity with the release of action-platformer Putty Squad (not to be confused with the Power Rangers’ Putty Patrol). How does it hold up, though? Will its nostalgic whims make you putty in its hands or is this old goo best flushed out to sea? 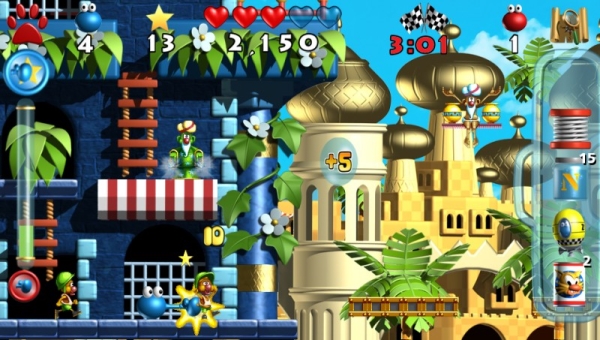 Story
Something has (apparently) gone horribly wrong! All of your red putty friends have been kidnapped by an evil army of domesticated wildlife! You’ll have to fight with cats, dogs, birds, bees, and more to absorb all of your putty buddies and get them to safety!

In truth, it’s all a farce. There’s no sensical story. You’re simply traveling from one world to another absorbing red putties and dashing for the exit. 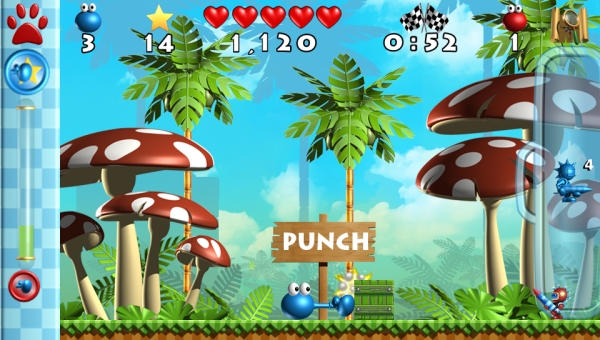 Gameplay
Originally released in the early 90s for SNES, Putty Squad is a fairly straightforward smash-and-grab platformer. The game also got demos on PC and Amiga, but was never released in its entirety for either.

You control the world’s only blue putty. Red putties have been placed across several levels in nine worlds, and you’ll have to rescue all of them. As an amorphous blob, you have a few tricks up your sleeves to help out. You can walk and jump, of course, but you also have the ability to form a fist and punch enemies, blow yourself up like a balloon to hover around, morph to travel faster, and absorb abilities to use as well. The variety of abilities you can pick up and use it interesting, but at the end of the day very little of it feels like it makes a difference. 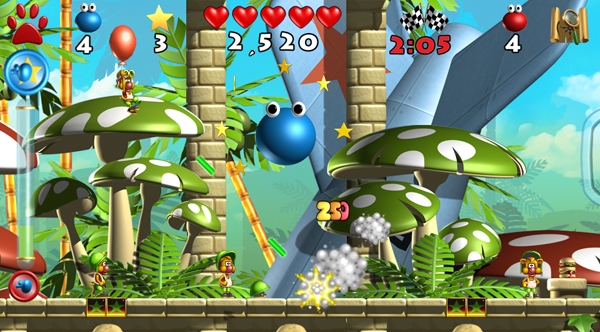 As you travel through each stage, there are a small variety of tasks to complete, depending on the mode you’re playing. Whether Marathon or Challenge  modes, you’ll want to take out every pup (dog wearing a helmet), collect every star, and try to beat a score while you rescue every putty. That’s really all you’ll be trying to do in Marathon mode, but Challenge mode also tasks you with beating the level in a certain time, not eating any food throughout the level, and never dying. It’s enough to keep you at each stage for 5-10 minutes, making sure you’ve completed every task possible. Once you’ve finished them out, though, you’ll never care to go back and play them again.

Putty Squad feels like a platformer full of distractions instead of something meaty to bite into. The game hasn’t made any significant strides since its original release two decades ago. It’s functional, but there’s nothing exciting or hooking about the game in any sense. It’s just a mad scramble left for you to decipher. 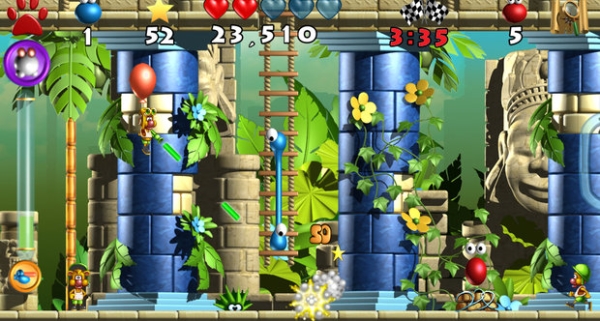 Visuals & Audio
Putty Squad is being touted for its port on the PlayStation 4. That said, everything that’s going on with this game in terms of graphical prowess could be handled by your smart phone. The character models look like they were put together by a team of sophomore graphic design students, given that they’re plain and stiffly animated. The game world is also far too busy, making it easy to lose your character amidst the chaos. It’s also difficult at times to tell if something is a platform or part of the background. It’s bright and vibrant, but it’s too much sensory overload. 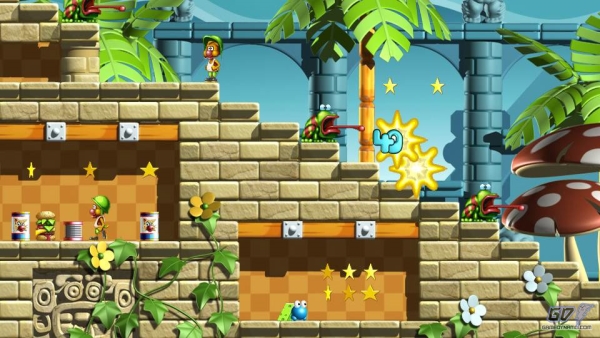 The audio design for Putty Squad feels serviceable. Each of the themed worlds has music that efforts to match its aesthetics and have you tapping your foot. Many of the sound effects feel as though they carry no weight or were ill-utilized, however. In sticking with its retro theme, it feels as though it’s done nothing to keep itself relevant.

Overall
Overall, Putty Squad is a lackluster remake of a game that never grabbed any staying power. To think it came out 3 years after the original Sonic the Hedgehog and was only recently heard from again should be telling. The sound design is passable, and the visuals are vibrant but cluttered and confusing. The game may be able to keep you entertained for a short period, but it has no staying power or replayability. Only the hardcore nostalgic fans should consider this game, and even then, it may not be worth the price of admission.