Puffle Launch is a game spawned from the ever-popular Club Penguin. As a Club Penguin virgin, I don’t really get why this little puffle guy has anything to do with Club Penguin other than being drawn in the same style, or why he wants to launch himself around the sky to get rings but hey, not here to judge.

So the point of Puffle Launch is to launch the Puffle into the sky and gather as many rings as possible. He moves around the sky by being launched through cannons while wearing a cute helmet. There are a variety of cannons that have different features. The most common ones are the fixed ones, which are usually in an insane set of a run that makes the Puffle move too fast for your eyes to follow properly. 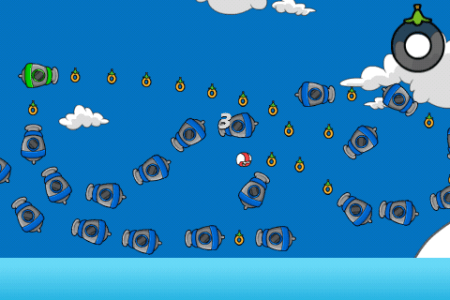 Other than that cannon there are many others which include cannons which aim in different directions, changing direction every few seconds, those which continuously move in a 360 spin, the ones which move horizontally or vertically and the ones you can control with your finger. In the twenty-four levels of Puffle Launch there are a surprising amount of introductions of these features. It seems that every few levels a new thing is introduced, it’s basically a constant learning curve. Three levels in any pretence of easiness and beginner stages was dropped and the game got – forgive the pun – shooting forward. 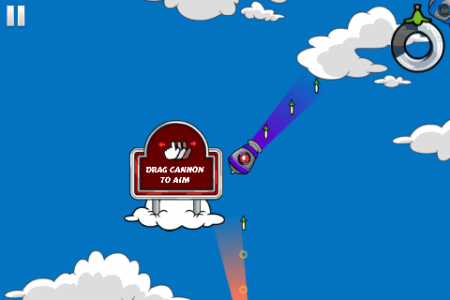 Given the fact that it was developed by Disney and originates from a cartoon penguin, I figured the game would be fairly simple or at least have a whole bunch of fluff levels before getting to the meat of it. Instead, I discovered a compact game that had no problem with making me feel like I was inadequate as quickly as possible.

There are two stages with twelve levels to each stage. The first stage – Blue Sky – is set above the ocean so when you plummet to your death you actually just fall into the ocean with a smile on your Puffle’s face. The second is above the clouds, so your Puffle just smiles as he falls through the bottom cloud layer. I guess that is the strongest sign that this is a Disney game. 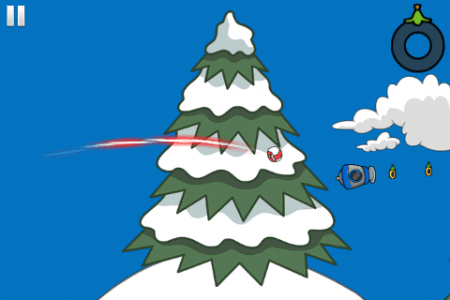 The controls are very simple, you tap the screen to shoot the cannon, touch the left to make him swerve to the left while in the air and vice versa. The purpose of this is to follow the trail of rings in the sky or reach the next cannon, but you can also use it to recover if you’ve missed a cannon. You don’t need to follow the path set out by the rings, your goal is to get as many rings as possible, however the only thing you need to achieve to finish the level and unlock the next one is scoring the big, finishing ring. Its easy to miss an entire section of the rings, so much so that if you get a whole bunch in a row the game congratulates you saying you’ve done ‘great’. 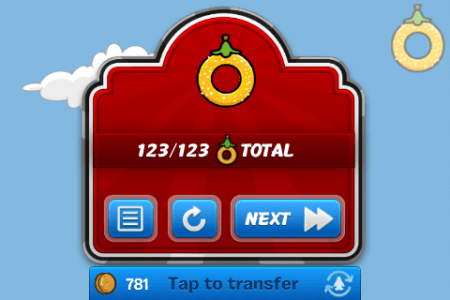 This is one of those games where if you fall down you start at the beginning, which usually frustrates me to no end. However, there is a checkpoint cannon that you can get where you will restart the level at that point. Getting to the checkpoint cannon is another matter entirely. Falling near the end of a stage where you’ve accidentally bypassed the checkpoint cannon is an absolute pain, but that’s the price you pay for playing a game like this. The good thing is that it doesn’t matter how many times you’ve retried a level, it will retain the rings you’ve already captured. That’s probably their version of dumbing it down. There are no lives, you get as many shots as you like, which means that you’ll finish the game even quicker given the small amount of levels. 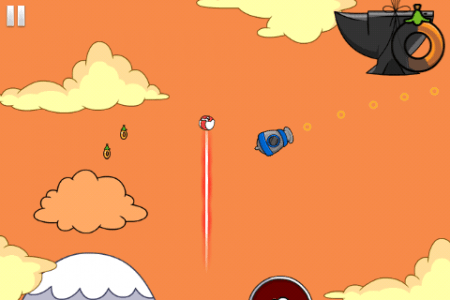 As can be expected from a Club Penguin spin-off, Puffle is cute and cartoony. The clouds are puffy, the balloons are shiny, and everything is dandy.

The soundtrack is like the missing track from Top Gun. There’s some hectic guitar, mission impossible-like melody progressions, and it feels like your Puffle’s mission to collect all the rings will result in saving the world from some guy with a curly mustache. It does get repetitive after a while, but for that first few minutes it’s fun.

Puffle is a funny little game, it certainly gets you involved and the learning curve keeps you interested. It’s pretty much bite-sized and can be finished quite quickly, but there will be a sense of achievement at the end of it (even if it is bite-sized achievement). Perhaps not suitable for what you’d think its intended audience would be, it is a great little app, good for some family-friendly fun.

I give Puffle Launch