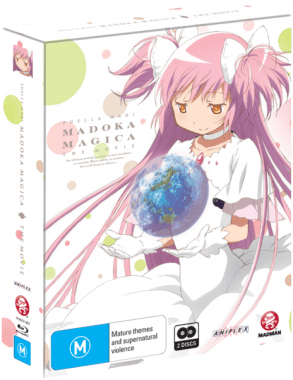 Overview
Anime movies that summarise an entire show’s worth of content into two hours are a fickle thing. To put it bluntly, I’m hardly a fan. History shows us that they straddle a very fine line between offering newcomers an everything-you-need-to-know yet still coherent story and collapsing in a jumbled, poorly-paced heap.

Despite being a 12 episode TV series, hit magical girl anime Puella Magi Madoka Magica, known as “Mahou Shoujo Madoka Magica” in Japan, still received the movie summary treatment in the form of two films. It was almost inevitable. The show has garnered so much fandom in recent years that to suggest it’s the new-age Evangelion wouldn’t be so far-fetched. Whether it deserves that status is debatable yet here we are. Does this collection of two films serve as a worthy supplement or should newcomers and fans alike just stick to the TV episodes? 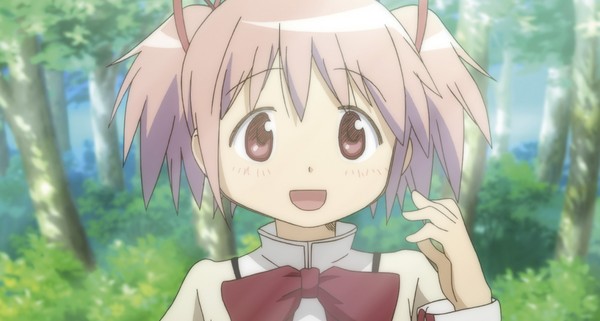 Story
If you aren’t familiar with the Madoka Magica story, it’s not your typical magical girl anime. If you’re coming into this show expecting a new age Sailor Moon I suggest you stop and take a deep breath before proceeding. At this point it’s hardly a spoiler discussing the nature of this beast when the blurb itself mentions something along the lines of “strange warning”, “impending loss” and “drastic change”. Not too subtle, is it! Especially when this is the work of Gen Urobuchi, the writer behind Fate/Zero which funnily enough also has an ill-fated, wish-granting plot line.

Madoka Kaname is a typical, kindhearted 14 year old girl with loving friends and family going to school like anyone else. It’s when transfer student Homura Akemi arrives when things start to get just a little strange. A person Madoka has never seen before seems to know her well, a fluffy white creature appears hated by some but loved by others and the existence of Magical Girls and their enemy, Witches, are revealed. 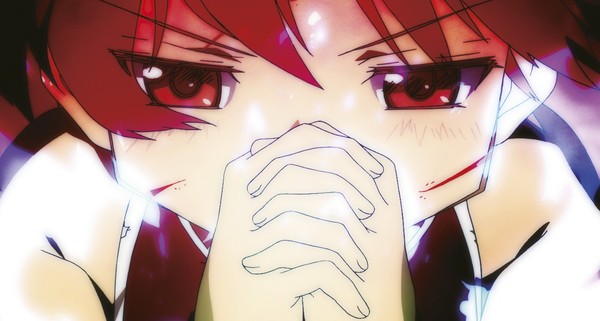 Known as Kyubey, the white animal has the power to turn any young girl into a magical one and grant them one wish they desire while they’re at it. Sounds like a Nigerian scam right? Well the forlorn atmosphere and dark undertones of the anime from the start has all signs pointing to “yes”.

The plot sucks you in right away as you’re left wondering where this train is going to go. Other than the pure Madoka, each character has some kind of flaw woven into their personality which they must overcome or risk falling into an abyss. The writing steadily becomes more and more sophisticated and by the second film you’re left with conversations of existentialism, the universe and what it means to be human. It is during the second film that the flaws of summarised anime films rears its ugly head. 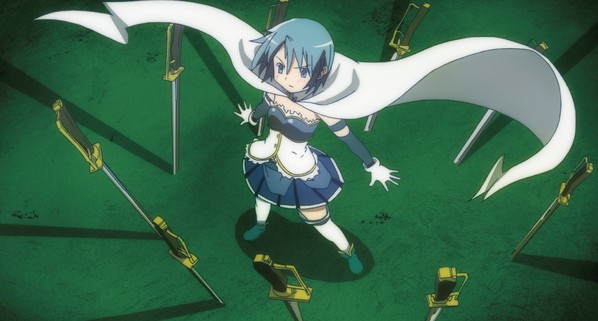 Plot points and explanations start moving faster than your ears (or eyes, if you’re reading subtitles) can keep up with. It’s still hauntingly dark and positively gripping at times, but this is information originally stretched across 12 episodes with slow build ups to shocking revelations. Here it’s just in your face leaving newcomers more than a little bewildered and scratching their heads wondering just what that ending was the heck about. Mind you even some of us who have seen the series like myself have no idea what’s going on with the ending, much like the notorious End of Evangelion film by Hideaki Anno which almost acts like a spiritual precursor if the writers of Madoka were to have their way.

It’s no doubt “cool”, in the epic, cosmic sense and you do come away from the experience shell-shocked and dribbling like a baby, but it feels like too much at once with too little progression. A subjective complaint, perhaps, but I do feel like the ending tried too hard to end, rather than let the pieces fall into place. Then again, this was probably the intention all along. Nevertheless, a continuation managed to spawn from the madness in the form of a third film which we reviewed HERE. 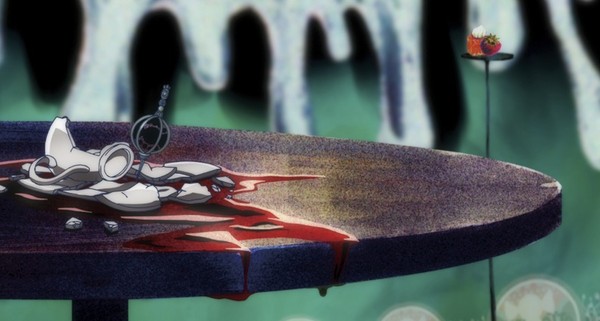 Visuals
Aside from an engrossing plot you also get some of the most unique visuals we’ve seen in anime currently on store shelves. The animators of SHAFT have done a great job in creating an unorthodox art style that makes every scene, and I mean every scene, have some kind of interesting feature or background you wouldn’t normally see. It’s a mad mixture of refined architecture, creative design and, at times, raw emotion.

The compilation movies could also be considered a remaster of the TV series. Many scenes have been retouched, altered or improved in some way compared to the original TV series. SHAFT has a history of having OCD tendencies, changing things around in their home video releases sometimes down to the smallest frame. 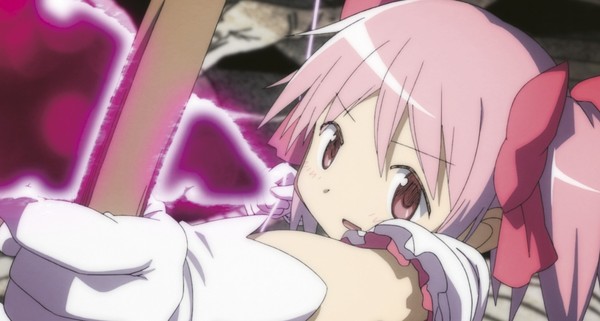 Audio
The audio that makes the experience in a show like this. The voice acting in Madoka is superb. Emotions constantly run high in this tragic, Shakespearean epic and the voice actors have gone above and beyond their job description. For me, Madoka’s highlight has always been the beautiful soundtrack by Yuki Kajiura known for her work in anime such as Tsubasa Chronicles, Fate/Zero and, more recently, Sword Art Online. The haunting melodies and violent orchestra grabs your attention from start to finish.

Extras
I almost forgot this was a limited edition release, and as such you get a very nice art box housing the two Blu-ray discs as well as a booklet containing art work from the series. If you managed to grab the box with the original Madoka Magica TV release, this suits it well. Unfortunately it’s nothing too sumptuous, being more for fans who like to have their anime organised in a box rather than play around with loads of goodies. 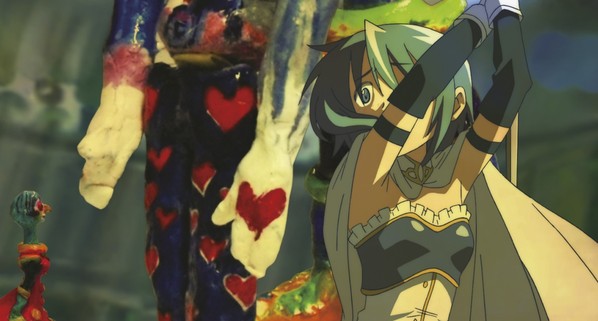 Overall
Madoka Magica is definitely an experience, one that explores the classic tragedy theme all too well, if a little by-the-book. If you always dismissed magical girl anime as being too “girly” then this is the one to watch. It’ll turn your world upside down. For newcomers these two films are a great and powerful digest of the series, if only a little rushed towards the end. This collection is probably the most well done summary I’ve seen of a TV anime.

However, I’ve always preferred to just watch the series instead for more depth and character development. It is after all only 12 episodes. For existing fans there’s very little new content in this recap collection and all but the most ardent fans would drop the extra cash for another viewing. Ultimately though, this fact does little to detract from the quality of the release on offer.