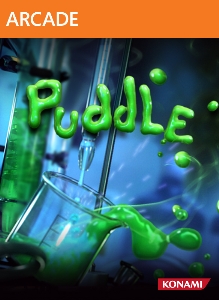 Puddle was originally a school project developed by six students studying at EMJIN, a video game development school in France. The project would go on to win the ‘Student Showcase’ prize at the Independent Gaming Festival which took place at the Game Developer’s Conference in 2011. Neko Entertainment took up the task to commercially develop the title and release it for digital platforms.

It’s nice to see a game with such humble beginnings making it to the mainstream, and deservingly so, considering the unique concept of the game. Puddle is billed as physics based puzzle game, and while similar ideas have surfaced in gaming over the years, Puddle executes its concept in a rather unique and impressive manner, although as a game experience, it somewhat does not deliver as well as you would expect. 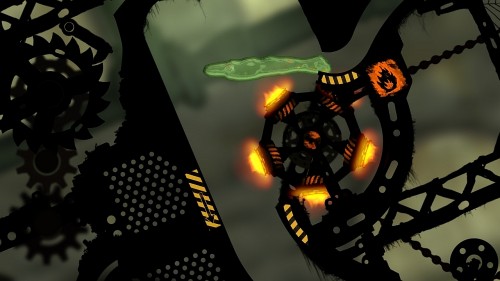 Like most indie video game releases with modest budgets, Puddle is a very simplistic looking game but the graphics are clean and crisp, and the visual design does the job well enough. It won’t impress you with its graphical effects and such, but there is some artistic flair that’s a bit surreal.

Musically, Puddle is a rather gloomy game, and combined with the sound effects, it’s a bit eerie and creepy at times. The music in the game is soft and trance like, but it does have some harder techno moments and different styles depending on the theme of the level.

Speaking of levels, Puddle has a whole set of thematic worlds and each has their own unique style, as you will furnaces, office space, labs, and even the human body. Each stage has a cool design and an interesting shadow puppet like effect for the most part. 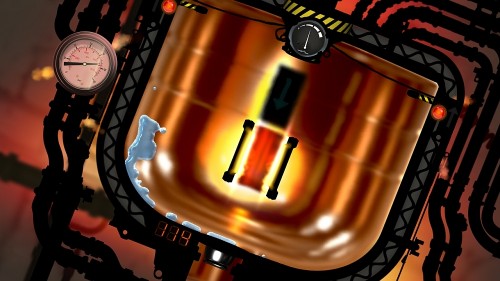 In Puddle, you essentially take control of the environment by tilting it with the triggers, and that’s there is to the controls really, one trigger to tilt to the left and the other to the right. Tilting the environments manipulates objects within it, but what you’re primarily manipulating is fluid. As the name of the game suggests, you manipulate puddles of various kinds of liquid, and the idea is to guide the liquid through various environments with the goal of reaching an exit. Some levels require you to do so within a certain time limit, but in most levels you need to successfully preserve a certain volume of liquid till you reach the exit. The quicker you are and the more liquid you preserve, the better your score. There are also plenty of obstacles to add to the challenge, such as fire and plants. Occasionally things shake up a bit and you do something other than playing around with liquid.

The concept sounds simple enough, but the execution is rather deep. The entire game is governed by a close to life-like physics engine, and as you’re tilting the environment all the objects behave and react in a fairly realistic manner, and influenced by gravity, momentum, friction and the laws of nature and physics. It is impressive how they pulled it off, the liquid physics take centre stage in this game, and what’s interesting is that each type of liquid has unique properties, causing them to behave differently.

They’ve done a really nice job with the physics engine, also with the way each type of liquid behaves. On that note, it would be worthwhile to refresh your high school of physics and chemistry, because the puzzles in the game tend to assume that you, for example, know how liquid chloride reacts to heat. 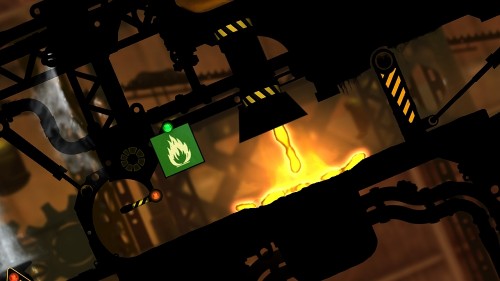 Which brings me to the main problem with Puddle, it isn’t the casual and relaxing puzzle game that it appears to be, as instead it is actually a fairly difficult game where the challenge picks up early on. It can be very difficult to get used to the physics of each type of liquid and it’s very easy to lose control of it. In your first session, you’re most likely going to be just scraping by as it will require a lot of replays to really figure out the intricate physics. Also, the level design is a bit tricky as it can be difficult to figure out what’s coming ahead, and the problem with that is that Puddle isn’t supposed to be a twitch heavy kind of game, as knowledge of the path ahead would be necessary to plan the flow of the liquid.

That’s how it is with Puddle; the game is not an intoxicating puzzle game where skill comes into play, as instead it requires repeated plays and a ton of memorisation. The liquid behaves in a very unpredictable manner, and in a matter of moments you lose all of it. The game can feel a bit stiff at times, but is perhaps the consequence of having realistic physics, as impressive as they are they still sometimes take away from the enjoyment.

The developers aren’t exactly shy about the fact that the game is difficult, as you have ‘Whines’ that you can use to skip a level. You start off with two Whines, and to get more you need to go back and complete the levels you originally skipped over. 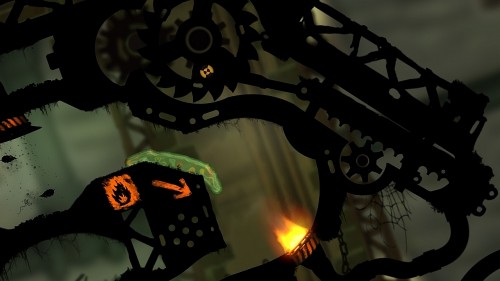 Puddle is a pretty cool concept for a puzzle game, and the physics engine is rather impressive and nicely executed. It’s a cool showcase of what you can do with technology, and even more interesting considering that it’s from an indie developer with a modest budget. However, as a video game, it isn’t exactly enjoyable or compelling. You will have fun seeing how all the various types of liquids and objects behave in each of the uniquely themed level, but the compelling draw and addictiveness that characterise puzzle games are sorely absent. It’s an interesting puzzle game, but too gimmicky for its own good, and not justified or fun enough for its price point. Also, I think this game may be more enjoyable on the Vita.