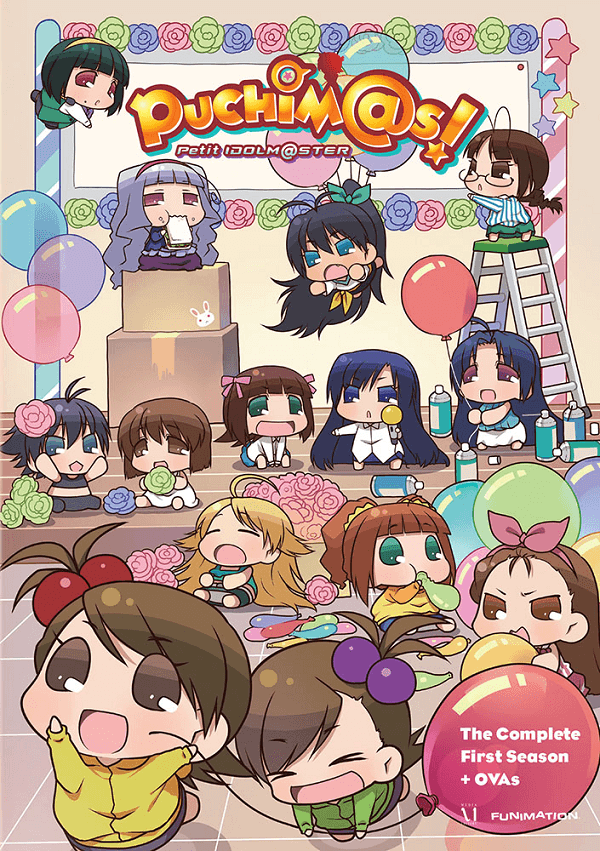 Overview
Back in 2013 FUNimation surprised quite a few anime fans when they announced that they would be streaming the Puchim@s! Petit Idolm@ster anime adaptation. Not only have none of the core Idolm@ster games ever been released in the West, the anime adaptation of the second game was never licensed for release in any form. Although this meant having a fairly high barrier of entry, the Idolm@ster fans have always thrived in the West. Still, the company surprised fans even further by actually releasing the series on DVD and now that Puchim@s Season 1 has been released, is it worth it?

Story
The daily lives of the idols from 765 Production have always been quite busy since they became popular as an idol agency. Many of them spend most of their time traveling to different nations, though the chances of someone finding a mini version of someone they know on even the strangest trip would be impossible. That is of course unless you have a series such as Puchim@s: Petit Idolm@ster where that is the entire aspect of the show. 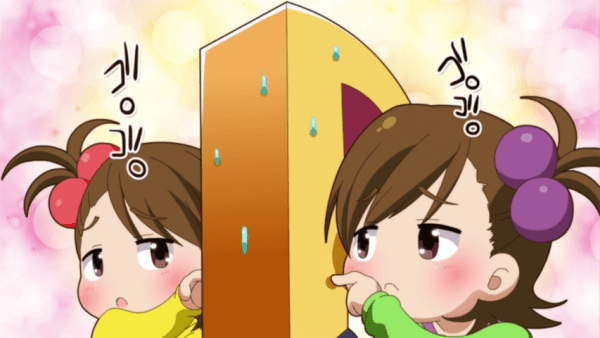 What starts as a simple appearance with Ami and Mami bringing home one Puchidol as they are called quickly begins to expand throughout the course of the first season as every idol and even Ritsuko and Kotori end up with miniature versions of themselves. This series focuses entirely on the lives of these idols and the Puchidol versions of themselves as they go from one hilarious event to another.

Most of the first season focuses on the idols encountering new Puchidols and bringing them back to the office where they join the group while also showing off most of their unique abilities, often ones that tend to match the girls they are based off of such as Yukipo’s fondness for digging holes matching Yukiho’s shyness or Chibiki’s ability to summon animals of legend when crying matching Hibiki’s affinity with animals. These are far from the strangest abilities as some of the Puchidols can fly, teleport, or even act like Gremlins by multiplying when touched by water. 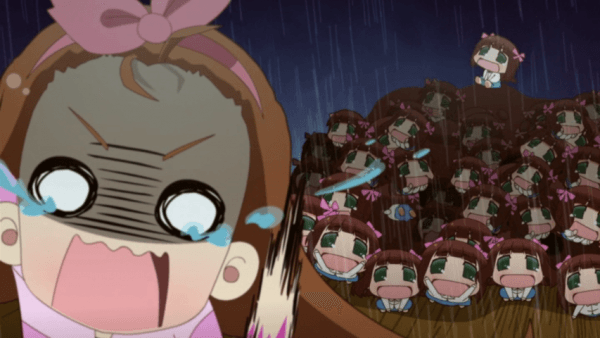 It is worth noting that Puchim@s: Petit Idolm@ster was originally created as a net animation series that aired every weekday over the course of three months in Japan, with each episode only lasting around a minute. Since that wouldn’t work quite as well outside of the net, these shorts have been combined into slightly longer “Director’s Cut” versions that generally combine an entire mini-skit into one five or six minute episode.

This is far better than the original alternative that saw events take place over six different episodes though it is odd to say that the opening theme that was present in the original animation has been removed entirely from the series, outside of snippets sung by the idols in passing, and is not included on this release. A couple of OVA episodes that follow the idols and Puchidols on a quest given to them by the Producer does add in some extra time to the end of the release, though oddly enough only half of that OVA is actually included in Season 1 as the rest is part of Season 2 release. 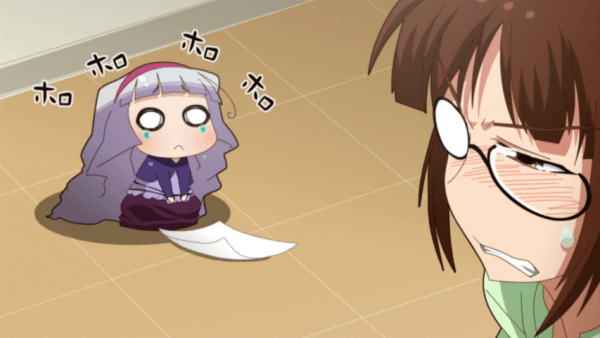 Now, I must say that those who aren’t fans of the Idolm@ster series or know very little about the characters, then this show is quite frankly not for you as it relies entirely on pre-existing knowledge about each girl’s personality and various traits for the vast majority of its humor. Every Puchidol is a chibi caricature of the girl they are based off of with and almost all of the comedy in the series revolves around these little creatures one way or another with plenty of hilarious antics that range from absolutely ridiculous situations, sight gags, the obsession some characters have with certain Puchidols, and much more.

As mentioned, the entire aspect of Puchim@s: Petit Idolm@ster leaves it as one that only fans would watch and that is likely for the best as this spin-off gives viewers plenty of time to enjoy an extremely cute and silly series that is about as light-hearted as they come while enjoying the humor that comes from the girls and Puchidols interacting with one another with no drama involved whatsoever unless it is also played for humor seconds later.

Visuals
As mentioned earlier, Puchim@s: Petit Idolm@ster is as light-hearted as they come and this is represented through the artwork as well. The series features plenty of bright colors and fairly simple representations of the core cast while the Puchidols remain cute chibis that have appearances that occasionally change depending on the season. 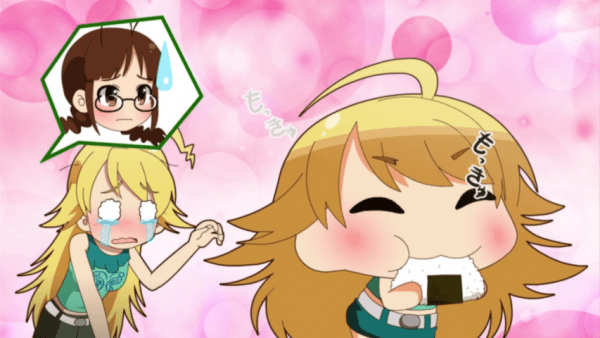 A lot of the humor relies on visual gags and thankfully those are well-represented through the cute artwork which occasionally changes to being slightly more detailed for emphasis on a character’s reaction. It is also worth noting that there are plenty of little sound effects and other pieces of text that float around the screen and these have been given insert text translations by FUNimation, which is essential at times due to a few scenes where the Puchidols communicate with one another through said floating text.

Audio
Puchim@s: Petit Idolm@ster serves as one of the few FUNimation releases in recent memory that has been given a subtitle only release but considering the core cast of Japanese voice actors from the games have returned to reprise their roles and that the Puchidols only speak through small noises reminiscent of the idols they are based off of, this decision was for the best. 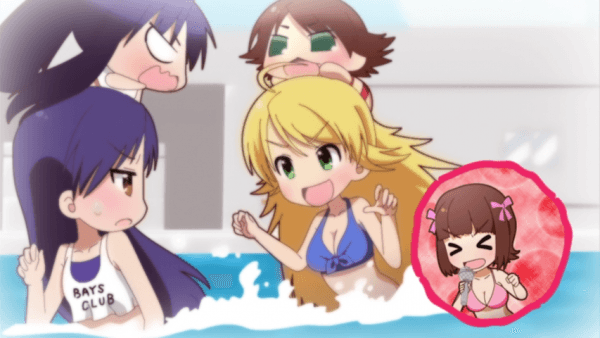 There isn’t so much background music throughout the series as much as small tones and dramatic sound effects used for humor while there are three different ending themes used throughout the first season, all of which feature a certain number of the 765 Pro idols singing an enjoyably fluffy mini-song as a closing theme.

Extras
The release of Puchim@s Season 1 comes with three OVAs which are mixed into the rest of the anime shorts, except they are a bit longer than your average five minute short and also features clean versions of all three textless closing themes: “Ar*i*ga*to Yesterdays,” “Today With Me,” and “Maybe Tomorrow,” and trailers for other FUNimation releases.

Overall
Puchim@s: Petit Idolm@ster Season 1 never tries to be anything more than a fluffy comedy series. With simple cute designs and minimalistic animations this first season is one that appeals to fans of the core franchise which works out very well despite FUNimation’s odd decision of separating OVAs leaving this release feeling unfinished due to their placement after the “celebratory” final episode on this release. With this first season introducing all of the Puchidols and giving everyone a taste of the type of humor the series focuses on, it’ll be interesting to see how the second season will manage to deliver.