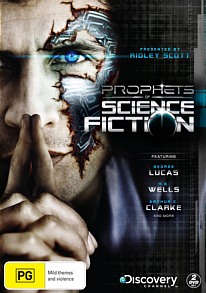 Prophets of Science fiction is an eight part series brought to life by a partnership between Executive Producer Ridley Scott and the Science Channel. The show focuses on how several predominant science fiction figures, ranging from Frankenstein author Mary Shelley to George Lucas, seem to have foretold many crucial scientific developments in their works of fiction.

It’s certainly an interesting idea to explore, and whilst the series does provide some historical insight into the figures and works it chooses to study, the links between these ‘prophets’ and the technology they have supposedly predicted is often a little tenuous. The information on offer is for the most part a fascinating insight into the lives of some prominent people, and linking their past and personal tragedies with their works is often as interesting as linking the works with the new technology it supposedly foresaw.

The eight chosen ‘prophets’ are all significant figures in their field – names you will have heard even if the faces are unfamiliar. All are authors from relatively recent times to fit with the creation of the genre, with only George Lucas breaking the pattern to shore up the modern end of the spectrum.  Lucas’ inclusion is a little mystifying when considering some of the authors that didn’t make the cut, and genre fans will no doubt wish that the director had been passed over in favour of Frank Herbert, William Gibson, or countless other authors who actually broke new ground with their ideas and concepts.

Each episode is prefaced by an introduction from Ridley Scott, with the Alien/Prometheus director acting as something of a host throughout the series. Scott’s love of science fiction is unmistakeable, and he makes a credible and interesting guide for the show. For the most part the episodes are narrated by Jonathan Adams, whom video game fans may recognise from several titles including Diablo III.

Fans of science fiction and literature in general will enjoy the biographical side of Prophets, whilst the links with present day technologies and issues ensures that it isn’t all just a history lesson. The Mary Shelley season opener provides a great example of what the show can do, linking Frankenstein’s life giving electricity with a paraplegic in real life present day, who thanks to the scientists at UCLA is moving towards being able to use his lower limbs again by having his spine stimulated by electricity. The scene also provides a much needed emotional hook for Prophets, as does further exploration into the often tragic and difficult lives of the authors concerned.

Anyone who has ever read the stories of Jules Verne (10,000 Leagues Under the Sea), Philip K Dick (Minority Report, Do Androids Dream of Electric Sheep?) or  H G Wells (War of the Worlds) will find something to keep their interest in Prophets, as the origins and future  fates of the ideas behind science fiction’s greatest works are explored with a firm eye on how these once fictional ideas have become a reality.

Unfortunately not all of links between these so called ‘prophets’ and the technologies that echo their ideas stand up to scrutiny. Yes, it is fascinating to observe how yesterday’s fiction becomes today’s science, but can Mary Shelley really said to have been that strongly linked to organ transplantation? The whole idea of these fictional ideas becoming reality is undermined by some vague and unconvincing examples, which is a shame because the rest of the show is genuinely intriguing. Attaching the word ‘prophet’ to the series may have been something of a mistake – doubting the credibility of a documentary, even on the smallest of issues, is not something to aim for after all.

Prophet’s is still a strong watch however, and linking the ‘nerdy’ domain of science fiction with real life developments should help to expand the audience a touch beyond those who are well versed in their sci-fi. 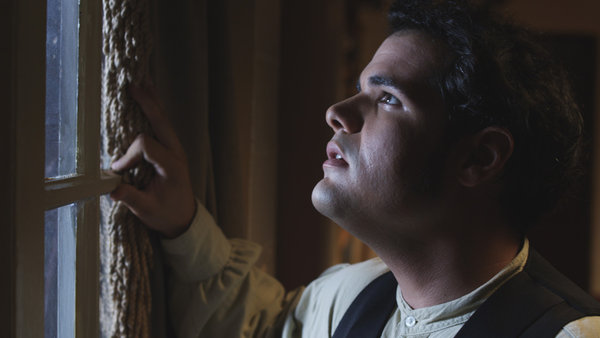 Prophets never has much opportunity to be outside the ordinary when it comes to presentation. Everything is solid, but when it comes to a show largely populated by talking heads there is little to get wrong. That said some of the period re-enactments feature hilariously bad hair pieces and come off as cheap and a little farcical – see the Philip K Dick episode for one of the best examples. The series doesn’t have quite the production values of a BBC documentary but is well put together nonetheless, with some talking head lens flare hinting nicely at the science fiction bent of the show.

The importance here is very much on the content, with presentation playing second fiddle to interesting tales and biographical details from some of science fiction’s best known names.  Things are kept dynamic via a mixture of talking heads, illustrations, re-enactments and animations.

The biggest problem with Prophets of Science Fiction is the title itself and the show’s insistence on the subjects of interest being so labelled. Each of the episodes is by and large a highly interesting watch for those interested in the subject matter, but the ideas and observations within seem a little too forced onto the whole ‘prophet’ framework. Whilst some of the authors are no doubt masters of their craft with extraordinary minds, the few exceptions that litter the series make the whole thing a bit wobbly. A recommended watch for those passionate about the history of science fiction and biography, but mislabelled nonetheless.