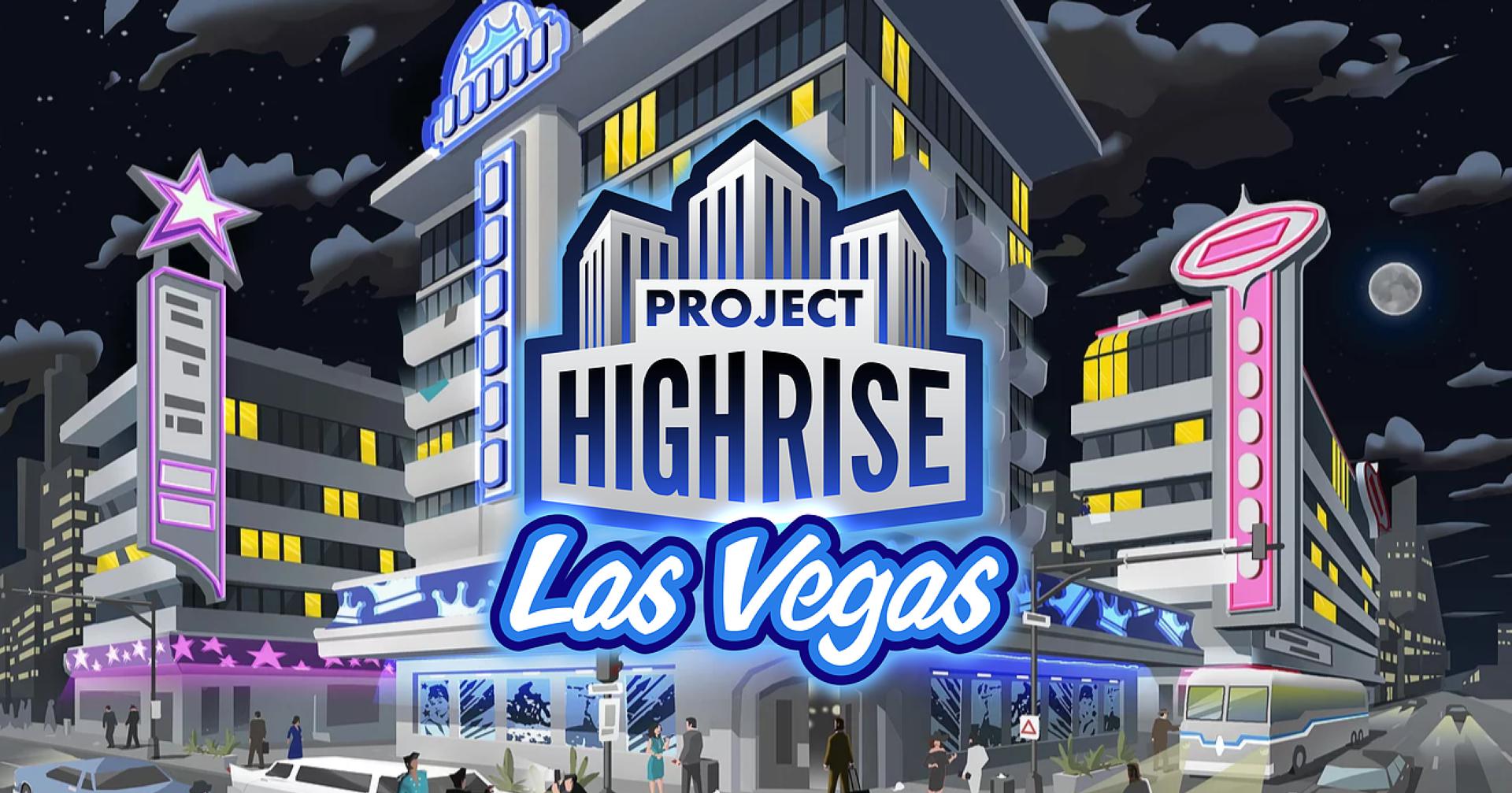 SomaSim is expanding the scope of Project Highrise, their spiritual successor to Sim Tower, with the new Las Vegas expansion. A stylistic homage to the days of the Rat Pack, the new expansion introduces the ability to build hotels. Players can now turn their towers into an attraction that draws visitors from far and wide by inviting musicians, hosting business events, and enticing gamblers to the casino.

As with the base game, Project Highrise: Las Vegas does not have much in the way of a plot. There are some new scenarios that have a few sentences that give some background to the scenarios, but that is about it. In general, the writing in the new expansion is clear and polished. 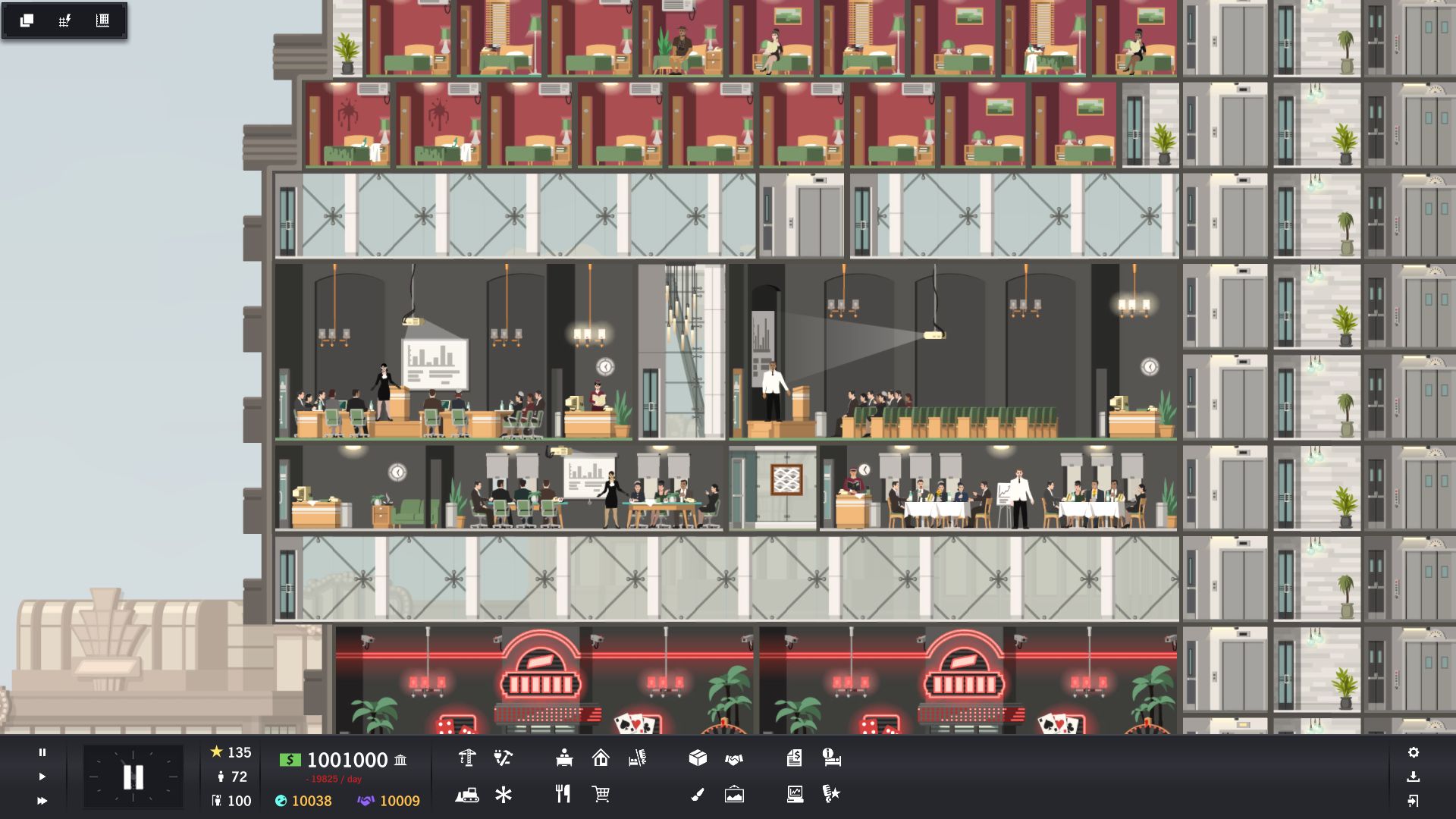 Project Highrise: Las Vegas adds an entirely new option to tower builders. Hotel guests are a special type of visitor to the tower that will stay overnight in a hotel room and enjoy the building. Like residential and business tenants, hotel guests require their own set of amenities to keep them happy. House keeping will need to be hired to clean the rooms after guests leave and larger, fancier rooms will require more amenities like luggage service. Guests will demand the latest and greatest in comfort, so the expansion adds the new HVAC utility. Filling rooms takes a little more than a few good reviews. Tower owners will need to build conference rooms and concert halls so they can book business conferences and musicians to bring in paying guests who are willing to pay a little extra to attend the event on top of the hotel stay. Of course, it isn’t Vegas without the addition of a few casinos. With the help of the new tourism consultants, tower owners will be able to snag a license to build casinos and attract gamblers.

The addition of hotels smooths out the gameplay in Project Highrise. The change is subtle enough. Rent is normally paid out every night at midnight. Hotel rooms on the other hand pay out when the guests check out during the day, giving players a much-needed mid-day cash boost. I found having hotels had a significant effect on the flow of the game. Before, I would often find myself making changes to the tower right after rent came in, then spend several minutes waiting for the day to pass so more funds would be made available. With having some hotel rooms in my tower, I found myself dealing with much shorter stretches of time where I stared at the clock waiting for enough money to start building again. 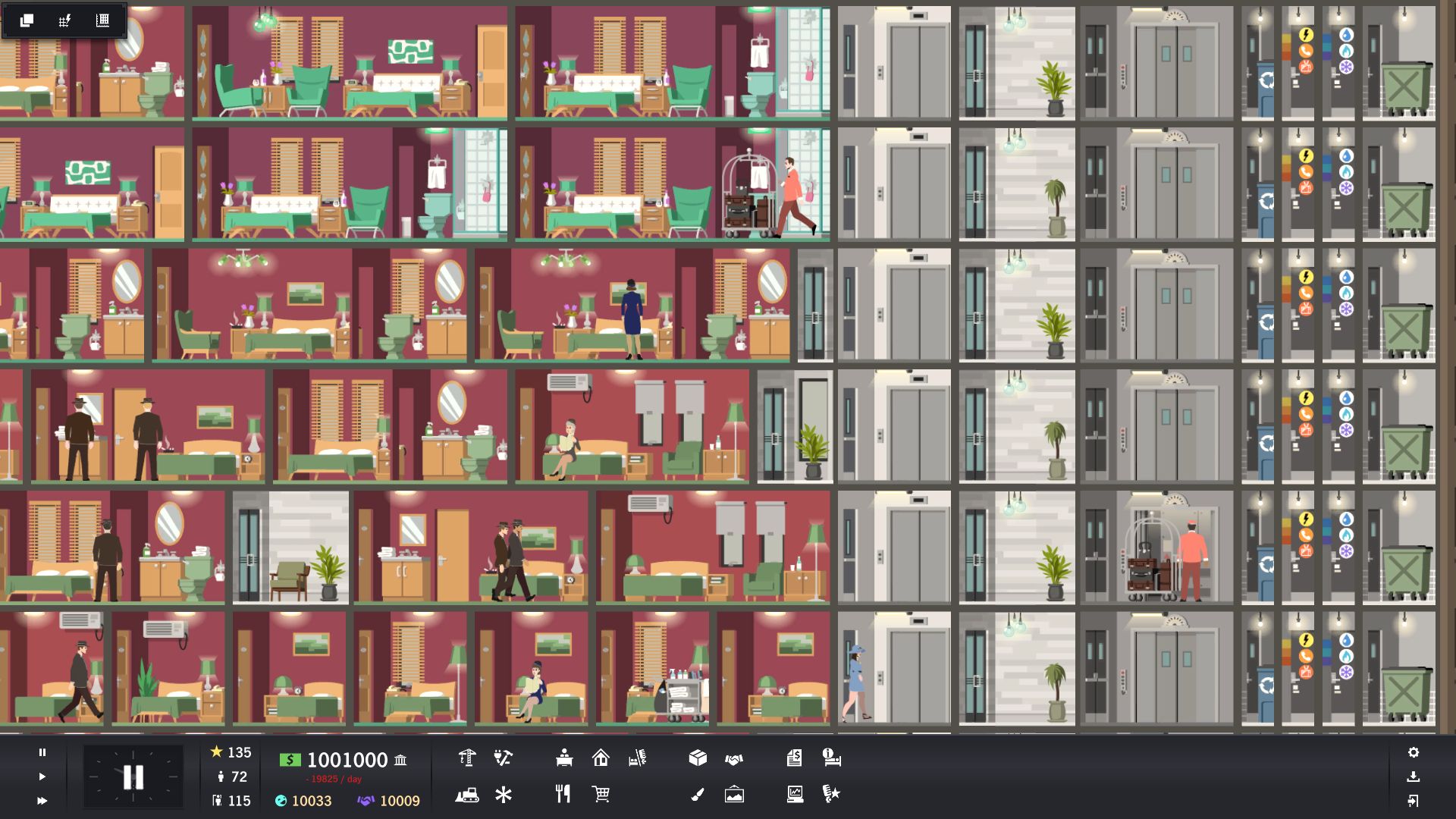 The new content is integrated well into the game. The new buttons take up previously empty space on the UI. Most of the data is displayed independently of the base game, which is a good choice as hotel guest information tends to need extra attention. The expansion comes with several new scenarios, but they are a little hard to identify as they are tucked into the bottom of the scenario list without any indication they are Las Vegas scenarios. A small icon would have helped identify the new scenarios.

I really like the new content added in the expansion. While the new additions share basic concepts, the Las Vegas content behaves rather differently than the content from the base game. Hotel guests are a special visitor type of their own, and their opinions feel like they have greater short term consequence over tenants. Having booked talents require special accommodation and provide reviews with greater impact than the average visitor was an excellent touch that screams the glitz and glamour of Vegas. The tight relationship between the rooms added in the Las Vegas expansion can be a bit tough at times to squeeze in other rooms, but in the end, the content makes Project Highrise feel like a more complete game. 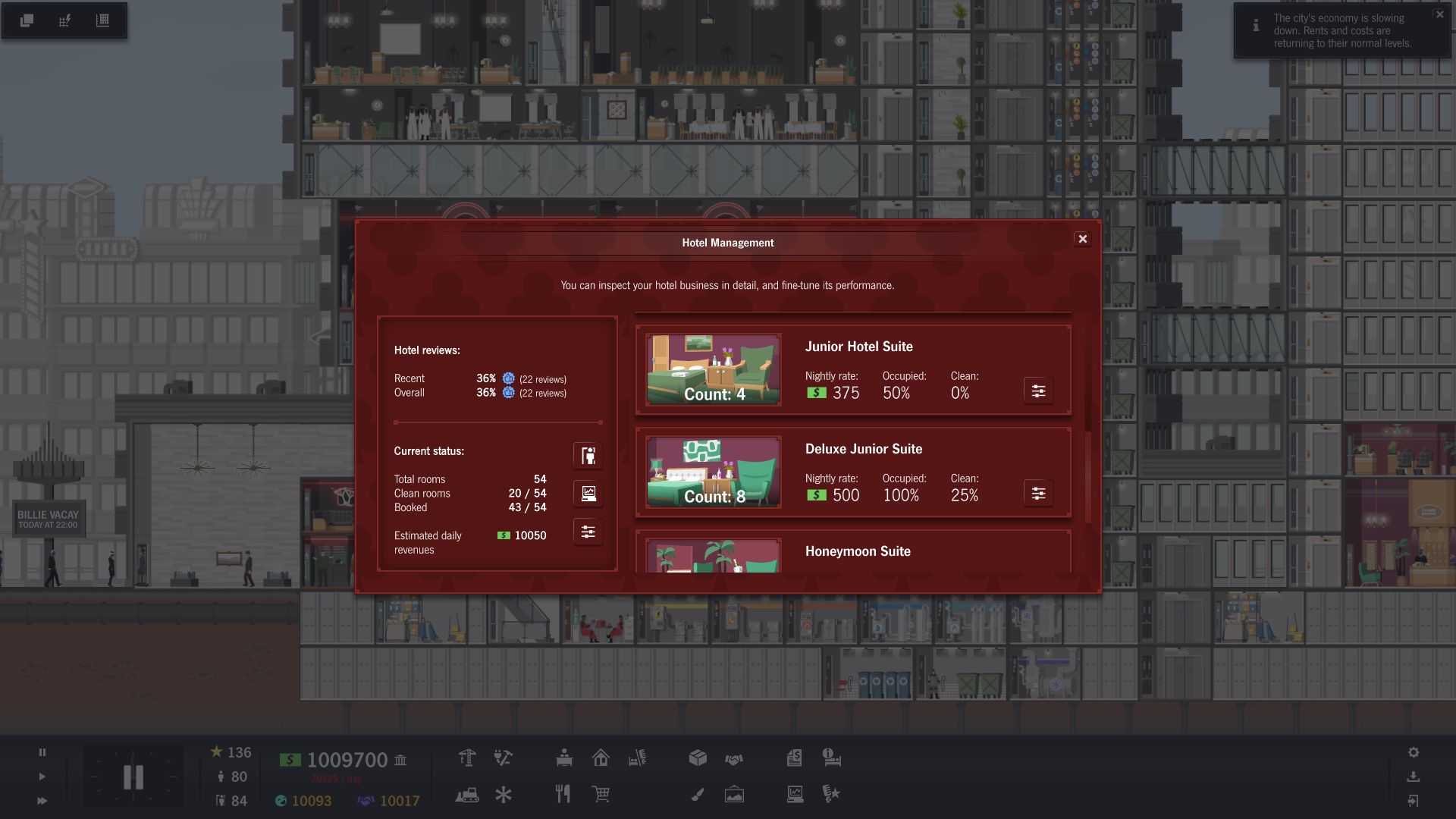 The new additions fit in nicely with the base game. The Las Vegas content is a little more vivid than the heavy earth tones of Project Highrise, opting for some more vibrant shades of red and flat blacks. Yet the artists still managed to choose shades that blend in well with the 80s tones from the base content. The overall style definitely channels a little 60s Vegas flair with the incandescent bulb marquees and the over the top glamorous style.

Project Highrise: Las Vegas delivers a solid audio experience, albeit a small one. The new sound effects are excellent and fit into the Las Vegas theme quite well. The new menu music is an excellent remix of the old song that is a bit more upbeat. I do wish, however, that the expansion came with a few more new songs to listen to, as the extra variety would make long marathons more enjoyable. 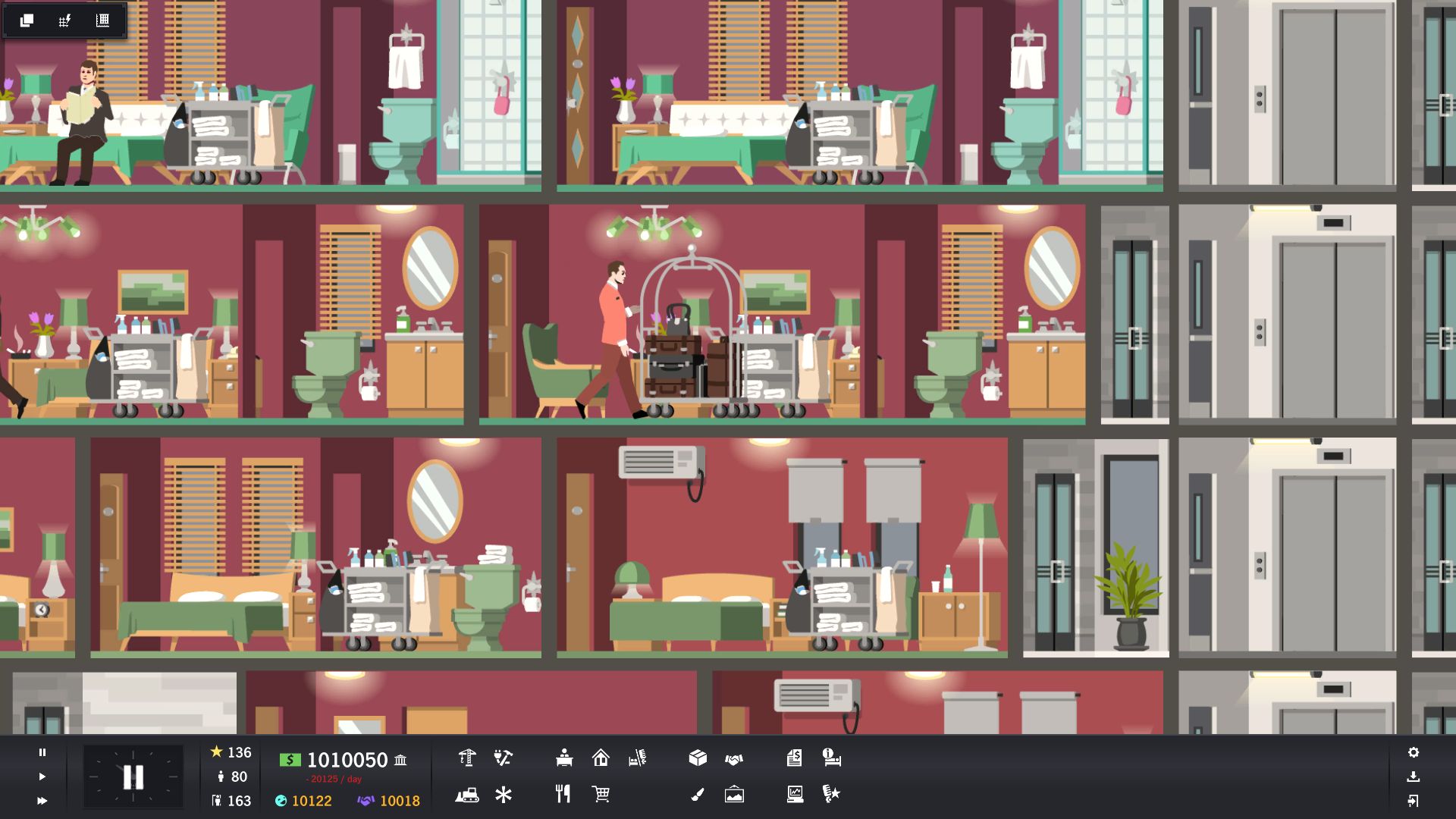 Project Highrise: Las Vegas is an excellent example of what a proper video game expansion looks like. It takes an already solid game and improves upon it. The expansion adds some meaningful new content and melds it in beautifully with the old content. The best part about the Las Vegas expansion is how it smooths out the gameplay experience with the simple addition of a new time slot for income. If you already own Project Highrise or you plan on buying it, do yourself a favour and grab Las Vegas too.

Project Highrise: Las Vegas is a must buy for anyone who owns the base game.
9