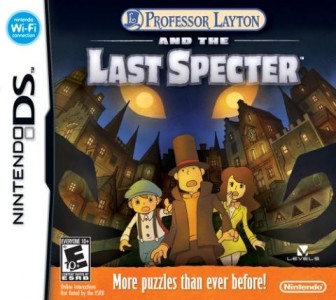 Overview
Originally releasing in Japan two years ago, Professor Layton and the Last Specter has finally crossed seas and been fully translated for western audiences. This title plays nearly identical to all of it’s predecessors, but begins a brand new story arc, taking place years before the events in Professor Layton and the Curious Village. Even though the gameplay is nearly the same, loyal fans of the series will find nearly 200 puzzles to solve and meet several new characters throughout brand new mystery. As a bonus, Last Specter also offers up the very ambitious RPG titled “Professor Layton’s London Life”, which adds over 100 hours of gameplay and is available from the start. As you can easily tell, this prequel offers more, but how well does everything tie together? Let’s take a trip to Misthallery and find out. 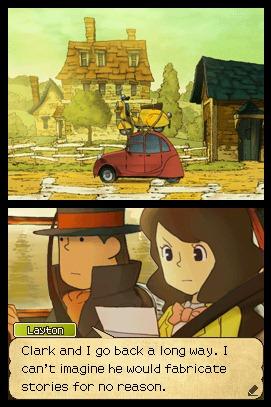 Story
After receiving a mysterious letter, Professor Layton and his newly assigned assistant Emmy set out to the town of Misthallery, where a dark beast known as the Specter has been destroying buildings and throwing the townspeople into a state of fear and confusion. Never one to turn down a good mystery, Layton and his new partner arrive in this small village shortly after, soon discovering that the author of the letter is none other than Luke Triton. Even at a younger age, Luke is ready to join in on cracking this case, and Layton happily obliges as the trio make it their duty to uncover the secrets behind this dangerous being.

You see, this title marks the first true encounter between Layton and his soon to be apprentice, and in my opinion provides the most intriguing story the series has ever told. As I mentioned, Last Specter takes place a few years before Curious village, but that small time gap doesn’t really lead to many personality differences between the puzzle-solving duo. The slightly younger Layton is as logical and wise as ever, and while a bit more immature, Luke still is very eager to dig for clues and impress his new found mentor. Emmy is new to the series, but it’s really hard not to like such a spunky sidekick who is just as charming as the rest of the cast within. 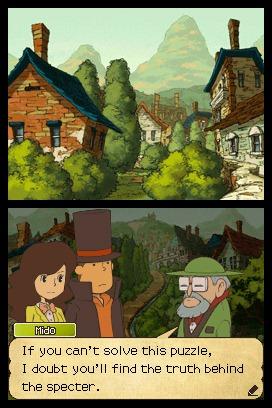 Like all Layton games, the townspeople play a full part in making the town of Misthallery come alive. The writing is clever, offering a chuckle from time to time and each quirky inhabitant you come across is distinctly different from the next. These varied personalities come together to paint a vivid picture of this town’s atmosphere and due to how well this is executed, Misthallery’s exciting and mysterious plot is easy to get immersed in and makes this yet another Professor Layton title that feels almost impossible to put down.

Gameplay
Professor Layton and the Last Specter is nearly identical it’s predecessors when it comes to the way the game is actually played. Structured like a “point and click”, the player must explore Misthallery and gather clues by investigating every inch of the landscapes provided. If a citizen is roaming about, they can be fully interacted with, setting up a small dialogue sequence at the tap of a stylus. Any clues gathered go into Layton’s handy trunk, which can be accessed at any point during the game and offers a nice way to get caught up if you happen to forget what to do next. The city is never quite free-roam, as while paths are open everywhere, there is usually an grumpy officer or confused citizen to block the way, keeping you focused on your objective at hand. 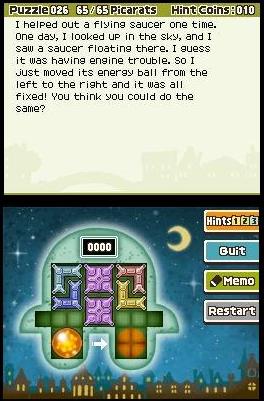 The puzzles are the true meat to this dish. Each character you come across usually has a puzzle to be solved. These brain-teasers range from common match problems, slider puzzles, or simple logic deduction and are sure to test your wits as you uncover more details about the mysterious specter. Now with that said, not much has changed with the types of puzzles seen in Last Specter, but the difficulty slowly ramps up as the player progresses and keeps the game fresh due to the vast quantity and variety offered. If you get stumped, you can use a hint coin to offer a bit of insight, and continue doing so until the pricier “Super Hint” is provided. These super hints pretty much paint the answer out, but I had to use them a few times as the later puzzles are sure to have you scribbling possible conclusions on your in-game memos and even pulling out a calculator at times to find the proper result. Sometimes the answer will be right in front of your face or just plain obvious, but the game never gives the feeling of simplicity so each puzzle must be tackled with the same problem-solving mindset. This element makes even the easiest of tasks feel like a pure achievement and with nearly 200 conclusions to be had, there are rewards a plenty for those who stick it out throughout the game’s entirety. 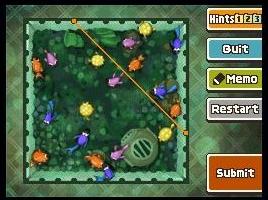 There are plenty of sights to see and tests to be passed, but the game offers many other activities that are sure to keep players busy for a good time. Located in Layton’s trunk are three different mini-games where levels are unlocked by progressing further into the story. These include the likes of a toy train romp, where you must set tracks so the locomotive can correctly land at all it’s destinations, a game involving the guiding of fish to gather coins, and a delightful puppet show where the player must fill in the missing script pieces and watch the result play out on stage soon after. Like the puzzles in the main game, this trio gets progressively more challenging as extra levels are added and due to their clever and casual nature, I found myself constantly going back in for more and thirsting to find that next stage to unlock in the main story. 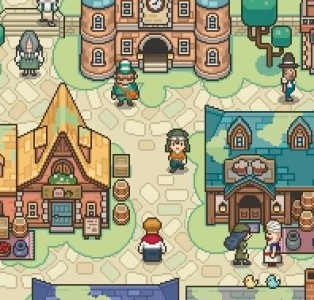 Even with all it’s extras, Level-5 included an entire second game on the cartridge of Last Specter by the name of Professor Layton’s London Life. This game feels like a mix of Animal Crossing and The Sims, as the concepts are relatively the same and it has the same addictive gameplay stylings to keep you immersed and interested. Players start out by choosing an 8-bit avatar and some pre-set personality traits, and must interact in a small village with several cheerful residents. To earn currency, you must perform jobs and tackle tasks for London’s inhabitants, which can then be spent to upgrade your home and clothes. As odd as it sounds, there is a class system in London Life that locks the player away from accessing certain shops and events until they can afford to don the higher class threads. It’s not as political as it sounds though as the game’s intentions are tounge-and-cheek, and the charming 8-bit visuals along with the mass amount of dialogue and campy themes make it easy to return to London over and over again. There is always something new to do, upgrade, or obtain in this little but huge side-game, and after 10 hours of playing London Life alone I feel as if I just merely scratched the surface on all of the offerings within.

Visuals/Audio
Much like the rest of the franchise, there is a lot for the eye to see in Professor Layton and the Last Specter. The painting like art-style remains in tact and is given even further life as each character have more detailed animations during dialogue sequences and cutscenes. Speaking of cutscenes, players will feel as if they are watching a full anime production as these moments of story-telling play out. Even though this game is dubbed, each character’s mouth moves appropriately with the dialogue and the DS handles all of the constant animation like a champion. Each environment is also elegantly detailed and due to the large amount of interaction, the player will be able to learn about nearly every item they come across by just tapping it with the stylus. The small town of Misthallery benefits greatly due to it’s visual quirks and has quickly become my favorite setting for the franchise thus far. 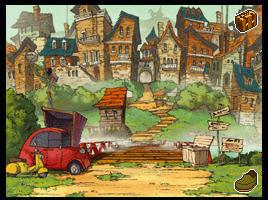 A good amount of the dialogue is spoken within the game and thanks to the solid performances given, its easy to get swept up in this story, only to notice that six hours have passed since you last seen sunlight. Yeah, the voice acting does that much to the plot. It isn’t just the voices though, as the sound effects and music used shine through to capture their setting during cutscenes and make each encounter with the monstrous specter even more exciting. Aside from a few new tracks that are used to capture the dark tones of some of the story, this Layton title still retains that same music style of the previous entires. That statement isn’t really to say that the music is bad by any means, as the accordion melodies still fit in fine and give Last Specter the same sound (and feel, even) as the rest of the series.

Overall
Level-5’s Professor Layton series hasn’t changed much over the years, but the same could be said about nearly every other franchise on the market. The story told in Professor Layton and the Last Specter is the most gripping one yet and players finally get more backstory on both Luke and Layton while encountering new characters in the process. The puzzles also feel familiar, but still remain fun and rewarding to solve due to the constant offerings of variation. Seeing how this title is a prequel, it’s also a perfect starting point for those new to the series. All of that in one cartridge would have been fine, but the inclusion of Brownie Brown’s London Life shows us that this Professor still has new tricks up his rather large hat and I certainly would love to see more of this massively charming “side-game” in the future. Is Professor Layton and the Last Specter adding to a DS collection? You bet your Picarats it is!