The game developers at Chilingo deliver an upgraded, iPad version of ‘Pro Zombie Soccer’ originally for the iPhone, dubbed “Apocalypse Edition” the title says it all really. Here’s another zombie game bringing over-the-top action, story and zombie killing madness to the iPad and it’s not that bad at all providing a simple, fast pace action game for anyone on the go or with some time to kill will enjoy this game. 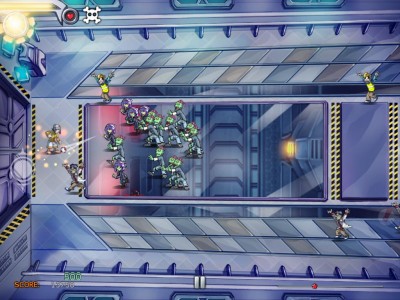 The story, sure not the best but hey for a zombie soccer game it’s what come to you expect. The story is ridiculous, over-the-top and quite humorous at parts. The story itself is told through cartoony text based cut-scenes which set up the following scenarios and setting, and yes they are quite cheesy and you can choose to skip them if you just want to cut straight to the action. You play as Jax, a star soccer player who on one night gets bitten by zombie superstar soccer player and somehow inherits soccer superpowers and uses them to take on the undead in the mitts of transforming into a zombie himself. From then on you fight wave after wave of zombies, nothing really new here but the story does provide some occasional funny bits and a nice break from killing zombies. 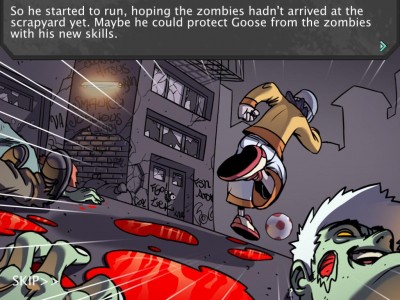 Taking on wave after wave of zombie foe requires skill to rack up a high score. As a skilled soccer player, you ball is your weapon. Jax remains stationary while zombies approach from the right hand side, aiming and firing is controlled using the same button and is very easy to get the hang of, holding down the button will charge up Jax’s shot for ‘massive damage’. Power-ups are also through into mix and they are very rewarding and satisfying to use, as using them properly can either make or break a round. Jax’s super soccer powers grants him three power-ups lightning ball, piercing ball and laser. The first, ‘lightning ball’ slows down time allowing for faster kills, ‘piercing ball’ as the name suggest pierces through multiple enemies at a time and the last ‘laser’, well… you somehow gain control over a giant satellite laser which targets multiple enemies at a time. 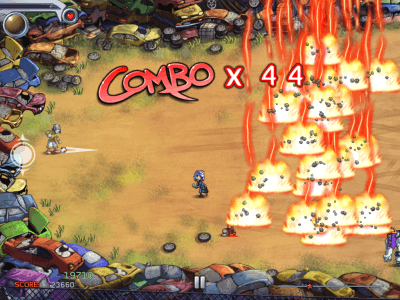 Overall the game sort of plays out likes a mix between pin ball and tower defence, it’s really quite fun but at times the game can feel a little too easy, especially when you have one your power-ups turned on and since all enemies eventually funnel into the centre, just spamming the firing button clears out any feeling of being too overwhelmed. Aiming can get frustrating at times as lining up shots can be quite difficult and are often not completely accurate. The game does get tougher later on with the introduction of enemies that can only be taken out with a precise one hit kill weak spot “Nutshot” anyone? Also, controlling the ‘laser’ with the iPad’s accelerometer (tilting the iPad from side to side) is quite awaked, clunky and again quite frustrating as it is quite slow to respond to your movements. Also, there is no quick play option which may put off some players but you can replay missions once you have beaten them. Aside from this, gameplay is genuinely quite good. 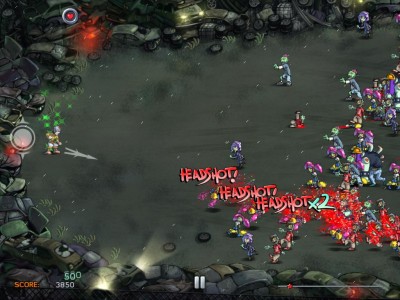 The graphic in Pro Zombie Soccer Apocalypse Edition are presented well with slick cartoony visuals. An improvement over the iPhone version, ‘Apocalypse Edition’ boasts HD graphics thank to the developers specially redesigned the game’s backdrops to fit the iPad’s large screen. Character animations are very slick and seamless, which particularly look great in a final kill where the game slows down to focus on the final gory death, yet they can get repetitive as you will be seeing the same death animations over and over. The game also features original music which is pretty good and suits the game very well. Fast pace rock music will play for your zombie killing pleasure, which is exactly the type of music you want to hear when playing a game like this. 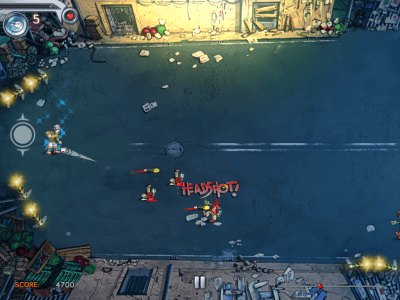 Pro Zombie Soccer Apocalypse Edition is a very decent game, providing simple yet action packed gameplay which is enchased all the more with fast paced rock music. Later levels in the game do take some time to beat as very precise shots are required to beat certain enemies but once you get the hang of it you’ll have a blast playing this game. Considering the game’s relatively cheap price, this game is easily recommendable to anyone wanting a fun, original, humorous, zombie killing experience.

I give Pro Zombie Soccer Apocalypse Edition for the iPad: