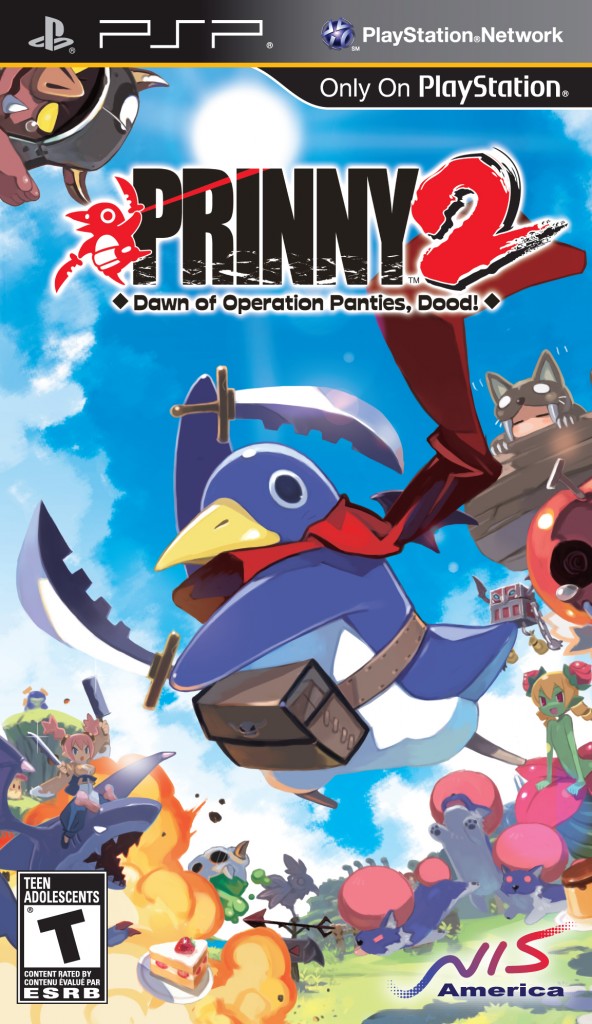 Overview:
Now many of us may be familiar with the Disgaea strategy RPG franchise. It has been one of the core SRPGs since its creation and has always been critically acclaimed. Now while Etna, Flonne, and many other characters have played larger parts in past Disgaea games the most memorable characters are the Prinnies. Cursed human soles woven into the body of an explosive penguin and cursed to do menial labor for their demon lords.

But life can’t be all bad for the Prinnies dood especially now that they have a game made specifically for them. Prinny 2: Dawn of Operation Panties, Dood! brings us the second installation of the side scrolling platformer starring the Hero Prinny. Now with one of the most peculiar sounding titles that we’ve seen in a few years Prinny 2 is to be released in a few weeks and we’ve got our hands on review all set.

Story:
The Prinnies lives have always been one of servitude and rarely do they ever have the chance to be in the spotlight. Now of course in Prinny 2 they have yet another chance to shine. One day in the middle of the night a Phantom Thief (named the same as who he is) has stolen a rare item from Demon Lord Etna. Now this rare item can cause the destruction of the entire Netherworld now that it has been taken by this thief. But what exactly could this rare item be? Why it is Demon Lord Etna’s panties. Yes the whole centerfold of the story is the fact that Etna’s underwear has been stolen by a thief who hunts only rare items, and if she doesn’t get them back by the end of the night she will destroy the Netherworld because she will be pissed. 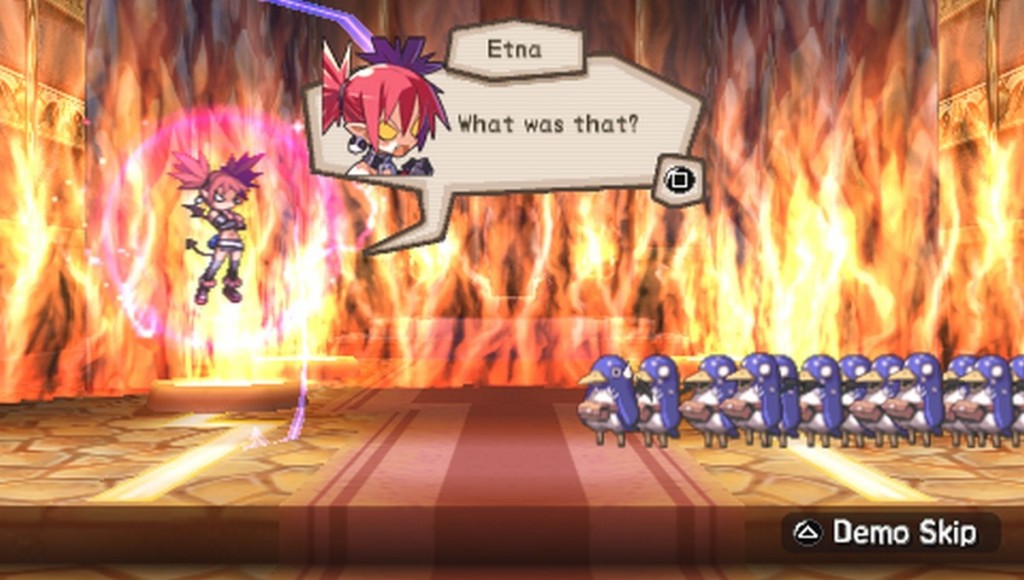 Now it is your job as the Hero Prinnies to capture this thief and return Etna’s underwear back to her and avoid her wrath. You will do this by venturing out to six different Netherworld stages and retrieving other rare items to help lure the thief back to the castle so you can once and for all defeat him and retrieve the panties from him. The levels can be chosen at your own pace and increase in difficulty as the night wears on. Unfortunately while you may see a few Disgaea characters that you recognize, a lot of the characters will not be explained or given any background information. Sure you may know who Etna is, but not who Flonne is even though they converse as if good friends. There are plenty of laughs to be had as well as the Prinnies not only make jokes amongst themselves but at bosses expense at well. At the same time however those who do not know much about the Disgaea characters will still miss out on inside jokes that only those with background knowledge would understand.

Graphics:
Prinny 2: Dawn of Operation Panties may have some of the best graphics of its kind on the PSP dood. The graphics are very bright and gorgeous and are exactly what one would expect to see in a game with an Anime like feel to it. Each region you explore is full of monsters and plenty of details to make it unique compared to the other stages that you can venture too. The characters themselves are very well designed, and although there aren’t many actions taken by some of them they are very great to see. 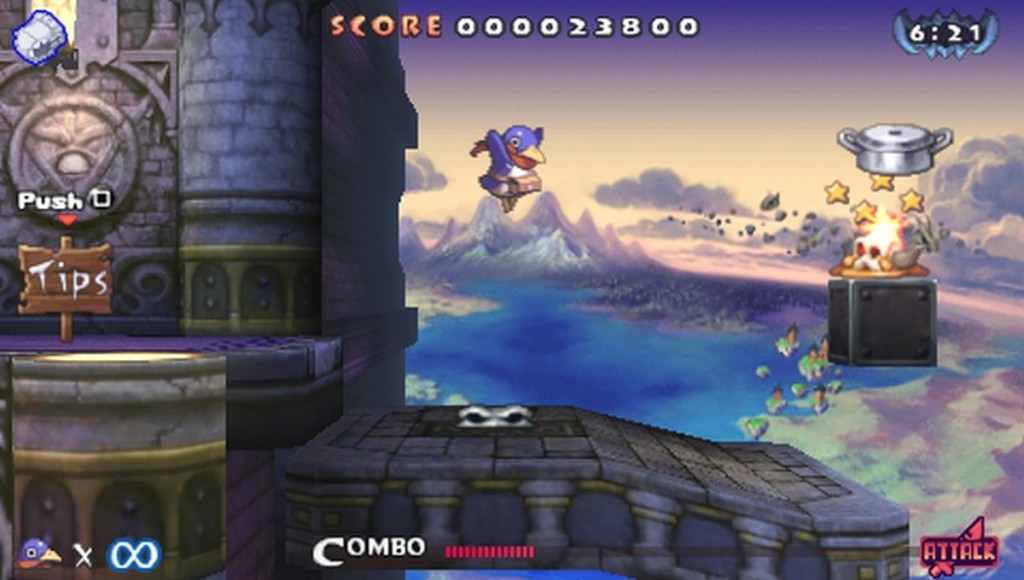 Besides the Prinnies themselves you will see a variety of different enemies that are fully rendered in 2D and often match the world in which you are visiting though there are occasional repeats. One thing however that can be noted is that Prinny 2 does have some slowdown during parts of gameplay. This wouldn’t be an issue usually but thanks to the high difficulty level of Prinny 2 one can expect occasional slowdown to cause the death of their Prinny. This may not be much of a problem when you are playing on the Baby difficulty, but on any higher difficulty level it can cause unnecessary frustration.

Audio:
Each of the characters inside of Prinny 2 possess their own voice over work done by their classic voice actors. For the most part however Etna’s voice sounds slightly different at times but this is usually something that will not be noticed by most players as the enjoyment of listening to her voice actor (Michelle Ruff) is still there. The bosses each have their own names and are often named after ingredients one may find in the kitchen, including one trio of enemies whose names spell out a few spices but always refer to themselves in their own parts. Also even though you meet many different Prinnies outside of battle they all have their own voice actors which is another nice touch rather than making them all sound alike. The background music is also quite nice as each Netherworld stage will have a different tune to go along with it and matches said stage perfectly.

Gameplay:
Prinny 2 is a hardcore platformer to it’s core. As you begin the game you will first be given an introductory level where you will have infinite lives and be given a variety of different tips that will teach you the ropes of what to expect inside the game. Before all of this however you will be able to select your difficulty level which will include Hell’s Finest, Standard and Baby mode. The most noticeable (and partially recommended) difficulty is Baby Mode. Rather than having scarves to show your health level you will instead have diapers to signify the amount of damage you can take plus there are the addition of breakable baby blocks which will give you some easier jumps. 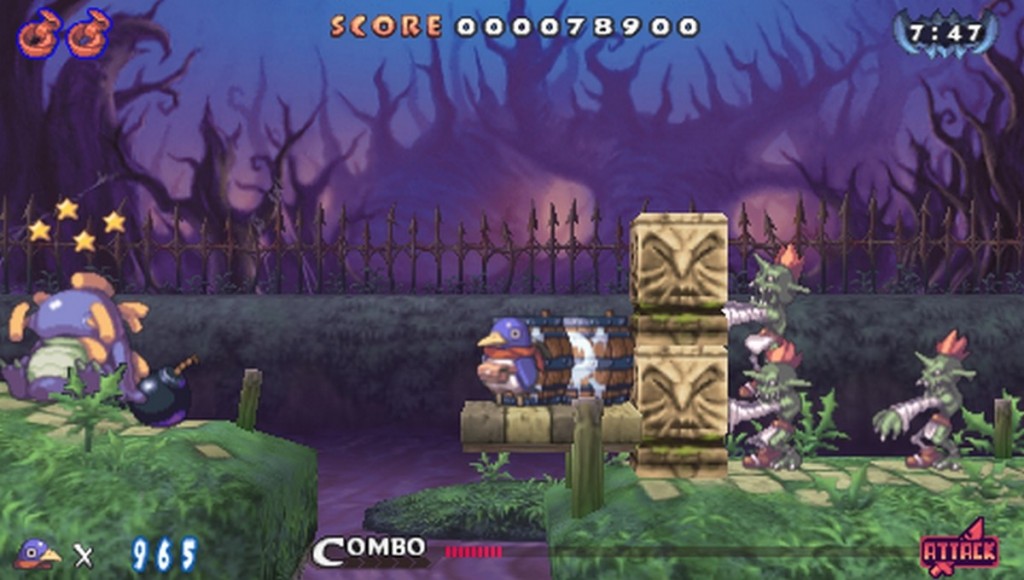 The reason that I mentioned that Baby mode would be recommended is that this game is very difficult. While most 2D platformers can claim the title of being a hard game, Prinny 2 takes the cake (in more ways than one) in this category. The first thing that you will notice that will signify the difficulty level is that you are given 1000 lives right off the bat. Meaning that as you lose lives throughout the game you can watch your life level slowly dwindle down. The reason that your lives dwindle is because the jumping mechanics are a little tough to get used to, especially considering you can not alter your jumping path once you are in midair. What this means as though you can double jump, if you jump straight up twice there is no way in the slightest to adjust your momentum. You can use your first jump to go straight up into the air and then use your second jump to move forward or backwards but this jumping mechanic does take some time to get used to and feels heavy handed and not the most suitable for an already difficult platformer.

Now not only is the jumping hard, but the combat and final bosses as well. The main idea of the combat is handled through performing hip pounds to stun enemies and slashing attacks to finish enemies off. You do not need to stun most enemies to kill them, but it is recommended as they can hurt you with the slightest touch. Bosses especially are only able to be truly hurt after they are stunned by a hip pound. Once you have performed enough combination attacks you can enter a Combo mode which gives your Prinny blades even more power and kills enemies faster. There are also special moves such as the Prinnikaze and Husky Hip Drop that can be performed by holding the R button and performing your standard attack. Combat is mostly satisfying but there are times that you will experience difficult boss fights that will whittle away at your total life count severely.

The reason I mention times is the fact that considering you only have 10 hours to find Etna’s panties and time passes as you finish each stage, increasing their difficulty. This means that there are many different paths you can take through a level, as sometimes you may not be able to beat a certain boss once you have made it down to the last stage, but you can choose different stages next time around and face not only different bosses, but different levels as well. This means that the replayability is extremely high as there are multiple paths to take through the game. 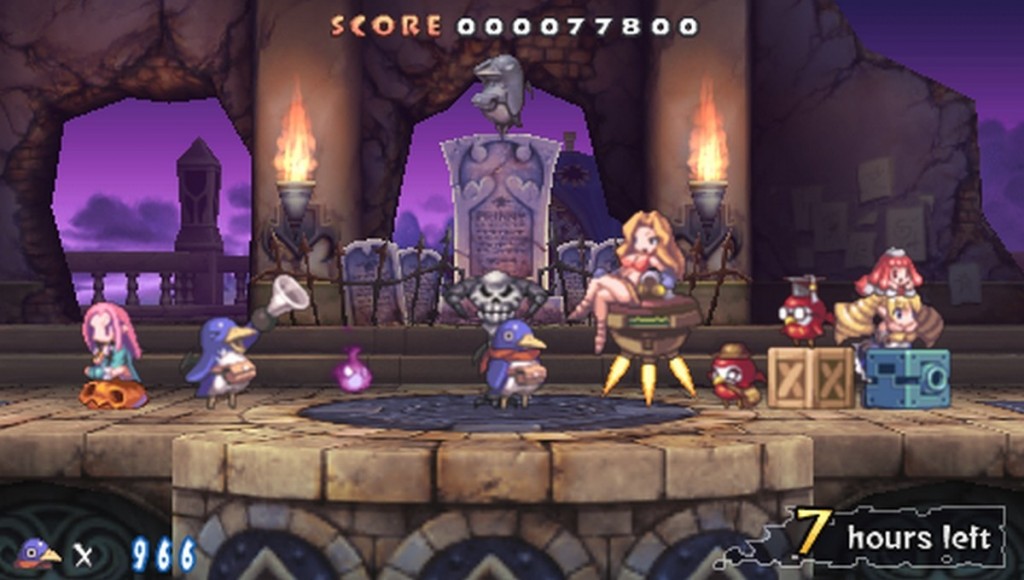 Beyond the replayability is the fact that there are multiple collectibles inside of the game. There are numerous soul orbs you can collect that will unlock different options to upgrade your Prinny Base. There are 120 different dolls to collect inside of the different stages that can be traded in to get special items as well as special tickets that unlock the partially hidden Asagi Wars game once you have completed the Prinny 2 storyline. A small hint however to those looking to access Asagi Wars, you must first gather the ticket pieces which appear above your Prinny base before going to each level so that you do not miss this extra game.

Asagi Wars Side Cover:
Asagi Wars is an unlockable second game that is within Prinny 2: Dawn of Operation Panties, Dood! and it features the human Asagi transformed into a Prinny due to her unfortunate demise. Unfortunately countless other Asagis have tried to claim themselves as the real her and are attempting to take her place, so it is up to you to make it known that you are the true Asagi. The gameplay itself is quite similar to the standard Prinny 2 with a few differences. For example each boss you fight will be a different Asagi, such as an 8-Bit Asagi or even Asagi Scharwznature. Also rather than having a health bar where you will lose increments you will instead have a “rating” meter where you have to constantly keep the action going or else you will lose.

The action is handled more of in a Contra style way with multiple weapons that you can acquire and use, though the eggplant is always a handy weapon in and of itself. You will use these various weapons to defeat the enemies and the bosses that stand in your way. The mode itself is a great addition and feels like it warrants a game itself and is best labeled as a game within a game. It is quite enjoyable to see Asagi do battle with the fake Asagi’s and just as funny, if not more, than what you will experience playing the main storyline of Prinnny 2.

Overall:
While Prinny 2: Dawn of Operation Panties, Dood! may be quite difficult it is not an insurmountable task. There are countless routes to take and plenty of ways that you can reach your goal in retrieving Etna’s underpants. The initial difficulty may be a daunting task to some and be warned again of how difficult the game can be, it is certainly rewarding when you finally finish a level. With its pedigree cast of characters such as Etna, Flonne, and of course the Prinnies fans of the Disgaea series will be hard pressed not to take a look at Prinny 2. With gorgeous graphics and perhaps one of the most humorous plots you can find Prinny 2: Dawn of Operation Panties, Dood! is going to be a hard one to pass up when it releases in just a couple of weeks.

I give Prinny 2: Dawn of Operation Panties, Dood!