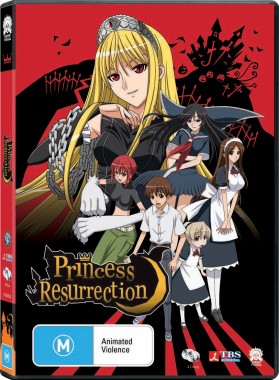 Immortality sounds like a great idea on paper, to live life without the fear of ever dying. However, nothing in life comes for free, and for something as grand as immortality a hefty price must be paid. In Princess Resurrection, Hiro Hiyorimi learns this lesson the hard way.

This Princess Resurrection collection contains all 24 episodes of the main anime series with two additional ‘Extra’ episodes included as a bonus. There isn’t really anything in the way of extras as all it really contains are clean opening and ending theme songs as is the case with most anime home releases. The anime was created by the highly respected Japanese animation studio, Madhouse, known for some great animations like Ninja Scrolls, Vampire Hunter D, and Death Note.

Princess Resurrection takes you on an interesting journey in a world where supernatural beings live seamlessly among the humans, and along the way you will go on this rather strange emotional rollercoaster but with some interesting character development. 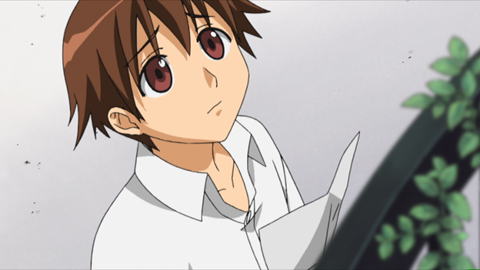 Hiro Hiyorimi is an 8th grade high school student who moves into this quiet and mysterious town to live with his older sister, Sawawa Hiyorimi. Sawawa lands a job as a live-in maid of a mansion, and as such is able to accommodate her brother. However, as soon as Hiro arrives and explores the area on his own he meets a tragic twist of fate, as he finds himself crushed under construction beams in an attempt to save a mysterious woman dressed in rather regal and gothic attire. His selfless act of heroism leads to an untimely death, or so it seems.

The mysterious woman he saves actually turns out to be a princess of grand royalty known to everyone as ‘Hime’, the daughter of the King of Monsters. To award Hiro for his selfless heroism, she grants him the gift of ‘half-immortality’ with some rather useful instant healing powers, but it’s hardly an award as Hiro soon realises that he must now forever serve as an immortal soldier to Hime in order to stay alive. Hime needs to pretty much recharge Hiro’s life from time to time, thus creating a purely unplanned and circumstantial partnership that Hiro never really asked for.

Right from the get go, Hiro finds himself fighting alongside Princess Hime against a wide range of adversaries, which include werewolves, zombies, Egyptian mummies, vampires, and all sorts of sadistic creatures. He is constantly going out of his way to protect Princess Hime and finds himself getting killed several times in much similar vein to Kenny from South Park. Along the way he meets some peculiar supernatural friends and foes. 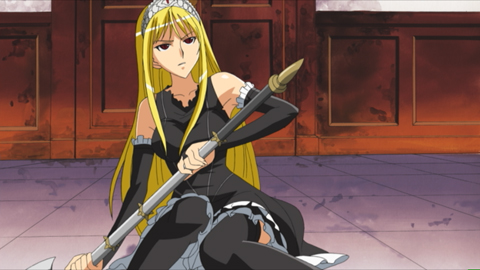 It’s a strange series in the sense that it at most times feels like a slice of life anime with a huge supernatural twist, with a hint of harem elements as Hiro is pretty much always surrounded by women, both human and supernatural. The tone of the episodes are mostly light hearted and humourous, but there is a main underlying plot surrounding a power struggle between Princess Hime and her siblings, as they fight to claim the throne and become the sole King of Monsters. That underlying plot creates some dark and serious undertones, and allows for some interesting character development and backstory.

The characters are an interesting and quirky bunch. Princess Hime appears to be a very cold, stern, and regal type of person who does a great job at maintaining her composure regardless of the situation. She’s pretty skilled in combat too when need be, demonstrating good use of weapons, especially the chainsaw. Then you have several support characters like a tomboyish half-human-half-werewolf and a miniature android maid who can only utter one word “Huga”. There is enough character variety, with each given enough focus and development.

The pace and progression of the show works out nicely as we get to see relationships between the characters develop, in particular the relationship between Hiro and Hime. There is plenty of comedy and a ton of action, with some rather crazy but hilarious horror elements thrown in.

Once it’s all done and dusted, there isn’t anything particularly memorable about Princess Resurrection, if anything there is too much inconsistency in the general tone and style of the show, it switches between random slice of life comedy and serious supernatural action. The main plot doesn’t really get resolved by the end of the series, ending just when things seem to be picking up. Instead what’s really developed and resolved by the end of the show is the relationship between Hime and Hiro, but unfortunately, like with most modern anime couples, their dynamic doesn’t really have a mature and compelling chemistry even if the circumstances of their relationship is amusing. All it really is a young boy with a crush on a much older woman, with some moments of emotional spark but nothing more. 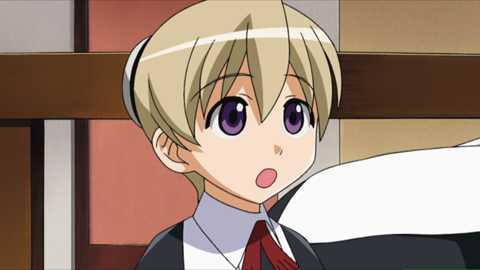 The show has some pretty decent but generic character designs, with a few minor exceptions but nothing really memorable. It’s one of the more weaker looking shows by the veteran studio as the back drops and set pieces are a bit bland and lazy. The character animations and details are decent but nothing that will make you stop and appreciate what you’re watching.

The soundtrack of this series is the usual gothic style of music that characterises most supernatural themed anime. What’s really awkward are the opening and ending songs, which not only sound really annoying but they are awkwardly and creepily sexual in nature with the ending theme song titled as ‘Bow Down and Lick My Feet’ (Enough said). The English dub isn’t horrible but it sounds generically uninspired to say the least. 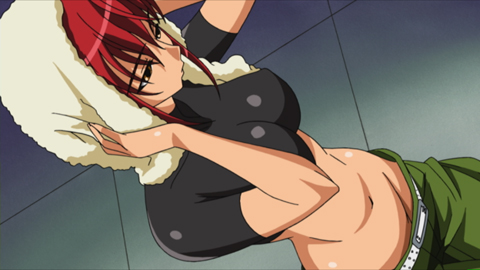 Princess Resurrection has a nice premise with some fun characters that get decent development, but the underlying plot and theme is rather inconsistent which results in an unsatisfying finale. It has its moments, but the main plot remains unresolved and the character relationships are not very interesting. It’s a fun and nicely paced show, but nothing that leaves a lasting impact when it’s all said and done.