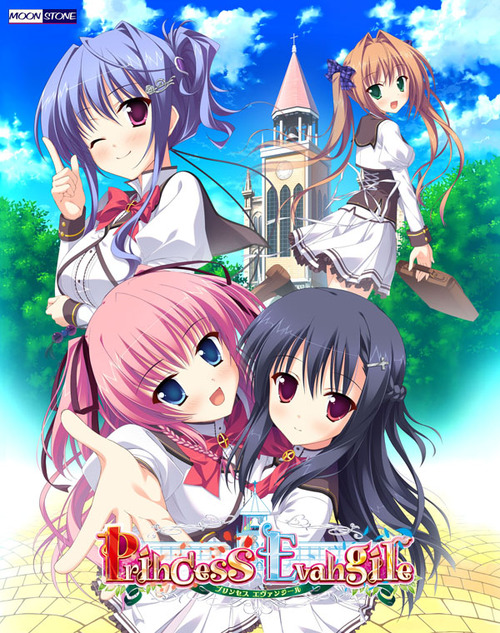 Overview
Taking a male student and dropping him into a previously all-female school is a very common occurrence in anime, manga, and of course visual novels. While anime and manga generally use this set-up to create a playground for misunderstandings and other types of humor, eroge tend to take things to a different level. That being said, Princess Evangile isn’t like your average eroge as it explores the various issues that would arise from trying to force a change on a school holding so tightly to its traditions that it may shut its doors. With a fairly familiar setting with a twist, is Princess Evangile worth your time?

Story
Okonogi Masaya has had a difficult life thanks to his father. At a young age his parents divorced and while his mother has settled into a new life, Masaya chose to stay with his father to try and take care of the old man who has always had an issue with money. Unfortunately for Masaya, his loyalty to his father pays off in a manner similar to a certain butler from a long running manga series. His father suddenly leaves Masaya without a cent to his name and with a huge amount of debt owed to a group of gangsters who want to force him into servitude to pay off his father’s debt. 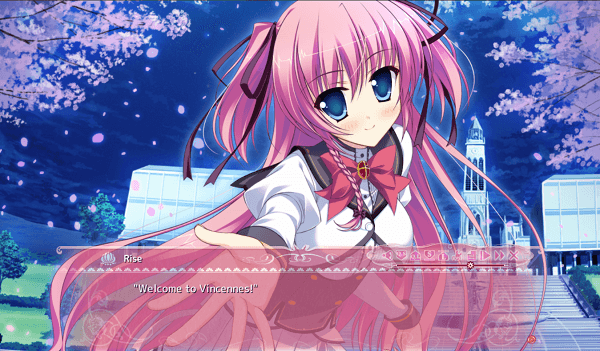 On the run from the mob, Masaya stumbles across a young woman named Rise in trouble and despite his own issues, he comes to her rescue. It turns out this is a rather fortuitous meeting for the young man as Rise is searching for a boy to attend the prestigious Vincennes Academy, a girls’ only school. You see, thanks to the long running tradition of only accepting female students, and generally only those from the upper-crust of society, the school is suffering from a low attendance rate and despite the wealthy students attending the school, is in imminent danger of closing down.

In an effort to try and save the school, Rousenin Rise, the head of the White Lily Society, has been searching for the perfect boy to serve as a sample to show that the school can successfully integrate boys into the student body without causing issue. Thanks to Vincennes Academy’s long reputation however, nearly every girl in the school has been sheltered since birth with most students graduating from basic courses, attending college there, and then obtaining jobs as members of the staff. Because of this tradition and sheltered state of the student body, practically everyone in the school is against the idea of integration. 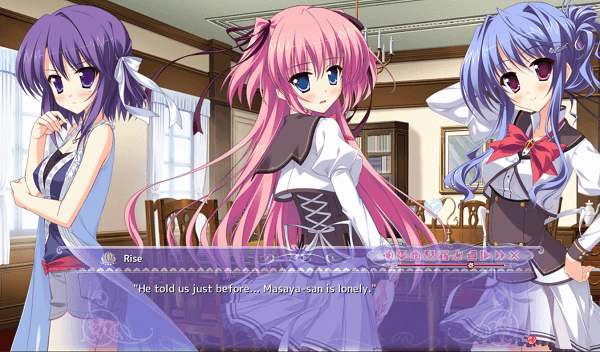 With only a year to try and sway the minds of the students, Rise brings Masaya into the school as a temporary student that has a year before a popular vote is held, either accepting integration and allowing him to keep attending the school or denying integration and forcing him from the school and away from any friends he may have made there. While it is an uphill battle against discrimination, fear, and those who are willing to use underhanded methods believing in their “righteousness”, Masaya isn’t alone as he soon finds that there are a few girls willing to help him out, including a childhood friend he hasn’t spoken to in over a year.

Throughout Princess Evangile’s very long “common route” players will experience a story that breaks the mold of the standard “low male population vs high female population” since most of the student body and especially the headmistress do not want him there. By focusing on Masaya having to deal with the aforementioned problems of the sheltered girls believing every lie they are fed about him, including giving him the title of ‘Tentateur Serpent’ due to misunderstandings, and the long held traditions of the school players will watch as Masaya and the rest of the White Lily society slowly begin to change the way the school thinks about him and the idea of integration. 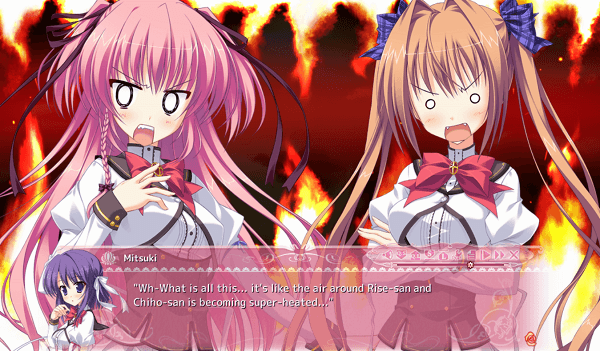 As mentioned Masaya and Rise aren’t alone in this endeavor as a number of girls come to their aid early in the story. In fact, one thing that surprised me about Princess Evangile is the amount of effort that the writers put into the supporting cast. Konomi, Ruriko, and Marika never are seen as more than side-characters despite how large of a role each of these three play in the storyline and how much they interact and seem to harbor some feelings for Masaya. While this is unfortunate as the addition of extra routes would have been beneficial, the concept of providing a well-developed cast of side characters is to be appreciated thanks to Princess Evangile’s length which is also supported by plenty of great comedic situations and the right amount of tension between the White Lily society and the school.

Princess Evangile runs twenty six chapters in length with the seventeenth chapter serving as the first branching path into one of the four character routes (since you almost have to purposefully aim to get a bad end) and it is here that the story branches in more ways than one. Over the course of the common route various hints about Masaya’s past involving Chiho and a traumatic fiery event from his past are mentioned but depending on whom the player chooses to pursue, this bit of backstory isn’t explored. 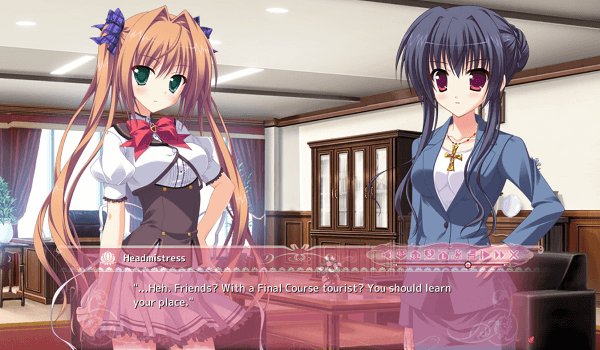 Along the same lines, the characters that do expand on Masaya’s past instead go a bit more into detail about the issues with the school and the Headmistress, meaning that there is actual story development involving harsh situations and disheartening situations that Masaya falls into as he deals with unique situations with each girl while also painting a clear picture as to why certain characters are acting the way they are despite not being explained in one route.

As for the actual girls themselves, the four love interests that Masaya can pursue start as fairly standard character tropes with Rise being the rich enthusiastic girl, Chiho as the childhood friend, Ritsuko as the quiet good girl, and Ayaka as the flirtatious rebel. Throughout the common route players are given glimpses at each character’s depth but only once they enter their specific route do these characters break out of their shells with each girl telling a story that will be hard to stop reading. 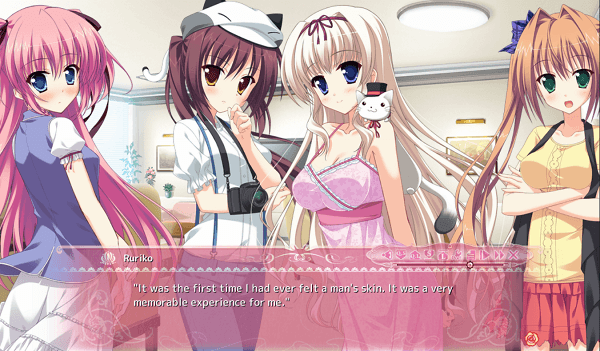 Now since this is the review for the 18+ version of Princess Evangile it is worth mentioning that H-Scenes only begin appearing once the player advances into a girl’s route. At this point the exclusively vanilla H-Scenes actually start to occur fairly frequently with the only major break being the advancement of that character’s personal story before closing out with one final scene. These H-Scenes may appear unnecessary for those who would prefer to simply enjoy the standard version of the game but the removal of these scenes, especially since certain ones take place after important events, would be a loss to the story.

Gameplay
Although the actual goal of trying to obtain the majority of the school’s vote to keep Masaya in Vincennes Academy is the setting for the story, there is very little that the player actually has to do here. Princess Evangile is a very standard visual novel in terms of actual gameplay as players simply need to make very simple decisions over the course of the story which do very little to actually affect the opinion of the student body as it is tied into the story.

As such most of the choices that players make up to a certain point will be easy to make and quite obvious but it is also entirely possible after a certain point to find yourself on a bad end, though as mentioned before it is quite clear when players should start selecting specific choices on what girl’s route they would like to go down since the only choices that appear once on a girl’s route simply unlock slightly different CG from H-Scenes. 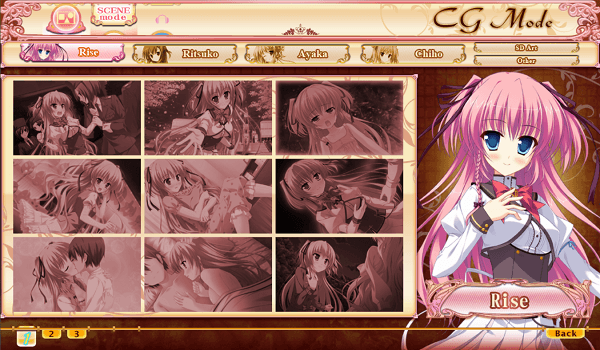 Something that is a bit unique about Princess Evangile is the way that various French terms and school specific terms are used throughout the dialogue. Most of the girls that the player comes across have a title, given to them by the rest of the students due to certain attributes, and each of these titles are presented in French. As such whenever a title or a specific term is used, players can click on that word for a short description which is fairly useful.

Another unique element found in Princess Evangile is the way that the focus will occasionally be taken away from Masaya and players will instead see the story told through another character’s eyes. These moments are represented by a blue dialogue window as opposed to the standard pink dialogue window and usually give player’s extra context into certain events. 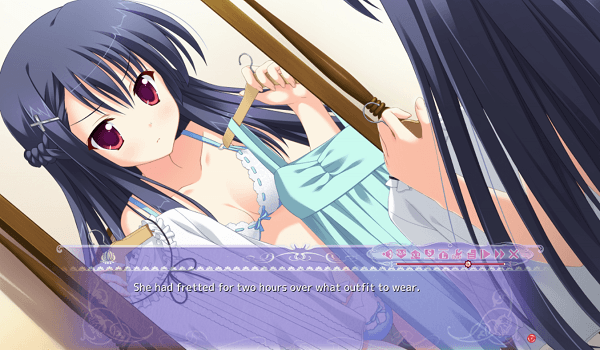 Like many visual novels, once players complete the story for the first time the Extras section appears on the main menu allowing players to revisit viewed CGs, replay H-Scenes, or listen to the game’s background music. Also like most other titles, players can opt to adjust the various audio levels of specific characters voices at will through the options menu.

Visuals & Audio
Princess Evangile’s style of art for their characters may not create the most memorable looking cast, since quite a few characters are fairly standard looking in this genre, but the characters still look quite remarkable and far better than your average eroge. There are enough variations of each sprite, including different outfits for certain occasions, to keep the presentation fresh feeling while also using plenty of SD artwork for comedic affect. 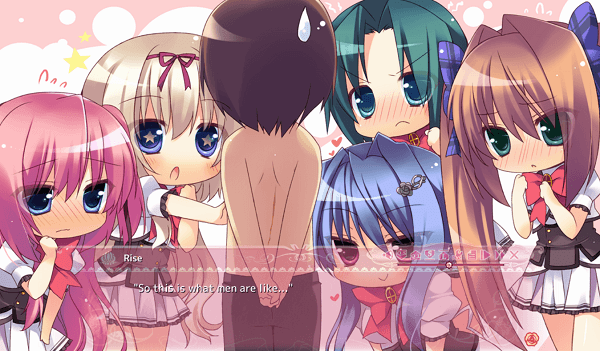 Since Princess Evangile takes place mostly in the prestigious Vincennes Academy which is partially a Catholic school most of the background scenery is fairly predictable due to the school setting but there is some nice attention to detail when it comes to giving the school a Western feel including a large church. As for the actual H-Scenes, these scenes are completely uncensored and each scene is split into two halves with numerous positions used throughout each scene. Outside of these moments the amount of actual fan service is very small and is limited to swimsuits and the occasional panty shot. 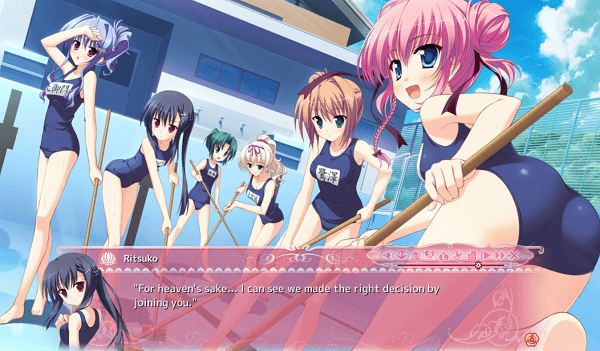 As with many eroge, the main character Masaya is not given a voiced role but unlike other titles, every other character is. This includes male characters that barely make an appearance as well as other side characters. As for the core voice cast, the female cast is voiced well enough with each character’s voice actress fitting the role of their character. The background music is simplistic but effective while the intro theme “Magic of Courage” is fitting but unremarkable.

Overall
Princess Evangile may be one of the pricier titles from MangaGamer’s library but there is good reason for this. Not only does Princess Evangile tell a story that spans well over forty hours but it is a story that is well worth sinking your time into. By delving deeper into the stereotypical setting of one boy in a school full of girls and exploring the many issues that this type of integration may cause, Princess Evangile finds a perfect balance between drama, comedy, and romance. With a great supporting cast and four well-thought out character routes to choose from, Princess Evangile is a fantastic title that offers far more than just H-Scenes, though those are quite nice.