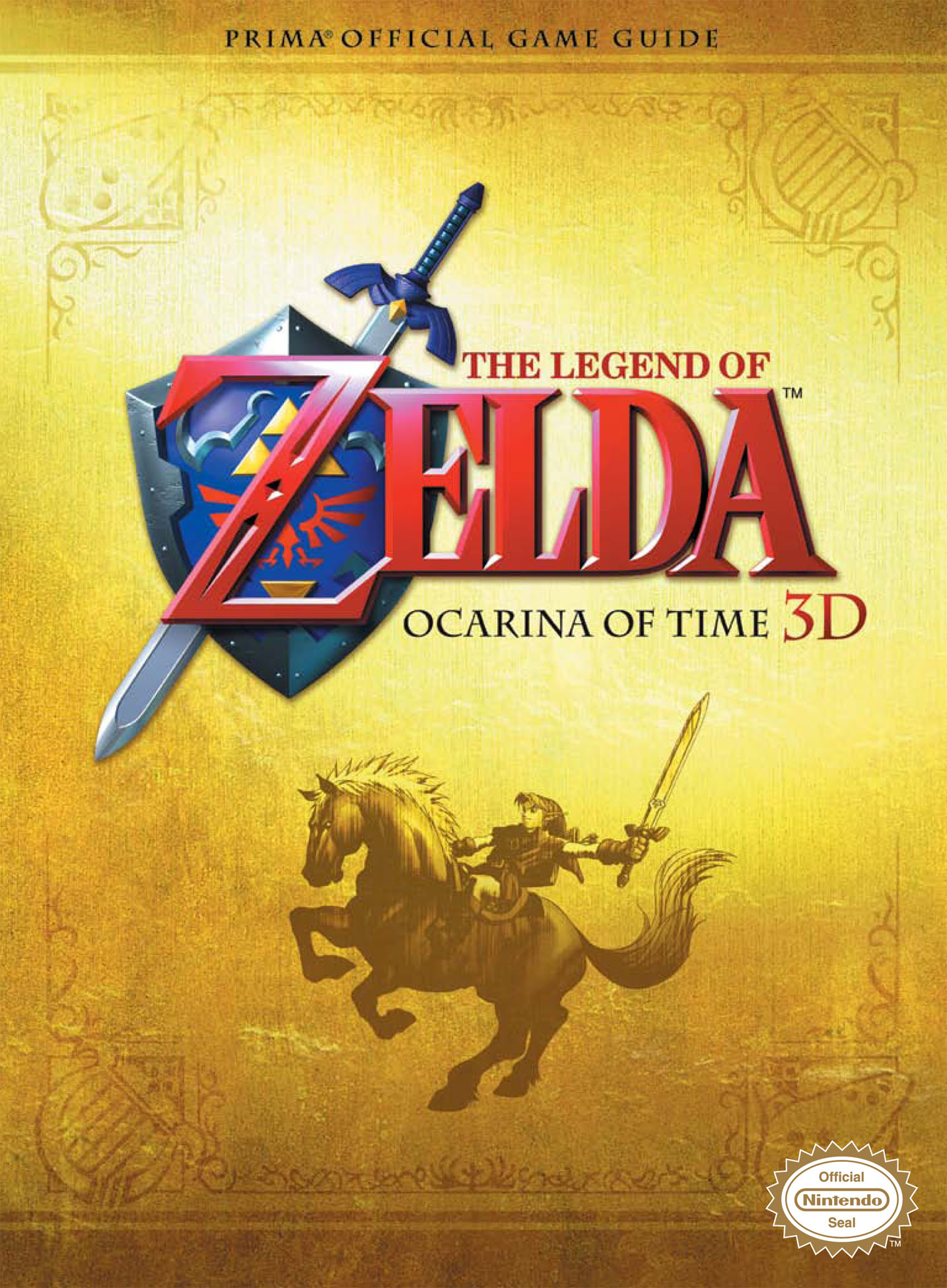 Prima Games The Legend of Zelda Ocarina of Time Guidebook

The Legend of Zelda Ocarina of Time is one of the most highly regarded games in video game history. It is also a game that is known to be confusing at times (Water Temple), so it’s a no-brainer that a guidebook may be required by some gamers who want to fully complete this game, or are just plain stuck. This is where Prima come into it.

Prima Games have released the The Legend Of Zelda Ocarina of Time 3D guidebook as a companion to the 3DS version of the game. The guidebook covers almost every aspect of the game, in a fashion that some would call ordered. It details the game through the course of Ocarina of Time and moves into Master Quest walkthrough afterwards. The guide is fairly comprehensive when it comes to the secrets and strategies, as well as optimal routes through dungeons. I did however notice that there was no mention of a secret image of Link that I found behind a few crates in the Gerudo valley. 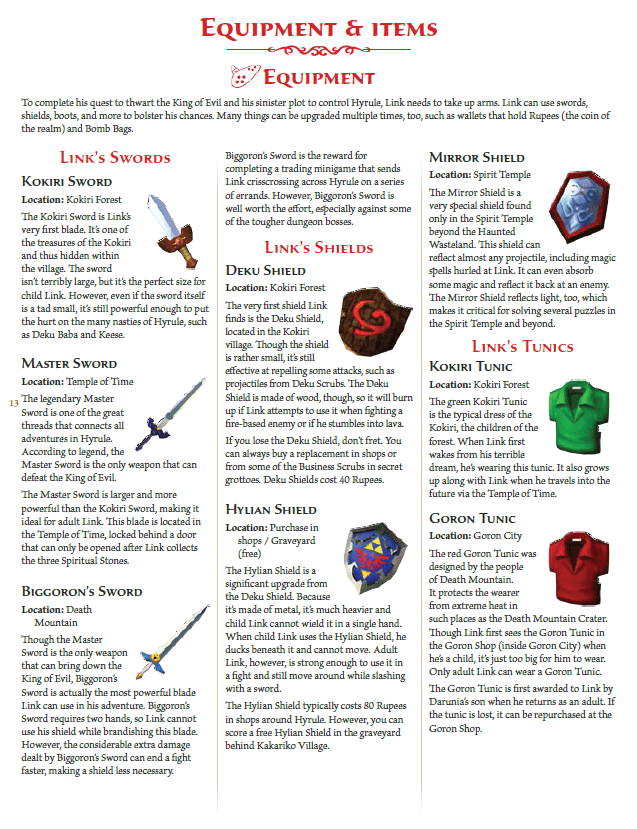 Most of the Guidebook is incredibly light on details, probably to avoid spoilers, but that can sometimes make it a little hard to discern the purpose of going to a particular location other than ‘you have to’. The book seems to be written with returning players in mind, with it being a little hard to understand and utilise for a newcomer coming into the game. Though, I did enjoy some of the survival tips the book offers “As Phantom Ganondorf flies between paintings, it releases a shock attack. To avoid it, back into a corner of the room. It will never touch you back here.” It’s something like this that I wouldn’t have thought about doing that can save you a few hearts in what is (potentially) a tough battle.

The book is full of screenshots that are of a pretty good quality. I wonder how they got these screenshots and I would like to have one of whatever device they used to capture the images. Speaking of quality, the cover of the book, I feel, would have benefited from being comprised of a harder material, as opposed to this cardboard like nonsense. It is incredibly odd that a game as big as Ocarina of Time didn’t actually have this feature. However, this could actually be a throwback to the original guidebook which was made of a similar material. The paper is standard glossy magazine-like paper which adds a nice texture to each page and makes the package seem a little more valuable. At the end of the guidebook, consumers will be pleased to find that there is a very nice poster awaiting them at the end. 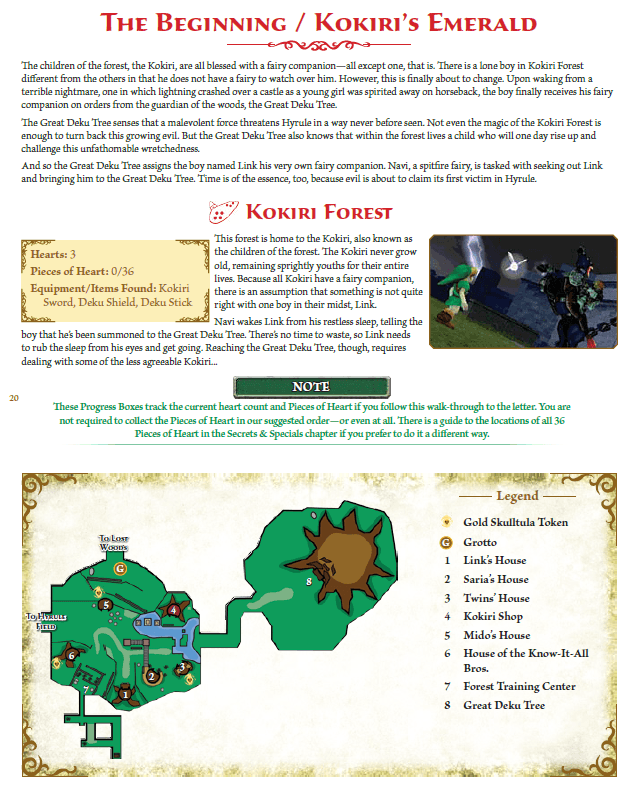 There’s a section in the guidebook that features a checklist of which Gold Skultullas you’ve found. The only problem is (if you value the quality of your book) you probably wont want to checking any of the boxes next to any of the Skultulla locations within the book.

The book is segregated into sections which clearly define and separate each section into its own content. The book moves from the Introduction to the great Deku Tree and then to everything else in a kind of order that works. Unfortunately, as I stated earlier, some sections of the book can be a little difficult to understand for newcomers to the series. I remember one of the other editors telling me of their woes in trying to understand what to do and where to go and how they couldn’t work out what the book meant. This problem is greatly noticeable at the section of the book that covers the Death Mountain Trail. It tells you to run up to Goron City, then go into Goron City and then to exit and throw the bomb flower at Dodongo’s Cavern. This is completely weird as it leaves players that are closely following the guide confused. If I were to do a literal run of the game from page to page of the guidebook, I would simply not be able to progress past this point. 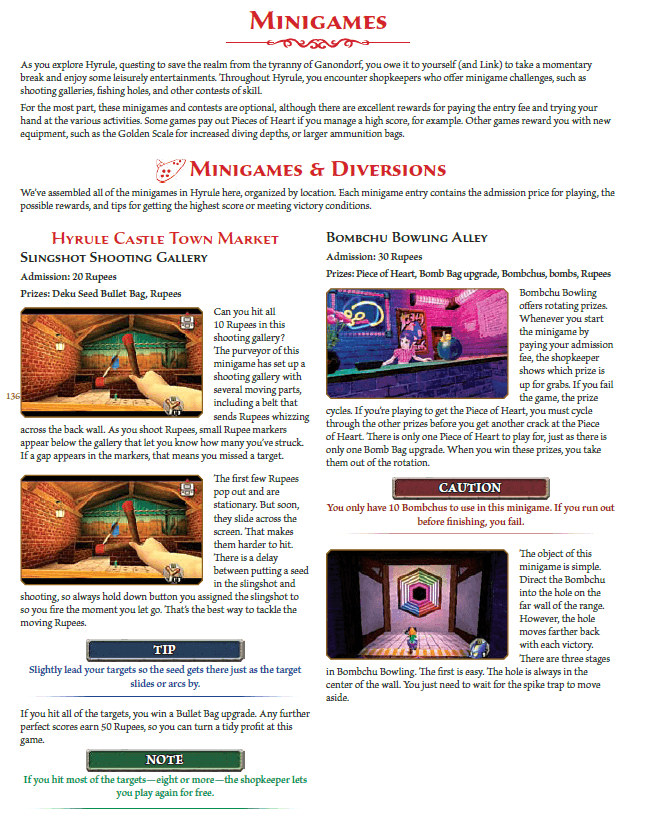 The book is adorned with nice illustrations that decorate the page, like the Heart Containers atop the page that fill as you progress through the book, there is what I believe to be the Harp of Ages on the bottom left corner of the left hand page and the Ocarina of Time on the top right of the right hand page. It’s the little things like these that help to bring life into the book and put it into its own. I found that these, in combination with the other decorative imagery, made the book feel particularly Zelda and that is always a good thing.

Overall the Prima Games guidebook to The Legend of Zelda Ocarina of Time 3D for the Nintendo 3DS is a solid package for all players who either require guidance or love to collect memorabilia based on the franchises that they love. The book is presented in a passable manner, with highly decorated pages within. While the book can be a little confusing in some parts, it is mostly coherent and as spoiler free as possible. If you still have a surviving copy of your original Ocarina of Time guidebook, I’d still say to pick this copy up, if only for collectable purposes.The official Nintendo Seal adorns the edge of the cover of this book, which is an indicator of the quality of the comments that reside within.