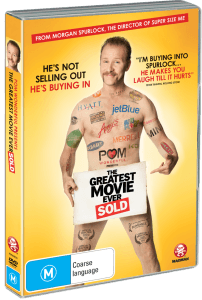 With a cover like this, Morgan Spurlock, naked and literally branded with a range of different companies, there is a definite intrigue from the get go. The Greatest Movie Ever Sold is based around the advertising industry, the ins and outs of pitches and how branding all works. Morgan Spurlock has a whole bunch of documentaries under his belt, with his most popular and controversial being Super Size Me, so does this film measure up to that doc-buster (documentary blockbuster)?

At first, the movie sounds like the easiest film to make, after all don’t brands spend a lot of money trying to get product placement into film and TV shows? That was what Spurlock first thought too, but the journey of the film is a lot more than that. It starts off with Spurlock pitching his idea to advertising companies to try and get their brand contacts, and getting knocked back by every company except one, because the film just doesn’t seem marketable. I bet they feel silly now. 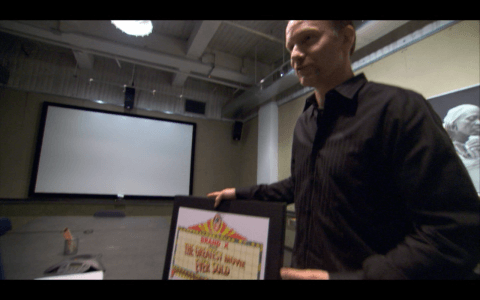 Then he starts to pitch to the brands by cold calling them and starts getting knocked back again and again, with over 650 cold calls. As someone who briefly worked in the cold call industry, I can attest to the fact that this is not fun. However, Spurlock sticks with it, doesn’t let all the ‘no’s get to him, and eventually he whittles it down to fifteen interested brands.

He invites the audience to sit in on the pitch meetings he has with the advertisers, including him pitching one of the three in-movie advertisements to Pom Wonderful. This scene in particular showed that, even though the company was portrayed pretty positively throughout, the company is the one to decide exactly what the advertisement will be, and the complete control that companies have in terms of how they are portrayed in either advertisements or product placement. In the end, Spurlock just seems to be the guy who shoots the ad. 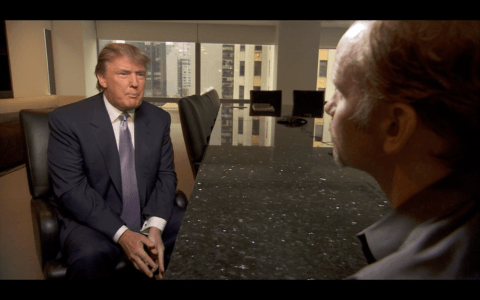 Whether or not he is selling out is something that he also goes into in the movie. Putting the question to his viewers, random people on the street, and advertising experts. The question remains open in the end, allowing the viewer to decide what they think is true and to draw their own conclusions. The fact that it allows you to decide steers it away from the irony that a documentary that encourages you to think for yourself then makes your own thought path for you. 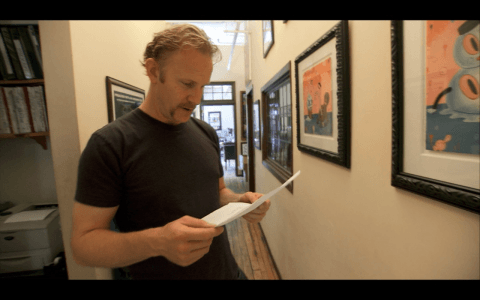 The film also goes into the transformation that São Paulo went after passing the ‘Clean City’ law that removed all outdoor advertisements. Before the law São Paulo was notorious for the amount of outdoor ads, and Spurlock explores the effect that the ban has had on the city. And it is, largely, positive. In fact, the only negative effect is that companies have to evolve their way of selling products. This is probably the most serious part of the documentary, with the least tongue in cheek, simply because there is no need for it, the message behind the documentary is right there. 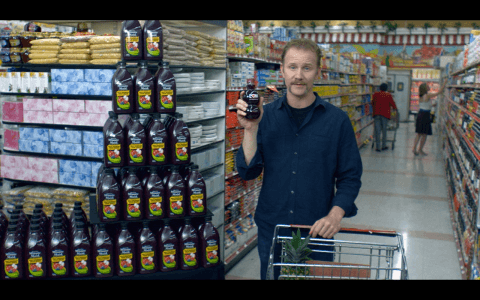 At the heart of the movie is an investigation into the advertising industry, and the effect that advertising has on society as a whole. While the pitches and journey of making the movie via sponsors is a huge part of it, the reason that Spurlock doesn’t appear to be a sell out is in the way he presents himself. He treads the fine line of marketing a product and having that inner lining of irony. You are always quite aware that the reason he is pushing these brands is for the film itself, and the idea that this is all to make a bit of a joke of the advertising industry and the brands. However, this doesn’t mean that the brands included are made fun of per se, instead they are ‘in on the joke’ and it sort of makes their image be a bit more fun. Personally, it does change my view of the brands and I found myself craving some Pom Wonderful after finishing the movie. 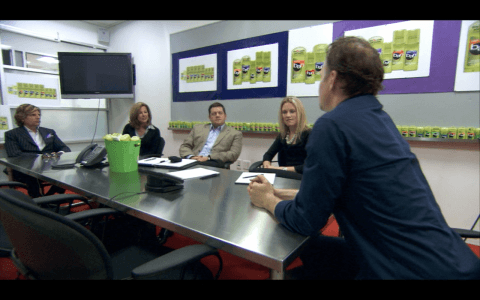 Graphically, Greatest Movie Ever Sold isn’t something to write home about. It is a step above other documentaries visually, and in one particular scene Spurlock utilises a series of simple graphics to prove a point and bring some humour into what could have been a dry conversation. Quite a few times Spurlock finds easy, subtle ways to make the audience laugh, which is something that you won’t often encounter in a documentary. 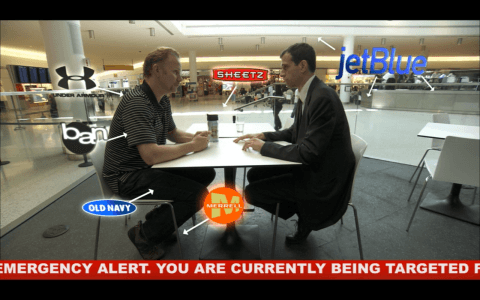 The three advertisements that he inserts in the movie all have a clearly well polished look that differentiates them from the rest of the movie and lets the audience know that this is one of the ads that he mentioned would be inserted into the movie earlier on.

Spurlock narrates the documentary and his voice is just about enough to bring the movie to life, especially given the fact that documentaries aren’t really that big of a music-centered media anyway. The only obvious part of music in the movie is the song written by Ok Go specifically for the movie that they called ‘The Greatest Song I Ever Heard’.

Pom Wonderful: The Greatest Movie Ever Sold has a fantastic pacing, with an intriguing concept behind it and a great director at the helm. Morgan Spurlock has the ability to hone down an already interesting concept, and present it in a funny, thoughtful way that can inspire discussion and a new outlook on a well-known topic.

Even if you aren’t the type who likes documentaries, chances are you’ll like this. It doesn’t feel like the typical definition of a documentary, thanks to Spurlock. This is a definite must see.