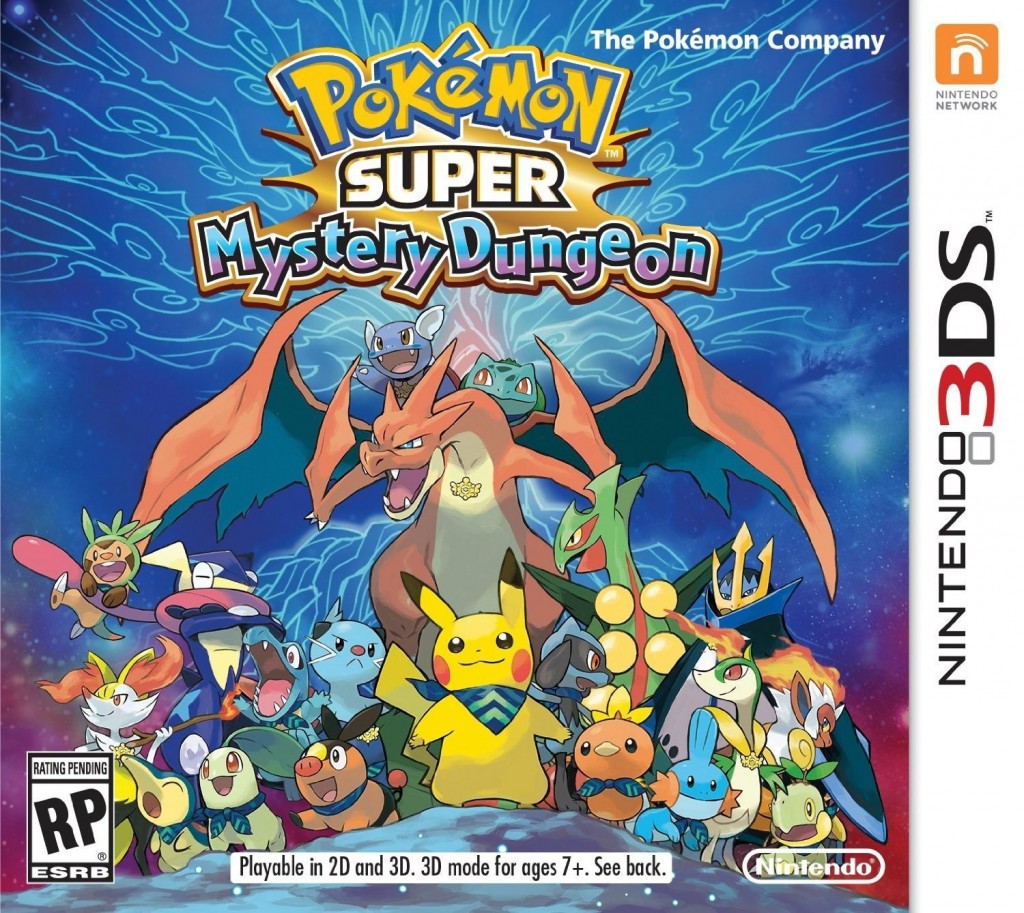 Overview
Over the years, Pokemon Mystery Dungeon has evolved from what could have easily been a one-off Pokemon title to an entire series that has its own loyal following. Those who crave rogue-likes and dungeon exploring can definitely get their fix here, and since the series has moved to the 3DS, we have also seen a large improvement in the way of storytelling. Pokemon Super Mystery Dungeon allows players to do more and see more Pokemon than ever before, featuring 720 Pokemon on the roster as well as a lot of new narrative to sink into. How does it fare? Lets find out! 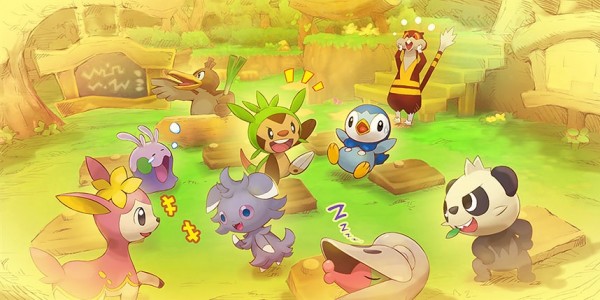 Story
For the Pokemon Mystery Dungeon series, the narrative has usually remained close to the same for the overall experience. The player mysteriously wakes up as a Pokemon and quickly gets thrown into a new world with talkative friends who are Pokemon that live in their own little world. This time around, a Nuzleaf finds the player (who will become one of the entire roster of starters or mascot Pokes) and brings them back to a small town, quickly trying to enroll them into a school for Pokemon. It sounds silly enough, but there is another plot involving legendary Pokemon coming to Earth, as well as other Pokemon mysteriously turning to stone. At first, you will be doing very innocent little rescues that are mainly used to flesh out the characters within the game. As you progress however, the large and meaty plotline begins to unfold, tying everything together perfectly for what in my opinion is the strongest this story has ever been. 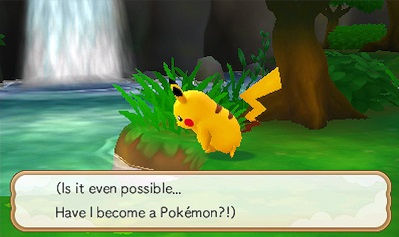 Its not just about the story – even though that alone is fantastic. The writing is marvelous in Super Mystery Dungeon. Every Pokemon has their own little personality, with some even having accents as well as other little quirks that really bring out the charm to the roster within, making every interaction memorable. I still remember the Pokemon from the start, middle, and end of the game due to their little quirks, like how Pancham and Shelmet are brainless bullies, and Deerling has had it up to “HERE” with their antics. There are so many Pokemon that just keep coming that you would think it would be hard to keep up, but this title has a way of making them all fit despite having an average sized home base. The themes are also important as Gates to Infinity definitely brought out more mature dialogue with its stories of death and growth, and this title takes that writing and twists it a bit – delivering excellent lessons within the narrative that make it feel as if the player is watching a great Saturday morning cartoon. I am sure this entry could have gotten away with being shallow in terms of story as the gameplay does a lot, but it really shows how much value this title has once you are thinking more about what is next in terms of cutscenes than the Pokemon infested dungeons that lie ahead.

Gameplay
Dungeons. Yes, there will be dungeons. The core gameplay has not changed much – and still works better than ever with the player having to go into dungeons and find the next staircase to move to the next floor – usually with a friend attached. If you are playing a story mission, the game will select your team for you. If you are doing a standard dungeon, you can recruit any Pokemon in the roster. Yes, all 720 can eventually be recruited- but do keep in mind that takes a bit of time to unlock. Like other Mystery Dungeon titles, the player moves one square at a time at a speed of their choosing, but they also must keep in mind to choose their direction carefully as enemies also move at your pace, meaning you will definitely run into some foes based on the path you take. By holding down the shoulder button, the player can choose from one of four moves on the fly, launching an attack that works by type and distance. For instance, a razor leaf can hit a straight forward target from a few spaces away, while something like tackle requires close combat. Your team also attack when you do, with AI that is allowed to be altered to best fit the players own liking. 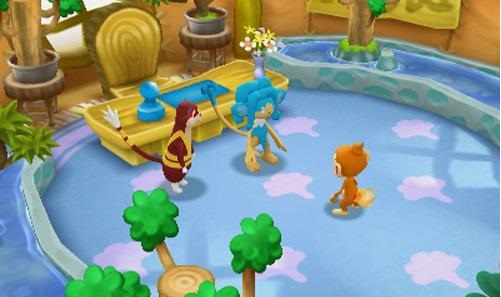 Items are a big deal as well – as managing the stuff you find plays a large role in survival. Apples and other food items fix your hunger stat, which drains based off of every step you make. Once the hunger is depleted, your HP will follow unless you use a healing item such as a berry. Other items boost PP and other stats, ensuring you can continue to use those effective move while also keeping the main strategic elements in check by not keeping a heavy load of those items in the dungeons themselves. Blocks can be found on the floor to eliminate status effects that the enemy has bestowed on your team, so finding these before heading into a new area is usually a good idea even though most status effects disappear on the next floor.

It wouldn’t be a new entry without something new to hang onto as well. Players can now take advantage of “Looplets”, which act as a belt or an accessory of sorts that can hold gems known as “emeras”. Each emera you find has a special power that can boost a stat, or even cause Mega Evolution later in the game. The drawback of these little items is that they are timed upon finding and if you are pacing the floors you will more than likely see one shatter in front of you and be forced to gather up the remains in order to get a power. Its a nice little addition that definitely encourages exploration, as later in the game the difficulty ramps up and these Looplets are nearly a requirement to ensure the player will make it out in one piece. Yeah, this is still Pokemon and isn’t punishing on many fronts, but I definitely was surprised with the challenged this title had compared to the more lax difficulty of Gates to Infinity. 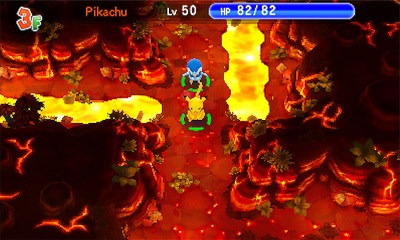 If the player fails a dungeon, they can call for help from other players with passwords, QR codes, and so on – keeping that natural communication with other players in tact that had me running to forums over ten years ago in Blue Rescue Team everytime my beloved Pokemon fell. The main town is also a joy to explore and even though it takes a long time to get away from the story – one could easily sink in at least sixty to seventy hours in this experience due to the very high amount of replay value. Yes, this is still a Pokemon game at heart and it beats boldly with everything that the fans could ask for.

Visuals
Pokemon Super Mystery Dungeon is a weird title to me, but I will say that however misplaced those words are, there is still a stunning game underneath. The 3D models look exceptional as Nintendo are not trying to shove the 3D elements down our throat – but instead polishing every color and environment in order to make some great eye candy for the player to feast on. I will say it again that this title really has the look and the feel of a cartoon that you would wake up and watch as a kid, and with the chipper and emotive pictures and animations, its very easy to immerse yourself into this wonderful spin-off. 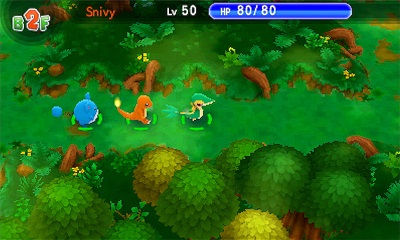 Audio
The music is also exceptional. Every track is just happiness in a bottle, ready to break and spread joy to all those that hear it. I don’t want it to sound like the game is overly cheesey, but the music is so chipper that is makes the player feel good and upbeat despite the fact that more serious situations are featured, in turn letting the light-hearted atmosphere take hold. The Pokemon don’t have voices or cries but the written dialogue is much preferred, and most will not even think about those classic cries once they dive into all of the many characters’ personalities.

Overall
Pokemon Super Mystery Dungeon is a shining gem on the 3DS that honestly took me by surprise. I usually enjoy this line of games to start with, but this entry seemed to go above and beyond – setting a new mark with its excellent narrative, sharp writing, and solid gameplay. It isn’t often when a spin-off can stand right beside its originator on its own two feet, but Super Mystery Dungeon does just that, stepping out of the shadow of the much loved RPG franchise and into the limelight where it finally feels like the series has come full circle with its own identity. Those who love Pokemon and are looking for a lot of gameplay in a fresh and imaginative world, look no further as Pokemon Super Mystery Dungeon may just be one of the finest Pokemon titles to ever hit a handheld.