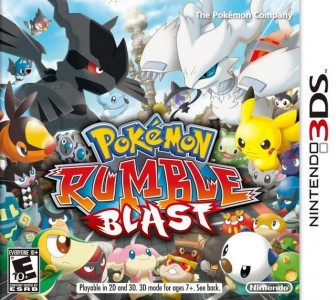 Many have been long awaiting the debut of a Pokemon title on the 3DS. Why shouldn’t they be though? The series has dominated Nintendo’s handhelds for generations now and is one of the highest selling franchises of all time. Pokemon Rumble Blast is the first Pokemon title to appear on the new 3D platform, and while it is a spin-off, many of the hardcore fans are sure to snag this title up based on name alone. Pokemon Rumble certainly turned some heads a couple of years ago when it appeared on the WiiWare, but the main question is if that same formula can be executed on a portable platform. What is the final result of Pikachu and friends’ first trip into 3D? Here is my review for Pokemon Rumble Blast for the Nintendo 3DS. 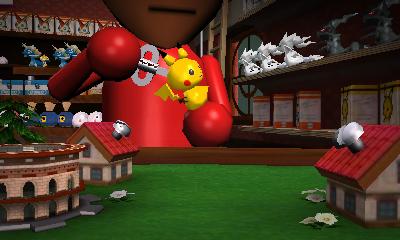 Story:
In Rumble Blast, players take control of nearly the entire roster of Pokemon, but with the creatures themselves now being made out of wind-up toys. Much like the main series, this title thrives on the same idea of “catching them all”, but instead of doing battles in gyms and going through any substantial story, you must take your team of toys throughout various locations and defeat several enemies before tackling one large boss at the end of a stage. If you are looking for a plot that mirrors that of the main line of Pokemon games however, you might be a bit disappointed in the light narrative within this toy-ridden romp as there isn’t much depth to the story told.

The main story revolves around special fountains that are filled with a rejuvenating element known as “glowdrops”. Due to the rare and powerful nature of this special liquid, many evil Pokemon have been draining these fountains and it is up to you to seek out and defeat the culprits with your team of obtained toys. This of course is happening in a “Toy World” where Pokemon are constantly battling to become the Battle Champion, so both tasks run in unison throughout most of the game. While the plot does assist in giving a sense of progression, the game never allows you to get to know any of the monsters you work so hard to catch. You see, each time you defeat a Pokemon and they join your roster, an unchangeable power stat is already pre-assigned and that particular toy cannot be leveled up. This means that the player has to constantly replace and throw away obsolete party members if they want to progress. While this does make the gameplay more strategic to a degree, it sadly prevents the player from forming any sort of attachment to their team. Some may be able to easily overlook this problem, but I personally couldn’t as nearly every Pokemon title of the past (spin-off or not) has always let the player develop somewhat of a bond with their trusted creature(s). That element is why I think the series is so endearing to start with and without a steady and familiar group of heroes, the story suffers to a great degree due to the lack of any character growth.

This may sound grim to those who are looking for a famous Pokemon filled experience, I can say that there is some personality to be found in this toy-filled world though. Many towns possess quirky NPC Pokemon who all have been given some light dialogue that can make each chapter feel distinct. The main questline feels random and a bit hollow, but there is a still a small redeeming factor in the sheer variety of creatures that can be found roaming about Toy Town and the many other locations in the game, who are all ready to share some insight, tips, or secrets at a moments notice. Even though this interaction was minor, I feel if the same attention was given to the player’s team, the story would have been much easier to follow and more enjoyable overall. 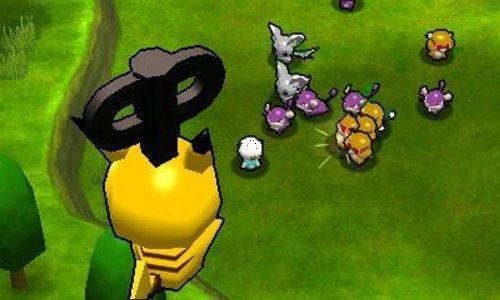 Gameplay:
As I mentioned, Pokemon Rumble Blast consists of the player controlling a toy Pokemon. The heart of the game feels that of a dungeon crawler, as the main objective is simply to fight to the end of each area and keep progressing until one big boss in encountered at the end of a level. Like the main series, each one of these wind-ups have their own move-set, stats, and power level, and all of which must be properly utilized to take on any of the foes ahead successfully. Since each toy cannot be leveled, the player must constantly rely on obtaining coins that are dropped by all opponents they defeat as this currency is used to purchase new moves. It’s a solid system, though Rumble Blast never tries to innovate in it’s mechanics as players progress, which can lead to everything feeling rather bland and repetitive after just a short time.

Rumble Blast is split up into chapters, and each chapter is made up out of a few separate locations that players can explore to find new dungeons. “Explore” may be a bit too strong of a word though, as these areas are found right beside eachother and aside from one or two roaming opponents, there isn’t a lot to see in any of the overworld as a whole. Each dungeon has a set number of Poke-Toys that can be obtained, and every one of these Pokemon have a unique move-set and power level that is based on how far you may be in the game.