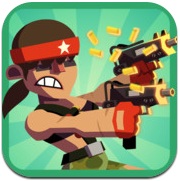 Mobile gaming powerhouse Chillingo is back with a new entry invading the iOS App Store. Is this portable side-scrolling shooter worth the price of entry, or should we tell it we’re going to kill it last (but then kill it earlier, telling it we lied when we said we’d kill it last)? 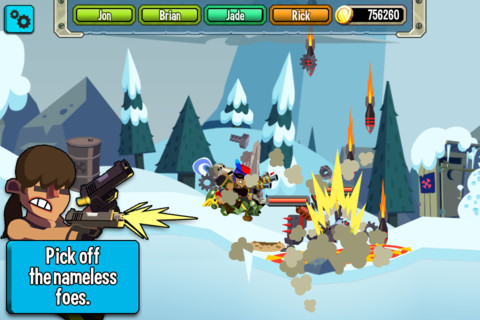 Oh no! Strangely dressed, evil men have arrived and they’re doing things only imaginable in the darkest of horror films: parking in handicapped spaces and stealing candy from babies. Who they are, why they are so evil, or whether they are motivated purely by their bad upbringings or in service of some more nefarious cause is never broached. And in this kind of game that’s fairly appropriate.

At least it’s not the Nazis again.

Regardless, it’s up to your squad of battle-hardened men and women to dismantle this great evil with the greatest wartime strategy every devised: beat them down with tree branches. That and your squad isn’t that battle-hardened. Actually, they start off wearing what is commonly known as casual summer clothing. It’s once you start earning some in-game cash that you’ll be able to turn those poor bastards into inglorious ones.

To go about getting some gold you can always dash out some real money and micro-transaction your way through the game’s various armour sets and weapons. Or you could actually play the game, and it  is quite easy to pick up and play for five minutes. Essentially you need to move your men from the left side of the screen to the right until you reach the end point of the level. On the way, you’ll bash your way past various enemies who are out to nefariously finish off any plans you might have of freeing the denizens of Earth from them. 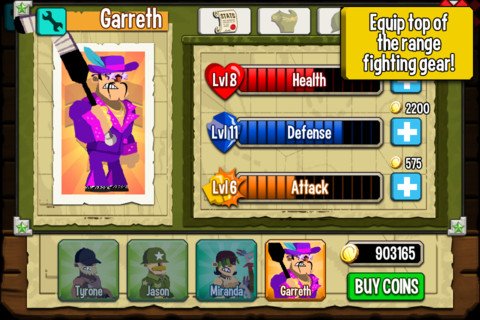 In basic terms, the controls are intuitive. Tap where you want to move, tap the enemies you want to attack, and swipe down to duck and avoid incoming fire. The fact that the controls are this simple would have been amazing were their responsiveness not so shoddy. If the game picked up that I was even tapping or swiping the screen at all, it often misinterpreted what I was telling it to do. Swipes made my commando attack instead of duck, and taps by enemies were seen as move commands rather than an attack. Sure, there was always the odd power-up to bail you out (activated by tapping a button in the bottom-left corner of the screen), but I couldn’t help but think that the game would have been better off using tilt for movement and taps and swipes for attacking and dodging. Platoonz‘s confusion at various inputs is probably due to the fact that every action you undertake in the game involves tapping or swiping the screen, and it’s just too much. 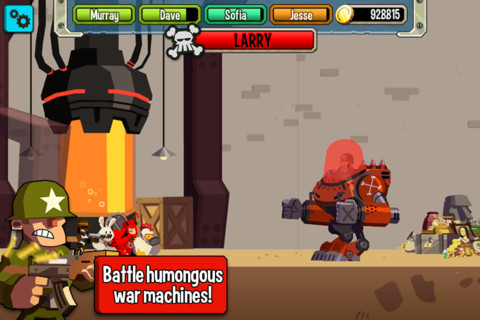 Control issues aside, the game doesn’t particularly engender long play sessions either, as it’s quite repetitive. What it  does do well is not take itself seriously. Between laser guns and wacky costumes, Platoonz manages to add a fun vibe to what is otherwise an unexciting formula.

Visually, the game’s cartoon style is underwhelming. Where several iOS games have stopped with the cookie cutter two-dimensional cartoon style and dropped it for a more elaborate, “this could be a cartoon on TV”  approach, Platoonz unfortunately sticks to the status quo. Despite a variety of environments, none of them pop out as being particularly interesting or beautiful. 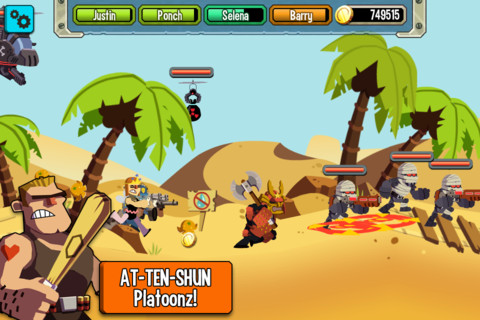 The game’s sound design fares a little better in the sense that it is not entirely forgettable. The musical themes are packed with gusto, perhaps a bit too much so, and the effects are serviceable, if a bit corny. Unfortunately, if you’re without headphones in a public place the game ignores your device being on silent. It’s trivial, but also annoying.

Platoonz is a game that is limited by its lack of originality and a makeshift control scheme that is, in basic terms, broken but still functional. The game’s stylistic charm is diluted through its less than impressive visuals, and though you may find some enjoyment going through the levels due to the robust character progression system, you’ll be frustrated and bored far more often than you’ll be entertained.

In the end, I have to consider the value of Platoonz in comparison to its $0.99 price tag, and to be honest, it’s not worth it. Had it been free, with perhaps a larger emphasis on microtransactions, it would definitely be one to check out, but as it stands Platoonz is a game that is far to happy to stick to the basics, and yet it doesn’t even do those well.