Plants vs Zombies is one of the most beloved franchises in all of mobile gaming. It was able to redefine the tower defense genre, and was even able to transcend the mobile platform and can nowdays be found on just about anything that plays video games (heck, even Facebook has its own version). Plants vs Zombies 2 takes the ball from its predecessor and runs with it in a big way. More levels, better visuals and a few new interesting mechanics makes for a game that is a blast to play. 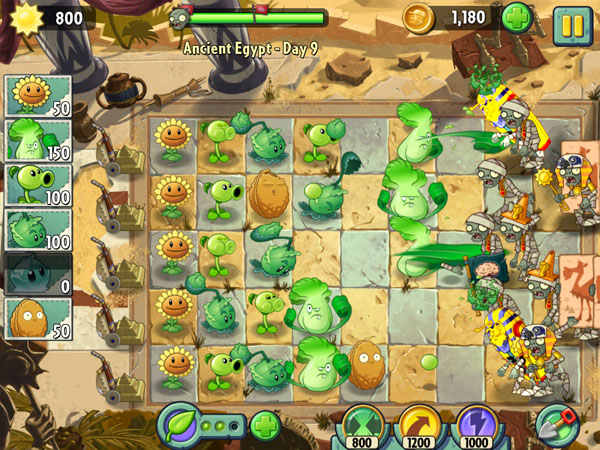 The story of Plants vs Zombies 2 revolves around ‘Crazy Dave.’ Crazy Dave has returned from the original and he has brought a whole world of crazy with him. After the game runs you through its brief tutorial, Crazy Dave eats a taco so delicious that he wishes he was eating it again right now. To that end he introduces his time machine and the race is off! The time machine however sends you and Dave too far into the past, and you have to battle your zombie hordes to get back to Dave’s taco.

The story and the dialogue are a lot of fun, and filled with the same puns and nonsensical humor that you would expect from this game. All in all it makes the package of Plants vs Zombies 2 feel more complete than its predecessor. 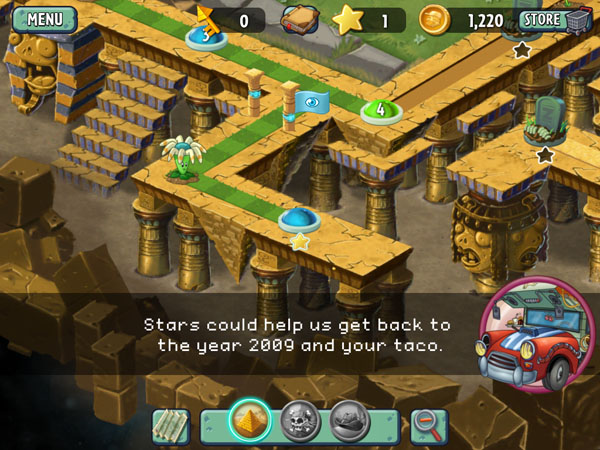 The gameplay of Plants vs Zombies 2 retains a lot from the original. You place plants in your lawn (or a few other areas) to defend yourself from the oncoming zombie hordes. Each plant has a different ability; some allow you to gather energy in order to grow more plants, some offer walls, and others fire projectiles against the undead monsters.

The game includes all of the game modes that you love from the original. The standard “gain sunlight energy and plant plants,” is of course the game’s go-to, but the even more frantic “we will keep giving you free plants while zombies come at you” is also present. The former is fun and lets you plan strategically how you will position your plants for maximum zombie carnage. The latter is a frenzied race where you just slap down as many plants as you can and hope for the best. 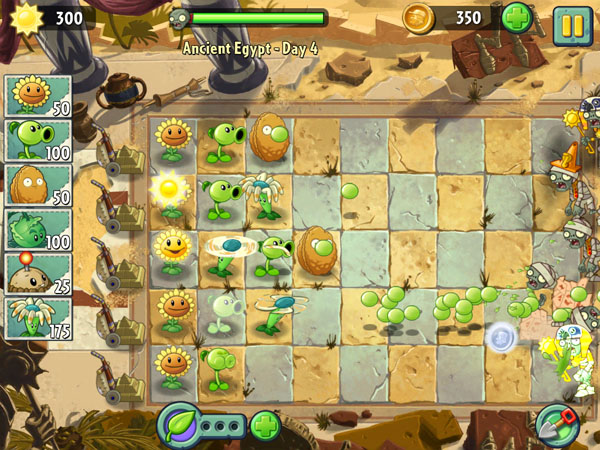 One of the new features in this game is the addition of “Plant Food.” Plant food is an item that gives one of your plants a temporary boost. Drag plant food onto your regular pea-shooting plant and it turns into an absolute plant of war – firing off a barrage of about 40 pellets in less than five seconds. You also have power-ups that are overpowered little boosts you can use, such as the Power Zap which obliterates all zombies in a straight line.

The Double edged sword of Plants vs Zombies is its free-to-play status. The game is completely free, and that is always awesome, but EA makes its money back through microtransactions. Some plants are unavailable to players unless they pay some real-world dollars to unlock them. One of these plants is the Snow Pea from the original (the one that freezes zombies while dealing damage). This fan-favourite plant, as well as a few others cost $2.99 each.

(little side-note; when I first loaded up the game, it was asking for an incredible $10.49 for each plant… it definitely was a “woah, no way!” moment… Luckily that was a bit of a glitch and the problem since rectified itself) 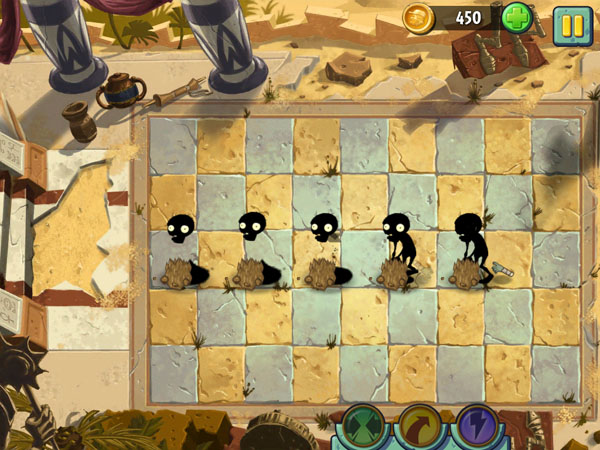 There is also the mobile-standard “3 star” system present in Plants vs Zombies 2. Unlike in most games where the stars are just for bragging rights, in PvZ2 they serve a purpose. You are required to collect a certain amount of stars in order to progress through the game and unlock more levels. Should you be a little impatient, or just not great at the game, you can purchase stars with real-world money. While you have the option purchase these stars and plants, you are by no means forced to and the game doesn’t have that “play to win” feel.

The gameplay is all solid and the controls are incredibly responsive, never requiring you to mash on the screen or fail a mission due to input lag. All in all the game runs even better than you would expect, and really shows the Tower Defense genre what it is like to be king. 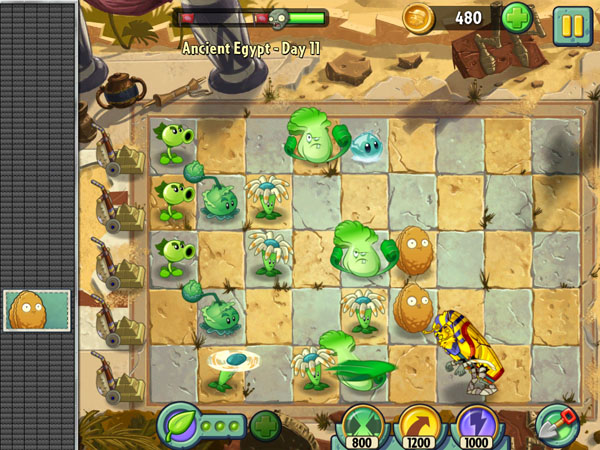 The visuals in Plants vs Zombies 2 look absolutely amazing. They retain the same art style from the original game, and has improved on it with slick HD visuals and the change in backdrops between worlds really adds life to the game, so you can’t stuck looking at the same thing every level.

Currently there are three available worlds; Ancient Egypt, Pirate Seas and Wild West (with a fourth world coming soon). Each has separate themes and are completely distinguishable from the last. Aside from just the locals, the different worlds even bring their own unique zombies. Ancient Egypt features a Sarcophagus-carrying zombie, while the Pirate Seas world has Captain Zombies, and zombies with the Jolly Rodger emblazoned upon their traffic cone helmets.

The distinguishing visual styles of each world helps to break up the game so that you aren’t reliving the same thing over and over again. Repetitiveness was a problem that I personally had with the original, and something simple as the visual changes go a long way to break that up. 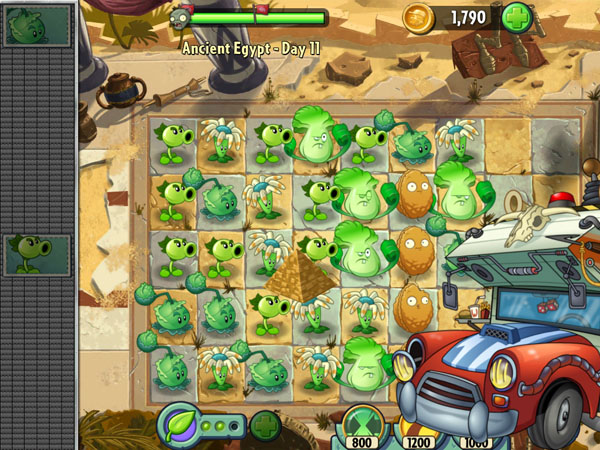 For the most part the audio in Plants vs Zombies 2 is unchanged from the original. I for one find this to be a boon, as the audio in Plants vs Zombies was one of its most charming features. Everything makes its own unique sound, and while you are frantically tapping the screen to place your plants, the sound of a zombie munching on your Wall-nut is unmistakable and immediately draws your attention. 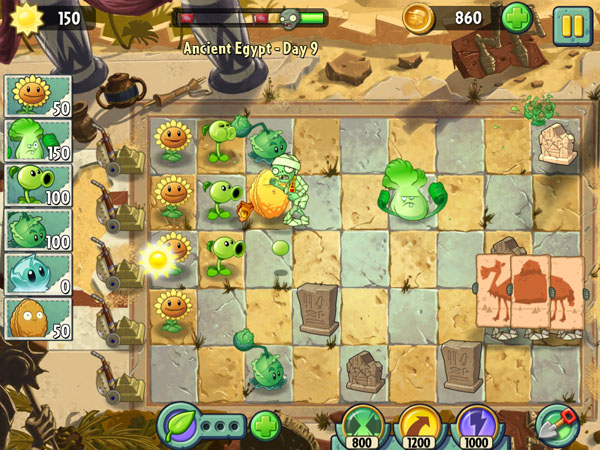 Plants vs Zombies 2 is what a sequel should be; a game that takes everything that was great from the original and improves on it. The free to play structure often leads games to being either poorly made or rely too heavily on microtransactions, but PvZ2 is a superbly made game with none of these faults. Sure the microtransactions are there, but they aren’t necessary to get the full enjoyment out of the game. The stunning cartoon visuals, charming comedic story and variety of locales all add to the Plants vs Zombies experience. Not only is this a game that PvZ fans should download, but it is a game that anyone with a smartphone needs to download.