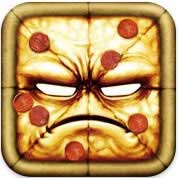 Pizza Vs. Skeletons is a hard game to review. Not because there’s anything wrong with the game; in fact, it’s the first iOS game of 2012 to truly enrapture me. But there’s just so much in there.

The amount of content and variety packed into Pizza Vs. Skeletons puts some full retail games to shame, and the quality remains high throughout,making this a must buy for anyone who loves portable gaming. 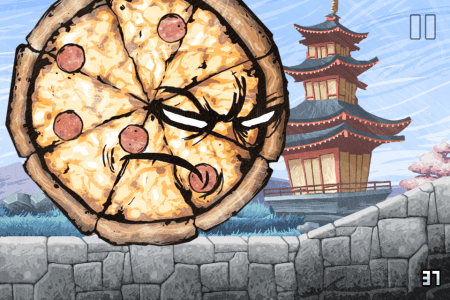 Pizza Vs. Skeletons features one hundred levels of a giant pizza confronting the undead. This confrontation always involves using tilt as the main means of navigation for the gargantuan, rolling Italian dish, but the controls are just about all that’s similar between the different game modes.

The “core” gameplay (as in the first mode you play and the one to feature most heavily, though it still appears for less than half of the adventure) involves rolling the pizza in a small arena, crushing various skeletons. As the levels progress new enemies are constantly appearing requiring your pizza to jump, slam the ground, and roll it’s humongous heart out to avoid getting skewered by all manner of undead creatures. 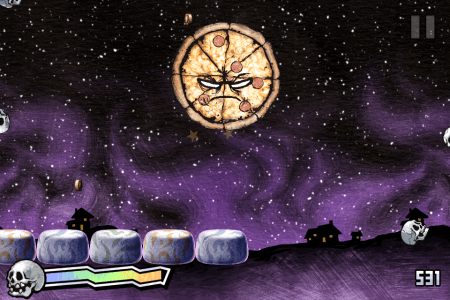 Beyond that, there are a ridiculous amount of other modes involved in completing the game. Bouncing off brains to crush planks, slamming into buildings attempting to avoid civilians and bring down skeletons, freeing puppies from prison, boss fights in which giant skulls and giant pizza are locked in a battle to throw each other off a cliff, and a parody of angry birds, in which the pizza has to destroy some simple buildings to destroy the skulls inside. There are many more, but this entire review would become a list.

The thing to note is that through clever variations, no level of the same mode is ever the same as the one before it and that the controls remain solid throughout. And because levels are unlocked based on a star system (each level gives you the opportunity of three-star completion), if there’s a mode you find too challenging or don’t like, you can go ahead and skip it entirely. The three-star system also adds a great amount of replayability to the levels.

You can also use dollars earned in game to customise your pizza with everything from different toppings, to hats, to varying faces, or even turn the pizza itself into entirely different round object, like a bagel.

The only issue I have with the game is that occasionally the controls do go a bit wonky, particularly on the levels where the pizza is sliding down a snowy mountain collecting coins and crushing skeletons. To jump you tap the screen, and to do a body slam you tap again while in mid-air, but on some of the snow levels, though the pizza was firmly rolling on the ground, my first tap was interpreted as a slam. This got a little frustrating as the complexity of the platforming in the levels increased. However this happened rarely enough to be merely a bug-stain on the game’s wind-shield, rather than being a chink in the armour. 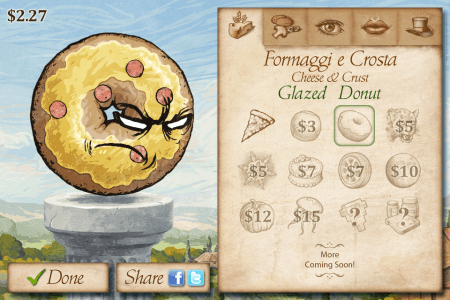 The sheer amount of content available in Pizza Vs. Skeleton is not what makes it stand out. What makes the game stand out is the fact that all of this content is polished, varied, and (for the most part) controls wonderfully.

Pizza Vs. Skeleton‘s graphic style is like a distant cousin of the cartoon style so prevalent in iOS games, and this is the famous cousin who wins a Nobel Peace Prize or becomes president. While still definitely a cartoon, the hand-drawn aesthetic given to the various enemies, location, and the pizza itself pull the game’s presentation well and truly above the others.

Though it is perhaps not as impressive as some of the iOS games out there renowned for their graphical fidelity, it still pretties up nicely and some of the levels will make you pause and take it all in for a moment.

In the audio department, there’s a good variety of musical themes associated with each mode, and the crash of a giant pizza tumbling into and destroying buildings, skeletons, and the icy slopes on which it’s snowboarding sounds as powerful as it should. 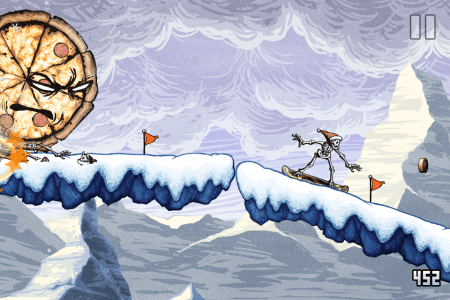 Pizza Vs. Skeletons does something very few iOS releases do: it dumps the concept of a core gameplay type and instead focuses on providing a fresh, varied experience each time the player reaches a new level. Mix that in with an art style that sets it apart from the muck, and Pizza Vs. Skeletons is a truly unique experience that you can’t have from any other game or any other platform. It is the epitome of a game designed from the ground up for the iPhone, and it is well worth your $2.99.