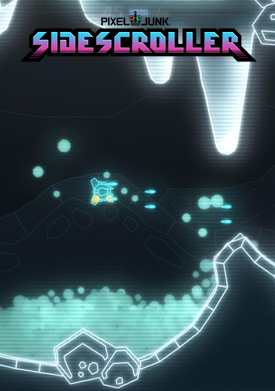 Overview:
It can be a tricky thing making a decidedly old school game feel authentic and modern all at the same time. Like a fat man dressed like a ballerina, putting on a fresh coat of paint doesn’t always help the overall concept. Lots of indie developers make classic style games with updated graphics but the same rote gameplay from bygone eras. The problem with this is the medium has moved forward and if you’re not in it for a nostalgia trip then you’re not getting anything out of the game. Q-Games and the PixelJunk series have had a pretty good pedigree with previous releases but does SideScroller live up to the standard or fall flat? 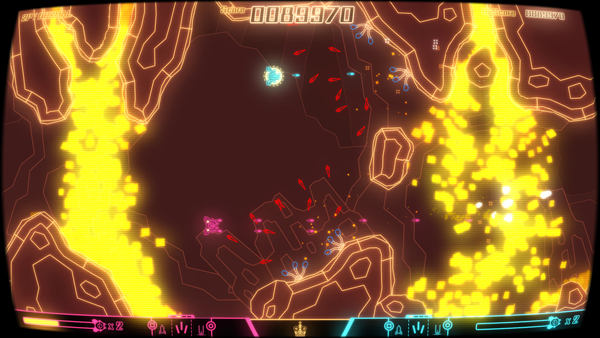 Visuals:
The very first thing you’ll notice when booting up PixelJunk SideScroller is the visuals. They’re striking with a ultra modern retro vector line look with a very selective colour scheme. The edges of the screen are concaved and warped a small degree to make it look like a you’re playing on an arcade cabinet with a tube display. At the title screen you’re greeted with an insert coin title which further sells the idea. Every level remains consistent with the vector look but plays with the colours used so they all feel very different. Even when you’re playing the game on different difficulty settings you’re treated to a new look for each level depending on the setting you’re on. There are a lot of elements at play in SideScroller such as lava, water and gas, (think PixelJunk Shooter) and each look beautiful using the games assets with water rendered as small bubbles that move around realistically using the in game physics (also from Shooter).

Audio:
One thing the PixelJunk games have been known for is audio. Whether it’s the awesome soundtracks or the sounds of their effects it has always been consistent and PixelJunk SideScroller is no different. UK hip-hop duo Alex Paterson and Dom Beken of High Frequency Bandwidth earned a BAFTA award nomination for their PixelJunk Shooter soundtrack and they’re back with remixes and some new material for SideScroller. It should be noted that PixelJunk SideScroller is actually an extension of a bonus area from PixelJunk Shooter 2, which is why the remixes are rather apt and it’s also why you’ll see some carryover with some mechanics and enemies from the Shooter games. But the music in SideScroller doesn’t feel like a bunch of rehashes. While there’s certainly a style that carries over from the games, the music in SideScroller certainly has it’s own vibe going for it and can be appreciated independently from the two prior Shooter games. 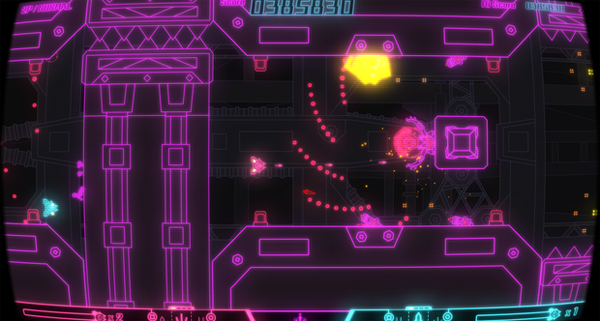 Gameplay:
If you’re looking for a game that seems horrifyingly brutal and forgiving all at the same time then go no further my friend, PixelJunk SideScroller is your bag. Taking a traditional bullet hell and side scrolling shooter (hence the name, duh) and adding just the right amount of modern conveniences SideScroller reminds me of all that time I spent playing games like 1942 or Gradius when I was younger by throwing a lot at me all the time but is at the same time forgiving by adding in much needed checkpoints that you’re able to perpetually restart at, albeit without your score if you lose all your lives. If you’ve played PixelJunk Shooter 1 or 2 then you’ll see some familiar things such as some enemies and the elements. When you’re hit (and don’t have shield power-up) you move into a damaged state in which your ship is overheating. The only way to alleviate this is by dropping your ship into water to cool off. You’ll run into water all over the place whether it be from dripping stalagmites or waterfalls and pools. In addition to the water you’ll also encounter lava and gas which will be ignited by lava if the two touch. You’re given 3 guns to play with that can be swapped to on the fly in SideScroller and you have them all at the outset of the game. There’s the standard machine gun which will be your bread and butter, a laser cannon which is super powerful and can shoot through ice but has a slow recharge and smart bombs which are effective for enemies stationed to the ground. Each weapon can be upgraded independently and you’ll have to experiment to find out which will be best for the scenario you’re in. You’re also given a charged attack which will launch your ship through a swath of enemies.

There are 3 worlds and 4 levels in each with a boss in each final world level. Each boss is unique and a blast (no pun intended… well maybe) fight. Once you finish each of the worlds you’re treated to the final level. And I mean treated in every sense of the word. The final stage in this game is almost worth the price of admission all on its own. You have a long level with a boss cycling through with huge graphical changes and easily the best song in the entire game making love to your ears. If you decided to play PixelJunk SideScroller you owe it to yourself to finish if only to see the final stage.

Overall:
So is PixelJunk SideScroller for everyone? Absolutely not, but none of the PixelJunk games are like that. Not everyone will fall in love with what this series has to offer. But if this game seems up your alley they it’s going to really be up your alley. It may be a bit polarising. Not a lot of people yearn for a sidescrolling shooter these days. But if you’re one of those people then you would be foolish to miss PixelJunk SideScroller. It’s a love letter just for you.