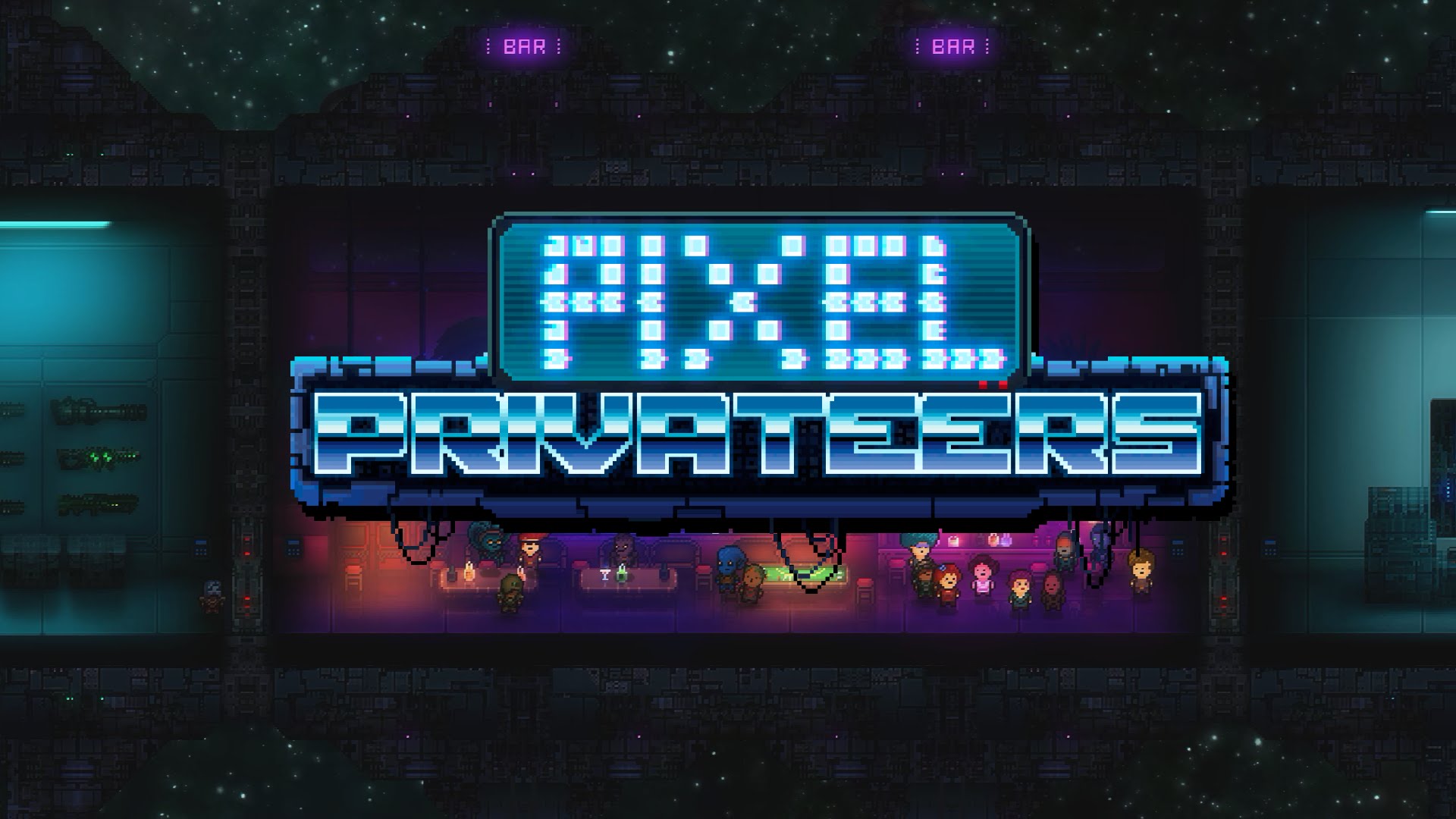 Pixel Privateers is a squad based tactical RPG that features a vast universe to explore and plenty of loot to discover. The game emphasizes robust customization options with an interactive ship and deep skill trees. Players can opt to explore the universe alone or invite friends along to fill out their squad.

The plot of Pixel Privateers is a pretty standard sci-fi adventure with plenty of different factions attempting to stake out their little corner of the galaxy. The writing is decent and is rather light hearted for the most part. The story serves as a pleasant backdrop to Pixel Privateers that gives the gameplay a little bit of cohesion, but is no where near the game’s main attraction. 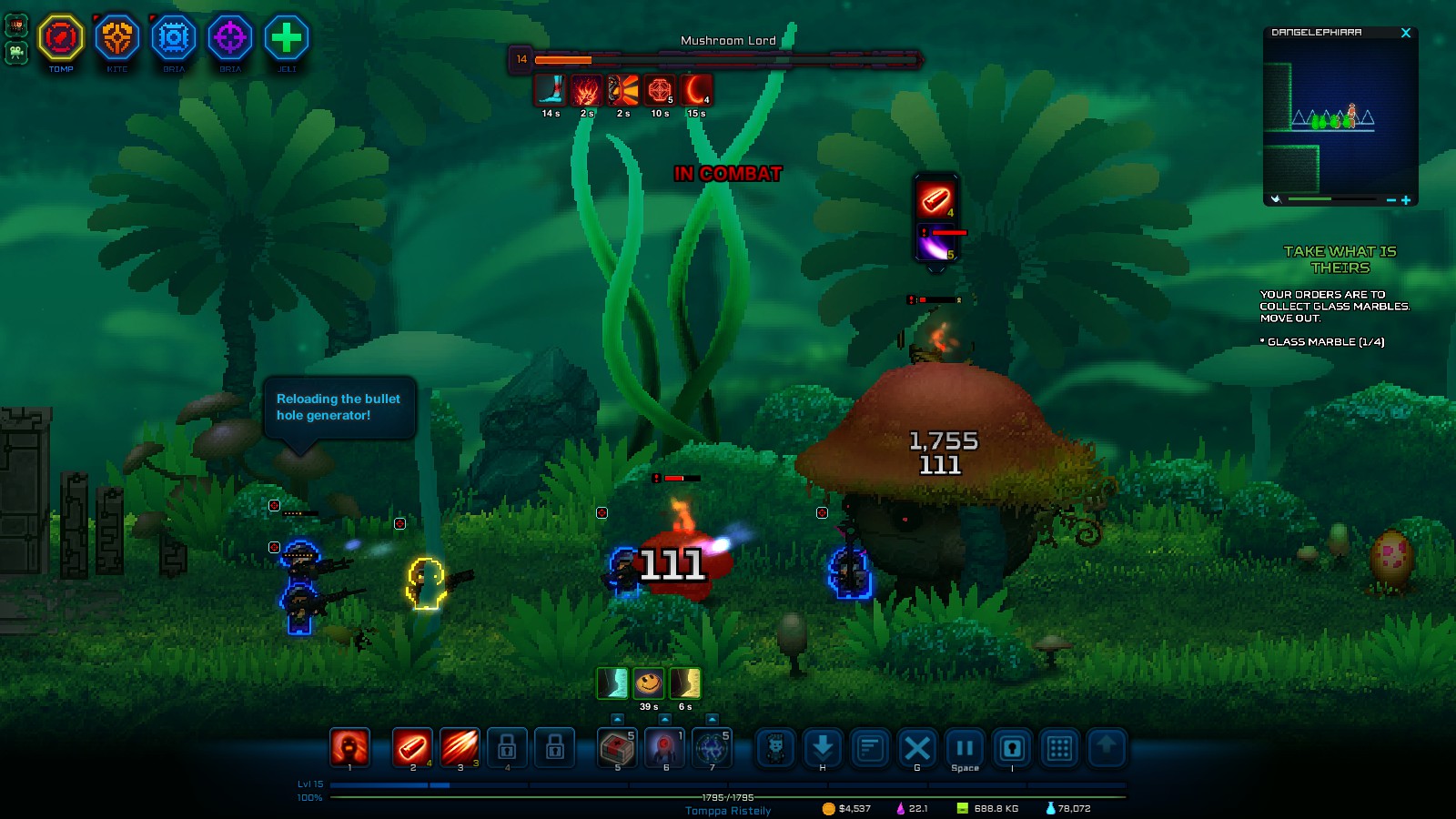 Pixel Privateers is focused on two main phases: an FTL-style galaxy map where players travel around the galaxy and squad based RTS missions. When not on mission, players can access to their ship’s facilities, request missions, and travel to different planets. Each faction can generate three missions at nearby planets. Travelling from planet to planet requires fuel, which can be purchased at planets with a marketplace or retrieved from planets during the course of a mission. Ships also keep a store of material that is used to teleport landing crews onto to planet, replicate items, and clone crew members. Players need to keep on top of their remaining resources, or else they can soon find themselves stranded and forced to use a distress signal. Distress signals can bring by a friendly ship that will bail the player out or can draw in some unsavoury types looking to prey on desperate folk. The light resource management sim gives the loot system a nice layer of complexity as players will constantly have to make the decision between equipment upgrades, material, or money.

Character progression comes in two parts. Characters progress individually by equipping better gear and improving their stats. As a character levels, they gain two to three points for the player to spend. Ideally, stats are spent based on the requirements of the character’s class. Each character’s class can be changed depending on the tool they hold. It is highly unlikely players will want to cycle classes at all since different classes require different stat builds. Each character will have two abilities that are unlocked as they gain levels and one ability based on the tool the character has equipped. I find the design of the stat/class system to be well balanced for the most part, though I think I would have preferred the carrying capacity/strength stat to be a little more generous. Additionally, all characters are also affected by talents from the research tree. Players earn research points from alien items recovered during missions. Points are then converted in the science lab for technologies that provide a variety of buffs for specific classes, equipment types, or general gameplay. Unlike individual character progression, it is possible to reset researched technologies to account for changes in overall tactics. The dual layered progression system strikes a good balance between providing flexibility for experimentation, while still rewarding consistency. 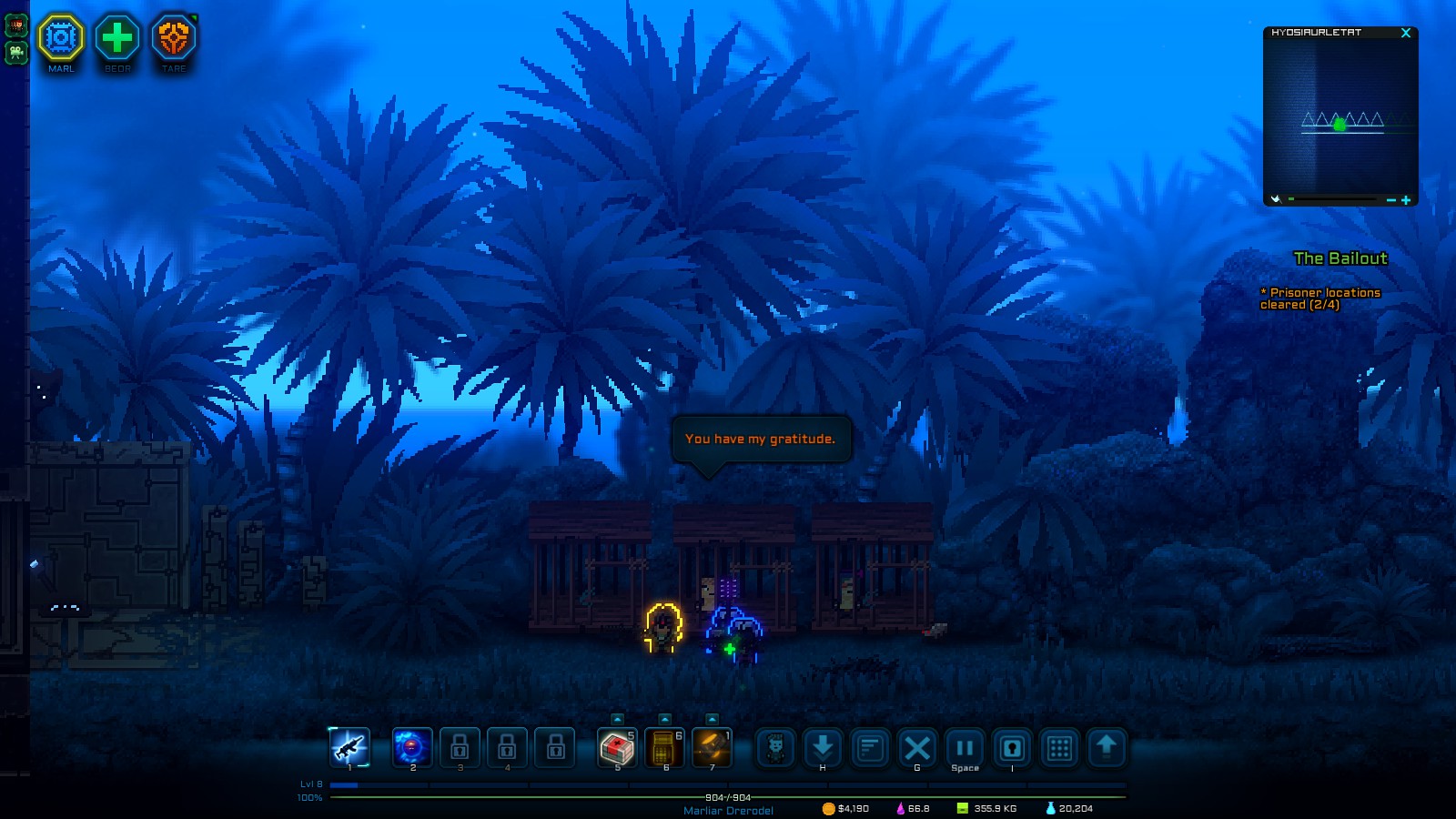 Once a squad teleports onto a planet, players manage their squad in a side scrolling format. The missions tend to be standard MMO-type requests, such as collect X number of items or kill Y number of enemies. The enemy variety is good, with a nice balance of ranged and melee units. The boss battles are the highlight of the game as these fights tend to require a lot more skill and require players to dodge telegraphed attacks.

Battles are waged in real time with a pause option to give players time to issue commands. Players can issue basic commands to individual characters or the entire group at once. Some character abilities can be toggled to cast automatically, while others require manual input. By default, the game uses a control scheme found in most action RPGs and MMORPGs. Pixel Privateer’s control scheme works well enough, but could use some more consistent user feedback to acknowledge when instant abilities with no cooldowns are cast while the game is paused. I would have also appreciated more granular controls for squad formation. The player can organize the squad’s marching order, but being able to set distances between characters would make using abilities like smoke bomb a lot easier. My biggest pet peeve with the game’s control scheme is the lack of automatic attack. An enemy can whale on a character to death, but the player still needs to manually guide each character to attack the enemy. I believe giving characters a short auto-target range and make them auto-target any hostile that attacks them would make the game more enjoyable. 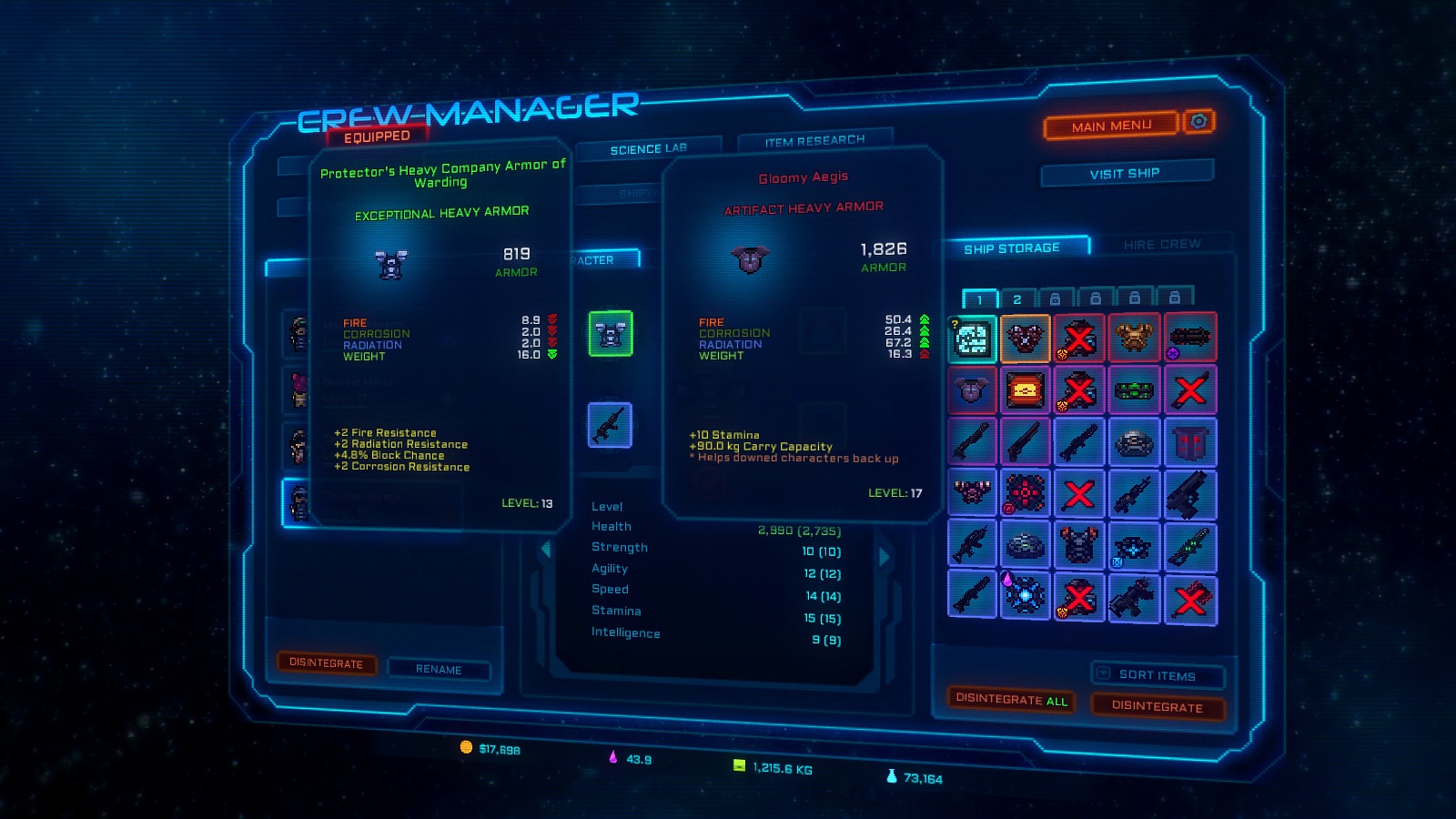 Pixel Privateers provides quite a bit of options for fine-tuning difficulty. Players can adjust the challenge level of each mission, which will adjust the quality of loot accordingly. Additionally, the truly hardcore can opt for a rogue-like mode where squad members cannot be cloned. Once a squad member dies, they die forever. Unfortunately the game does not do a great job of scaling difficulty for co-op. It appears that the game scales to the host, so bringing a high level friend into the game will make missions way too easy.

As the name implies, Pixel Privateers features a pixelated art style. All the standard science fiction imagery has been recreated in pixel form. The game features several different planet types that keeps missions visually fresh, and character sprites change depending on the equipment used. On the technical side, the game is not particularly taxing due to pixel art style and but still comes with a few graphic options to make the game suitable for laptops with integrated graphics or reward stronger PCs with some eye candy. 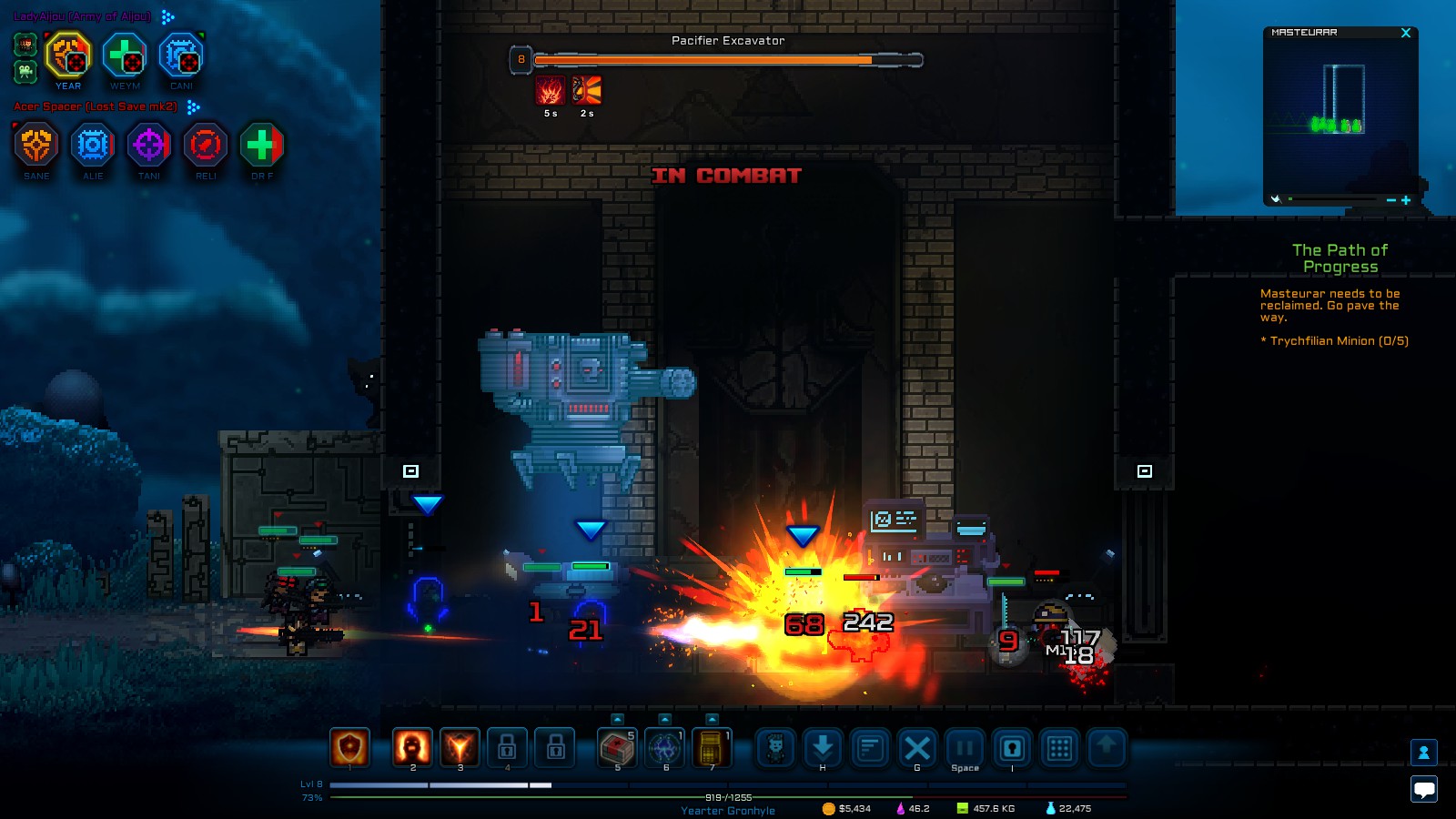 Pixel Privateers delivers an enjoyable audio experience. The sound effects are reminiscent of the 8 and 16-bit era. The chiptune soundtrack features an epic score that fits well with the fast science fiction universe.

Pixel Privateers is a solid little loot grinder that is complex enough to keep a player’s attention. While the mission objectives are a bit predictable, the epic boss fights and co-op support more than make up for it. While the game’s controls has a few quirks that requires a bit too much micromanaging at times, the game presents an enjoyable squad based RTS experience that is easy to learn and scales well to a large variety of skill levels.

Though the game requires a little too much micromanaging at times, Pixel Privateers is a solid little loot grinder.
8