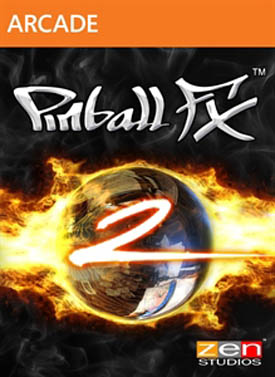 Plants vs Zombies are everywhere at the moment, from their triumphant conquering of mobile devices with their tower defense gameplay to the recently successful outing into the world of third-person shooters. Well now Crazy Dave’s garden grown guardians have taken their fight with their eternal brain-eating enemies to a whole new battleground – a Pinball table. Pea Shooters, zombie hordes and a whole lot of fun have come to Pinball FX 2 and Zen Pinball 2 owners everywhere in this latest DLC. While Plants vs Zombies Pinball doesn’t bring too much to the world of digital pinball games, it is still a fun new table to play on filled with bright colours and those wacky characters you have come to know and love from PopCap’s Plants vs Zombies franchise. 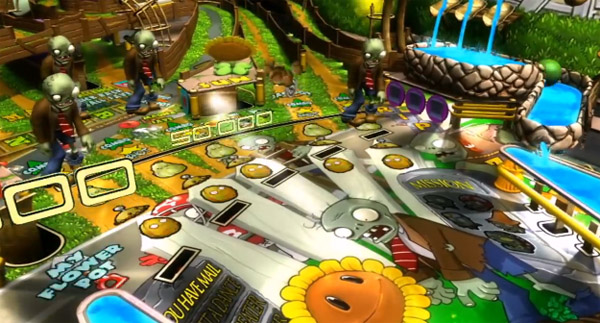 Pinball as we know it has been around for centuries, but the developers of Pinball FX and Zen Pinball have managed to capture the sights, the sounds and the fun of hitting a ball with those two little bumpers and bring it across to the digital platform, as well as creating one or two new features that wouldn’t normally be possible on a normal table.  Plants vs Zombies Pinball keeps this tradition alive and well, and its use of the license makes for some interesting and unique interactions.

When it all boils down to it, pinball is about keeping your ball on the table the longest and racking up the highest score. You do this by defending a small little opening with two paddles, which flick the ball back onto the table. In this brightly coloured iteration, you can increase your score multiplier by taking down the zombies and jumping into the back of Crazy Dave’s car as he drives you to safety. 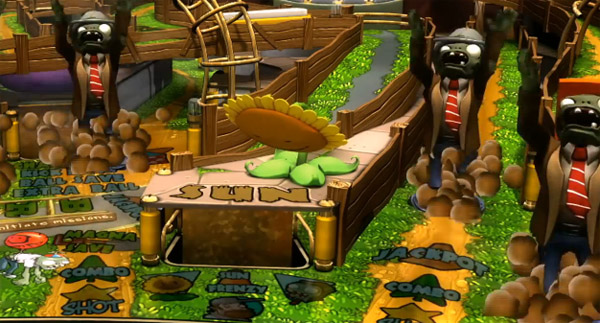 Fulfilling certain requirements (like getting your ball to hit a certain point) unlocks the Zombie horde, who will slowly shamble towards you. It is your job to defeat them all with your trusty ball and paddles in order to unlock the score multiplier that they provide. The zombies act just as they do in the original tower defense game, with regular zombies going down quickly while coneheads and bucketheads take a few extra shots.

As much as the Plants vs Zombies feel is present here, this is still a pinball game and that means all the bells and whistles you would expect are here. Everything from Multiball, to secret paths to knock your ball into make their mark here in what would be a fun pinball experience even without the license. 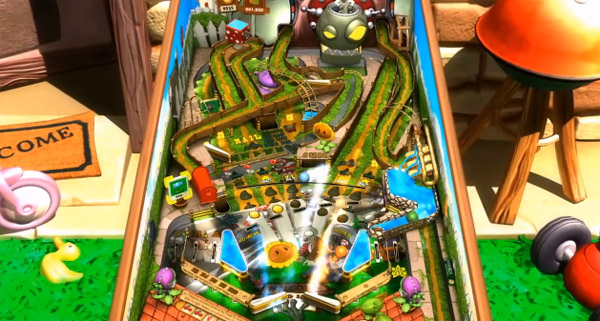 Plants vs Zombies pinball has managed to capture the look, feel and sound of the PvZ franchise perfectly. Everything from the characters to the look of the table and even the character voices and sound effects are taken directly from the original game. As good as it is to feel right at home when playing this game, it does sometimes come across as a bit cheap and lazy, especially since there are little to no sound effects present that DON’T come from other games. Would it have been too hard to have Crazy Dave yell out “MULTIBALLLLLL!!!!” Just once? 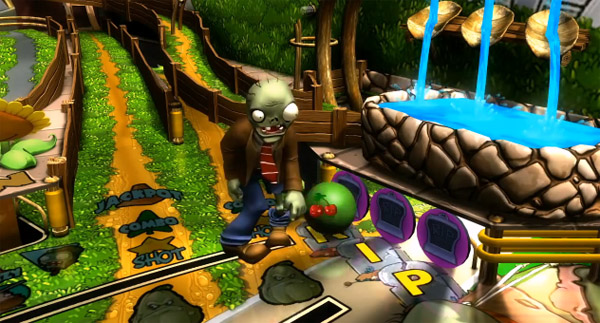 There is a strange feminine voice that alerts the player when various events take place; like when you lose your ball, or when you kill a zombie. I can’t say for certain who this voice is, but I am assuming it is the Sunflower (largely cause she is one of the only female characters from the franchise) but there is nothing to quite say who or what is actually speaking. It is unusual and were this a more intensive gaming experience it would break the immersion. Luckily, pinball is as casual and friendly as it gets so this is more of a random occurrence than a real distraction.

While the sound choice is a little off, the visuals are amazing. Considering this is just a pinball table, the extra little details that have gone into making it look like a real part of the Plants vs Zombies world. The ways that the zombies pop up pout of the ground and shamble along, just look really cool, and the fact that your ball is a green pea pod is a nice touch that fans of the franchise will recognise. 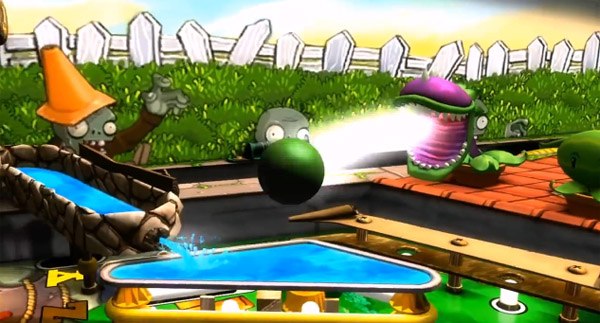 Plants vs Zombies Pinball is… well it is pinball, plain and simple. You flick the bumpers to launch your ball around the table to try and get the highest score possible. People have been playing it for years and this just slaps a fresh coat of paint and a lovable license onto the already popular game. Luckily, the Plants vs Zombies license feels right at home on a pinball table, and the developers have managed to bring across enough of the vibe and overall tone of the franchise to add a whole other layer to an already sound pinball experience.