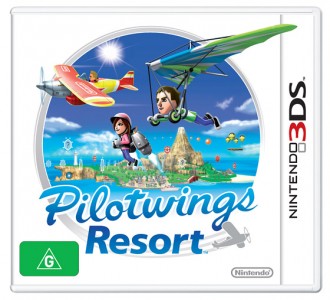 Pilotwings resort is a game that allows players to fly across an island, completing challenges and taking in a fair few amazing sights, all rendered in immersive 3D utilising the 3DS’ 3D capabilities.

Pilotwings Resort takes place on Wahu island where players are tasked with completing various challenges across the resort island in pursuit of entertainment. Or at least, that’s what I would peg the storyline as, considering the game doesn’t actually have a storyline at all. Though, it isn’t the kind of game to require one. I feel as though it’s the kind of game where you make your own story as you’re gliding along and taking photos of the scenery. 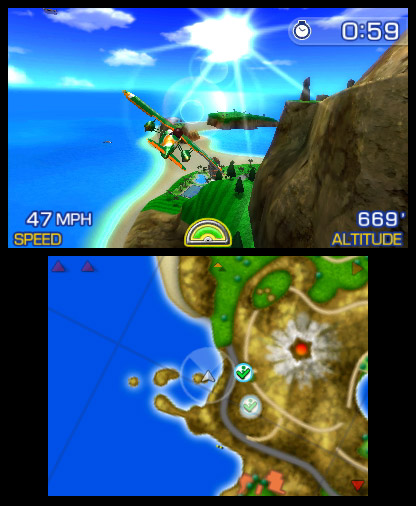 “Hey there [playername], what’re you playing?”

“See that volcano there?”

“I once flew a jet plane down it and into the lava.”

“I don’t think we should be friends any more.”

The gameplay in pilotwings resort is basic in its scheme, but also hard to master. You slide the circlepad to steer/veer and you use the corresponding buttons to do whatever is needed for that vehicle. For instance, an aeroplane will go forwards automatically, but by hitting A you can utilise the boost function.

When beginning a game in Pilotwings resort, you will be presented with a file select screen. Here you select an empty file and go on to be greeted to the resort by an administraotr at the ‘Wuhu Sky Club’. After being greeted, a player will select their Mii that will be their playable avatar, as well in put a signature for file associative purposes. A lot of this is done on the touch screen, which is a nice inclusion considering that this is one of the few titles to have touch-screen support at the moment.

All the game menu’s are accessed using the touch-screen and from the get-go you will have access to all game modes with the exception of ‘Dioramas”. Dioramas is unlocked as you go through the games “Mission Mode”. All up, the modes are: “Mission Mode”, “Free Flight Mode”, “Dioramas”, “Options” and “Member Card”.

The Member Card mode allows you to view your files membership card to Wuhu island. It keeps track of your Mii and other kinds of play data, such as flight time, stars awarded and your total points. Other than for the purposes of admiring your own work, or bragging to friends, I don’t really see much use for this feature. Though it is definitely something that I enjoy poking at from time to time, so it shouldn’t be removed or anything.

Options mode is your standard games option feature allows you to mess with the games audio as well as other options, such as inverted flight controls, rocket pack camera and the in-game map. 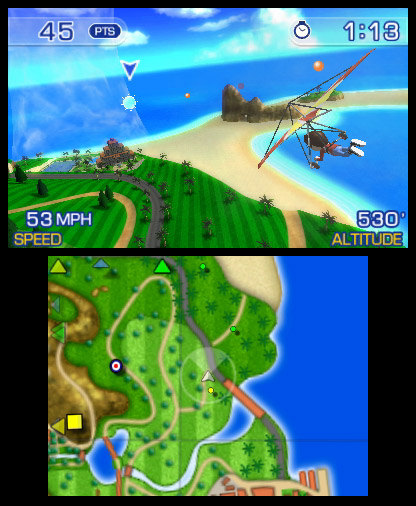 Floating through the air on a hang glider.

Dioramas in Diorama mode are unlocked through completing certain objectives in the free-flight mode of the game. These involve going through information rings, completing trick rings and the like.

Free Flight mode is a mode that allows you to fly freely over the island for a limited time. And by limited, I mean very limited as you only get two minutes to fly around the island and take in the sights. The main appeal of free flight mode is that it allows you to unlock dioramas in the diorama mode. Across the island are various points of interest that will have an information ring above them. There are also trick rings, which involve you completing a trick inside them in order to collect them. Both types of rings accumulate over each play through, so it isn’t necessary to collect them all once, which is a relief because at two minutes of flight time, it’d be quite difficult to accomplish.

Mission mode is the bulk of the game. This is where you have differing tiers of difficulty and you must advance from the lower tiers to gain access to the higher ones. Each tier has it’s own challenges for each vehicle type, so plane, rocket belt and hanglider. The challenges can vary from incredibly easy to as tough as nails. I mainly found this to be the case with the rocket belt as it’s physics seemed to be slighty wrong. It felt a bit too floaty, like, there was too much inertia and not enough friction, you would just float outwards and it always seemed to be a bit further than you intended… expecially when you were using the lighter thruster. The missions generally involve flying through rings (or do tricks through), collecting capsules and landing successfully on a landing platform or in a landing strip. With the rocket belt, there are also refuelling platforms in some of the challenges.

At the end of a challenge, players are rewarded with a score and are presented with stars depending on how well they completed the challenge. The stars are used in unlocking the next difficulty tier and the score is a measure of how many stars you will attain (you can check the score requirements in the mission menu). Though, for some reason, I’ve found that when I’ve done worse at the challenge I seem to get a better score then when I try to complete them properly. I think that time plays a fairly large role in the final score of some events. When I say that I did worse, I mean that I forgot a ring somewhere, not that I did abysmally, so maybe there was some kind of trade-off that worked in my favour?

The visual style is very similar to Mii related games that Nintendo has released in the past on it’s other consoles (mainly the Wii), games such as Wii Sports Resort. This simplistic style allows for more colourful and clearer renderings of the Mii characters, as well as the island and the vehicles.

Graphically Pilotwings Resort is superior to all 3DS games on the market at the time of writing and it is also the most colourful. It’s hard to put into words how impressed I was with the game graphically; I hope that Nintendo continues to release games of this fidelity or higher in the future as it is just so pleasant on the eyes that it’s really hard to fault. 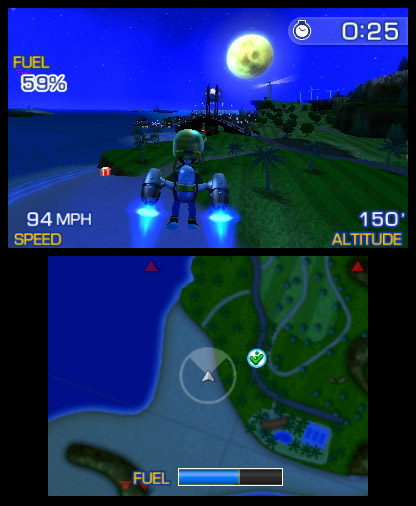 Though, there was one thing I was disappointed with slightly and that was the inclusion of Mii’s. I understand why they’re in the game, and of course it’s easier to connect with ones own Mii than it is to a whole new character, but as someone who has played the previous Pilotwings games, not having those previous characters feels a little strange. Though, it has no bearing on gameplay, it just would have been nice to see past characters rendered in this new graphical foundation.

Visually I am quite impressed by this title. I only wish that free-flight mode was longer than two minutes in length so that I could explore the island properly and take in all the pretty sights. For some reason, whenever I do a mission, I always try to complete the mission… but I could probably do it in one of those. The only thing that I can really fault graphically is the 3D. I’m not sure if it’s my eyes or the 3D rendering of the game, but at 100% 3D it was too difficult to create a fully 3D image, it would just become two slightly different images. Though any percentage below that worked fine.

Pilotwings resort is more relaxation than menace, and it shows in the games soundtrack and audio.

The soundtrack / background music is not of a pacing that I would ever have considered myself to be into, but when coupled with the gameplay, it fits so perfectly that you can’t help but sit back and feel relaxed while enjoying the sounds projecting from your devices speakers. The background ambiance of birds chirping and waves crashing against the island only continue to add to the superb background score and help shape the feel of the island in the players mind. 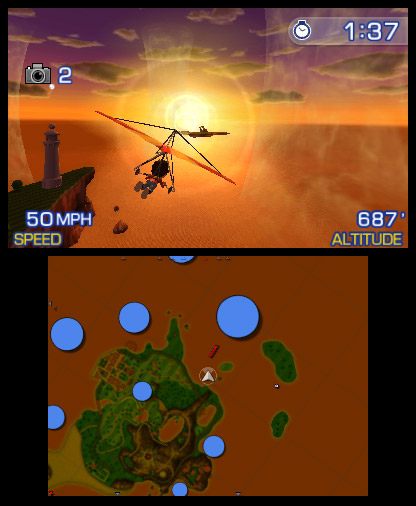 The game sounds prettier than this scene looks. Which is incredibly hard to do.

Each vehicle has their own sounds which makes them even more unique. This is even true for the jet plane and the sea plane. The sounds are so fitting that I felt that I could actually maybe be piloting one of these vehicles myself, sometimes. However, the rocket belt is horrible and regardless of how well it sounded, in my personal opinion, it should have its physics reworked (it’s really not that bad, I just can’t get used to it… it’s more a case of the gamer than the game).

Pilotwings Resort is an awesome title for an awesome device. It allows players to become a pilot of various flying devices and to complete a vast array of fun and challenging challenges around the Island of Wahu. The game is graphically solid and hard to fault. It also features a beautiful audio track  that helps to immerse and also relax players (especially on those later challenges which can be a pain). 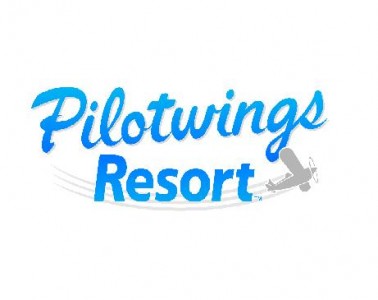