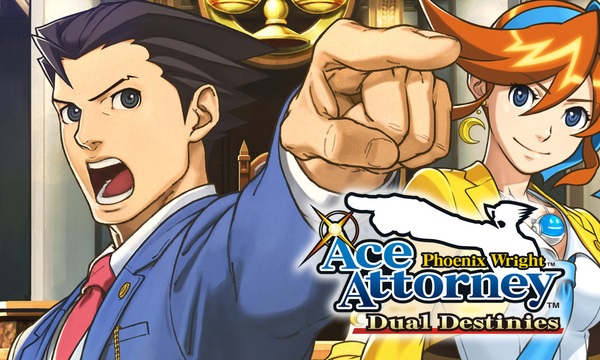 Overview
Outside of appearances in fighting games and one spin-off title making its way overseas, it has been close to six years since a main entry in the Ace Attorney franchise was released in the West. After falling off the radar for such an extended period of time, Capcom has brought Phoenix Wright: Ace Attorney – Dual Destinies over to Western audiences in what may be the most intriguing theme in the series, the dark age of law. Does Dual Destinies’ 3DS release deserve your time, or should it have been given the guilty verdict and kept in Japan?

Story
Roughly a year after the events of Apollo Justice, the legal system has become a dark place. After Phoenix Wright was disbarred over the events of the past game, many lawyers and prosecutors have begun taking on the philosophy that the end justifies the means, regardless of how legal these methods may be in a standard court of law.

The story of Dual Destinies unfolds over the course of five separate cases, some of which tie-in to each other through various events and revelations. Over the course of these five cases, Phoenix himself takes the spotlight more often than not but players are also given cases to solve while working as Apollo. These two are joined by a new hire to the Phoenix Wright Anything Agency named Athena Cykes. 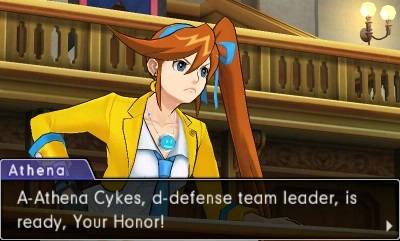 Athena’s skills and determination have allowed her to become a lawyer at the relatively young age of 18. She has trained herself in analytical psychology which gives her a leg up on witnesses as she is capable of using a robotic assistant named Widget to read the emotions of a witness and discover when they are lying about certain aspects of their testimony or are misremembering events due to psychological trauma that is clouding their memory.

Despite being one of the fresh faces introduced in the game, Athena quickly becomes the highlight and focus of Dual Destinies as she is always involved in one of the cases, whether it is as an assistant, an attorney, a friend of one of the defendants, or on one case something else entirely. Thanks to the amount of time spent on Athena she actually becomes one of the most likable and interesting characters in the game, and perhaps the series even, thanks in part to the amount of backstory and character development she is given as well as her attitude and behavior. 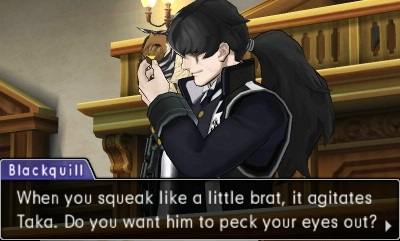 Of course Athena isn’t the only new addition to the cast as a number of characters are introduced with every case that the player goes through. Some of these characters return from past games but a number of them are new faces with various personality quirks and oddities that help keep the Ace Attorney fresh and often humorous despite the fact that these trials are about murders.

Outside of Athena’s addition, a new rival named Simon Blackquill, a convicted murderer who still works as a prosecutor with the power of suggestion also shines in this game as a dark and often sarcastic swordsman who sicks his hawk on anyone he feels like. It also helps that every case is like a rollercoaster ride of twists and turns where almost everyone has something to hide and as players uncover the truth, they will often be amazed by the revelations that occur and who the true criminal may be.

Gameplay
Those familiar with the Ace Attorney series will hear that very little has been changed in this version of the game as far as structure goes. Players are introduced to a case, often via anime cutscene, and then they must investigate the situation and witnesses in an effort to build a solid defense to use in court. 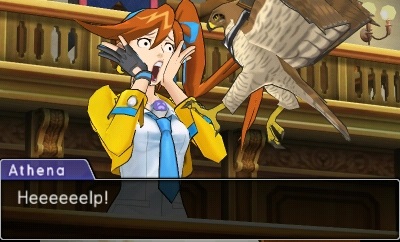 As the player investigates they will move from area to area as they feel like and as they do so they will encounter various characters relevant to the case, most of which will end up on the witness stand testifying later in the trial. By asking these people questions and presenting evidence found around the crime scene and area players can learn more about the situation ahead of time and sometimes uncover new important evidence for the trial. Phoenix, Athena, or Apollo are able to search areas a bit easier this time around as only specific places can be examined for clues and a notes section will help keep players on track and less likely to become lost in their investigation.

Once the player finds everything they need to and questions everyone, the game will advance to the courtroom phase where players will need to help plead their case and prove the defendant innocent of the charges presented to them and find the true criminal. These situations are very similar as well, as players must cross-examine witnesses by pressing for more information on statements and presenting evidence to counteract a false statement.

Since all of the playable characters have a special ability, such as Apollo’s bracelet, Athena also comes with a new ability that makes use of her psychological skills and the help of her Widget robot. Whenever Athena detects discord in a witnesses’ testimony, she can use the ‘Mood Matrix’ as it is called to detect the mood of the witness as they are giving their statement. When activated the Mood Matrix displays images from the witnesses’ viewpoint and four emotion panels, happiness, anger, sadness, and surprise. 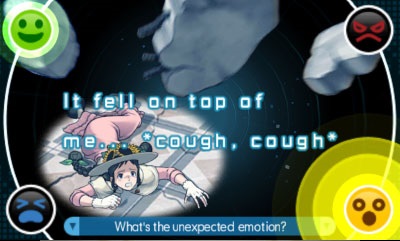 As the witnesses’ statement is given, these four emotions will blink at various levels or not at all depending on the event. If an emotion appears that seems out of place, for example being sad during a happy moment, this can be used to help weasel additional information out of the witness. It also can be used to calm down hysterical witnesses so they can sort through their emotions and remember exactly what they saw.

The courtroom sequences remain as riveting and enjoyable as ever with this additional ability as the player will often find themselves losing only to either bluff their way out of a corner or present a crucial piece of evidence that will shatter the prosecution’s accusation. There are still penalties given if the player presents the wrong piece of evidence and cases can be lost if the player makes too many mistakes and this is a possibility due to a certain factor.

As the player investigates a crime, it is entirely possible to figure out the true criminal and most of the details about the crime way before the characters in the game will allow you to do so. This means that if you know that certain evidence will work heavily in your favor, you must only present it at the proper time and doing so before then will result in a punishment. 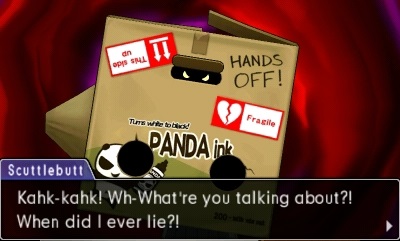 This also means that, although dialogue can be fast-forwarded through, that you may have to deal with some back and forth banter, which remains highly entertaining throughout despite this issue, over something you know can be shot down next time you can put forth evidence. Of course some of the best surprises come when the person who you thought might be the perpetrator turns out to be innocent and the spotlight shines upon a new suspect.

Visuals
Thanks to the increased capabilities of the 3DS over the original platform the Ace Attorney games were introduced on, Dual Destinies is able to provide quite a presentation. Characters now will make various movements while they wait, sometimes shifty, and have various humorous reactions to events as they unfold in the courtroom. The  character models are pleasantly presented though there are a few jagged edges here and there. 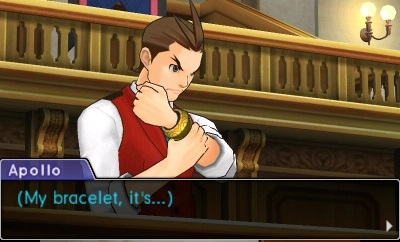 It is interesting to note that the anime cutscenes that are scattered throughout the game are also a real treat for the eyes as they have been animated wonderfully with a bit of extra blood here and there to give the crimes and important scenes a little more impact. Despite the fact that many may avoid using the 3DS’ 3D function due to having little impact or potential eye issues, Dual Destinies actually makes very good use of the 3D function with special effects often popping out nicely, though a few moments due seem to enter into cheap Hollywood style 3D of throwing things at the screen.

Audio
It is worth noting that while Capcom has brought Dual Destinies over in English, there is very little English voice work in the game as the only time we hear a character’s voice is during a cutscene or when they object in court. While this is disappointing, it is worth noting that the localization of the game’s text is wonderfully handled and is overflowing with humorous jokes, chuckle worthy puns and plenty of great moments that Ace Attorney fans are looking for. 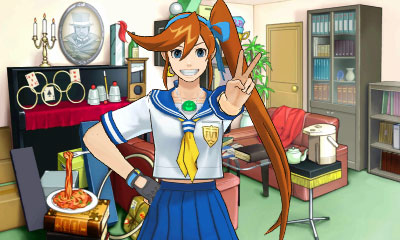 Outside of that, the game features some rather enjoyable background music that works in its favor during tense moments in the courtroom as well as when the player is investigating a scene.

Overall
Phoenix Wright: Ace Attorney – Dual Destinies delivers more of what fans of the series love and has added a few new touches to make it even better than before. Although interactivity is still limited, being seen as more of a visual novel it excels in every area. Thanks to a very well written story for Athena, a bunch of enjoyable new characters, the wit and charm the Ace Attorney franchise is known for, great cases to solve, and some surprising plot twists, Dual Destinies makes itself a title that is guilty of greatness. 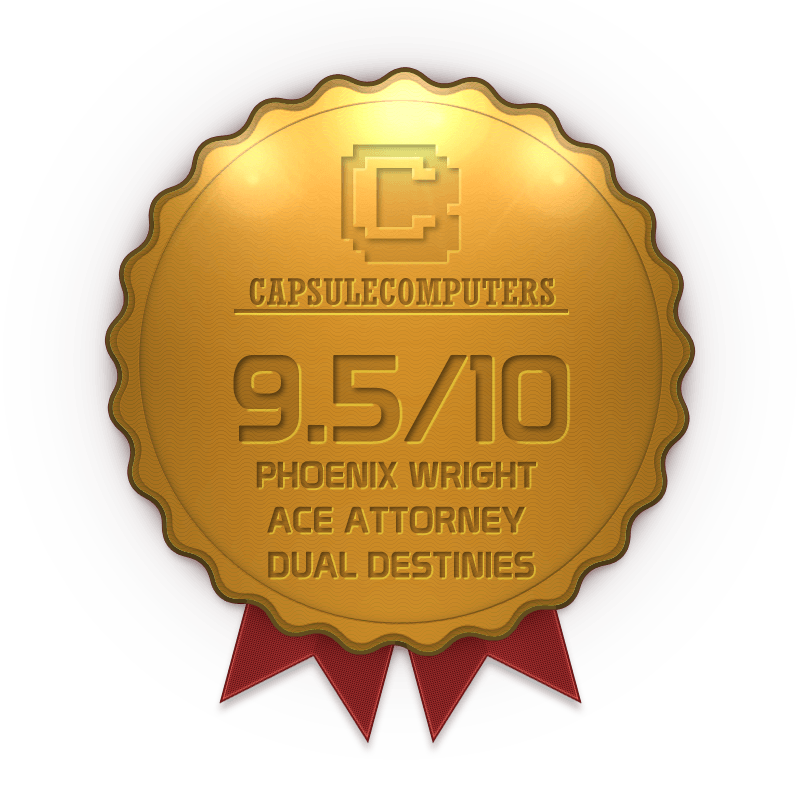