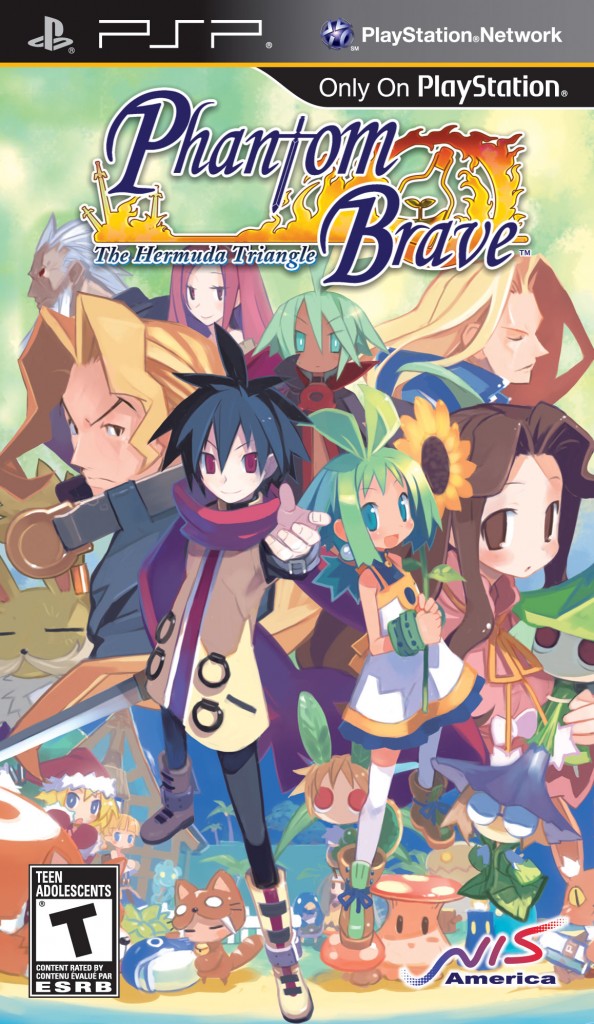 Overview:
Phantom Brave: The Hermuda Triangle has seen many iterations over the years. It was originally released back in 2004 on the PlayStation 2 and then once more on the Wii back in 2009. But now the year is 2011 and Phantom Brave can’t let the turn of a decade hold it down from coming back with more features than before. Exclusive to the PSP Phantom Brave: Hermuda Triangle has shown that ghosts never stay gone for long and are always willing to re-appear.

Story:
As the game begins you will find yourself on a dark and twisted island with three people trying to fight for their lives against the monsters coming after them. This group consists of Haze and Jasmine, the parents of the main character Marona, and Ash. For a short while they are able to hold off the cruel monsters but a large demon approaches them and Haze prays that someone will be able to protect their daughter Marona in his stead.

After skipping eight years into the future we find 13 year old Marona living on a deserted island called Phantom Island in the area of Ivoire. Only it isn’t as deserted as some may believe. In his dying act Haze’s prayer allowed Ash to become a Phantom and watch over Marona by being her guardian. The reason that Marona is able to do this is because she has the ability to both see and summon Phantoms to help her in her adventures. This is quite necessary due to the fact that she is a Chroma, a bounty hunter, and is placed in many difficult situations. 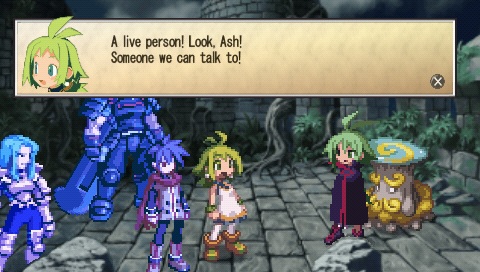 These difficulties only make things harder when people treat Marona as a cursed child and fear her. Despite the fact that the people around her call her possessed she knows that with her abilities she must do what she can to protect them. All the while a dark force called Sulphur begins to rise again; the enemy of her parents will become her own.

Even though the story may seem relatively generic at first glance the way it is told is actually very interesting. Perhaps it was the fact that an obviously young child has been thrown into a world of chaos and destruction and the only people willing to help her are Phantoms while mostly everyone else fears her for her abilities.

Also added into Hermuda Triangle is the “Another Marona” mode which is available right away instead of requiring the player to beat the entire game once. This adds not only a completely separate storyline but even more length to an already very long JRPG. With both modes of play available there is well over a hundred hours of gameplay to be had here.

Graphics:
If there is one thing that you can take away from Phantom Brave’s character design is the fact that they are quite memorable and there are a whole bunch to look at. The character art while they are talking is very impressive and brightly colored but unfortunately the sprites themselves show some of their age because of the age of the game as a whole.

Since the game was originally created back in 2004 there are a number of inconsistencies with the graphics changing from impressive looking artwork such as the World Map and the character art and then into battlegrounds which have nothing but a simple color backdrop and a relatively decent ground texture. While the character sprites can look very aged at times there is an option to allow the pixelated look of the sprites to be blurred together for a smoother look. This is obviously an aesthetic choice and those who prefer cleaner visuals can opt to allow the blurring effect to happen. 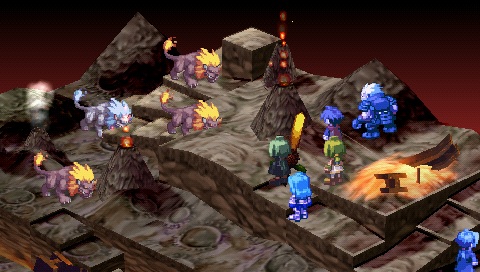 Audio:
The storyline is entirely voiced which is extremely impressive considering the fact that the game itself is only around 600MB if downloaded off of the PSN and the voice acting itself is just as impressive as the fact that there is any. The characters personalities really shine when the voice actors do their jobs well and that is exactly what happens in the Hermuda Triangle.

Other than the impressive voice work there is also the very well-orchestrated background music which ranges original compositions that fit the mood perfectly to your standard action sequence music but each one of the musical tracks is a treat for the ears and heightens the experience happening on the screen at any given time.

Gameplay:
Phantom Brave: The Hermuda Triangle is a Strategy RPG at heart and plays much like one would usually experience. There are a number of tutorials that are in place right at the beginning of the game that will allow players to be introduced to most of the basic mechanics and the special things that make The Hermuda Triangle different from other SRPGs.

Battles occur on turn based battlegrounds that allow players to move each of their characters a certain distance which is shown by a circle of movement. They are then able to attack an enemy, pick up an item on the field, throw an item or end their turn. The difference to these battle fields is that you may move in any direction you wish, even climbing on top of fallen enemies or scenery to have the height advantage. Also picking up items on the battle field will also provide better attack options; everything is at your disposal. A simple weed can be plucked from the ground and used to strike with the power of nature itself. 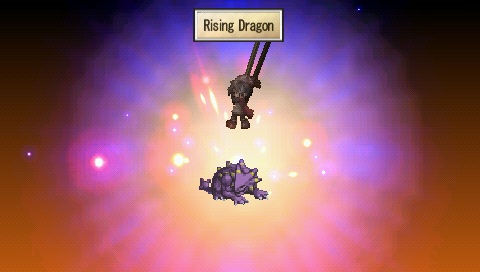 This is where the strategy part of The Hermuda Triangle truly stands out. You do have the ability to pick up items in the environment and use them as weapons but Marona will need them for a very different use. Marona possesses the ability to “confine” Phantoms to the environment around them. But what you confine a Phantom into will drastically alter its stats. Warrior classes will benefit from being confined to rocks and boulders which heighten attack and defense while lowering intelligence and speed. Likewise a mage or healing class would be best confined to a flower that raises intelligence while lowering other statistics.

The player can use up to 16 Phantoms at a time and depending on what you confine them to they can also gain specific bonuses through “protection.” This means that a certain tree may give healing powers to a certain weed and if you confine a Phantom to that weed they will also be healed after every turn. This is also used by your enemies however and will require you to destroy certain parts of nature to make the fight easier on yourself.

Another unique feature is that while Phantom’s have a certain HP limit and will fall if it ends up at zero they also have a specific turn limitation. What this means is that if you summon all of your Phantoms at the beginning of the battle then you must hope to finish that battle quickly because once a Phantom’s turn limitation hits zero they will disappear from the field and are not able to be summoned until the next battle. It is worth noting that everything has HP in this game, plants and rocks can and sometimes must be destroyed as I mentioned earlier, but even swords and other weapons can disappear if used too much. 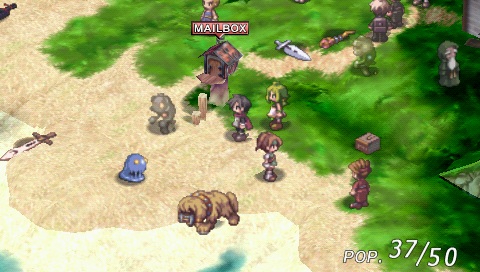 When you are not in action you are placed on your home island, Phantom Island. Phantom Island works as a hub for all of your basic game needs and even allows you to pick and choose exactly what you need. The island has a population counter up to 50 items/characters which provides the player the freedom to create specific Phantoms that will serve as a healer, or a weapon shop or even a random dungeon creator. You create new Phantoms by speaking with Marona and paying “money” to have a Phantom created, the more money you spend the stronger the Phantom is able to start out as. This creates a very in-depth creation process where you are able to customize practically everything that you want to on your island.

While all of this sounds nice in practice it can be extremely complicated despite the very well done tutorial system. This SRPG may seem too complex for amateurs to the genre and this can be off-putting at times. Battles can occasionally be quite difficult and summoning your Phantoms incorrectly can place you immediately at the losing end of a battle and nothing feels worse than facing down a large amount of enemies with only Marona left to defend herself.

Overall:
Phantom Brave: Hermuda Triangle does it again by showing that despite the original game’s age there is no reason that it cannot be raised from the past and made into a great game today. As long as you can master the complicated system of managing and equipping your Phantoms properly there is a very long game to be had here and the fact that it is portable now only heightens the fact that you will have something to pick up and play with new things in store for a long time.

I give Phantom Brave: Hermuda Triangle