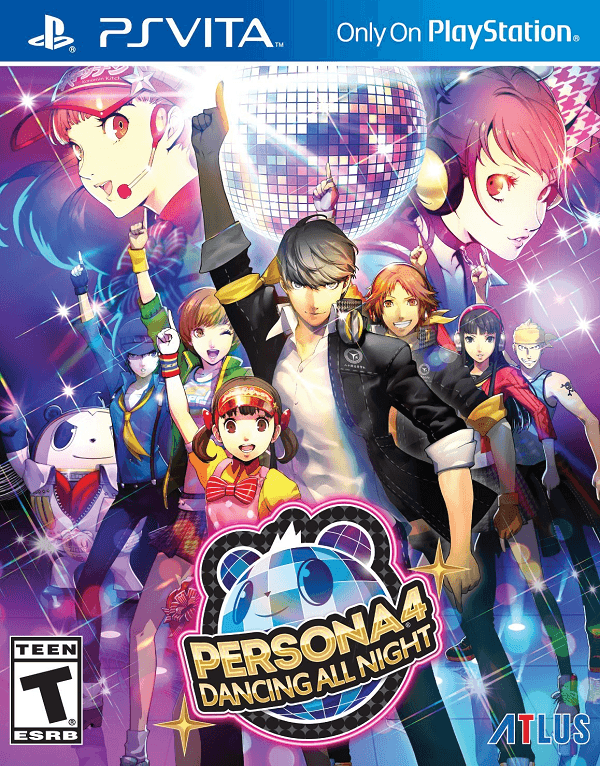 Overview
Thanks to the original Persona 4 delivering such a satisfying experience and creating characters so likable the title has remained extremely relevant despite originally being released back in 2008. Not only has this RPG been given an extended remake, it’s also seen its cast developed into two fighting games, transported to a dungeon crawling RPG, and even given a few anime adaptations. Now that the enemies are defeated and the fists have been thrown, it is time for the cast to get down on the dance floor with Persona 4: Dancing All Night. The question is, does this release continue Atlus’ strong series of titles featuring the Persona 4 cast?

Story
Taking place chronologically after the events of the Persona 4 Arena games, Yu Narukami has moved back to live in the city and Rise Kujikawa is fixing to make her big comeback to the idol industry during the Love Meets Bonds festival that will feature numerous performances by big stars from the industry. In an effort to show off her bonds that she has made with Yu and the rest of her friends from Inaba, she has invited them to perform as background dancers during her performance. 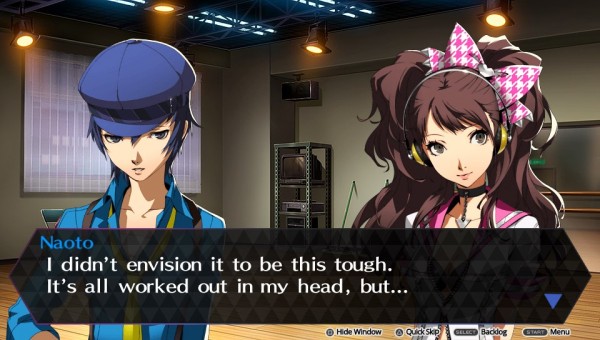 As such Rise has been focusing on training Yu and Naoto while also visiting Inaba to train the rest of the group. During one of these training sessions the three of them meet a new up and coming idol group called Kanamin Kitchen, led by the idol Kanami Mashita, who have become quite popular during Rise’s absence. Later thatnight it is discovered that the majority of Kanamin Kitchen has gone missing and Naoto tells the others that she has heard rumors of a strange video appearing on Love Meets Bonds’ website at midnight featuring a dead idol that drags people to a different world.

Due to the similarities with what they have experienced in the past, Naoto, Rise, and Yu choose to investigate and find themselves transported into a strange version of the Shadow World that is not the Midnight Channel, but instead called the Midnight Stage. The only problem is, despite the existence of shadows in this realm, they find that any type of violence is immediately nullified and that the only way to defeat and escape these creatures is by expressing themselves through dance. As such it is up to Yu and the rest of the Investigation Team to try and solve the mystery behind the Midnight Stage. 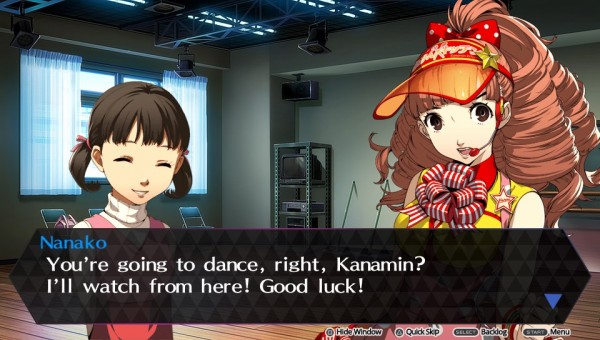 While it may start out sounding rather strange, this roughly twenty hour long story mode does lay the foundation as to why we find the Persona 4 cast dancing around to defeat enemies instead of the usual way. The lengthy storyline is quite a surprise considering the nature of the game but also does become rather wordy at times due to the visual novel style of the game which means that those going through story mode will often find themselves listening to quite a bit of dialogue before they are asked to perform a dance once again.

This does mean that those who want to enjoy the story for what it is will likely want to take some breaks now and again to play some of the game’s Free Mode since, despite the characters still being incredibly likable with all of their shining personalities remaining a big bonus in this game and there being plenty of funny moments and interesting developments taking place, it feels like a better balance may have been needed between the dances and visual novel part of the game’s story. That being said, those coming into the game and not expecting to find an interesting storyline will find themselves pleasantly surprised as this title still serves as a great example of what the Persona writers are capable of, even if they are basing it around dancing and the idol industry.

Gameplay
As mentioned earlier, there are two modes for players to select in Persona 4: Dancing All Night, the aforementioned Story Mode and the Free Mode. Free Mode allows players to select the difficulty of whichever song they choose to play, what costume they want the main dancer to wear since the main dancer for a song cannot be altered only their dance partner can be, the dance partner and what outfit they wear, and of course various modifications that will be mentioned momentarily. 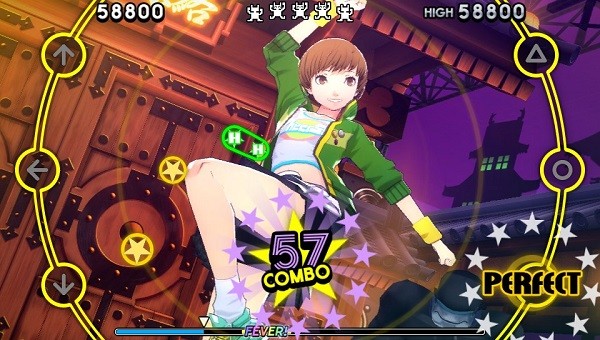 Only four tracks will be available at the start but either progressing through the story mode or completing songs on any of the three initial difficulties, with a fourth one that must be unlocked, will unlock additional tracks. It is worth noting that while almost all of the tracks can be unlocked simply by playing Free Mode that a couple of tracks can only be unlocked after completing the story and it is possible to spoil a little bit of the storyline’s ending if you choose to unlock all of the Free Mode songs first.

Now once you actually start playing a song, you’ll find a tightly designed rhythm game with a couple of ways to play. Notes will appear throughout the song and will fly towards a corresponding button that the player must touch as close as possible, with perfect ratings earned by tapping the button when the indicator is right on the button, to earn points. There are also blue and rainbow colored circles that will be produced and these are activated by moving one of the analog sticks to the side when they approach the edge of the circle. 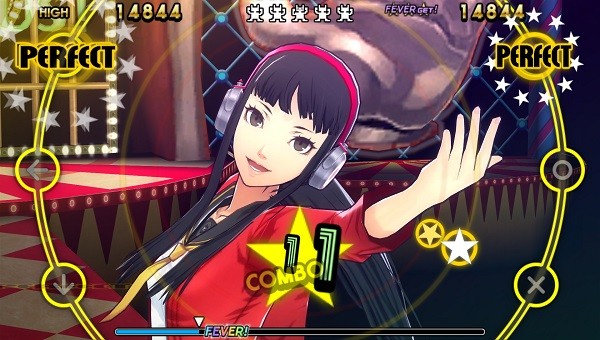 It is worth noting that if you do end up missing one of these “scratches” that they do not count as a miss but completing them does add to your combo, provide points, and if you manage to hit three of the rainbow circles players will be able to enter “Fever Mode” at specific points in the song. Fever Mode allows players to earn bonus points and if they are performing well at the time of activation, their partner will also enter the stage to perform a unique dance during that period of time. 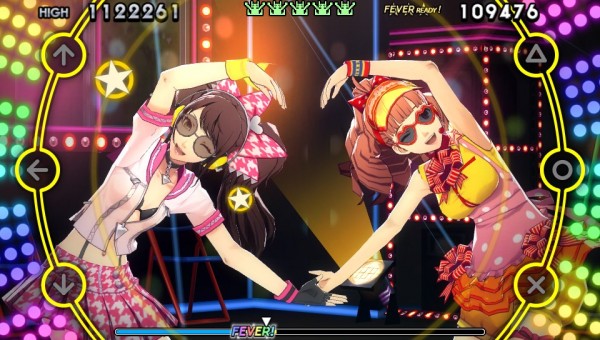 It is interesting to note that the touch screen can also be used to activate notes if you so choose, with taps completing basic notes and swipes counting as scratches, though I’ve found using the button prompts to be far easier. Of course if you want to challenge yourself there are various books that can be bought, alongside the aforementioned costumes and accessories, that will change the way notes behave during songs to provide the player with bonus points as well as items to make things a bit easier at the cost of reduced rewards, making this a game that can be easy to play through if you wish or incredibly challenging if you want to aim for the top.

Visuals & Audio
Although this isn’t the first Persona 4 game to arrive on the PS Vita it features the best looking character models we’ve seen for everyone’s favorite cast so far. Each of the cast is extremely well detailed with each character having a unique dancing style and different interactions depending on who they are paired up with. To make things even better, there are a wide variety of costumes ranging from humorous to fan-service oriented to purchase and although one would think that the wide-range of bright colors would be distracting during the rhythm gameplay, the way it is designed surprisingly eliminates this issue. 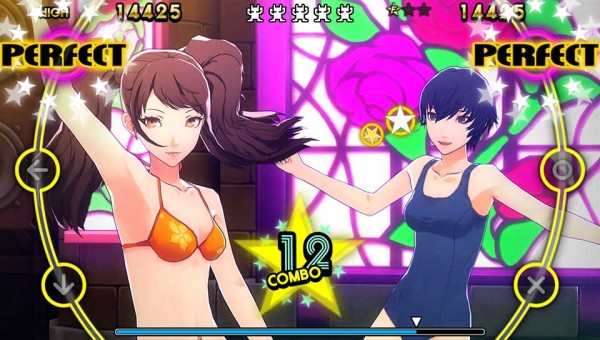 As for the soundtrack, Persona 4: Dancing All Night features remixes of all of the best tracks from Persona 4, though it is worth noting that a couple of songs have been remixed more than once meaning that there is a bit of repeat here, though thankfully these remixes are different enough to make the song feel fresh. There is a great mixture of rock, metal, pop, jazz, and even a light and fluffy Junes theme to dance to and this creates an excellent soundtrack with something for everyone.

Overall
When it was first revealed that Atlus was working on a Persona 4 rhythm game many doubted that it would turn out great and it turns out that Atlus may have taken that as a challenge since Persona 4: Dancing All Night is an excellent rhythm game featuring an amazing soundtrack, a decently enjoyable storyline, and great looking visuals that you can sink hours into at a time if you wish or simply play through one song whenever you feel like as you continue to dig into the numerous unlockables available in a game with surprising depth that Persona fans should adore.