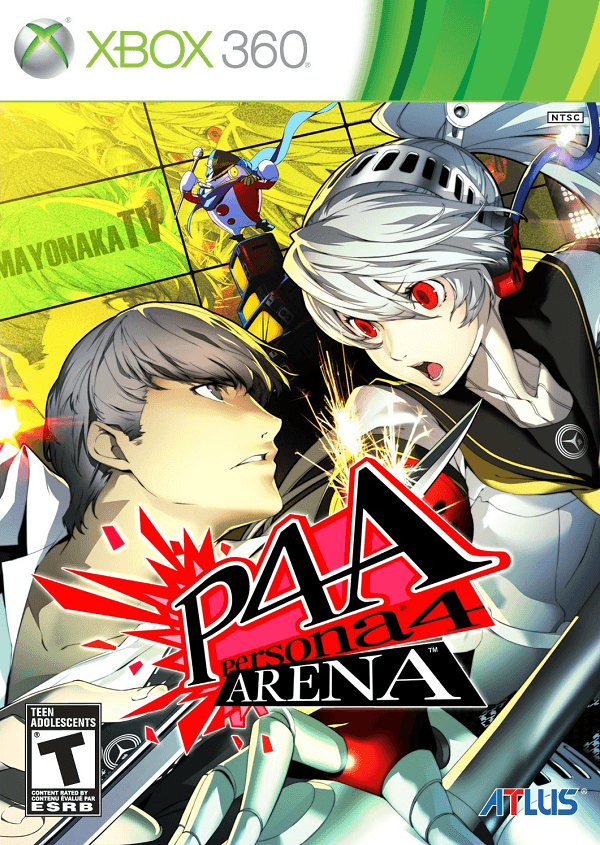 Overview:
If you asked a fan of the Persona series what they thought the next entry in the franchise would have been about, they may have guessed another RPG, or maybe another anime spin-off of some sort. One thing that most likely no Persona fan would have guessed would be the fact that the next Persona product out of Atlus would actually be a Persona fighting game featuring the cast of Persona 4 as well as members of Persona 3. Now that this fighting game has hit stores in North America, does this unexpected title earn the Persona name?

Story:
It is a sad thing in fighting genre today that more often than not, this little section of the review would usually either be non-existent or barely worth mentioning. However with Persona 4 Arena, we not only see a full-fledged story mode but one that is actually quite lengthy and enjoyable, especially for fans of the Persona 4 series. 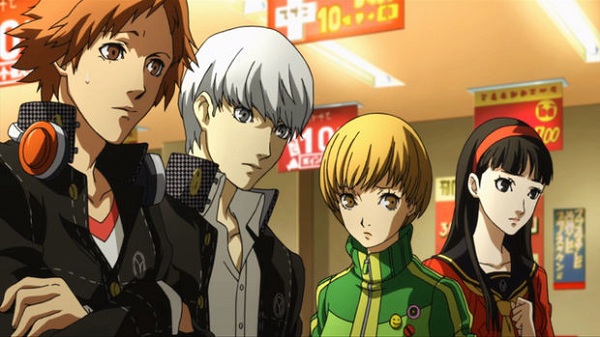 The story takes place two months after the events of Persona 4 and the Investigation Team has settled back down into a mostly normal life, with the main character from Persona 4, Yu Narukami, living in another city. However this group of high schoolers who grew close during the events of Persona 4 planned to meet up during their Golden Week holiday off of school to reminisce and spend time with one another again.

However, the day before they get together, the characters begin hearing rumors about the Midnight Channel starting back up. After checking out the rumors, the team quickly discovers that the Midnight Channel has indeed returned and this time around it is showing an advertisement for a fighting tournament called the “P-1 Grand Prix.” To make matters worse, not only does this ad show the members of the team fighting one another, but after further investigation they discover some of their friends have already gone missing.

In an effort to save their friends and put a stop to this new Midnight Channel, the Investigation Team once again enter the TV world to figure out what is happening. Inside the team will encounter not only past characters from Persona 3 but also a new fighter woman named Labrys. It is worth noting that Labrys and Persona 3’s characters are actually rather tightly knit when it comes to story development, which will be great for those who played Persona 3, though those only familiar with Persona 4 may be a little in the dark. 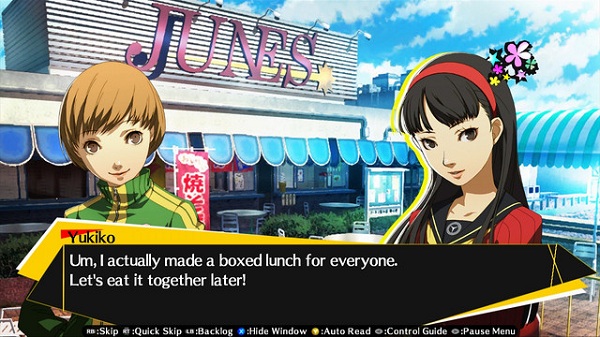 As for the story mode itself, the system is designed very similar to what players were presented in Arc System Works’ other popular fighting game, BlazBlue. The player will have to select one character at a time and then follow their story events as they unfold from the selected character’s viewpoint, with more playable storylines unlocked upon initial character completion. Along the way players will encounter a number of one-round, usually easy to win, battles though these fights are often few and far between the actual story itself.

The story is told in a visual novel style which means that at times there will be plenty of text to read and listen to. With only a few battles actually occurring within each character’s story this means that most of the storyline is presented with simple dialogue, though this seems rather standard considering at its heart Persona is still a story driven game. As such players will find themselves right at home with the long story sections in-between fights as Persona 4 Arena offers a storyline more compelling than most standard action games to date.

Unfortunately Persona 4 Arena does have a small issue which could become a glaring problem for some people. As mentioned earlier, while Persona fans will become enraptured learning more about what happened to their favorite characters and seeing them once again, those who haven’t played any Persona games are coming into a storyline that isn’t familiar to them. Only a minimal effort is given to explain why each character is in their current situation or even what the Midnight Channel is, so anyone invested in trying out Persona 4 Arena’s story mode should be well versed in at least Persona 4 for maximum enjoyment. 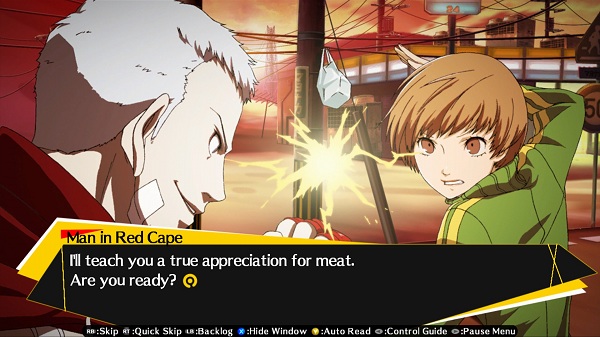 Despite this, as a standalone product Persona 4 Arena’s story goes above and beyond the call of duty for a fighting game by offering legitimate progression and even some character development, something practically unheard of in the fighting genre. All this makes Persona 4 Arena’s story one of the biggest draws of the title as it offers hours of game time without even touching the title’s multiplayer modes.

Visuals:
When Persona 4 Arena was being developed, the animators must have quite literally went into overtime when they began creating the game. Practically everything within the title is of the best quality possible. The menus themselves and pre-fight introductions never get old while the story cutscenes, background art and character portraits (although lip-synch is practically non-existent) are like eye-candy with how stunning they appear. 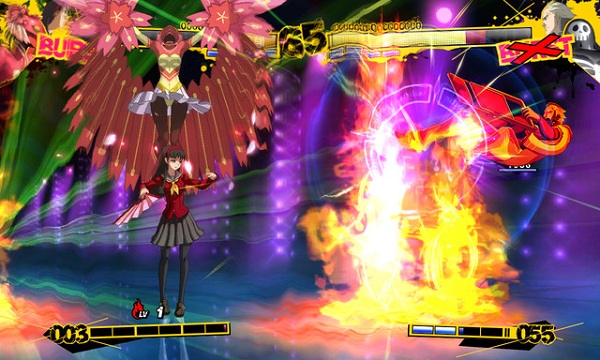 The fights themselves feature highly detailed 2D sprites that are duking it out with one another featuring brightly colored and flashy moves that can take up the whole screen. Everything about Persona 4 Arena’s presentation is polished practically to perfection, making it one of the best looking fighting games to date.

Audio:
For the purists out there, you have no reason to be concerned as Persona 4 Arena does feature both the Japanese and English dub, so those who prefer that option do have the ability to listen to it. As for the English cast most of the cast has returned to voice their characters, though a couple have changed since Persona 4. The voice actors provide perfect dialogue work which is great considering the game’s lengthy story mode.

Gameplay:
Outside of the fleshed out story mode mentioned above, Persona 4 Arena has a number of other gameplay modes to keep players entertained. For a more condensed and lackluster story presentation players can jump into an Arcade Mode with each character. Players can also take on friends/computers in a Versus mode battle, attempt to set a high score in the absolutely brutal Score Attack Mode (always set to extremely high difficulty), attempt to work out 30 complex combo attacks for each character in Challenge Mode or even take the fight online. 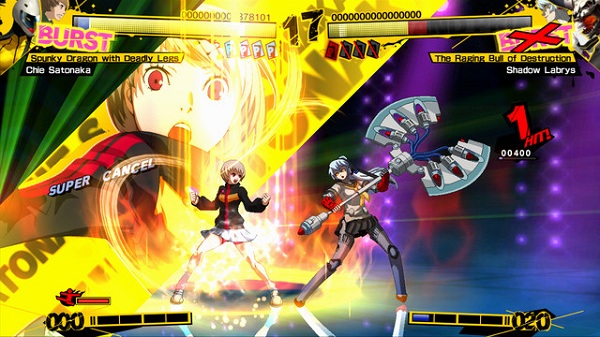 Once the player actually chooses a mode to play, there are a moderate amount of fighters to choose from, though each and every one of them handles differently with completely different fighting styles and moves. Close up fighters may find Chie to their liking while ranged fighters could find themselves using Yukiko or Aigis instead. There is even an oddball character with strange moves in the form of Teddie, providing multiple options for the picky fighter.

Once the player enters into a battle with their chosen character, there are really only four attack buttons that the player will need to be concerned about, though these buttons also happen to control two characters. Two of the four buttons control the selected character’s attacks with weak and strong hits, while the other two control the selected character’s Persona attacks. This creates a small tag fighting mechanic that allows players to combine their character and Persona’s attacks into a powerful multi-hit combo. It is worth noting that Personas can actually be temporarily broken and made unusable for a small time, as they feature a four card HP bar that is dropped by one each time they are hit. 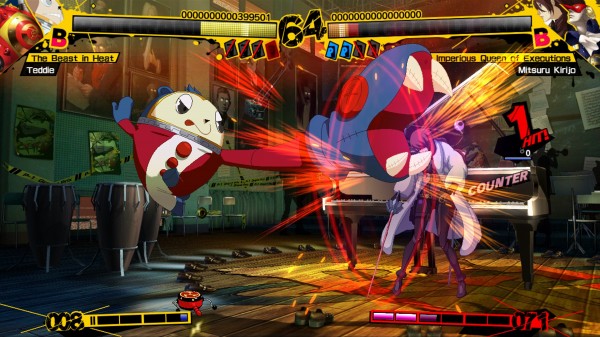 While the basis of Persona 4 Arena’s fighting is rather simple to understand, there are a number of more complicated tactics and mechanics to understand to truly master the title. These things include instant blocks, air-recoveries, all-out attacks, an Awakened state which provides more skill points for powerful attacks and even status ailments like poison, paralysis or fear which will limit player’s actions or cause other issues similar to what they would do in the RPG.

As standard with a fighting game, every member of Persona 4 Arena’s cast has their own special moves which mostly draw from the aforementioned Skill Point bar which fills up whenever the player deals or receives damage, there is even a finishing blow styled skill which provides a flashy finish to an already almost won battle. These special moves are actually rather simplistic to pull off with only minor stick twirling and button pressing. This makes special moves very simple for newcomers to understand and get used to while also offering more advanced fighters a chance to combine these flashy moves into complicated attacks. 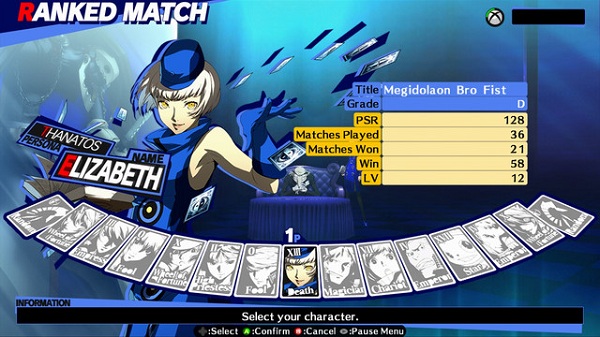 Mastering some of these complicated attacks can certainly help a player once they enter Persona 4 Arena’s Online Mode. As one may expect, players can fight in ranked matches or simple player matches and thankfully the title’s netcode seems to work nearly flawlessly with fast match finding and barely any actual lag in the fights themselves. It is also worth noting that players can even set up their own title to be shown off to others online while they fight, giving players a small chance to create an online identity.

Overall:
Persona 4 Arena is something that no one was expecting would come out of Atlus or Arc System Works but the finished product is one of the best fighting games that I have played to date. With a highly accessible control scheme and a deep story mode to draw them in, this fighting title provides a Persona fan with everything they could ask for.

As for non-fans of the series the tight fighting mechanics and varied roster will offer plenty of options for those simply coming for the fighting itself. Featuring an easy to learn but difficult to master system, fighting fans will find themselves entranced as they take their battles online in this beautifully presented game. Ultimately, Persona 4 Arena may not be what fans expected, but it is certainly a stand-out example of an amazing fighting game that will please both the fighting community and Persona fans.