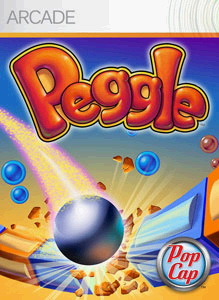 As a newcomer to the world of Peggle, I was unsure of what to expect from the Xbox Live Arcade rendition of a game released on many different formats beforehand. I had seen screenshots, I just couldn’t quite make out what exactly was the motive of the game. I have to say, now I’ve actually played it  and have an understanding of how to play, it has revealed itself to be a good little puzzler. 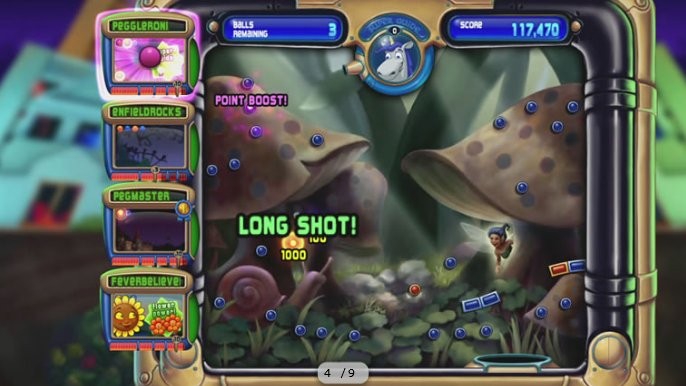 The game offers 3 modes for single-player play; Adventure, Quick Play, and Challenge. Then there is also the Multiplater modes. There is local multiplayer for two players, in the form of a ‘Duel’, as well as online multiplayer for up to four players as a ‘Peg Party’ or ‘Duel’. In Adventure mode, you play through a short and highly accessible campaign in which you are introduced to all ten quirky characters in a calm tutorial style manner. It is fairly easy to complete and clearing all 55 levels shouldn’t take you any more than 4 hours, with little difficulty faced. The modes that follow, all use these same levels, including multiplayer. The lack of a huge number of maps to play can lead to you growing weary of some maps, as you repeatedly replay the same levels, until you reach the stage where you feel you know them like the back of your hand.

Quick Play as the name suggests, gives the option of swiftly selecting a level of your choice and jumping in for some instant action, something this puzzler is ideal for with the short duration of the rounds. The Challenge mode offers an increase in difficulty from Although, although still with the same set of levels, therefore, providing only an ever so slightly varied experience. Furthermore, Multiplayer uses these same levels too, and despite others clearing the level at the same time as you, albeit in a turn-based fashion, it still feels familiar due to the fact the same levels are used. 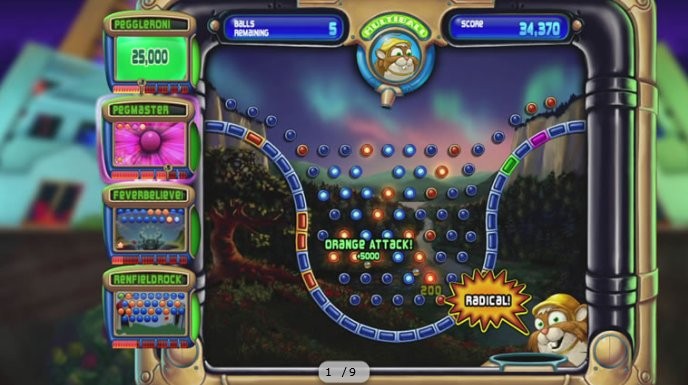 The graphics in Peggle are fairly basic, mainly because it is a simple puzzle game and flashy graphics aren’t needed. However, that doesn’t mean the graphics are not well polished. They feel clean-cut, neat and tidy. The game is also full of colour and the bright characters are cleverly designed, brimming with personality visually, as well as through an amusing script.

Peggle boasts addictive, and highly accessible gameplay- the simplicity of the game makes it possible for people of all ages to play, and not only that, but it will keep you coming back for more, whether it be to beat your top score, or simply to progress with the single-player challenges. The different abilities, unlocked for a short time by hitting a green peg, make for an interesting and enjoyable change in gameplay. In total there are 10 unique power-ups: one for each character. There is a large range of power-ups, from a destuctive fireball, to an almighty ‘Zenball’, which automatically guides itself to the best possible shot that can be achieved around the area you are aimed.

I was highly impressed with the audio features of Peggle. As soon as you start the game up, you are greeted by sounds as you scroll down the main menu, which whilst subtle, contributes to the peaceful and relaxing nature of the title. Peggle’s music is well executed in-game too. The background music plays quietly adding to the experience whilst avoiding being too overpowering, a hurdle at which many other puzzlers have fallen, along with their irritating music.

Overall, Peggle is a solid offering from PopCap Games, with well polished and highly addictive gameplay. The fact that it’s a puzzle game allows for maximum replayability trying to better your scores, although you may have to resort to this fairly sharply, as it only takes a short time for you to be accustomed to the meagre 55 levels on offer. I would have loved to have given a higher score to this game, if only the title offered a greater number of levels to play on for even more entertainment.

My score for Peggle on Xbox Live Arcade is: