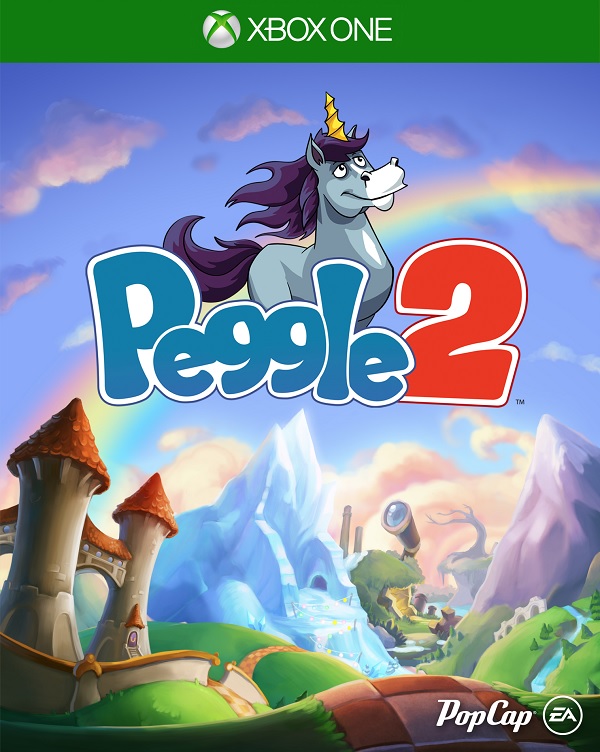 Overview
Sometimes the simplest games can be the most enjoyable. When Peggle was released it featured a rather simplistic concept that quickly took the world by storm with its colorful cartoonish appearance and basic mechanics that attracted the masses. Despite seeming like an odd choice for a next-gen console, Peggle 2 has landed on the Xbox One. Being the first numbered Peggle title since 2007, does Peggle 2 still have the same charm of the original?

Gameplay
Peggle was a simple game that anyone could pick up and play thanks to some easy to understand and addicting mechanics. Peggle 2 is the same in many regards. Players are given control of a little cannon on the top of the screen that they can aim and their objective is to remove every single orange peg from the board which is littered mostly with blue pegs, bonus score giving purple pegs, and special ability providing green pegs. 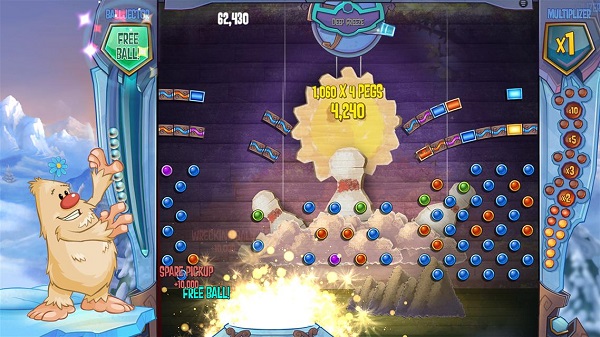 They are given a certain number of balls to start with, but if a ball lands in a constantly moving bucket at the bottom of the screen, or gain a high amount of points from a single shot they are given a free ball.  There are a few new additions to the basic pegs now with the inclusions of bumper pegs that will send a ball bouncing away if they hit it and armored pegs that take two hits to remove from the board.

Aiming is a simple matter of using the analog stick for fast movement, the D-pad for slower movement, and moving while holding RT for slow fine-tuning. Those unfamiliar with the game may wonder why a title with an objective as simple as eliminating orange pegs requires fine tuning and the reason for that is because the game can be incredibly addicting and a lot of the fun comes from  trying to rack up as high of a score as possible while also performing various trick shots. 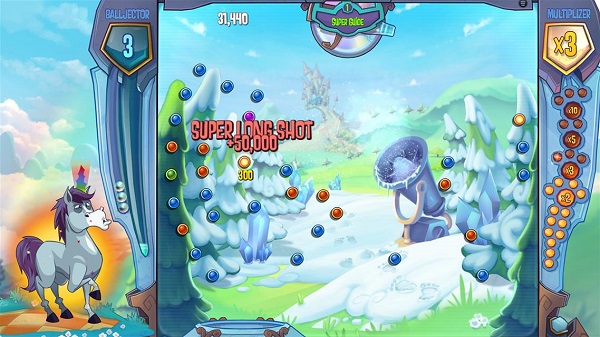 Many types of shots are considered trick shots, such as long bounces between pegs, eliminating a peg by bouncing off a wall or the bucket, and much more. These type of skill shots, as well as shooting to eliminate a large number of pegs at any given time, require a lot of skill and aiming is essential at these moments. Since one of the special goals in every level is to earn an “Ace Score,” which simply means a high score, this sets an extra challenging goal for those who are looking to conquer everything Peggle 2 has to offer. Other challenges include clearing every peg from the board and a third objective that varies from stage to stage.

Peggle 2 offers one hundred and twenty stages, half of which consist of standard levels while the other half are challenge levels that the player can choose to tackle if they so wish. In these various stages players will encounter a familiar Master as well as a handful of new Peggle Masters. For those who are unfamiliar with the title, these Masters each possess a special ability that can be used to help the player clear a stage. Except for a familiar unicorn named Bjorn, there are four new Masters in Peggle 2 and each of them is as charming as the next. 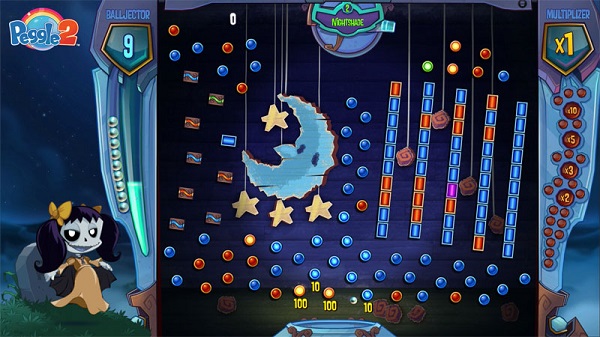 While Bjorn comes with a familiar and helpful power called “super guide” which shows the exact trajectory of a ball for three shots, the other Masters provide a set of new abilities that include throwing a peg destroying boulder out of the cannon, freezing the board so pegs bounce around and eliminate each other, lightning that eliminates pegs in a certain area, and a fun ability that makes every blue peg on the field intangible, allowing the player to shoot through them to hit difficult orange pegs.

At first these Masters can only be used on their specific stages but it is possible to return to old stages and use any Master that has been unlocked and while Bjorn is a useful Master for learning the physics of the game and aiming for trick shots, Luna, the Master with the ghost ability, is easily the most useful as she also restores blue pegs to the field allowing for higher score counts. 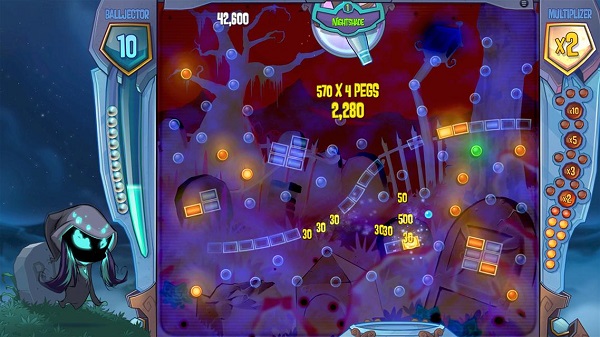 Outside of the single player mode of clearing pegs for high scores, there is also a multiplayer option. Sadly at the moment there is no local multiplayer which is a disappointment to say the least but there is online multiplayer. Online there can be four players in a lobby with players taking turns to earn more points than their fellow competitors with the person earning the most points winning. The game does have a tendency to place players in already started matches however which places them at a disadvantage in points.

It is also worth noting that Peggle 2 takes advantage of the Game DVR system to an almost annoying degree. While it is nice that any shot that earns a certain amount of points is recorded, it also means that there can be times that one stage will see as many as three game clips recorded at a time, absolutely flooding the player with recorded clips.

Visuals
Peggle 2 may not be a demanding game as far as graphics go, but it is a colorful and crisp title that looks wonderful on the Xbox One. The title features nicely detailed backgrounds that have animations of their own and every single board looks unique with their pegs usually arranged to match the background. 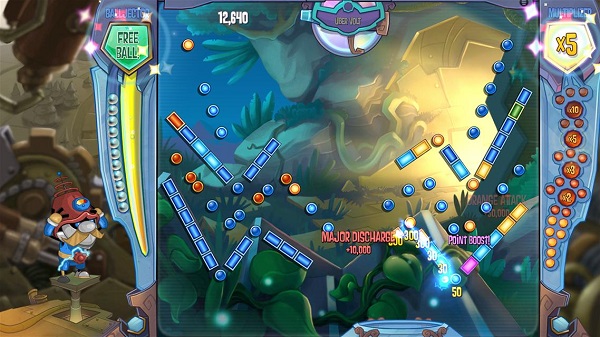 Now earlier I mentioned the five Masters in the game. In the original Peggle they were simply basic images but in this one they have been given a rather stellar upgrade. Every Master now sits in the bottom left corner of the screen and will react to the events that are happening on the stage. This means they will look concerned if the player is running low on balls, anxious if they are about to win, pleased if they do well, and a lot more. They even react when their special powers are activated or the player is in Extreme Fever mode as they celebrate your completion. This adds a nice level of character to the game and makes it even more charming than before.

Audio
The background music throughout Peggle 2 provides a nice calming effect and one thing that has been added to this version of the game is a difference in sound effects between stages. Hitting pegs in one stage can sound different from hitting pegs in another stage and even the song that plays when every orange peg has been eliminated changes between Masters, providing some nice variety between stages.

Overall
Peggle 2 doesn’t push the envelope nor does it do too much to change itself up from the original game, but considering how popular the original was, that might be a good thing for people. Peggle 2 feels more charming and colorful than ever before thanks to the inclusion and new implementation of the Masters and many gamers will find it hard to pull themselves away from this fun and addicting title.