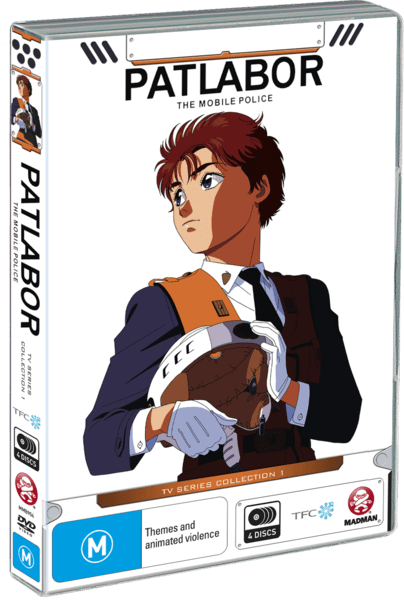 Overview
Crime is a constant. No matter how society advances, reprobates are sure to follow suit and bend technology to their own twisted whims. It is on this premise that Patlabor rests. In a world where giant robots are commonplace, there is only way for peace to prosper: Fight fire with fire. 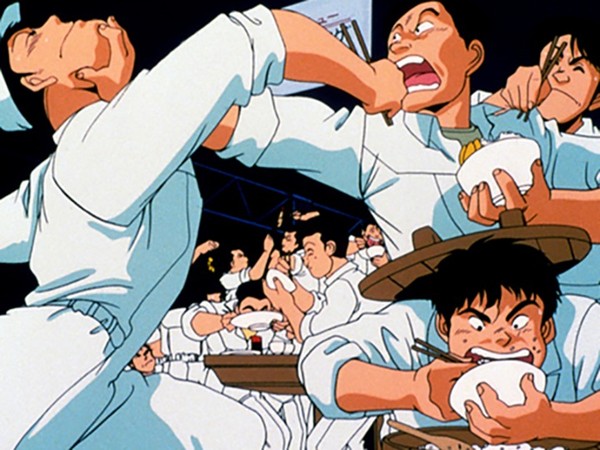 Story
It’s the not to distant future. Life here is pretty much the same as it ever was. You know, apart from the giant robots. In a society built upon industry, it’s only natural for technology to advance in leaps and bounds. Ergo, robots. Known as Labors, these machines perform all manor of heavy duty work, from  construction, to demolition, or even deep sea salvage. However, with humanity being what it is, there are those who have instead decide to utilise the Labor as a tool for crime. The dastards. With the emergence of this new criminal threat, specialised Patrol Labors (Patlabors) were created in an attempt to normalise society once more. Enter the Second Special Vehicles Division (SV2), a group of policeman who utilise said Patlabors in the neverending quest for justice.

Meet Noa Izumi, a young police cadet who dreams of piloting a Patlabor of her very own. On the way to the Patrol Labor Aptitude Test that will aid her in realising her dream, Noa witnesses SV2’s newest machine, the AV-98 Ingram, being pilfered by thieves. She immediately leaps into action and, after accidentally destroying two police vehicles, manages to rescue and pilot the Patlabor for a short time, during which she dubs the unit Alphonse. With her aptitude proven, Noa is accepted into SV2 as a pilot for the Ingram. 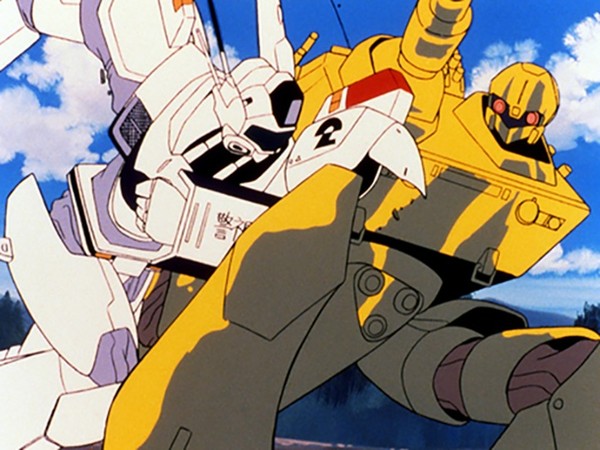 Sometimes the simplest approach is best

Though her dream came true and she now possess her very own Labor, Noa is somewhat shocked by the daily life of her new division. Essentially a backup force, SV2 is seen as somewhat of a joke within the police. Chock full of strong anime personalities, this ragtag bunch of officers tend to receive the assignments that nobody else wants. It is also due to this status that the division is often on standby, forced to pass their days with various mundane activities, such as farming and fishing for food. Not exactly prime time action, but a job is a job. It is this concept that leads the anime to follow a crisis of the week format. However, what constitutes as a crisis isn’t exactly spelled out clearly. Though SV2 may spend one episode aiding in a dangerous fire rescue, the next episode will have them investigate evidence of a demonic curse plaguing a forest village. Consistency is not exactly a core element of the series. It is later revealed that, in addition to receiving the “garbage assignments” because of their status, a number of their missions are in fact publicity stunts devised to help alter the public’s perception of SV2…It doesn’t work out too well.

As the series progresses, Noa’s affinity for the Labors proves to be somewhat of a barrier for her police work. As she cares so deeply for the machines, she will often try to avoid damaging her foes too severely. As you’d expect, this leads to some friction with her superiors who are forced to deal with her mistakes. Her personality also starkly contrasts her co-worker Kanuka Clancy, whose employs a by-the-books, no nonsense approach to her job. It is this approach that often draws ire from SV2’s second Ingram pilot Isao Ohta, who believes himself to possess more skill than he actually has. This often leads to a great deal of property destruction and serves as one of the main factors in SV2’s position as an embarrassment to the force. 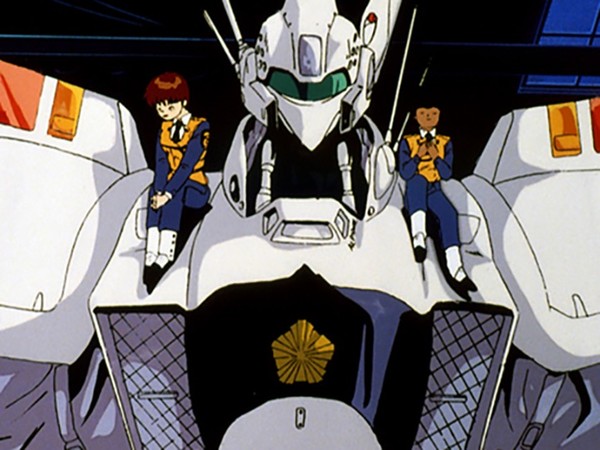 Justice is a difficult burden to shoulder

Visuals
As a series based upon the existence of giant robots, a degree of detail was placed into their various designs. With the Patlabors drawing the most screentime, they are understandably the most humanoid in appearance. A visual cue to aid in personalising them to an extent, both within the series and without. Hence Noa’s Ingram being dubbed Alphonse. In essence, they appear less as tools of industry and more like giant metal police officers, a fact aided by the inclusion of traditional weaponry such as a revolver. In contrast, other Labors take on a far more practical design, owing to their specific purposes. This also helps to dehumanise enemies, following the precedent that they use Labors as tools and lack any connection to their machine. This fact alone serves as an immediate annunciation of a Labors allegiances and serves to keep episodes visually interesting.

As it originally aired in 1989, the series is understandably dated. Similar to other anime of the time, Patlabor lacks a certain amount of detail in some of its visual elements. This is most prevalent in the overall weak definition of shadow. Though present to a degree, enhanced shading would definitely add an element of depth that is sorely missing. However, given the animes age, your perception of this will be heavily mired in nostalgia.

Also due to its time of creation, the series utilises a few classic animation shortcuts. To create a sense of movement without too much effort, a static image will simply slide across a background. A similar effect is created through use of a sweeping shot of a single image, which is supported by… 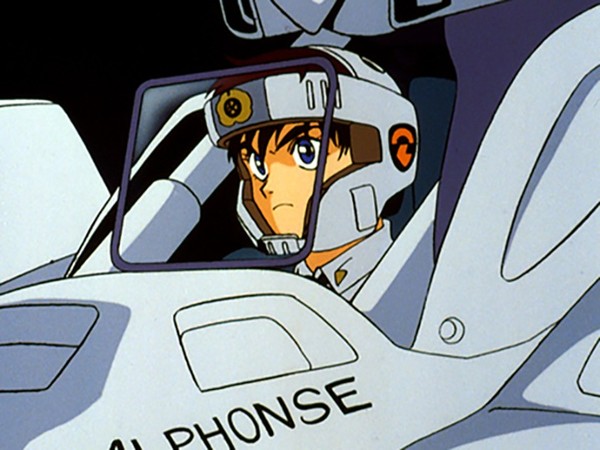 I sure hope that glass is bulletproof…

Audio
During these moments of reduced animation, specific audio cues are utilised to enhance the illusion of movement. This typically manifests through simple “whooshing” sounds combined with those of straining mechanics.

The most notable feature of the audio portion of Patlabor would have to be the English dub, and not for inherently positive reasons. Overall the dub seems very forced, making it very obvious that it is simply actors reading dialogue. Any moment of emotional intensity is met with only a minor increase in volume, creating some rather cringe worthy exchanges. Most likely due to translation and synching issues, there will also often be awkwardly long pauses between dialogue. Honestly, it’s quite jarring and really takes away from any given situation. The dub also often employs the use of voices which are quite frankly ridiculous. Whether an attempt to add humour, or simply express variation in a small cast, they’re definitely a negative element. That being said, the deadpan demeanour of SV2 Captain Goto is actually pretty funny. Definitely the highlight of the entire dub.

There is also a rather obvious lack of ambient sound throughout a majority of the series. Though musical accompaniment will kick in during the more dramatic or humorous moments, the rest of the series carries a strange air of emptiness. The focus on direct sounds, such as footsteps, serves to almost limit the world. Making it feels as if nothing of consequence is occurring anywhere else in the world of Patlabor.

Extras
Not too focused on additional features, the Patlabor only includes your standard anime trailers as its included extras. 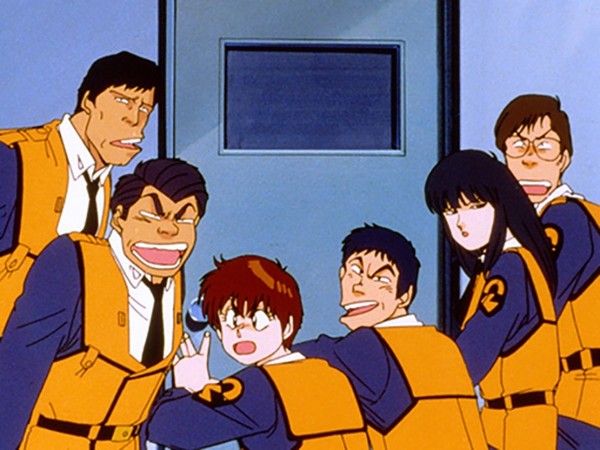 The faces of Japan’s less-than-finest

Overall
Patlabor: The Mobile Police is definitely dated. Heck, that tagline reads “This story is fiction…but in 10 years, who knows?” Keep in mind that the original airdate was back in 1989. Now whether this makes the series classic or simply old is purely up to personal opinion. The animation is pretty sluggish, the dub is fairly weak and the characters are presented as rather flat. Essentially it boils down to: interesting concept, average execution. That being said, if you can view it through the eyes of an anime fan circa 1989, you’re sure to see its charm.