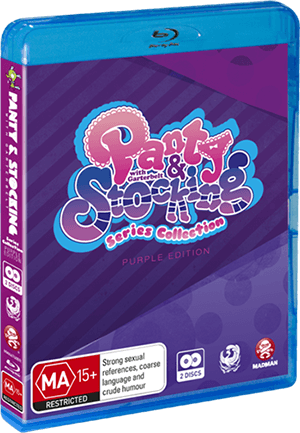 Overview
Do you ever notice how sterile most anime feel? Sure we have grown accustomed to the boundless harem and ecchi that’s featured in every season, but it’s all done in a “clean” fashion as the girls are almost always pure maidens at heart. Even the perverted ones have at least some traits deemed as desirable in society. Enter Panty & Stocking, a show with no holds barred as it casts a light on the nastier side.

Here are two female leads with the most undesirable of attitudes mixed with doses of rampant sex, toilet humour and copious amounts of foul language. Wrapped in a uniquely Western art-style, Panty & Stocking grabbed the attention of viewers and raised a few eyebrows when it aired in 2010. So let’s see how it fares in its transition to home video with this feature-filled Purple Edition. 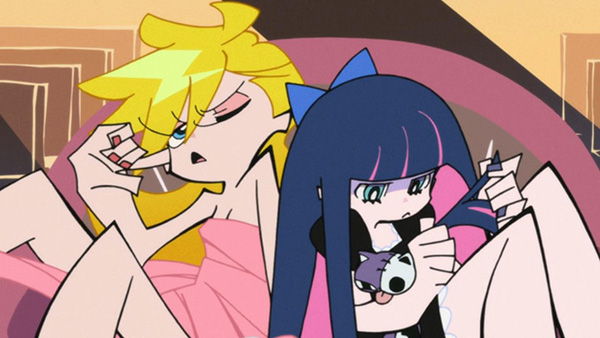 Story
The viewer gets thrown into the daily exploits of Panty and Stocking, the Anarchy Sisters, who happen to be two angels deported from above and forced to get rid of pesky ghosts in Daten City, a place between Heaven and Earth. That is, if their boss Garterbelt can get them off their lazy rear ends to do any work! Once they get into gear they do things a little differently. Panty removes her panties to materialise a pistol, while Stocking slides off her…stocking for a katana. Awesome? Yes. 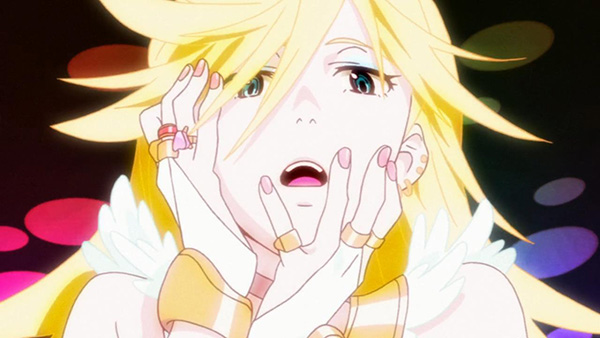 When they eliminate a ghost they’re rewarded by dropped Heaven Coins which, once enough are collected, can bring their halos back. Judging by their behaviour though, they seem pretty much beyond redemption. You’ll soon realise Panty & Stocking doesn’t hold back. Stocking eats sweets in the morning (shock, horror!) while Panty preys on men for sex in almost every episode. Faeces, farts, body fluids – everything. They somehow managed to fit every taboo topic you normally don’t find in anime. If you think it’s impossible to insert a lewd pun in every line for half an episode, think again. 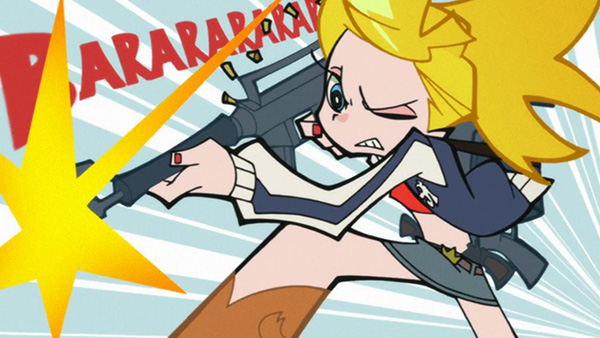 Panty & Stocking should be enjoyed for the antics and interaction between the two girls, as each ghost fight plays out as a pretty cool shonen-esque battle but they’re not intended as the highlight of each episode. Some can be bland, and fairly short, while others are exhilarating as a fight evolves on multiple stages. The dialogue and constant bickering between the two is a riot, though, and often precedes every villain encounter with hilarious results.

The dialogue is one of the strong points of the story here. Swear words and vocal etiquette aside, it’s very witty with play-on-words and crude humour abounds. 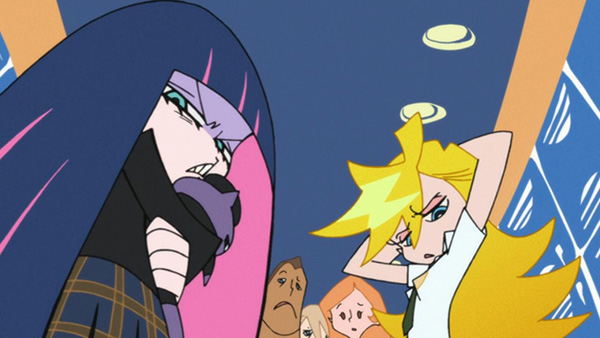 Visuals
The first thing you’ll notice, and will perhaps be confused about, is the animation style of Panty & Stocking. Borrowing from Western cartoon techniques in the vein of Powerpuff Girls, Panty & Stocking is almost a shocking departure from the usual anime we see. However it’s all done in a way that complements the abrasive and fun nature of the show. 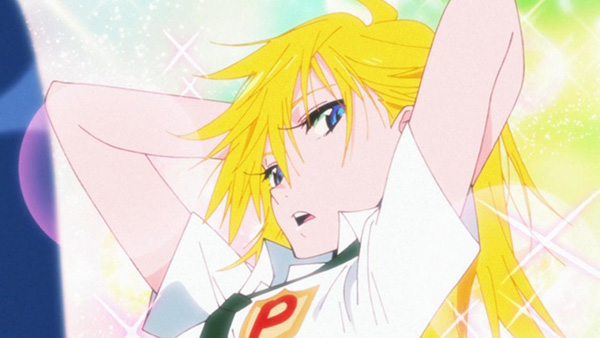 Backgrounds are simple yet creative and the two sisters are drawn in an often ugly way that puts more focus on their flaws. In an age where every anime does its best to make characters look pretty, such basic animation is pretty refreshing to see.

Things can get ridiculously awesome when fights and high-speed chases tear through your screen and you have no idea what’s going on anymore. It’s all a huge amount of fun if you go with the flow.

Audio
The sound design is also inspired by Western cartoons, with minimal ambient and background audio in order to bring the crazy dialogue into your face. The villains truly sound like maniacal after-school TV characters. 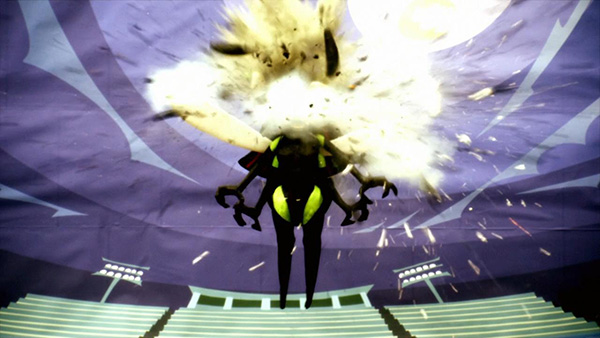 The music isn’t something you really notice in Panty & Stocking. You do get some funky beats, a pretty awesome transformation song and a pleasant ending theme, though. English dub fans will be glad to know this is a series that excels in our language, thanks in-part to the Western animation and the skilled voice actors. Those who prefer Japanese subtitles should give the dub a go, as it just feels so natural with Panty & Stocking.

Extras
Madman’s release of Panty & Stocking With Garterbelt happens to be the “Purple Edition”, brimming with plenty of on-disc extras. To break it down, we have: the Sanitary Box OVAs, Sit Down with Panty & Stocking, Ghost Explosion Collection and Documentary, Talk Live Animated At Loft/Plus One, Making of Lingerie Scene, Outtakes, Textless Songs and, finally, promotional videos and trailers. 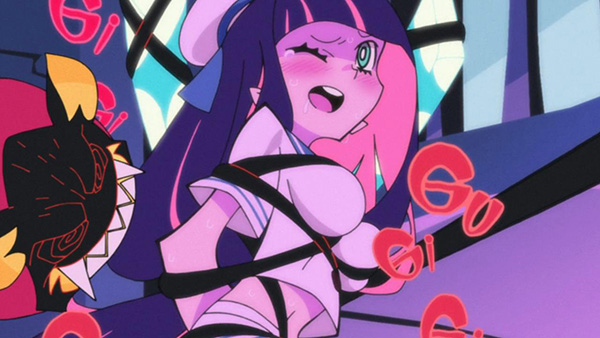 Phew! A few of these are really welcome, such as the OVAs which are animated shorts designed to be tacked on after each episode. If you’ve already seen and loved the show, it’s worth getting this set for the uncensored cut and all these extras alone! Other than that, it’s a two-disc release in a standard box typical of Madman’s releases.

Overall
Panty & Stocking isn’t for everyone, and it’s certainly not what I would normally watch. But if you’re itching for a wild, untamed and whacky anime this is definitely it. This is an anime for adults wanting a politically incorrect experience and should be applauded for having the guts to conquer the stereotypical “perverted” anime genre with its sheer obscenity.