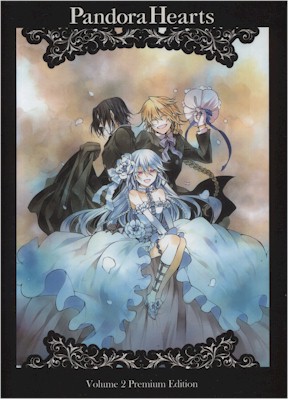 Overview:
Various anime have taken references from other media to help build themselves up. There is your usual source material of being created from a manga or a light novel but what if that source material featured heavy references to another source. Pandora Hearts the anime was created from the manga of the same name, but what is really interesting is the fact that they draw upon the world of Lewis Carroll’s Alice in Wonderland and Through the Looking Glass to base itself around. Now we’ve already seen episodes 1-13 and what they have to offer. How does Xebec Anime Studio and NIS America close out the story of Pandora Hearts in Volume 2?

Art:
Before I go into the artwork it is good to mention that, as with Volume 1, Xebec has used a film grain effect that will make some people believe that the production values are low, but in fact is a choice by the production company. Now this film grain can cause some people to not enjoy the way that the anime looks if they prefer a crisp image but in fact the film grain actually fits perfectly with the themes of the anime, especially during the fights that take place. Plus after watching a few minutes you will not even realize that there is a grain effect on the image. 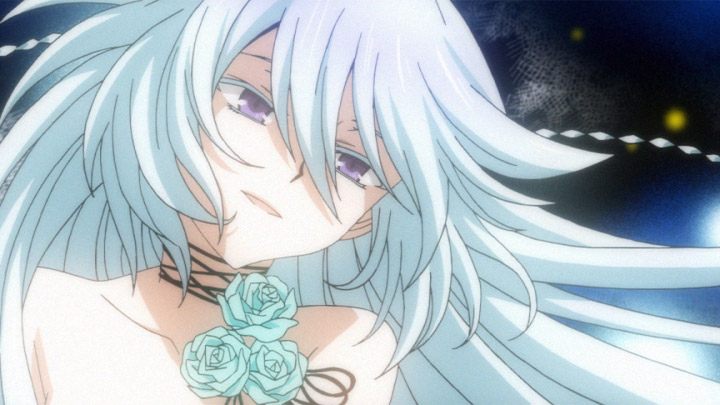 Once you look past the grain, you will find a well done, Victorian gothic styled environment. The character designs are well done and the environments that they explore, both the dimensions and the real world are animated well enough. As I said before in my previous review, the characters are designed with a more Victorian England style of clothing and have appearance relatively similar to that time period. Also I must say that the Will of the Abyss is one of the best looking characters in the anime itself, short of Alice of course.

Audio & Subtitles:
The spoken language for the anime is Japanese which means that watchers of the anime will be forced to read the subtitles, unless they know Japanese of course. This is either a good thing or a bad thing depending on whether or not you prefer English dubs or listening to the original Japanese voices. The Japanese voice work though is really well done and matches the characters perfectly.

Junko Minagawa provives the voice of Oz while Kosuke Toriumi provides the voice of Gil. Perhaps the best performances are done by Ayako Kawasumi as Alice and Kana Hanazawa as Sharon. These voice actors are perfect in their roles and will be pleasing to the ears, regardless of whether or not you know what they are saying without the subtitles.

As far as the musical aspect goes, Yuki Kajiura handles most if not all of the original sound track. The dramatic themes that she uses are very well done and can draw out the emotion of the scene perfectly. The songs themselves may sound familiar if you have heard her work before, but if it is your first time then you are in for a treat. The opening and ending music is suitable, but not worth much praise or notice on the other hand. 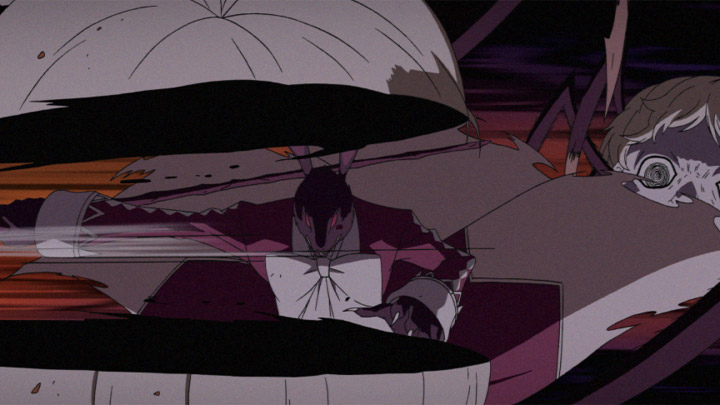 Now the subtitles themselves are white lettered and unobtrusive which is exactly what viewers are looking for in regards to subtitles. On most screens they will appear just under the black line of the widescreen viewing area which means that they will not be in the way of what is happening on the screen. I didn’t encounter any translation issues either from what I watched which is a plus.

Story:
The story picks up immediately starts where the last volume left off with Alice being captured by Cheshire Cat and Oz and Gil attempting to rescue her despite the fact that they will be at the mercy of the Cheshire Cat in his own dimension. Oz suffers the attacks of Cheshire cat continuously, both mentally and physically until he is saved by what is left of Jack Vessalius. Jack shows him the Tragedy of Sablier which began much of the mystery that the series holds within itself.

During the events of the Tragedy of Sablier Oz finds Alice murdered and this causes him to truly lose his mind and causes him to use the power of B. Rabbit through his contract to Alice and starts to destroy the Cheshire Cat’s dimension until Gil snaps him out of it by reminding him that the whole reason they came here was to save Alice.

After successfully saving Oz is completely engrossed in trying to find the truth behind the mystery of what happened at the Tragedy of Sablier. There are many different things which occur however that continues to delay his quest for finding the truth behind what happened, including the fact that the Citizens of Baskerville continue to pursue him and that the Will of the Abyss is continually hunting Alice to kill her once and for all. 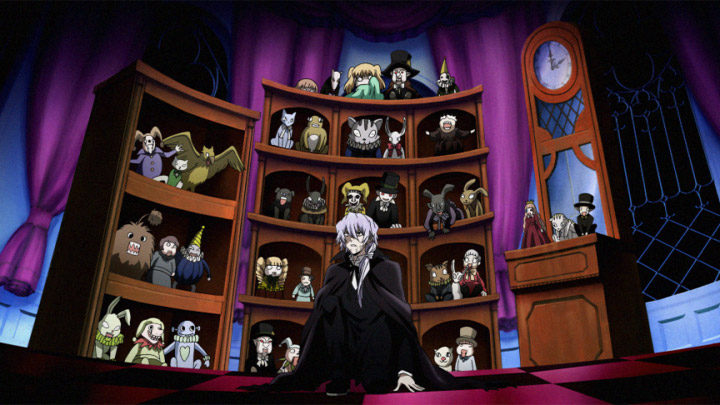 Those who have watched the first Volume will already know the depth of the mysteries and the plot twists that compound on top of one another as the story progresses. While these mysteries are intriguing, the best parts of the anime are the character interactions. The characters are some of the best that you can find in any anime and has plenty of character development. I can’t imagine how many times animes have introduced the characters of a story, only to leave it at that. Pandora Hearts looks into every characters’ past and delves into different facets of their personality.

Unfortunately, the story does have one downturn and that is in the ending. The manga that it is based off of is still continuing today in Japan, which means that the story has to have an anime original ending which leaves a lot of mysteries unanswered and can leave watchers wanting more or at least have some more questions answered for them. Despite all of this though, if you enjoy plot twists and character development then you will definitely find Pandora Hearts to be one of the best to fit that category.

Premium Edition:
As with Pandora Hearts Volume 1, Volume 2 comes in an oversized hard black box that has the Pandora Hearts title and Volume 2 Premium Edition on one side with white ivy designs on the top and bottom of the box, while the other side shows off a very impressive portrait of three characters from the anime. 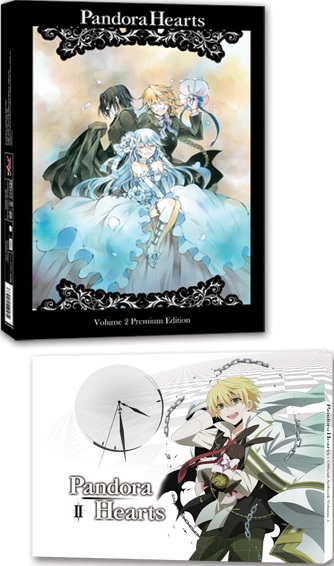 Rather than a more gothic styled portrait like Volume 1, Volume 2 has a portrait that shows the Will of the Abyss, a cat (name withheld), Jack and Gil in a very cheerful looking atmosphere, minus Gil of course.

The two slim DVDs that are included in the package feature Jack on one cover with Break on the other and with the first disc holding six episodes and the second disc holding six as well. Of course the best feature of the second disc is the fact that it contains all of the special omake (bonus scenes) that feature the main characters acting completely different than they would normally and are often very hilarious and show the funny side of most of the characters. Of the four omake included, I found 9th Time’s the Charm?! to be the best, but it will be up to you to find your favorite.

Perhaps the most interesting bonus that comes with the Premium Edition is the hardcover art book which reads right to left as if it were from Japan itself and features information on certain characters in the story and explains their backgrounds as well as provides a more detailed description of certain events in the story such as the Tragedy of Sablier. Personally I would recommend reading the explanations until after watching the show to avoid spoiling parts of the storyline. But after the character explanations are beautiful pieces of full colored art work which shows the characters in a number of different situations that are a sight to see. Also at the end is the second half of the Gilbert in Wonderland which takes a fun turn compared to Gil’s usual serious side. The small manga is a nice addition but people who haven’t read the first half from Volume 1 may be a bit confused about what is happening despite the short length.