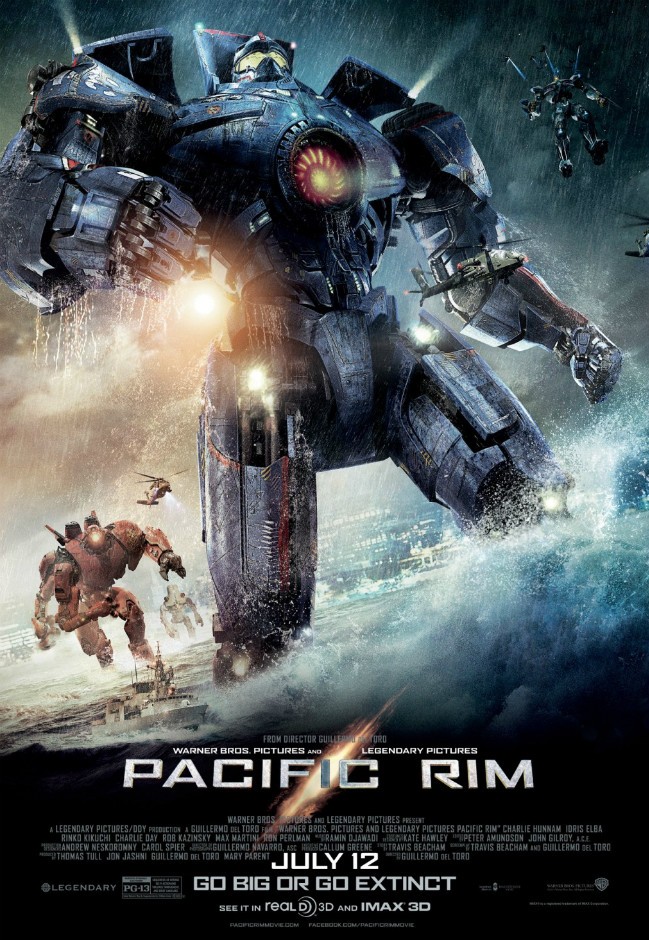 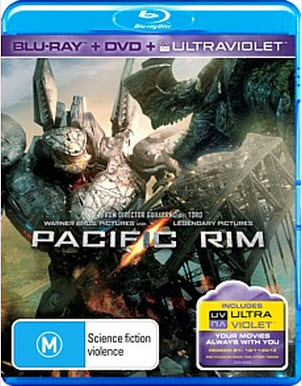 Pacific Rim is Guillermo Del Toro’s passion project; a love letter to both the classic Japanese Kaiju films – The Beast from 20,000 Fathoms and Godzilla being the forefathers of the genre, with respective creators Ray Harryhausen and Ishirō Honda dedicated to at the end of the film’s credits – and Gundam, which he – being a huge nerd and self-professed ‘otaku’ – is a big fan of. The basic premise needs no explanation and immediately sells to the male demographic: Robots vs Monsters. It’s what we loved in our childhoods and adolescence, and we still carry that childlike awe and sensibility with us, but does that automatically mean we would love the film?…

“We always thought alien life would come from the stars, but it came from deep beneath the sea. A portal between dimensions in the Pacific Ocean.” In the year 2013, Earth was besieged by this threat, known as the Kaiju (Japanese for ‘giant beasts’). The attack came suddenly and by surprise, with San Francisco first falling victim. Humans were eventually successful in felling the “Trespasser”, when after 6 days of standard military opposition, the U.S. government ordered the launch of 3 nuclear missiles, sacrificing the city of Oakland. After successive attacks, the nations of the pacific rim realised that they needed to put their own petty quarrels aside, pool resources and build a new weapon. 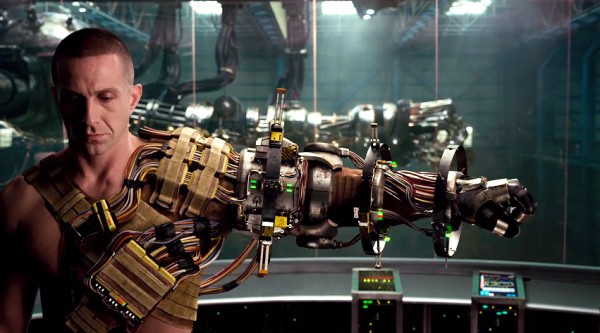 And hence, the Jaeger program was born. Each year from 2015 on, multiple 240+ feet tall monster destroying machines were built in production waves (Mark I-V). Initial tests proved the neural load of controlling the gargantuan robots too much for a singular pilot to handle. And so, a two-pilot operation was necessary, with each controlling one hemisphere of the “brain”. But first, the two pilots must share a connection and compatibility, entering a state known as the Drift, where they essentially mind-meld, see each other’s memories and…’get on the same wavelength’.

We join the personal story of Raleigh Beckett (Charlie Hunnam) and his older brother Yancy (Diego Klattenhoff) – co-pilots of America’s Mark III Jaeger, Gipsy Danger – as they are deployed to take down a Category III Kaiju, codenamed “Knifehead”, taking aim at Anchorage, Alaska in 2020. Unfortunately, the Kaiju lived up to its name and sliced through Gipsy Danger like a hot knife through butter, ripping its left arm off before killing Yancy. Raleigh proceeds to do what very few have in the past, piloting the Jaeger solo and finishing Knifehead off with repeated plasma cannon blasts to the face. 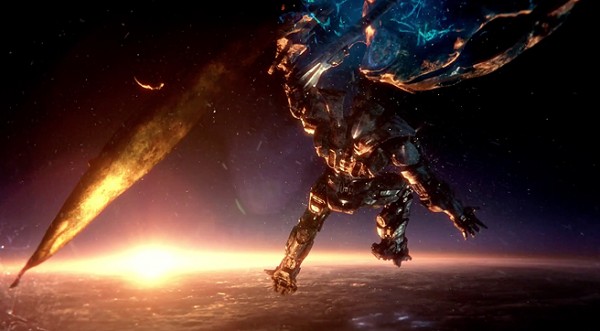 By 2025, the pacific rim governments decide to discontinue production on the Jaegers after the onslaught becomes too frequent for them to keep up with. Instead, they build a less time and resource-consuming wall…like that would ever work (some of the dumbest “logic” ever in a film). Everyone, including the retired Raleigh Beckett, knows that their time and lives are being wasted building this supposed barrier – their discordance being the extent of the political tension represented in the film. It’s at this point that Pan Pacific Defense Corps Marshall Stacker Pentecost (Idris Elba) contacts Raleigh, brings him to the Hong Kong “Shatterdome”, tells him of his new plan of attack and gets started on finding him a new partner.

Multiple important characters are introduced at the tail end of the first act/beginning of the second act, such as PPDC Ranger-in-training Mako Mori (Rinko Kikuchi), Dr. Newton Geiszler (Charlie Day) – who has a dangerous idea for how to communicate with their assailants – his competitive fellow Dr. Hermann Gottlieb (Burn Gorman), black market Kaiju-organ dealer Hannibal Chau (Ron Perlman) and more. Overall, the cast give great performances, although Charlie Hunnam’s strange British-gone-American accent sticks out like a sore thumb, especially when he pronounces the Japanese name “Mako”, the attempts at which are so bad it’s comical. 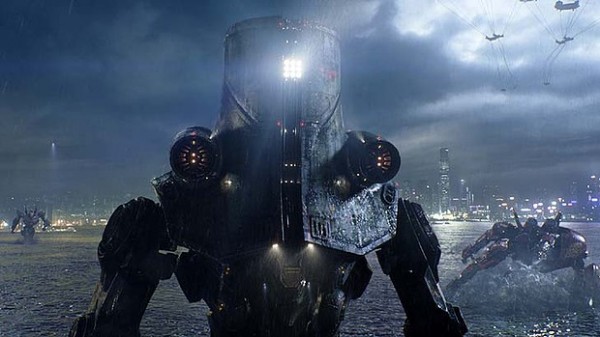 Relationships between characters are well-examined, and the carnage of the war is offset by small moments of comedic reprieve – e.g, the force of Gipsy Danger’s punch through an office building starting the swing of a Newton’s Cradle on a desk. That being said, tonally, this does create a small conflict, and maybe that’s why it didn’t quite click with me. Many things were also set-up for a sequel, such as – SPOILER ALERT – the possible consequences of ‘Drifting’ with a Kaiju, the impact of their ability to give birth and the all but uncharted territory of the Anteverse (the Kaiju’s dimension) – SPOLERS END – without the film feeling like that was its soul purpose (many would argue Prometheus is a prime example of this).

Pacific Rim has to be one of the more vivid, colour-rich films in recent times. From the settings to the lighting, vibrance and saturation is enhanced for a more stylised and bold look. There is never a dull visual on-screen, with even character design matching this outrageous colour language; Hannibal Chau for instance, dons a burgundy suit, bright red vest and yellow tie, not to mention his literally gold-plated shoes. Hong Kong is a nice alternate setting to the overused Tokyo, although it shares that neon aesthetic with its streets lit up by their bright glow.

The Jaegers and Kaiju all have very individual designs that are recognisable and give character. The Jaegers in particular represent their nation of origin by either adopting the colour scheme of their flags or taking on design elements based on their history, i.e., Japan’s Tacit Ronin painted in white with the red rising sun symbol, while Cherno Alpha may not reflect Russia’s flag, but its nuclear reactor-head and old, worn down exterior perfectly characterise it as distinctly Russian. And while, on the whole, they look great in-motion, in uncommon instances the visual effects can look quite sub-par (especially the Sydney scene as shown below). 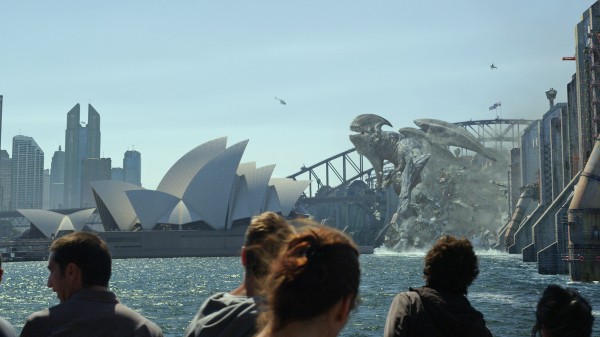 Bad CGI; luckily not common throughout

I wanted to make special mention of Robert Kazinsky and Max Martini’s work in portraying actually believable Australian accents! I thought that they were true-blue Aussies until I looked them up on IMDB to double check (I was aware of Kazinsky’s prior work, but he made me second-guess his nationality). Musically, Ramin Djawadi (Fright Night, Game of Thrones) does a good job in creating a unique hook with the musical motif of the main theme. That, coupled with the fact that the electric guitar is king here, and sounds cleaner than most implementations of the instrument in other films, created a unique sound that is owned by the movie.

Pacific Rim could have gone in many different directions, but Del Toro chose to focus on the most basic element of the film – the insane action. It’s exactly as advertised; these are your action-figures grown to the size of a skyscraper, beating the tar out of each other. Style expectedly overrules substance here, but that’s not to say that the groundwork hasn’t been laid for an exploration of the deeper themes that were planted, as a sequel was always in the plans. However, I just get the feeling that Del Toro wants this to be a franchise of pure fun and not much else, which is fine, but there is so much dramatic potential in the concept of ‘the Drift’.

Yet, if Del Toro’s reported idea of ‘merging a Kaiju and Jaeger’ for the next entry is any indication, drama/human story will continue to take a back seat to humour and ridiculous, over-the-top battles. This is the tone he went for and achieved, as it works to a substantial degree, but I can’t help but feel that Pacific Rim could have been so much more, which is strange because its initial appeal to me was the spectacle of enormous monstrosities duking it out. Don’t get me wrong, it’s still a good time at the movies, and those of you who want to shut off and enjoy a true popcorn feature will appreciate it for what it is.