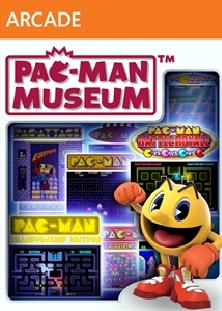 Overview
Pac-Man Museum is the latest collection from Namco to celebrate everyone’s favorite yellow dot-chomper, and has arrived digitally for a wide variety of consoles. Instead of throwing in random titles like Dig-Dug however, this ensemble is all about Pac-Man and his growth over the years. This means we have nine different titles (ten if you add the downloadable Ms. Pac-Man), all coming in at a nice entry price with some guaranteed nostalgia to be had. The question is, do these ports serve their purpose in quality, or is this just another case of “box them all together”? Let’s find out. 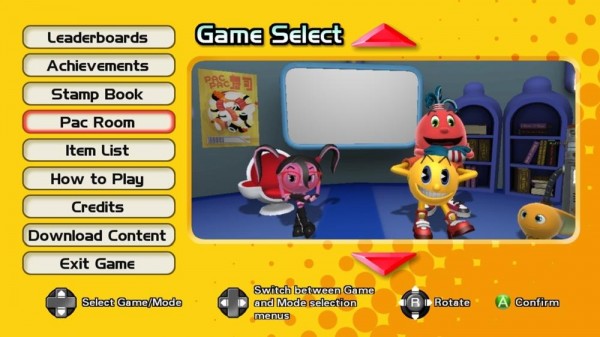 Gameplay
Obviously, the most stand-out title within Pac-Man Museum is the original. You chomp dots, bag ghosts, and gather fruits until the maze is clear, and that is basically it. You would think that this much loved port would at least feel a little aged by now, but I didn’t find that to be the case at all. All of the addictive and memorizing qualities stand strong in Pac-Man, which really shows us why this game has always been one one of the most iconic creations of all time in our industry. Then again, it also shows us that lightning never really struck twice for Namco, and the other titles on this collection – even the decent releases, give us an interesting retrospective on sequels that truly reflects where were, are, and going with the many brands we see today. 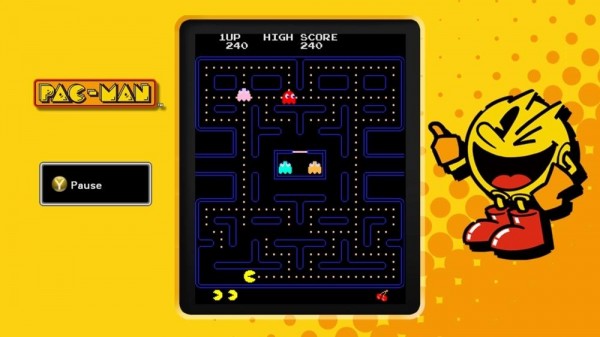 The follow-up that came a few years later dubbed Super Pac-Man is an interesting title, but one that never holds any weight as it is confusing as it is boring. Instead of gathering pellets, the goal now revolves around collecting keys. Once doors are unlocked, a large “super pellet” can be consumed to turn our round hero into a much large beast who is able to roll over ghosts. Sure, there are a lot of stages and the idea is unique, but this title doesn’t prove to be as inviting or as addictive of the original, which is why it is now one of the obscurities that has been packaged in due to name alone. Speaking of obscurity, Pac & Pal is also an odd entry. Never seeing a release in the west, this title allows Pac-Man to navigate a maze without pellets to flip cards that reveal fruit. It is kind of a match game, but with spit-able projectiles, with a green ghost by the name of “Pal” who stays out of the way but steals fruits if you don’t catch up to her in time.. Yeah, it sounds like an ideal concept on paper, but it never comes together as anything more than a mild, if not frustrating distraction. Also, I hate you “Pal”. 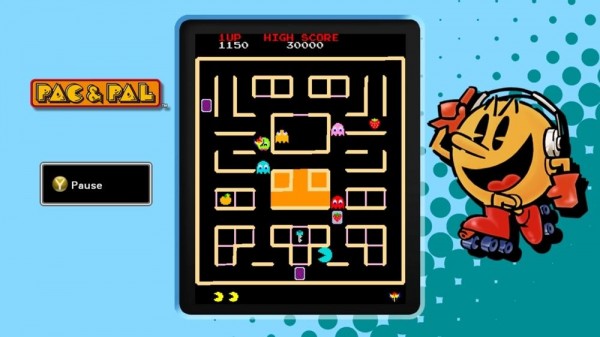 Since we’re going in chronological order here, Pac-Land is the next title up and is the first platformer featuring the man in yellow. Ghosts can be eaten with the appropriate pellet, special boots give Pac more bounce, and fruit serves to rack up bonus points on the fly. Yeah, it is your standard Pac-Man themed platformer, and one that doesn’t do a lot – but still comes off as entertaining due to the simple controls and familiar atmosphere. There are also a good number of secrets hidden within, so while I don’t imagine many will be playing the oddball out of this collection the most, it will definitely be one of the main areas where the most replay value is found outside of the original and Championship Edition. 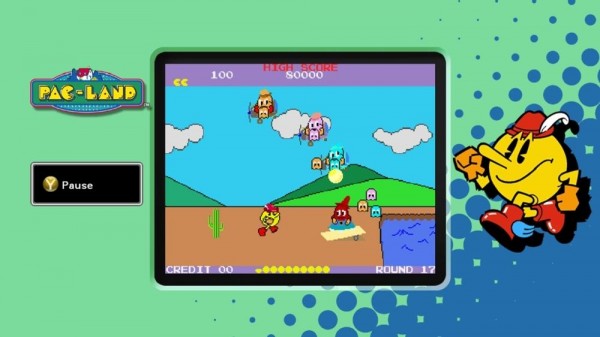 Pac-Mania in my opinion feels like the first reboot the series had as it goes back to the old formula of collecting dots while evading ghosts. Pac-Man can now jump over ghosts (which believe it or not is a game changer for the good) and the AI of the ghosts have been improved along with the quantity, adding a new challenge for players to sink their teeth into. This 3D reboot also features themed locations, which are pleasant to see and power-ups such as point and speed boosts to give the player a bit of an edge. Sure, its decent and at the time I’m sure it looked groundbreaking, but I still feel like this game captures the formula of the original, but doesn’t quite reach that golden pellet it was truly going for, and that is to be the title to truly redefine the franchise. 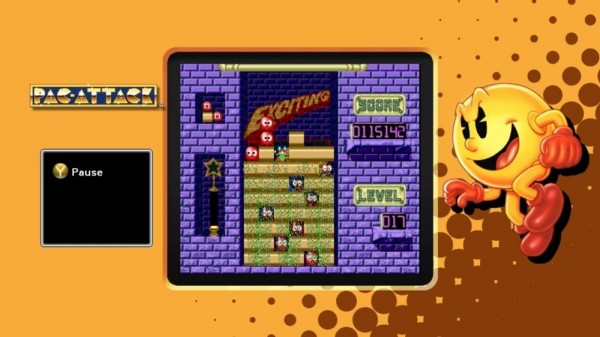 Pac-Attack is another odd title, as it seen a release on consoles and handhelds during the early 90’s, mainly due to the puzzler craze that was still running wild due to the successes of Puyo Pop and Tetris. Players have pieces they must assort at the bottom of the game board that come in combination with pellets. You must stack this pieces in the correct format, as Pac-Man will come attached after a few moves and run straight forward to gobble pellets and potentially clear the board. This title is going to be either a love it or hate it for most. On one hand, the multiplayer is fun and the mechanics are understandable, but on the other you have a game that just feels a bit lacking overall. I almost want to say I played Pac-Attack the most during my time with this collection, but I still don’t feel I appreciated the gameplay as it seemed a bit too luck based and can become tedious due to its design, even in this day in age where puzzlers are made up of thousands of unique ideas. 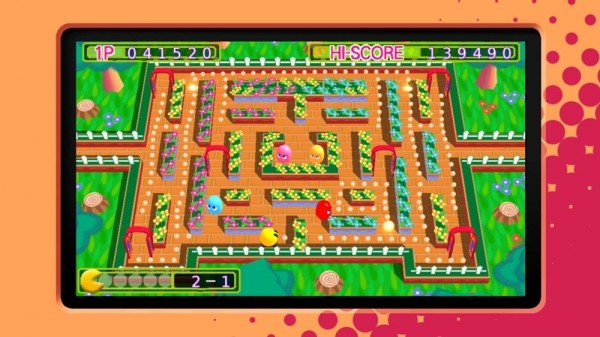 Pac-Man Arrangement is a lot like Pac-Mania, but adds in boss battles and other ideas to yet again revitalize the formula. Imagine a large ghost made up of a great deal of smaller ghosts, and the chaos of chasing down these said ghosts IF you can run fast enough to get to a super pellet. That is the true big addition within Arrangement, but small gameplay mechanics add in a little flavor to make it feel more distinct, such as dash and warp panels. Pac-Man Championship Edition needs no introduction as it in my opinion did what could never be done with this entire franchise. Due to addictive and lightning fast gameplay, new ideas, and all of that neon, Championship Edition makes a large statement about the age old formula that speaks volumes, proving that a new ideas plastered on an old formula can indeed work with the right gimmickry attached, and with the game once again revolving around score with its new coat of polish, it is no surprise we have seen this title re-released abundantly in just under seven years.

Pac-Man Battle Royale is new to us here in the console world and for most will be the reason to buy this collection due to its current exclusivity. The concept is to navigate the mazes with friends, where the player with the highest score is the victor. Sadly, while the multiplayer only title is a blast to play with friends, it comes with no online functionality. That isn’t a deal breaker due to how enjoyable this little romp is, but it is a bit head-scratching why this feature was not added in to an already modernized set-up.

Visuals
I won’t detail each title individually here, as that could take more time to read and the graphics flat out do not matter. The brightness however does, and that is where a few titles miss their mark. These are ports purely from the original incarnation, meaning if the title was not in HD then, it will not be now. I have no problem playing older titles with darker graphics at all, that is not the problem. The problem is that when you jump from playing a great looking game like Pac-Man or Championship Edition and then step into the world of something like Pac-Attack or Pac-Land, the visuals just look a bit dark and muddy. If these were stand-alone, it would be a bit different – but due to the fact that these are in a collection with other titles, it is a slight downer that we couldn’t see a little more effort put forth to sharpen those pixels up. The backgrounds however and menus that you can customize with your own unlockables look fantastic however, and you’re sure to be racking up achievements just to unlock another trophy that is always in display at the center of the experience. 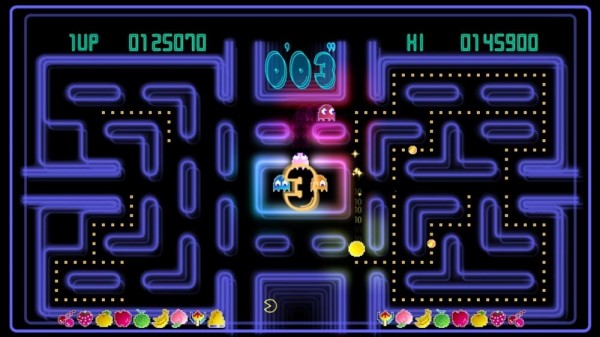 Audio
The audio is a different story entirely. Its hard to make the classic sound effects and tunes sound bad, and thankfully, this collection “scores” with its bubbly and legendary themes that infected arcades years ago. That famous “waka waka”, the intensity of the chase for a ghost, and everything in-between help bring the life out of this faceless mascot, making an experience that comes forth as familiar and welcome during any incarnation, good or bad. Sure, some of the tweaked and re-imagined titles in this collection are weaker in this area such as Pac-Attack, but there are more rainbows than dark clouds here in terms of audio, which are sure to leave the player humming Pac’s praises for days after a long session.

Overall
Pac-Man Museum isn’t the best collection you can find on consoles, but it may be the most important. I started this little history lesson thinking it would just be a collection of titles we have seen Pac-Man in, and not a lot more. After experiencing each however, I now think of it as a look back at one of the greatest mascots of all time who never could quite get out of his own shadow, but gave us a bunch of solid (if not forgettable) footprints on his journey around the top of the mountain. Sure, there are a lot of “Museums”, but those wanting purely Pac-Man and his pellet loving self are sure to find hours upon hours of score topping greatness that still can’t be beat in these hallways filled with reflection.