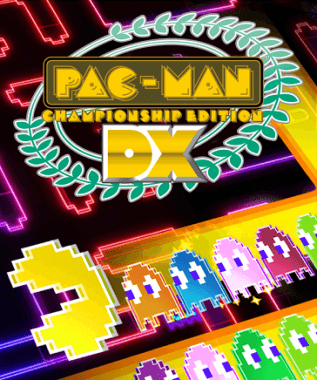 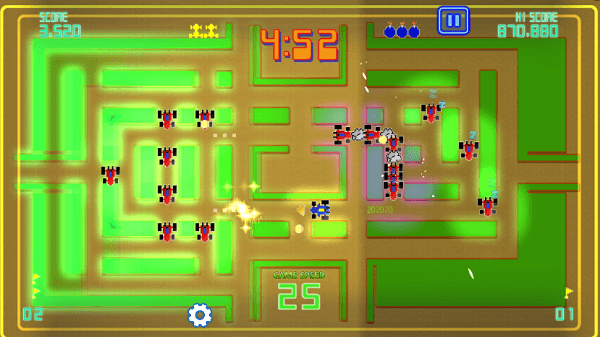 Depending on who you ask, PAC-MAN Championship Edition DX+ is the perfect step forward for the Pac-Man franchise, which started back in 1980. A lot has changed since 1980, but the advancements in the video game industry have given Namco the opportunity to improve on the gameplay elements seen in its original counterpart.

There are many differences, for the better, in PAC-MAN Championship Edition DX+ when compared to the 1980 release of Pac-Man. It’s become faster, harder, versatile, and more addicting, but like its predecessors, it all starts with the maze; Each maze is divided into two halves, the player navigates their way through the maze, eating dots, ghosts, and bonus items to gain points. When Pac-Man consumes a bonus item one one end of the map, the other half changes, causing a new path to emerge, all while evading the multitude of ghosts.

This gets more challenging and diverse with the plethora of modes and courses that ship with PAC-MAN Championship Edition DX+. If the regular five minute “Score Attack” isn’t enough, each map also has various time trials, and other game modes like “Ghost Combo” or the ten minute version of score attack. 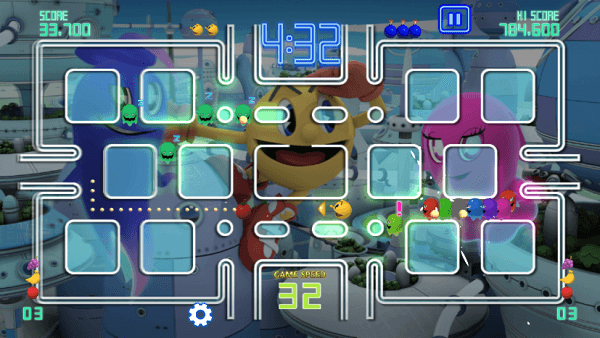 After you’ve mastered those, why not try and replay all twelve courses in the dark? “Darkness” mode is precisely that; in each pitch black maze, only Pac-Man, dots, and the ghosts are illuminated, the course itself is dark, leaving each of your moves in question with the ever changing maze.

If you’re looking to play casually, PAC-MAN Championship Edition DX+ has a mode for you; a ten minute “Free” mode with unlimited lives.

Another few gameplay mechanics sneaking their way into PAC-MAN Championship addition DX+, like “Cornering”. Cornering is the technique to move Pac-Man in the direction you want to turn, before the turn comes, Pac-Man will emit sparks and will turn that corner more sharply when it comes time. 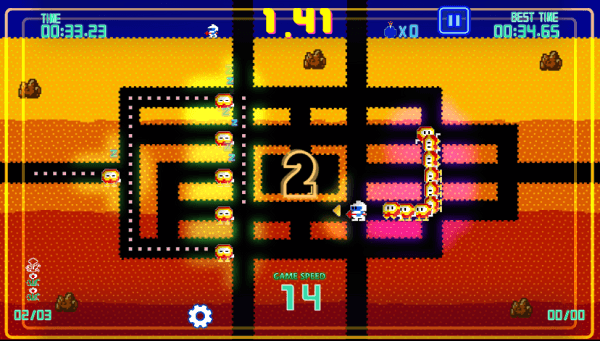 Ghosts have come back with a vengeance in PAC-MAN Championship Edition DX+, with the maximum ghosts on screen, going from the conventional four in Pac-Man (1980), to the seemingly infinite cluster of ghosts on your tail in DX+. This paired with the game’s speed adjustment makes for an exhilarating rush. In Pac-Man Championship Edition DX+, Pac-Man’s speed increases as you earn more points; going from 1-50 and the differences are noticeable.

Because of the faster pace and, sometimes, overwhelming amount of ghosts on the course, Pac-Man also has with him a set of bombs, which clears the maze of ghosts, forcing them to respawn in the “Ghost Hideout” located in the center of the map. This buys you time and is sometimes the difference between Pac-Man nomming on dots and fruits another day or leaving Mrs. Pac-Man an unhappy widow. 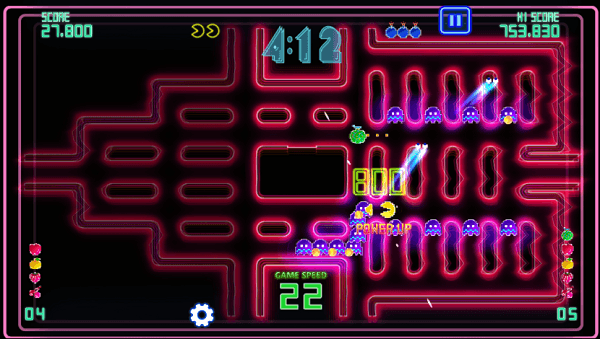 Each course can be played with twelve different visual and character choices, leading to an aray of combinations. Some of the skins include “Pack is Back”, a pack based off of the Pac-Man Television Series; “Dig Dug” and “Rally-X” also make cameos, both based off of their own games of the same name. 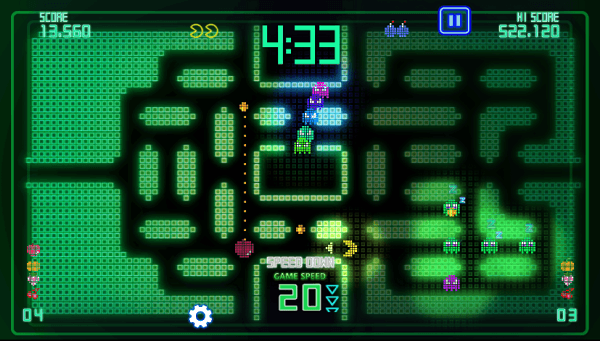 The sound effects in PAC-MAN Championship Edition DX+ are great quality and fit right in with the musical score. Along with the visuals and character skin, you can select music from a set of nine tracks, seven electronica-style tracks which fit great with pace of the game and two retro tracks for Dig Dug and Rally-x.

The fantastic Audio and Visuals mesh seamlessly together with the rest of PAC-MAN Championship Edition DX+ and it makes for an great and stimulating experience. 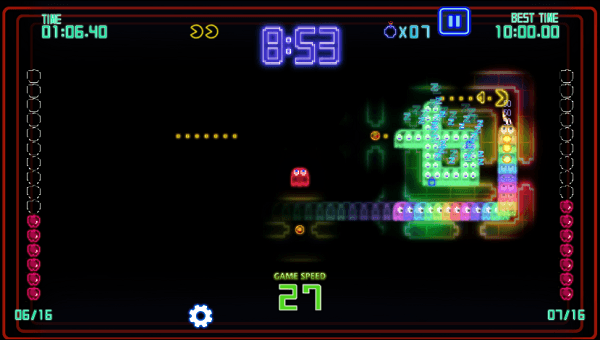 But isn’t the fact that we want more a good thing? With so much customization and a wide range of courses and game modes, the only thirst that would be left to quench is a custom level, game mode, and difficulty generator; Like the ability to take away bombs all together, grant yourself only one life per course, set the time limit to unlimited, or eat your way around a maze in the shaped of your Grandmothers face!

Maybe that will be included if they ever decide to make Super Mega Extreme PAC-MAN Ultimate Special Championship Edition Deluxe Deluxe++ 2.0.5 3D Online II: Game Of The Year Edition but until then PAC-MAN Championship Edition DX+ will have to do, and believe me, it’s quite the awesome consolation prize.