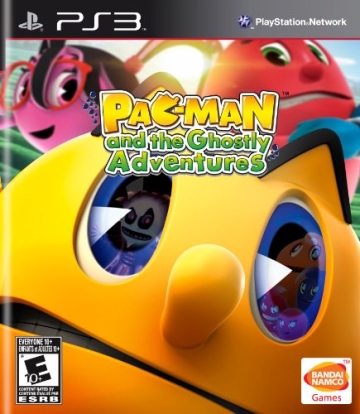 Overview
Pac-Man is arguably one of the most iconic video game characters of all time. Armed with that knowledge, Namco Bandai has tried to keep him relevant for over thirty years. With a popular children’s television show, the pellet-munching, ghost-crunching maze adventurer once again takes the stage in a fight against ghosts, but with a few new faces and powers only fans of the show would know. How does PAC-MAN and the Ghostly Adventures hold up? Is he still the go-to ghost buster or should he have stayed in the past? 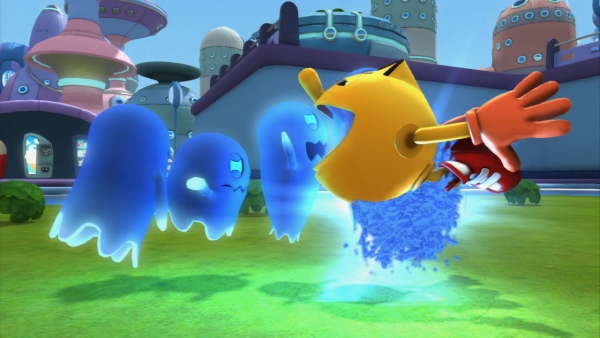 Story
Pac-Man and his friends are back in PacWorld, hanging out at the high school when things suddenly go berserk. The mayor bursts in and lets everyone know that Betrayus, the ruler of the Netherworld and all of the ghosts, has launched a full scale invasion of PacWorld. When PacWorld is saved, though, the chase takes to a series of locations that will have the golden gobbler ghost hunting as he chases down Betrayus and seeks to save PacWorld from another devious plot!

Gameplay
Gone are the two-dimensional arcade mazes of the past. PAC-MAN and the Ghostly Adventures puts Pac in a fully realized three-dimensional world that ends up feeling more like an action game like Spyro or Sonic the Hedgehog than anything else. 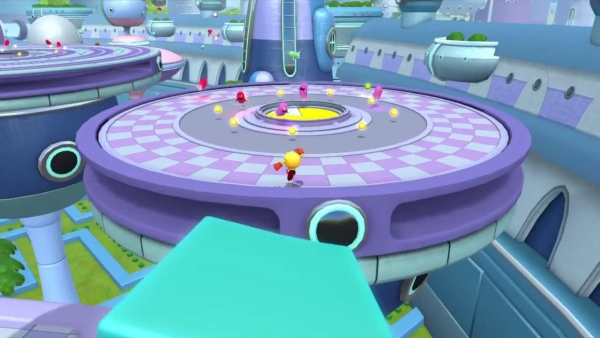 The basic gameplay puts players in charge of Pac-Man as he runs, jumps, and chomps his way through each obstacle put before him. The basic flow of the game consists of running from point to point, getting as many power pellets as you can (there are usually ~150 or more), and heading for a major piece of fruit. You’ll have to avoid or eat all of the ghosts in your way, though.

When the game starts, Pac-Man has three hearts. After taking a hit from a ghost, he’ll lose a heart. To refill his health, he can snack on cheese or hamburgers. For wolfing down a rare pie, though, you’ll be rewarded with an extra life and full health. When playing through the game, you’ll very rarely ever feel as though your life is in danger. Pac is equipped with plenty of tools for taking on the ghosts, and if all else fails, the world is littered with pick-me-ups to keep him in good health. 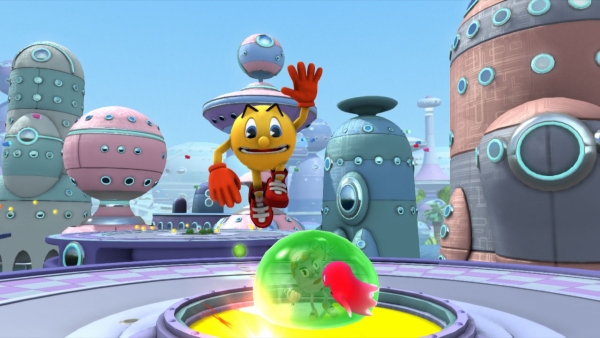 Throughout each stage, there are various power-ups. Unlike the Pac-Man your mama and daddy (and maybe you) grew up with, power pellets are no longer in style. In this new PacWorld, the Tree of Life grows “power berries.” These can bestow its consumers with tons of different powers, and Pac-Man utilizes them to the fullest extent. The power-ups in Ghostly Adventures are all based on the level you’re playing, as they’re all tied to maneuvering the levels themselves. This feels mildly restrictive on a per-level basis, but there’s enough variety in the game that you never feel as though it’s unbalanced.

On top of world traversal, Pac can use the power-ups to take out specific enemies. Use the fire ability to take out ice ghosts, the ice ability to freeze ghosts, the chameleon ability to avoid being detected by them at all, the magnetic ability to pull them to you, and much more. At first, it feels pretty odd to see Pac-Man using the sorts of power-ups his competitors would be snagging from mushrooms and gemstones, but it feels pretty cool after a while, giving him so much more to play with than scaring ghosts.

Speaking of scaring ghosts, every form of Pac-Man has two different abilities that can be utilized. Pressing the square button (or ‘X’ on Xbox) usually has him lunging forward, mouth agape to take out a ghost. That can be chained together to clear an area quickly. The alternate attack in each form, though, can be triggered with the triangle button (‘Y’ for Xbox). In his normal form, this scares all the ghosts in the area, making them easier to eat. The same button typically activates whatever special attack you have for the power-up your using. 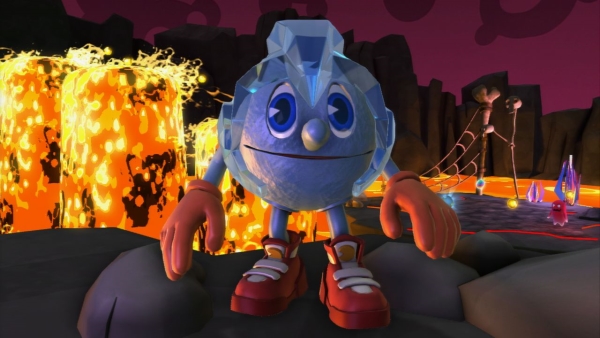 The world and level design in Ghostly Adventures is solid. You’ll play through several stages in each of the six worlds. Each world offers a fairly unique aesthetic (cityscape, frozen, volcano, etc.) but some of the themes end up getting rehashed. It’s nothing egregious, but it would’ve been nice to have a little more variety instead of reuse.

The levels themselves range everywhere from quick blasts through a few obstacles to longer jaunts through some well thought-out platforming sections, with the bulk of them ranging toward the latter. At first, disappearing and moving platforms can feel awkward as you get your land legs back, but the bulk of your deaths likely will come from missing a jump or ending up off the beaten path and falling to your doom. When you finally reach the end of a stage, a small animation will show a huge piece of fruit pop up. Pac will eat the fruit, belch out the eyes of all the ghosts he’s eaten, and go on his merry way. 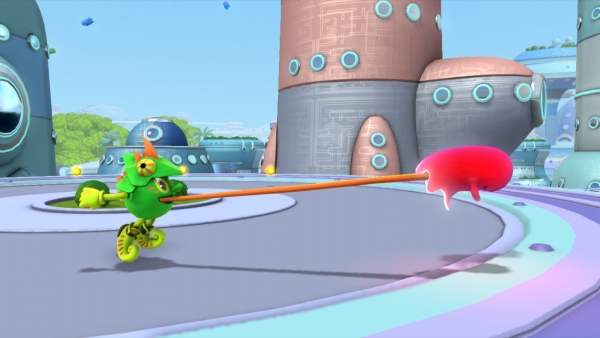 Though they’re relatively few and far between, one of the better portions of Ghostly Adventures are its boss battles. Each has a relatively simple pattern that you’ll have to figure out and capitalize on. Even with a simple pattern, things can get hectic, maintaining a sense of challenge without ever feeling unfair. They’re well designed and fun to boot.

There is a multiplayer mode built into the game, but sadly, it feels underwhelming. It puts you and three others (or AI opponents) in the roll of Inky, Pinky, Blinky, and Clyde, as they work through the original maze, gathering power-ups and working to stop Pac-Man. It’s a neat concept that a few friends may have fun with for a few minutes, but the lack of online as well as lack of variety with it means you probably won’t be going back to it very often. 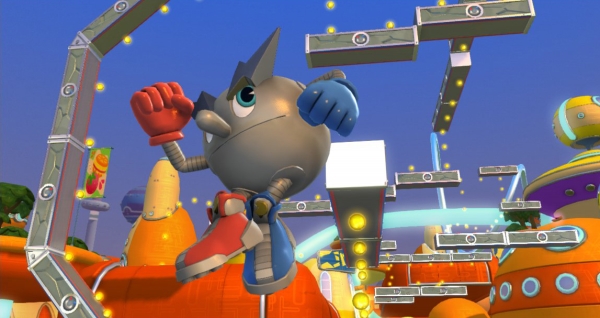 Visuals
PAC-MAN and the Ghostly Adventures won’t win any awards for its graphic design, but it’s fun to experience nonetheless. Everything is bright and colorful, giving your eyes a vibrant range of colors to drink in. It all stays true to the aesthetic of the Saturday morning cartoon as well, ensuring that folks who watch the show will feel totally comfortable with the world they’re interacting with.

Audio
The soundtrack is fairly forgettable. It does its job, but it never does so with such gusto that it leaves an impression. The voice acting feels right in line with an animated series, too. As someone who doesn’t watch the show, though, it feels really jarring to hear Pac-Man talk, as the voice behind the character is meant to put him in high school and it sounds much younger than I would’ve anticipated. Perhaps he should have been called Pac-Boy or Pac-Teen.

The sound effects are arguably the strongest design choice in the game. Namco Bandai have smartly kept the sound effects of the original game intact. Eating pellets, getting ghosts, and even dying all have a fantastic sense of nostalgia hooked in to give long-time gamers something to hold onto.

Overall
Overall, PAC-MAN and the Ghostly Adventures is a solid game. Bright visuals and nostalgic sound effects combine with well conceived, varied level design and a slew of unique power-ups to create an experience anyone can enjoy. It doesn’t do anything new or groundbreaking and the story is nothing more than a typical Saturday morning hero show, but fans of the animated series or folks looking for a fun platformer will have a good time with it.