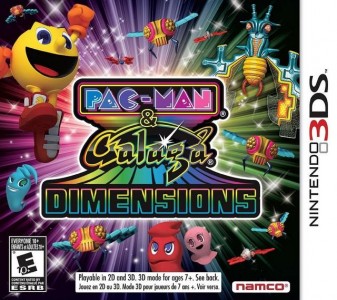 For over 30 years now, Pac-Man and Galaga have been two staples in the gaming industry. With the 3DS just starting to get on it’s feet, Namco have brought both classics together in the form of Pac-Man & Galaga Dimensions. This title features Pac-Man Tilt, which utilizes the gyro sensor to control Pac-Man in a side-scrolling platformer as well as the first-person, on-rails Galaga 3D Impact, offering a new perspective to the whole Galaga experience. If two brand new titles weren’t enough, the original Galaga & Pac-Man have also been included on this cartridge along with their popular reboots, Pac-Man Championship Edition and Galaga Legions. It’s quite a load that is sure to press the nostalgic button for most, but does all this content combined actually perform up to the standards modern gamers would expect? Here is my review for Pac-Man & Galaga Dimensions for the Nintendo 3DS. 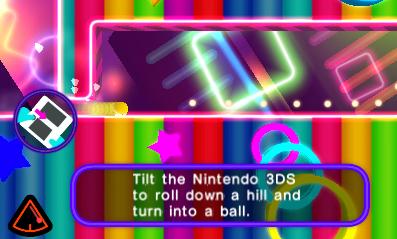 Pac-Man Tilt
When I first heard about this compilation, the first title that caught my eye was Pac-Man Tilt due to it’s platforming nature. In this new Pac-Adventure, player’s control Namco’s yellow and round mascot as he travels through a set number of stages, collecting dots and fruits along the way. While it’s a pretty standard side-scroller for the most part, the 3DS’ gyro controls were added in to enhance the way Pac-Man navigates throughout each level.

Now to actually control Pac-Man, players will need to look no further than the circle pad for movement and the A Button to jump. If there is a steep hill or small pits in a level, you can then tilt the handheld left or right to quickly turn into a ball and glide through any danger without much problem. To assist Pac-Man in his ball form while utilizing this motion technique, flippers and cannons can be found inside each stage. Think of it almost like Sonic Spinball, where the player must not only focus on the main character, but the entire environment as a whole to progress further. For instance, if there is a platform high in the air that is unreachable, the player must backtrack, gain momentum, and then roll into an upcoming flipper to catapult Pac-Man into that area. The classic “Power Pellets” can also be found, which enable the player to gobble up any ghosts that get in your way. 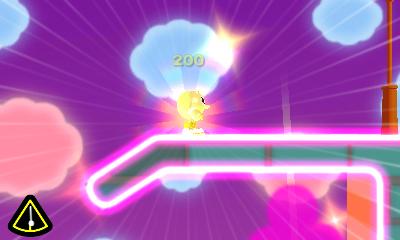 While this method of control is responsive 100% of the time, the pacing of our hero is what truly hurts the actual gameplay. When you are tilting the 3DS to make the pac-ball gain momentum and speed, there is usually a barrier or wall found soon after to bring things to a sudden stop. I understand a stop is inevitable, but Pac-Man’s stiff on-foot gameplay made me want to remain as a ball for the whole experience. Poor placement of flippers and obstacles throughout the later levels in the game also don’t properly capitalize on the speed that we see Pac-Man reach. This changes the game from being a fast paced platformer to a constant stop and go affair where the gameplay relies on trial and error for the player to succeed.

There are some fantastic ideas that all work well in Pac-Man Tilt, but I never felt like the entire game put them all to good use to deliver a fulfilling product in the end. Don’t get me wrong, this new title is still enjoyable, but the level design just does not combine the two methods of gameplay into a whole package. Even with all that said, there are a ton of collectibles to snag and high scores to achieve within the game, so most should not have a problem getting in at least a few extra hours of gameplay after their first playthrough.

Galaga 3D Impact
Take the hectic gameplay of Galaga, flip the perspective into first-person and add in some 3D visuals and your final product would Galaga 3D Impact. This on-rails shooter places players in a ship, where the main object of the game is to be pulled throughout various levels while destroying each enemy or boss that gets in your way. All of the enemies we know from the original are also back with newly redesigned models, which all look fantastic and fit perfectly in this re-imagining. 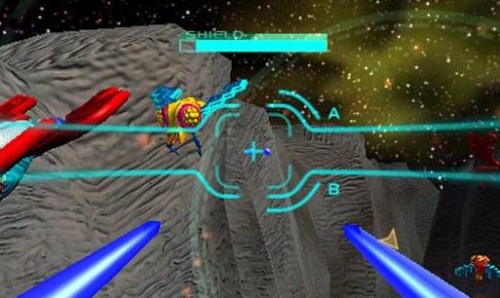 Being on-rails, controlling your ship comes down to Galaga 3D Impact’s use of the gyro scheme. This works a bit like Face Raiders, where the player must move the handheld in various directions to get a full view of oncoming enemies. Shooting is a bit of a two button affair for the most part, with each ship equipped with a standard shot and a tractor beam that can be charged to pack an extra punch onto larger foes. As you progress, enemies can be absorbed to upgrade your arsenal, allowing for a much wider variety of weaponry.

I enjoyed Galaga 3D Impact well enough as everything functions as it should, but much like Pac-Man Tilt, the game felt like it was just a large mini-game rather than a new version of the classic. Those who are on-rails shooter fans are sure to love the control scheme and the nostalgic world that you are pulled through, but aside from obtaining high scores, there isn’t a whole lot of reason to go back to 3D Impact after completion. 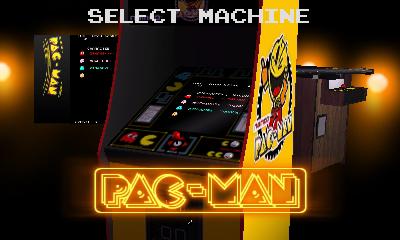 The Tale of Four Ports
The new offerings in Pac-Man and Galaga Dimensions may not be perfect, but interestingly enough, the additional ports found within this compilation bury any of those flaws with their pure nostalgic bliss. The original arcade releases of Pac-Man and Galaga look and play just like they did in the arcades, but now in a much smaller form with the 3DS’ stick used for movement. How do you possibly enhance such classics? With the addition of new achievements and online leaderboards (which all of these titles possess). I found myself addicted instantly to both and going back and forth just to unlock these new achievements. It’s odd how something so small can add so much replay value, but these add-ins worked wonders from my experience and are sure to let new players discover what made these games legendary. Pac-Man and Galaga also feature three different perspectives to play in, with a cocktail table, a classic stand-up arcade unit, and just the raw game screen. The cocktail & arcade skins each utilize the 3D to give a sense of depth, which makes each appear as if you were looking down into a classic machine while playing. It is a nice effect, but I found myself turning off the 3D once the appeal wore off as it really wasn’t necessary.

Those who crave for something more recent will also be happy to know that Pac-Man Championship Edition and Galaga Legions have also been included within this compilation. If you have never played either, each take the core ingredients of their predecessors and add in some fresh mechanics to make the gameplay much more addictive. 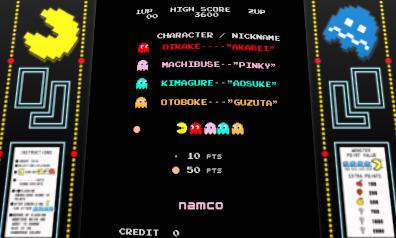 Pac-Man C.E. for example starts players out in a standard maze, where extra dots are revealed by collecting fruits and the remaining pellets on the screen. The main goal is simply to continue at this pace while collecting the highest score you can reach before the timer runs out. The control stick works well to navigate Pac-Man through the maze, making the whole experience mirror that of it’s console brethren. Galaga Legions is also like it’s original counterpart, but with large waves of enemies that the player must defeat to continue on. The player can also throw out miniature versions of their ship to assist in these chaotic situations. Most of the time, one enemy will result in an entire wave being destroyed, so a lot of the gameplay boils down to finding a proper strategy and one simply handling themselves amongst the chaos.

Graphics/Audio
When it comes down to how these games actually appear visually, I would imagine most would be pleased with the results. Each of the four ports add in a subtle 3D effect, making the colors “pop” and add a bit of depth to each experience. As I mentioned, this effect isn’t entirely needed for the two originals, but it is a nice feature to toy with if you are looking for more of an arcade-like session. Galaga Legions & Pac Man C.E. are the true winners out of the ports though in this area, as the chaotic animations never miss a bit and both are a pure delight to play with their neon-lit presentations.

Pac-Man Tilt does not use the 3D aspect due to the gyro controls, but it still captures the charm of the series well and makes up for the lack of 3D with it’s bright and cheery graphics. Galaga 3D Impact does however utilize the extra dimension of imagery, which plays into favor of the gameplay and at many times it can appear that enemies are flying right out of the screen. 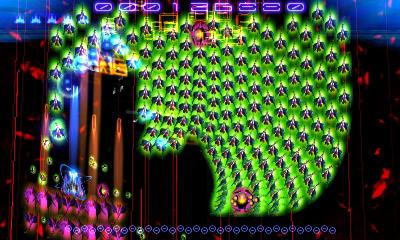 In Pac-Man and Galaga Dimensions, each port blares their familiar tunes in a crisp fashion over the 3DS’ speakers, sounding just as you would remember. Pac-Man Tilt’s music blends well with it’s upbeat environment, with classic sound effects added in to make it at least feel like a Pac-Man game. I can say for Tilt though that the new high-pitched voice for Pac-Man was very unfitting and sounded like more of a Pac-Kid rather than a Pac-Man. Galaga 3D Impact’s best audio qualities were also found in the retro sound effects, but the soundtrack did feel a little closer to it’s heritage compared to Tilt.

Overall
As a whole, Pac-Man and Galaga Dimensions pays homage to both classic franchises well by delivering four solid ports. The two new offerings of Galaga 3D Impact and Pac-Man Tilt however just do not feel up to par with the classics and while they do utilize the 3DS’ extra functions well, they simply do not feel substantial enough to warrant a purchase on their own. Now if you are just wanting to play Pac-Man and Galaga on the go, then by all means this is the definitive compilation for any 3DS owner. If you don’t fall into that category though, it might be best to pick up Namco’s latest when the price cools down a tad.

I Give Pac-Man and Galaga Dimensions: