Overview:
SNK PLAYMORE has released another one of its classic arcade titles onto the PSN.  In Prisoners Of War you control a military prisoner who breaks free from his cell, and must fight through waves of incoming enemies in a traditional side scrolling model.

Story:
The storyline in SNK’s P.O.W Prisoner of War, is that you are in a War camp, and need to escape. You somehow start off with some explosives to blast open your cell door, and thus your adventure begins. As you fight through the camp you eventually find your way to the communication room to call your comrades for a transport out. Since you don’t find any maps along the way I assume the protagonist already knows the layout of the camp, and exactly how to get to the communications room. In a more recent game I would also question how this soldier managed to get captured and put into a P.O.W. camp, as you have the ability to beat up endless waves of soldiers with just your fists. Due to the nature of this title I feel it is irrelevant to question the depth of the storyline as it is an arcade game aimed at getting people to play over and over again, and not attract people with a complex and interesting storyline. Though it would have been nice to have a small explanation of why you are there, and the general escape plan. 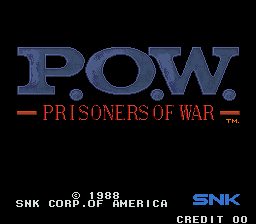 Audio & Visual:
Considering the time at which this game was originally released, the visuals are quite pleasing. The character is animated well, with smooth connecting movements. This also applies to the enemies as they move smoothly over the screen, rather than being robotic, or just still moving pictures as many arcade games present their enemies.

Audio within this title was mediocre at best, the sound effects were over used, and the background music becomes just that, sounds that lack to grab your attention and seem to fade away. Due to punches and kicks having a standard sound effect they become very over used and begin to become irritating, although there is a new background track for each situation, without looking for it, it is barely noticeable.

Gameplay:
If you like button mashers, P.O.W. is your game, if not be prepared to lose interest fairly quickly. The game play is based around the ability to punch, kick and jump. They are your basic commands, with the occasional item, such as a knife or gun, though you can only throw your knife. The game play is the key to any arcade game, and P.O.W. fails in this aspect. Being your typical side-scrolling model, you are constantly bombarded with wave after wave of enemy, of increasing difficulty. With no power ups, and increasing stronger, more numerous enemies this game soon becomes impossible.

On easy the enemies are eventually able to take off half your health with just one hit, and when you’re surrounded by 5 or 6 enemies you soon find yourself without a leg to stand on. Although the developers try to make this game more interesting by bringing in a variation of enemies, they do not allow your character to utilise your enemies’ weapons. For example at one point motorcycle enemies are introduced, though when you finally kill them their bike automatically explodes. Although this is a good break from the endless waves of just soldiers with knives, it would have added another layer of entertainment if your character could have turned the bike into your own tool of destruction.

Overall:
P.O.W. Prisoner of War is another classic arcade title from SNK PLAYMORE’s golden age. During its initial arcade release this game would have been how many people spent their Friday night. With its lack of depth in the story, mediocre audio and button mashing tendencies it fails to stand up to the expectations of the modern gamer.