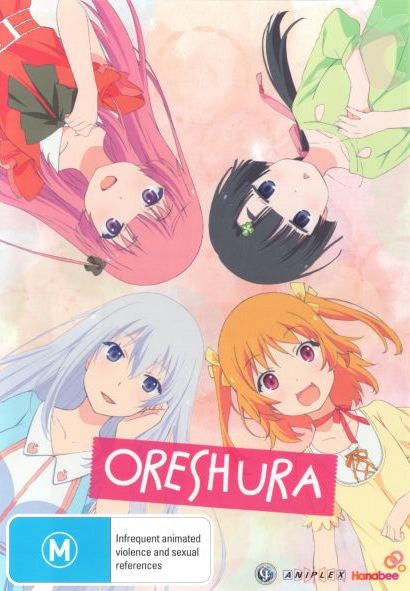 Overview
High School can be a difficult time for anybody. With all the classes and tests and books, it can be a tad overwhelming at times. Now add the complications of a relationship into the mix…well, more like four relationships if you want to be specific. With the chaos brought about by four high school girls in love with love, our hapless protagonist will have to try his damndest not to lose himself in their countless ploys to earn his affection. After all, love is an unnecessary distraction when planning for your future. Isn’t it? 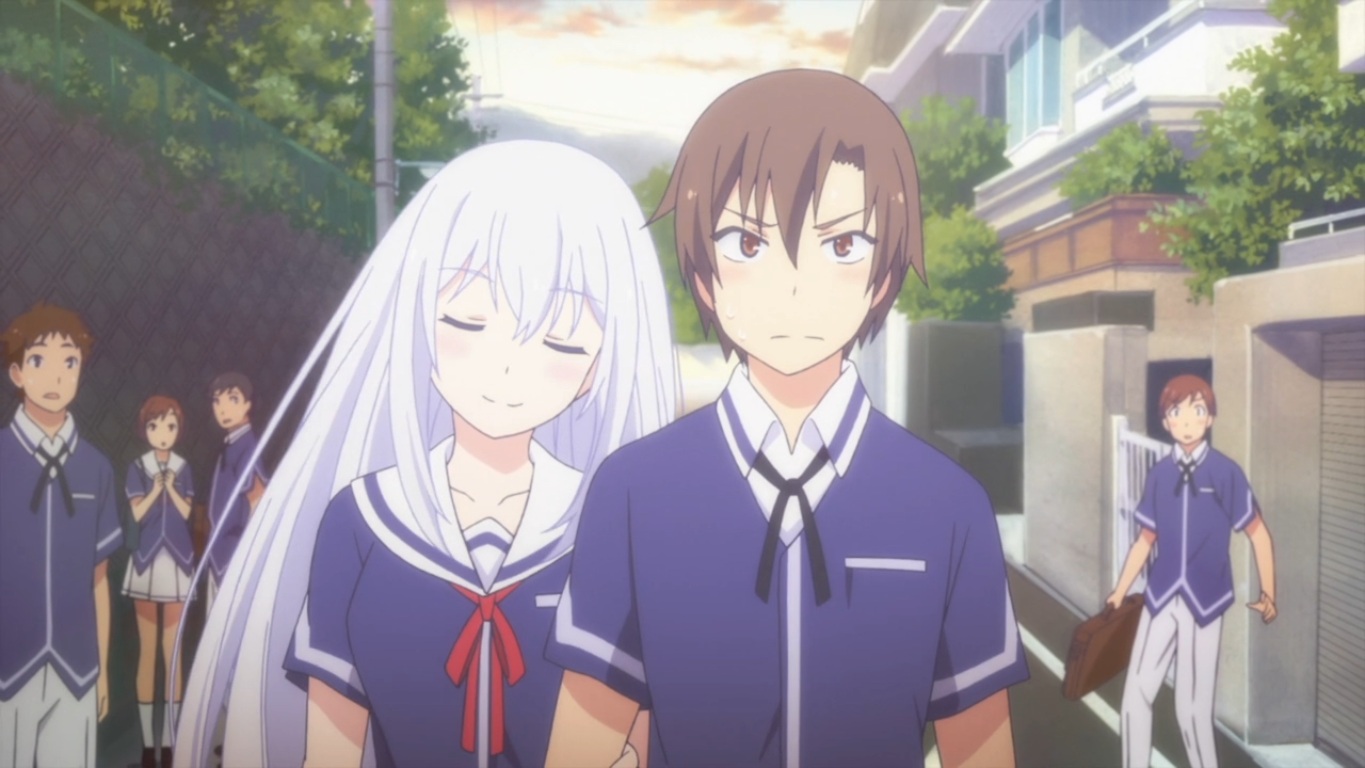 Story
Meet Eita Kido, a studious high schooler with grand ambitions. See, he wishes to become the top student in his school, therefore cementing himself on the path to becoming a doctor. Naturally he must work hard for such a lofty goal and therefore has no time for distractions. But it wouldn’t be much of a comedy anime if Eita just studied now would it? Enter Masuzu Natsukawa, one of the most beautiful and popular girls at school. Naturally this means that she is the object of desire for damn near every guy she meets. All but one in fact. Longing to escape the onslaught of date requests she receives daily, the devious schoolgirl hatches a plan: Get a boyfriend…or at least pretend to get a boyfriend. Thus Eita is dragged into a world he desperately wishes to avoid: love…kinda.

As the series progresses, Eita gathers a few more girls who quite openly proclaim their eternal love for him, much to his chagrin. Joining Masuzu is the energetic Chiwa Harusaki, shrinking violet Himeka Akishino and the epitome of tsundere Ai Fuyuumi. As the girls discover that they are not alone in their quest of seduction, they begin to utilise their best assets to “win” his love. Surprisingly for a harem style anime however, this rarely results in them using their bodies, instead relying on their existing relationship with Eita…though that means vastly different things for each girl. The most commonly utilised is Chiwa’s poistion as Eita’s childhood friend. Seriously, that phrase is like kryptonite to the other girls, creating no shortage of jealousy and anger. If anything can be said about this series, it’s that each girl definitely has a unique connection to Eita, which serves to add some diversity to the series. Some. 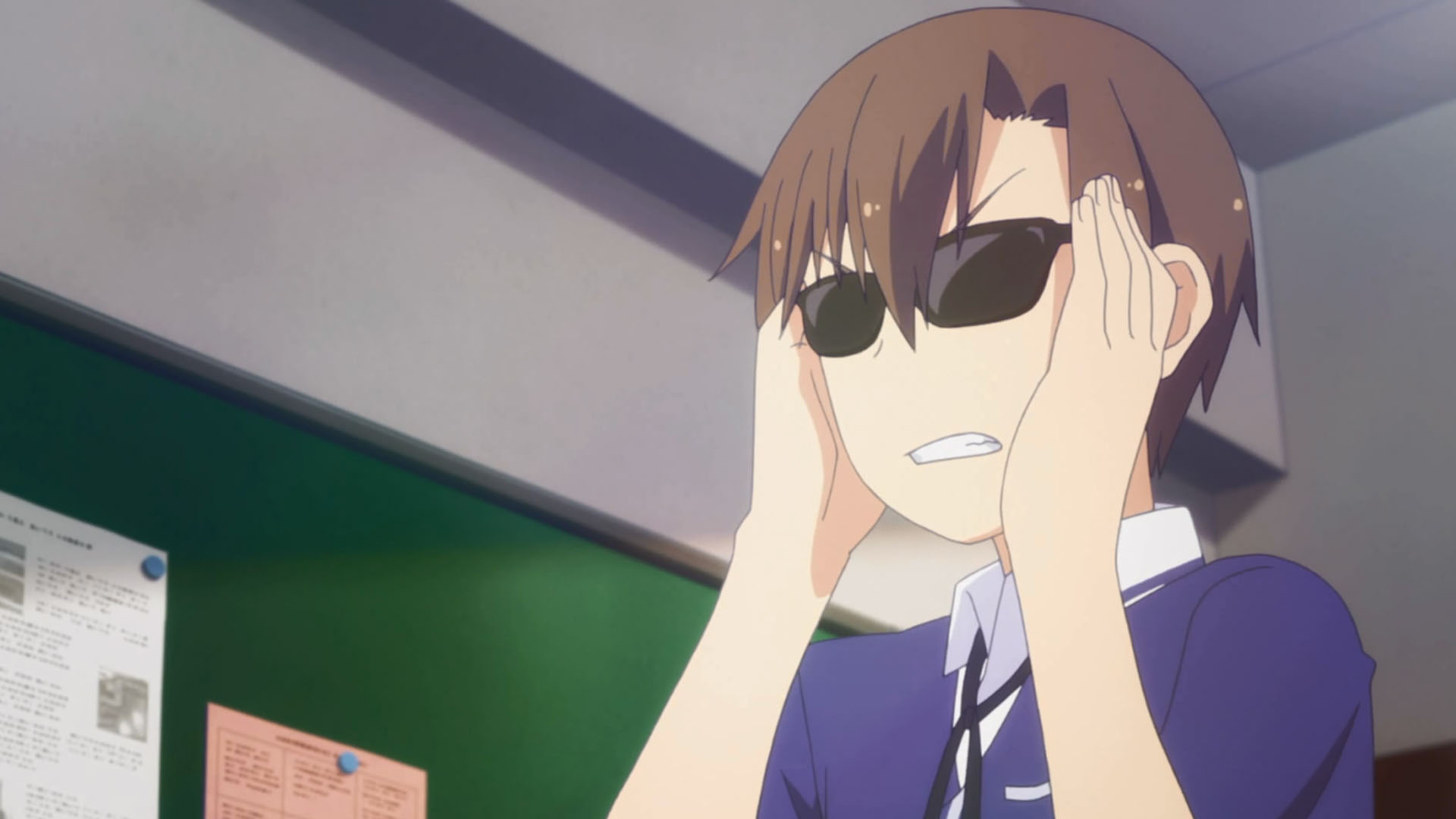 Stylish. No wonder all the girls are after him.

The sad thing about this series is that it possesses a great deal of potential that goes untapped. Though the series hints at the girl’s backstories, they are never presented with any substantial detail. Pretty early on we learn that Chiwa suffered a debilitating accident that ended her prospects as a kendo practitioner. Though we do see a flashback that expresses the effect this had on both her and Eita, we never really see how it develops in the present day. In fact her injury is all but forgotten, as Chiwa continuously utilises her kendo skills, something that is not entirely wise given her condition. So detail isn’t incredibly high on this series’ checklist. Made quite obvious by the fact that this is one of the more explored backstories. In contrast, poor Himeka is left greatly underdeveloped, presenting arguably the weakest case for belonging with Eita. That being said, her unique perception of what a true relationship is based upon could have made her the most interesting of the four girls. Instead she comes across as outspoken and strange. Though considering those around her, she’s definitely in good company. Even Eita himself is left rather unexplored as the series progresses. Though he initially claims love to be for fools, he succumbs pretty quickly to the opposite sex. Though this could have been due to his stance as anti-love being a cover for his own insecurities (which it most likely was), the lack of detail removes any true sense of emotion from his 180 on affection. His goal of becoming a doctor also immediately takes a back seat to the shenanigans caused by his would be lovers. It’s still there, just kinda ignored for large amount of time.

Delusion is one of the most prevalent themes throughout the series. Beginning with Eita, whose teenage musings led him to create the alter ego of Burning Fighting Fighter, it is slowly revealed that he is not alone in his ideas. Some of his stories may even be considered tame compared to some of the things the girls come up with. Generally played for laughs, there are a few heartfelt moments where these fantasies are used to bring characters closer together. It’s sweet, in a crazy kind of way. It is also during these moments that we see just how much Eita cares for the girls, despite his vehement denial of love.

Unfortunately there’s just so many plot threads left loose by the end of the series. Threads that, if followed, could have led to some truly touching character development. Though the series does show glimpses of this, some spontaneous burst of comedy usual brings things back to its basic formula. In one particularly climactic part of the series, it looks as if the story will deviate from its formulaic approach and finally provide some definitive development…then it doesn’t. After a few minutes of drama and decision, everything is brought right back down to zero and the harem humour continues. The fact that the series almost rises above the norm is almost worse than if it never even tried. It shows that the series is aware that it could be more than it is…it just chooses not to. 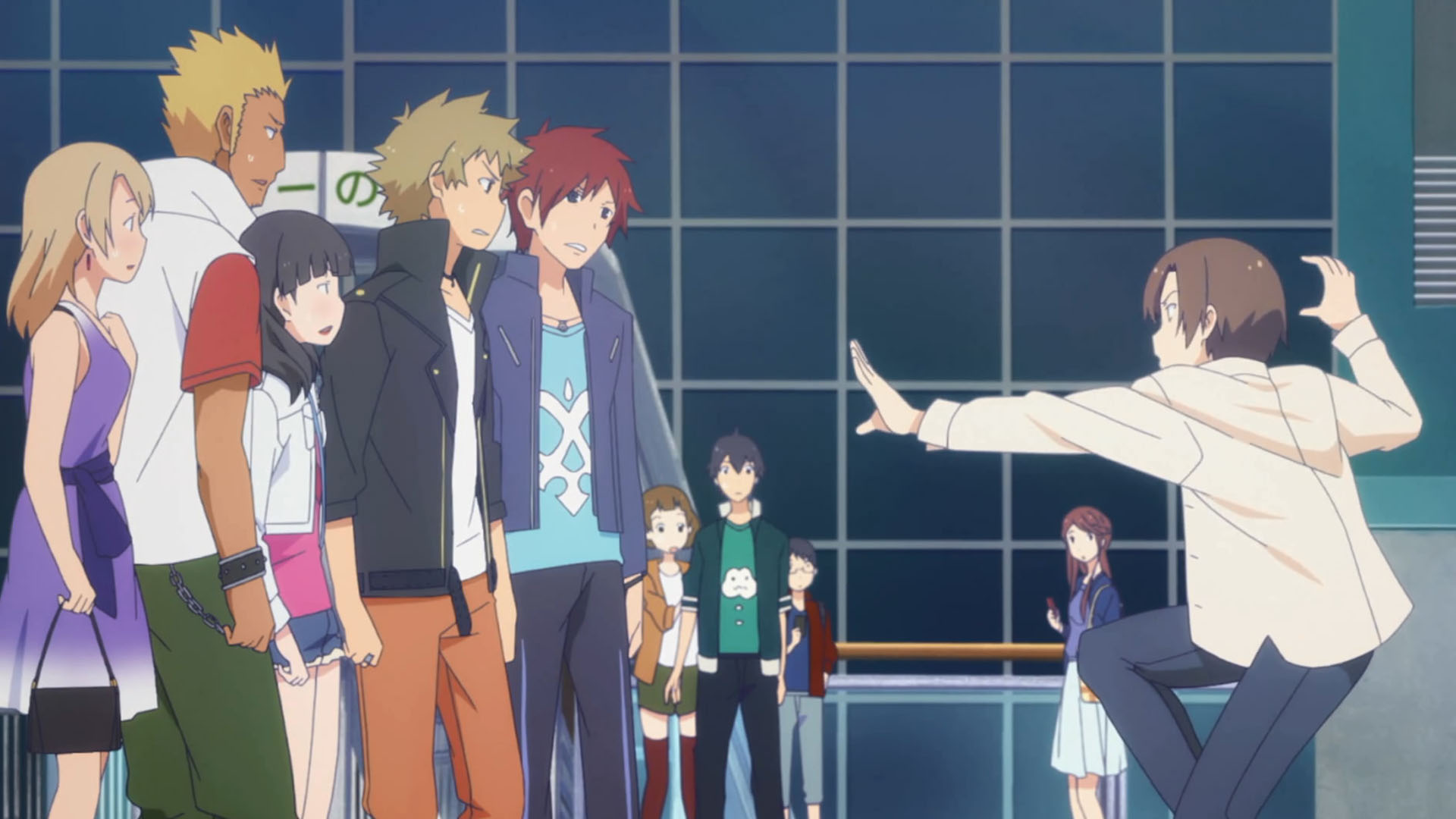 This can only end well…

Visuals
The series caries an inherently vibrant feeling in almost every scene. In addition the the unique hair colours that each of the four girls possess, they will generally wear outfits to differentiate themselves from their competition. Both the colouration and style of said clothing also generally serves as a visual representation of the girl’s personality. For example, the morose Masuzu often dons simple white clothing, contrasting the bright and bubbly Chiwa. Even if they are predictable personalities to place in such a series, the visual differentiation helps keep things interesting to look at.

Overall, the visuals of the series can best be described as safe. Not excessively bad, nor excessively good. Characters possess good design and their animation is fairly fluid. However, there is rarely any kind of intense movement from any character. In fact, any time there is an explosive burst of energy from a character, it usually occurs off screen. Again, whilst played for humour, it is quite easy to see how scene cuts are used to avoid animation. Whilst it does suit the somewhat subdued nature of romance the series attempts to display, it would’ve been nice to see the characters a little more animated. Though Ai is prone to explosive movement whenever her tsundere urges kick in. I’ll give her that. The lack of fluidity was however used to great effect whenever Eita’s fantasies were brought to life. The moments when his childish illustrations overlapped with the world served as a humorous contrast to the straight lace student he strives to be. The fact that they were brightly coloured also prevented you from ignoring them. No matter how much Eita wished them to stop. Poor guy. 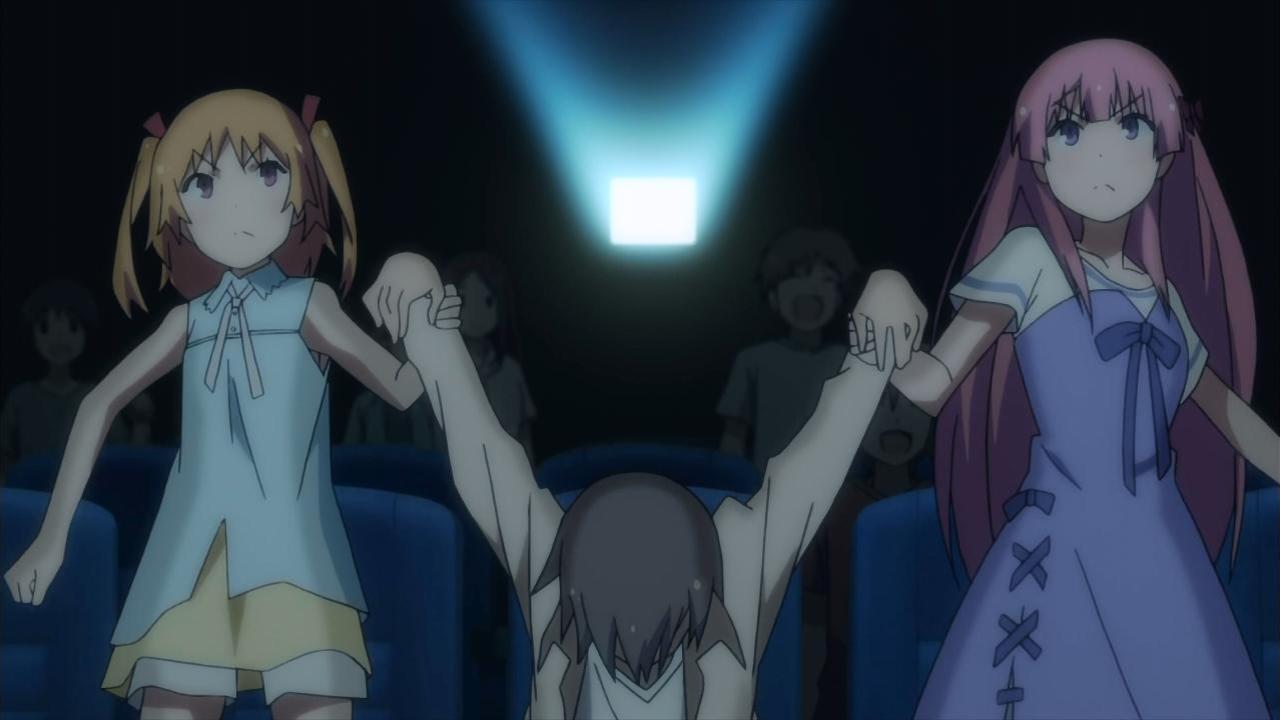 A pleasant day at the movies

Audio
As it never received an English dub, the series is naturally presented with its original Japanese voice cast. As you might expect from their appearance, each of the girls possesses an intrinsically cute voice. Though in Ai’s case that statement is true only half of the time. In what might be considered strange for a harem series, the girl’s actually spend more time trying to talk with Eita than they do trying to force themselves on him. As such, dialogue serves as the central source of character and plot development, individualising the girls even further.

One truly standout element of the series soundtrack would have to be the opening theme song. Just as poppy and cute as you’d expect for the series, it is in fact sung by the seiyuu for each of the four girls. Though it may seem like a small touch, the song immediately introduces you to the voices that you will be hearing throughout the show, whilst at the same time focusing the series even more intently on its rather small cast. Seriously, there really isn’t much of a world beyond the presented love pentagon.

Extras
This release is pretty light on the extras. Included are your average textless versions of the opening and ending themes, along with a small collections of TV spots advertising the series. Other than that you’ve got trailers set to entice you to watch a few other anime series. Pretty standard really. 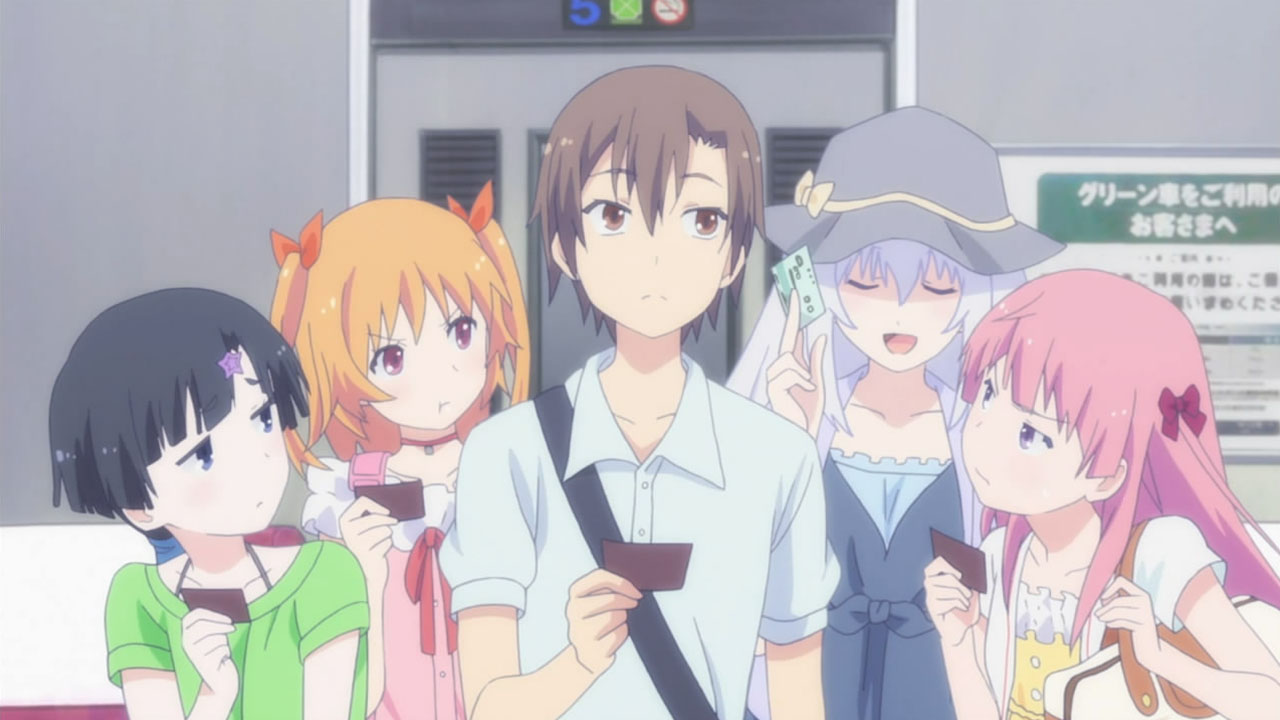 Overall
All in all, Oreshura is a series that just cannot break the mould and escape its position as a status quo kind of anime. Devised as a harem story, Eita is prevented from focusing his attention to any major degree on a single girl, lest the series end immediately. Despite his best efforts, Eita’s relationships with each girl progress at a similar rate, which, whilst showing some plot progression, effectively keeps everything right where it began. Though certain moments lead you to believe Eita has emotional leanings towards one girl, another situation will immediately arise with another, interrupting the feeling immediately. However, that being said, Eita may perhaps be the most oblivious character to ever exist. Unlike some series where the girls are too embarrassed to even say their feelings out loud, the girls of Oreshura openly profess their love for Eita right from the get go. Though the fact that his harem includes a close friend, a liar, a daydreamer and a tsundere girl may explain his hesitation to take what they say at face value. All things considered, Oreshura is a series that, whilst not disappointing to any major extent, does not truly stand out as a great series. There were plenty of references to JoJo’s Bizarre Adventure for some reason though. That was pretty cool.