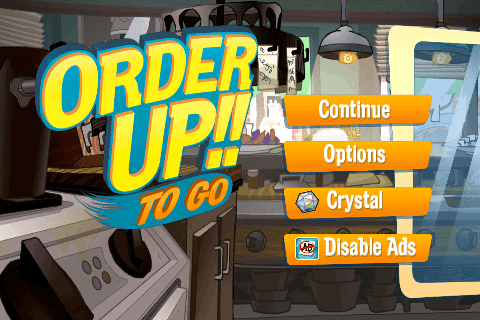 Back in 2008, SuperVillian Studios released “Order Up!” on the Wii and was received well in the industry. They then followed up in late 2011 with PS3 and 3DS versions. And finally they are bringing the franchise to iOS.

Basically, it’s a cooking game with time management elements mixed in. But it’s not just another Cooking Mama clone; it’s gameplay actually bears some resemblance to actually being a restaurant’s chef, managing which customers to serve first and timing the different dishes to cook to perfection and not set the place on fire. 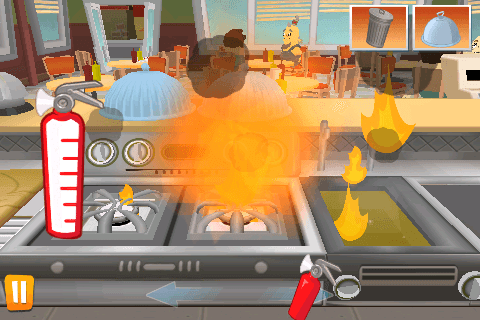 You’re a chef, and you’ve just flown in to some sort of island resort in search of a job. Starting out in “BurgerFace”, a fast-food drive-in restaurant, to learn the trade and prove your chops (sigh), you then move onto bigger and better dining establishments.

A lot of aspects of running a restaurant have been covered, including buying ingredients before the day starts, impressing the local critic to get more customers, and adding new dishes to the menu. 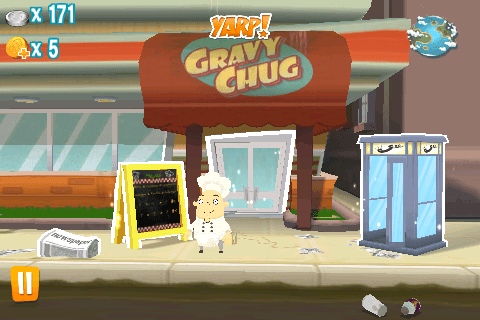 The gameplay largely involves cooking. You’ll take orders from customers and commence chopping, frying, and stirring, doing your best to deliver dishes quickly, still hot, and to a high level of culinary excellence.

To start preparing the food first you tap on one of the dish orders displayed across the top of the screen. Then you pick one of the ingredients you want to prepare first. Some will simply sit on the hot-plate, others will drop into the deep fat fryer, whilst veg and the like will wait for you on the chopping board.

Each activity requires some sort of interaction, a gesture or rhythm-based action, to prepare the food in question. They each have a meter letting you know how the preparation is progressing, and how well you are preparing the ingredient. Once the ingredient is ready, you hit the plate button to put it aside and then swipe across the bottom of the screen to continue finishing off the rest of the elements of the dish. 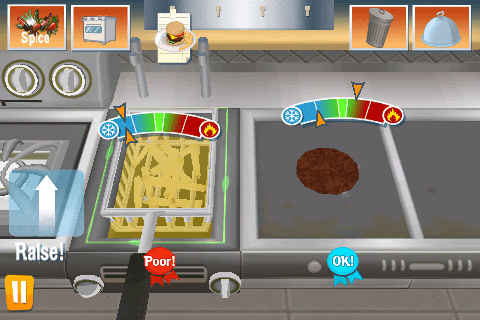 So for example, a burger meal consists of a burger, lettuce, tomato, and a portion of fries. The burger takes a while to cook through, but you have to flip it half way through. The fries take about half as long to cook but can just sit in the fryer until ready. The lettuce leaves need to be peeled, and the tomato needs to be chopped. Each have their own timings and gestures, so after a few goes at a dish you figure out the most efficient way of preparing that particular meal.

Once you’ve finished the order, tap the dinger to deliver it to the customers. Each customer will pay you based on the quality of their dish. Then there are the “regulars”… special, particularly colourful characters that will pay extra if you spice their meal just the way they like it. They don’t just straight up tell you, though. They’ll hint at the kind of thing they like and you have to figure out what particular spice they’d like.

Once a day is finished, you’ll get a “Yarp!” grade, based on things like quality of dishes, average time to make an order, things like that. All the items are clearly marked and explained. Some are a little cryptic… but clearly cryptic. 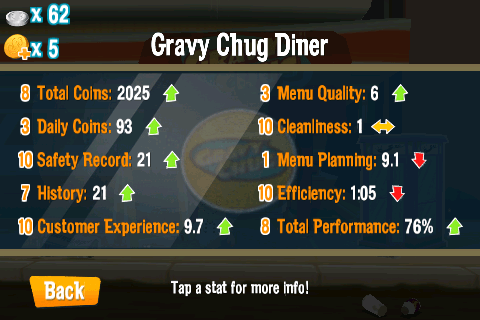 You can pay to upgrade your kitchen to cook things faster, clean up the restaurant to avoid visits from the Health Inspector or a rat infestation, or hire “wacky” assistant chefs (currently unavailable). There’s also a telephone booth that will let you play a selection of minigames (also currently unavailable). 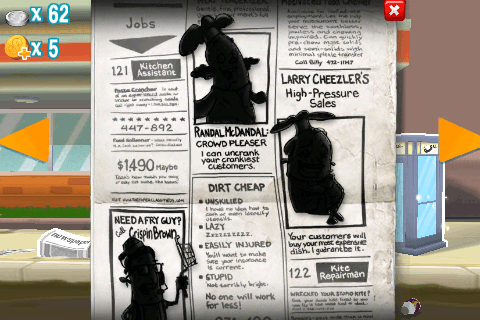 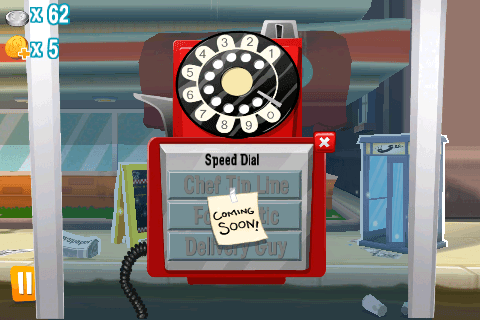 Whilst I’m not usually into these types of games, the combination of simple gesture-based cooking and management of preparing the different ingredients of an order, makes this a joy to play, and somewhat addictive at that.

There are (mostly) static ads displayed in the loading screens, with an option to pay to remove them on the main menu. The game also has integration with the Crystal social gaming network with achievements and leaderboards built-in.

The visual style is very much in the same vein as the game’s predecessors; a bold, colourful, cartoony look with humorous character designs and a simple and helpful user interface. The state of each preparation is easy to see and understand, and everything has been carefully designed to make it obvious what is going on; an essential requirement for a game with so many components the player needs to juggle. 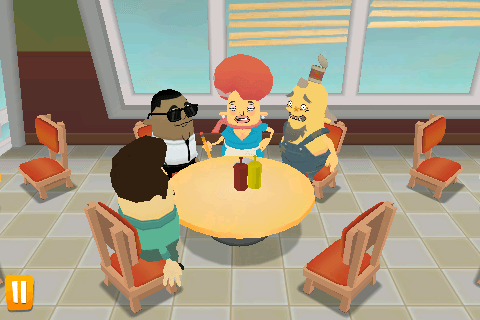 The voice acting is great, too, though only the waiters, waitresses regulars, critics and Health Inspectors actually speak. The sound effects are also spot on, with each type of preparation having it’s own, instantly recognisable sound to go along with it.

And then there’s the luscious in-game music. Created by Robb Mills, the guy behind the Fat Princess soundtracks, the music fits the gameplay perfectly and serves to make the whole experience that bit more enjoyable.

Whilst the gameplay is of course paramount in a game like this, the look and feel of “Order Up!!” makes it easy, even inviting to play.

I give this game a hearty recommendation. If you like the time-management style of game, or are a fan of Cooking Mama and the like, then you’ll absolutely love this game. And if you’re not into either of those two genres, the carefully balanced combination of the two might just work for you.

Either way, this game deserves a solid…